An Afternoon at the Arena


After seeing the Gladiators I finished up yesterday the kids were pretty stoked to get their mitts on them and play so I thought I’d set up a quick game with them this afternoon. (We also finished reading a book about Gladiators yesterday – so they were SUPER stoked to play with them!).

As Song of Shadows and Dust has some stats for Gladiators I used that. I told the kids to pick out 150 points of gladiators and we’ve have a go at it. The Boy picked out three Burly Samnites. The Girl picked out a female Retiarius and Dimachaerus. 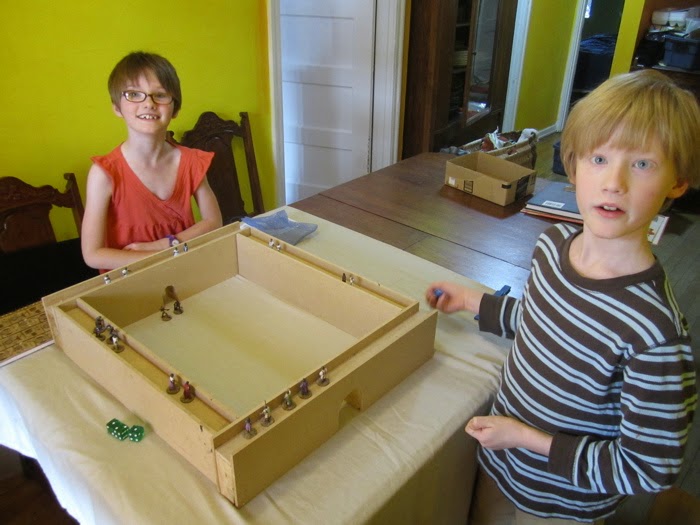 The kids setting up their Gladiators 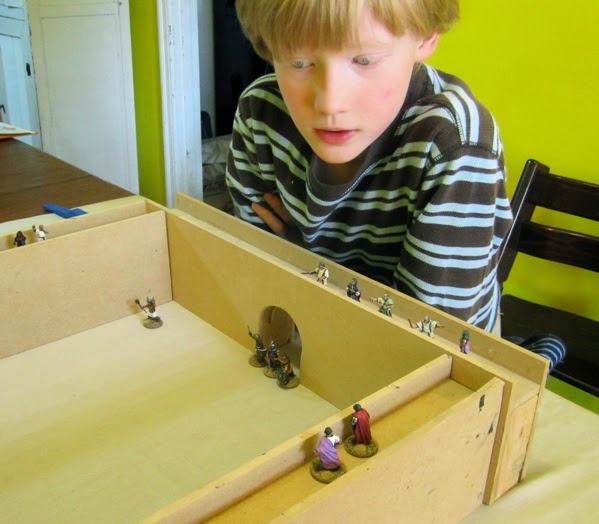 The Boy and his burly Samnites 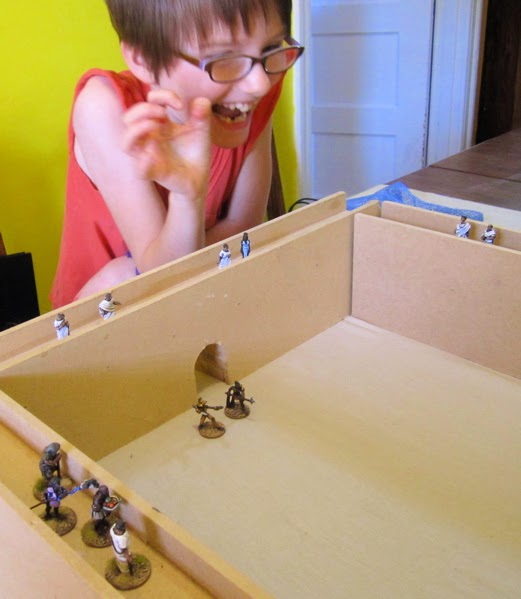 The Girl (who fights dirty – bless her socks!) 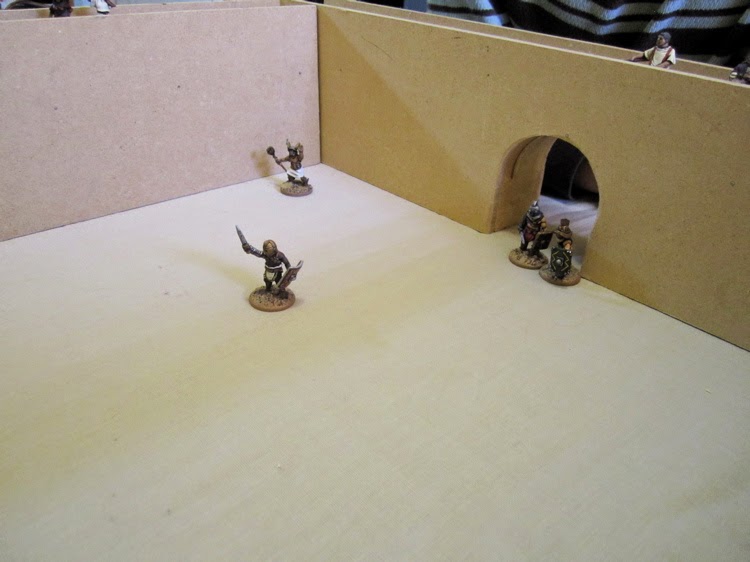 The Boys won initiative and Nubius went charging out into the arena… Then Baucelmyus rolled a pair of ones and that was the end of the turn! 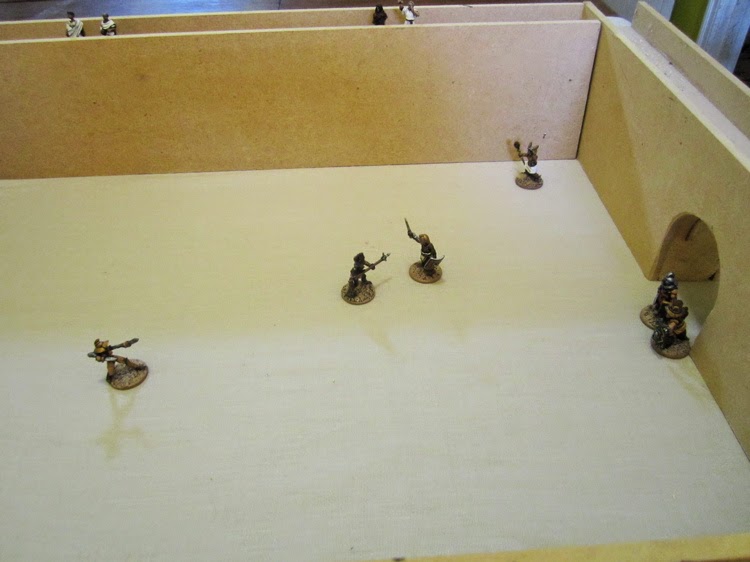 The Girls weren’t quite able to capitalize on this lone gladiator… but their moves were bold and decisive. 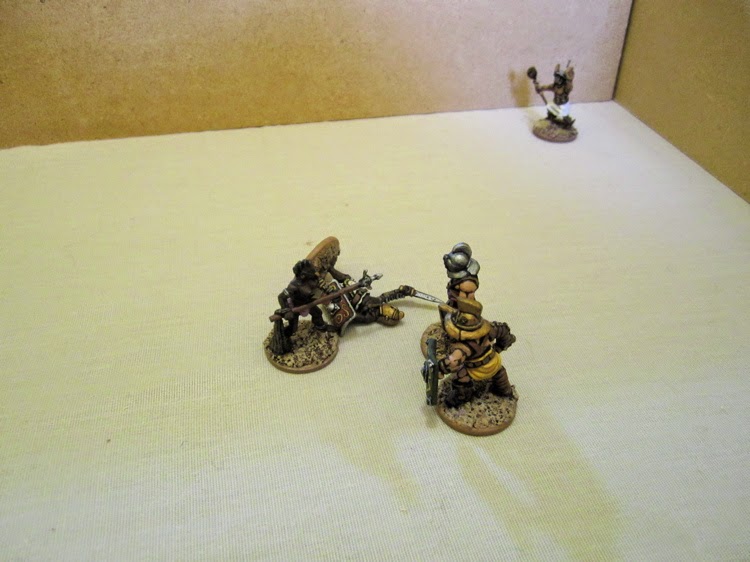 On the second turn Baucelmyus and Herkdotes rushed up to support Nubius, but didn’t quite get there in time. Nubius moved in against Assariya the Retiarius and was landed on his ass for his troubles! 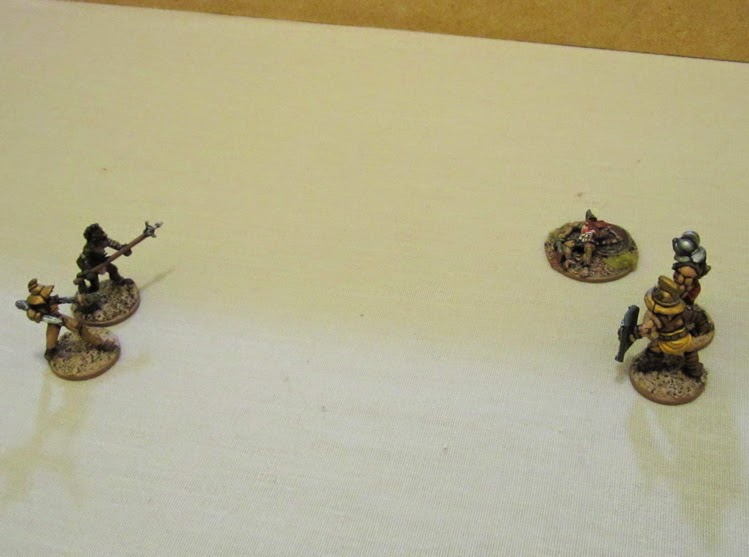 On the girls turn Assariya the Retiarius finished off Nubius with a Power Blow and retired back to where Minerva the Dimachaerius was. 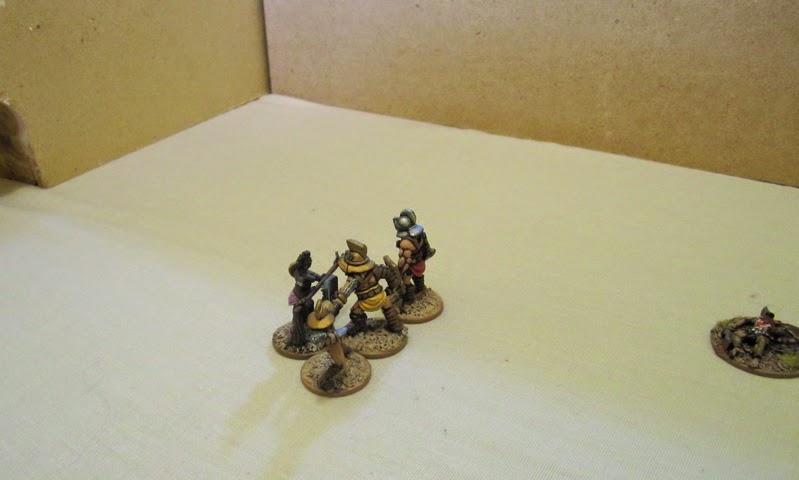 Baucelmyus and Herkdotes rushed forward again but were unable to make contact, the more nimble women circled around and teamed up on Baucelmyus – he was able to hold his own until the boys turn… 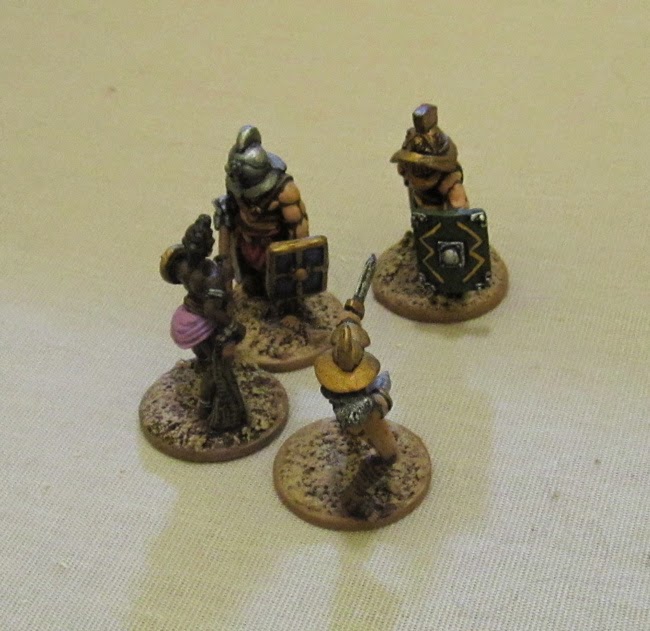 Herkdotes attacked Minerva but was driven back by his furious blows. Baucelmyus and Assariya went at it hammer and tongs neither able to land a telling blow and neither willing to give any ground! 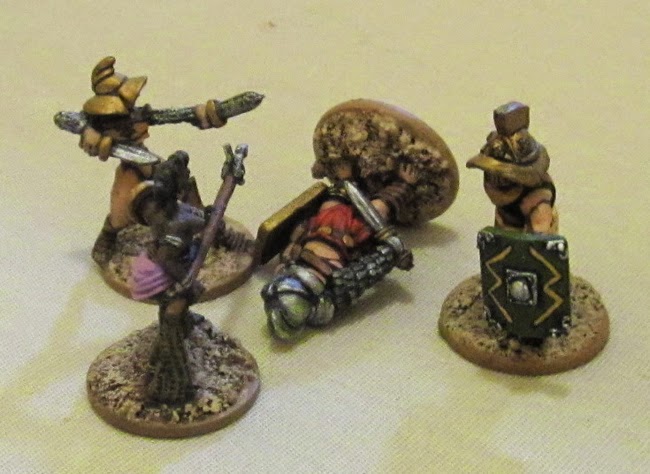 Minerva quickly stepped around Assariya and stabbed Baucelmyus in the side ending his days. 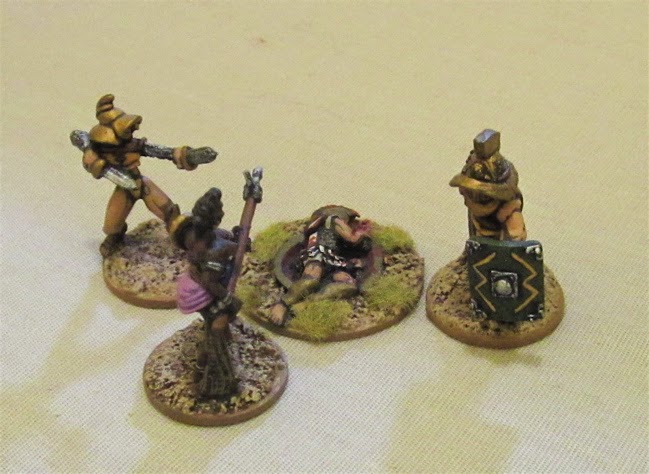 And so it was that Herkdotes found himself facing the two ferocious female gladiators on his own. 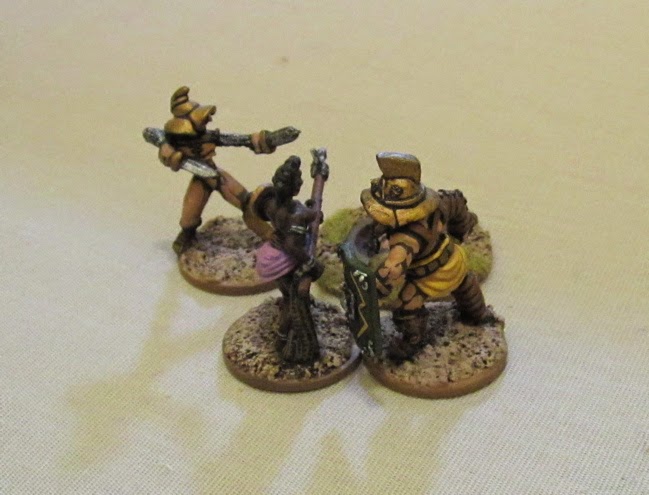 Not one to back down from a challenge, Herkdotes charged Assariya. 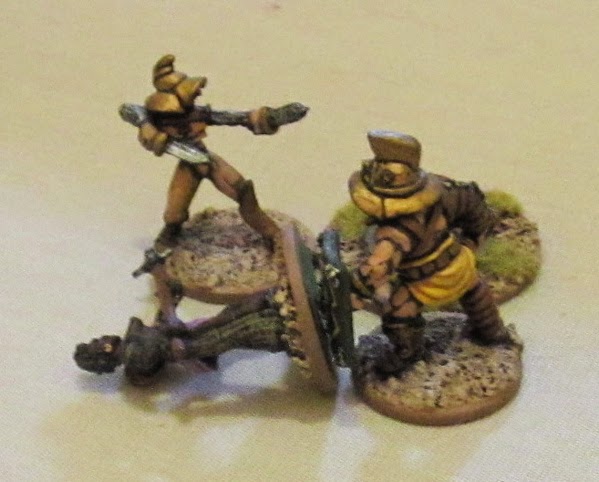 And knocked her on her ass. 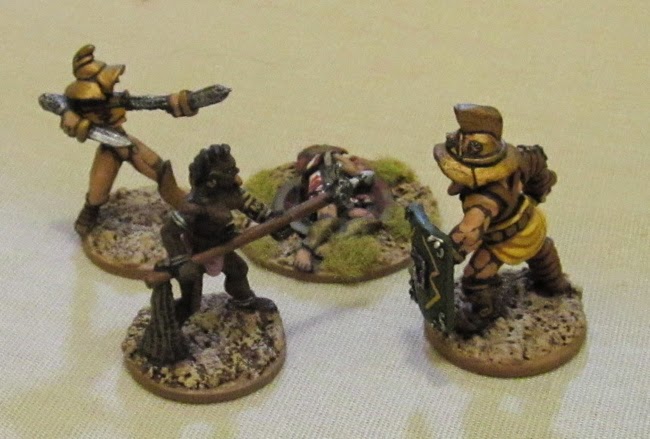 She was too quick, though – before he could finish her she sprang up and back him back. 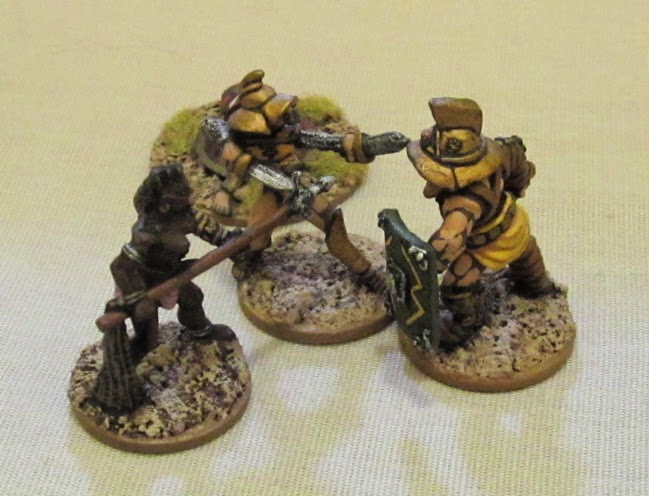 Minerva followed up with a flurry of furious blows… 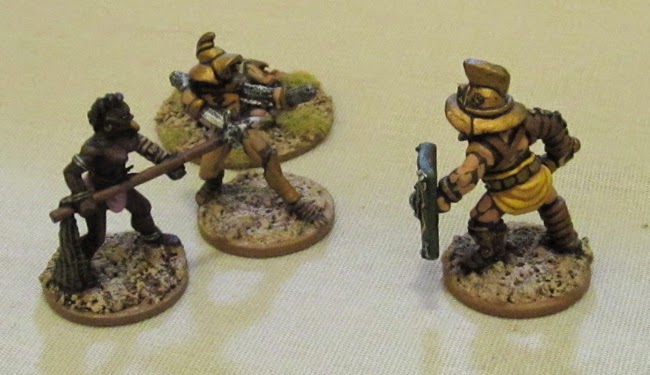 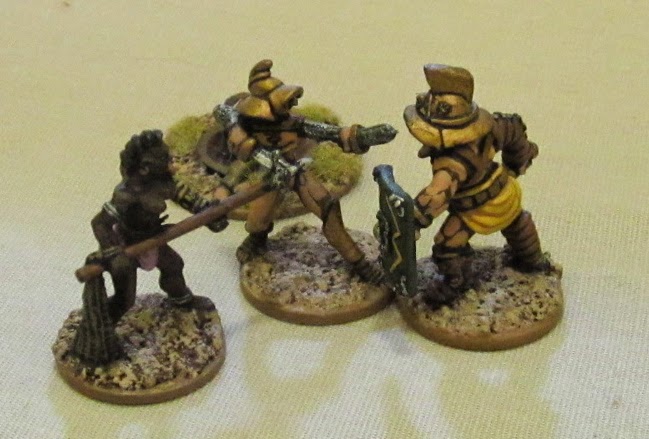 When Herkdotes got his balance back he charged in again… 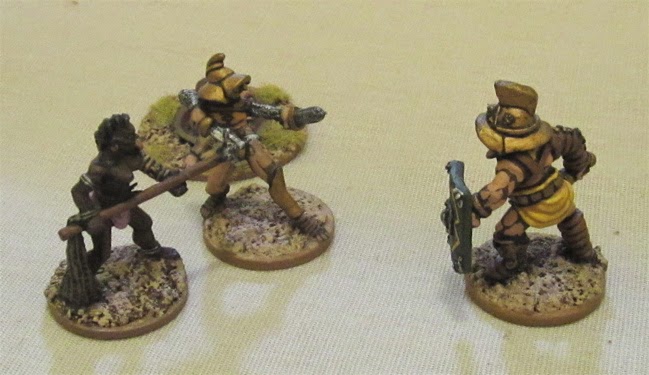 …and was again driven back. 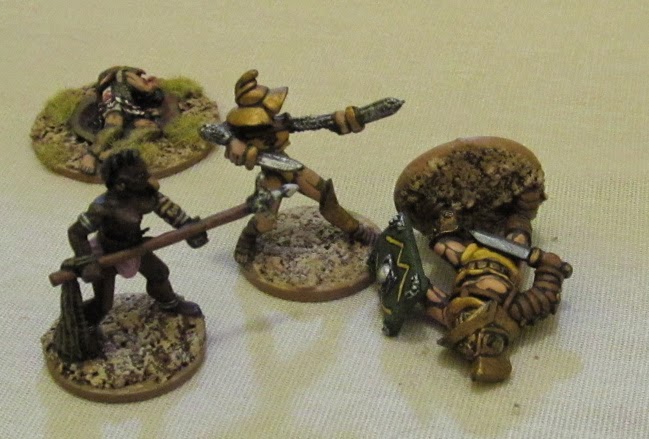 Minerva flashed in and, while Herkdotes was off-balance, tripped him up and cast him to the ground. 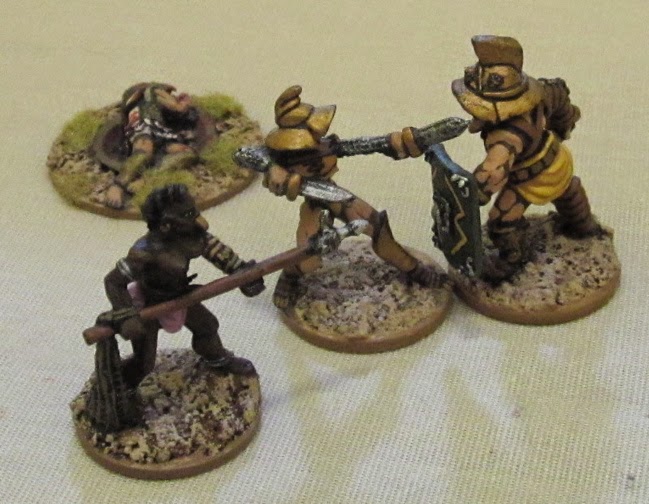 Desperation and adrenalin sped his reflexes and Herkdotes sprang up as quick as he fell. 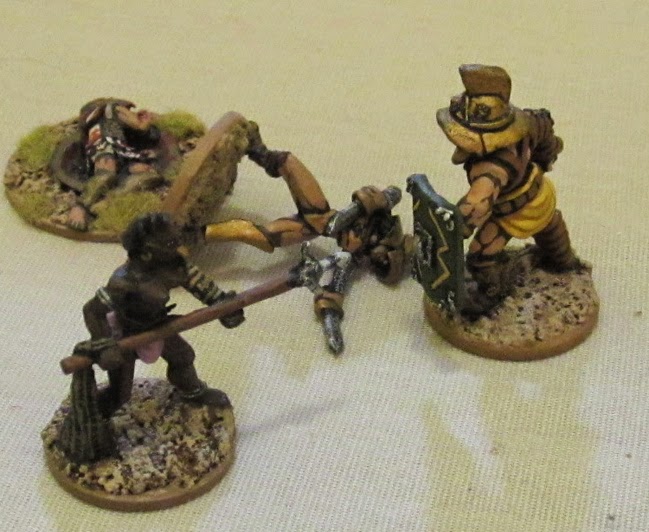 Surprised by this sudden movement, Minerva was also caught off balance and knocked to the ground. 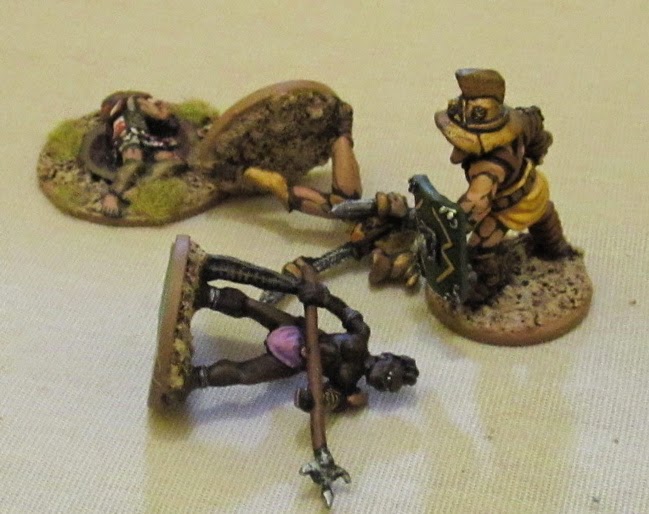 Before Herkdotes could finish her, Assariya sprang into action and cast her net at Herkdotes, but Herkdotes used brute force to smash into her with all his weight behind his shield and bowled her over!

With both his assailants knocked down, for a fleeting moment Herkdotes thought he might get out of this alive. 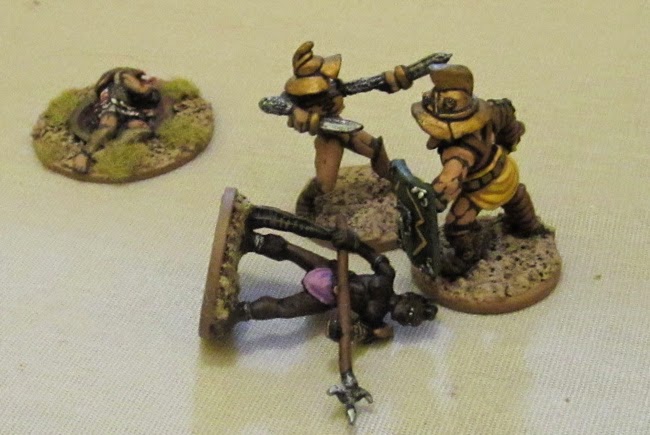 Quick as a flash, Minerva was up again… 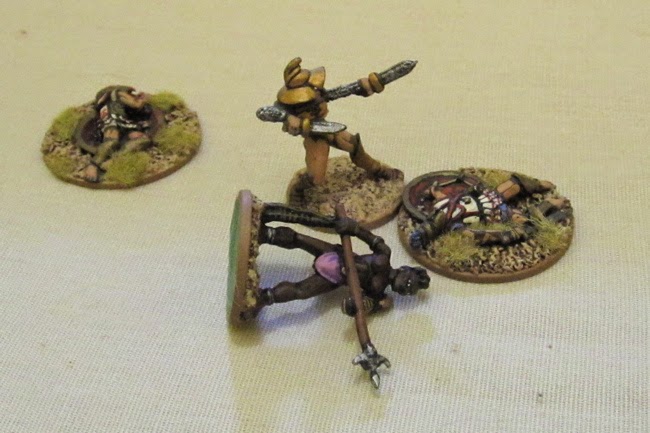 …and blindsided Herkdotes with a half-dozen quick stabs from her blades. 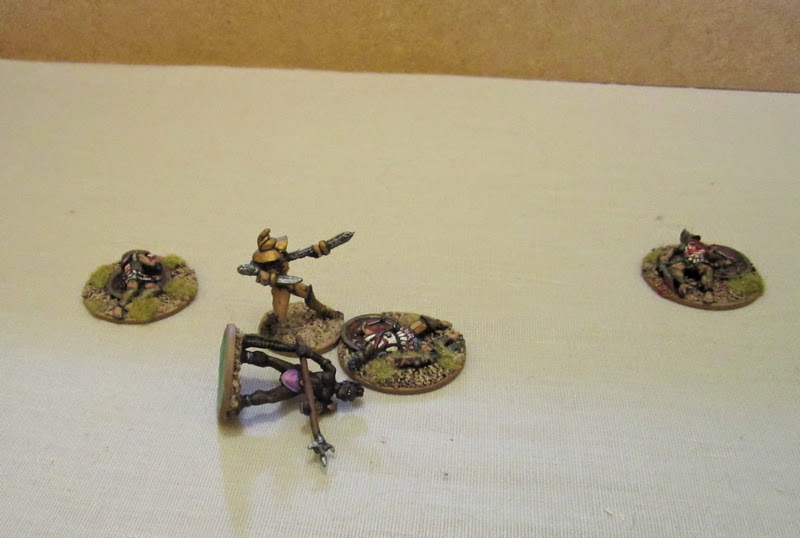 The vanquished Herkdotes, seriously wounded though he was, did not die outright and plead for mercy. Having fought so well on his own against two attackers mercy was granted and he was dragged off to the Medicus to see if he could be saved…

Fun times! This worked so much better that the Savage Worlds we used in our previous Gladiatorial Campaign. So much faster and much more dynamic!

We may play another game this evening – or perhaps tomorrow afternoon…? Either way, there will be more game reports in the near future!
Posted by tim at 5:01 PM

Labels: Gladiators, Song of Blades and Heroes, Song of Shadows and Dust