We decided last night to play a game and it’s been a while since we played straight up Song of Blades and Heroes, so I threw together this quick little scenario for the family….

The lesser known Greek Hero (unknown, really) Penthylos once sought to make himself rich and gain glory by invading the land of the Amazons. “There just a bunch of Women,” he thought, “We shall be back by the Anthesteria and rich beyond imagining – with gold, and slaves, and perhaps even a wife or two!”

He took with him 100 of the best Greek Hoplites he could buy with his meager means and set off across land and sea to the lands of the Amazons.

Things did not go well for him.

And so it was that he found himself and the last remaining men of his expedition running ragged, hunted, through the wild mountains of Amazonia desperately trying to shake their pursuers and make their way back to more “civilized” lands.

If they could make it through this one more pass they would be beyond the reach of the Amazons and safely on their way back home…. Or so they hoped…

The Greeks start in one corner and must exit the opposite corner. Half the Amazons are guarding the pass, the other half are in the pursuing force and will enter on the Amazons second turn.

To win the greeks must get half their forces off the opposite corner of the table and Penthylos must be among those that escape. If less than half the Greek force escapes or Penthylos is killed or captured, the Amazons win.

Just to keep the Greeks going, any slain Amazons will reappear at the entry point for the pursuit force the next turn. 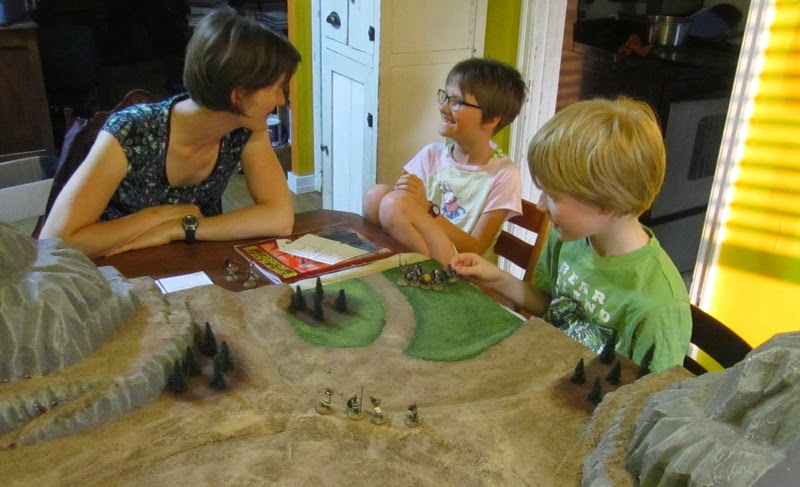 The Boy played the Greeks and Amanda and The Girl split the Amazon forces. 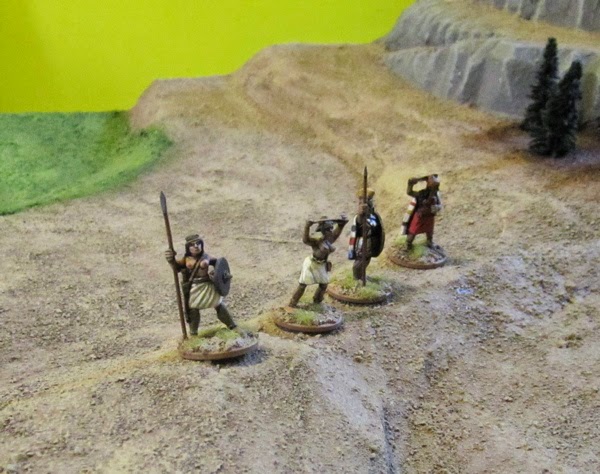 The Small party of Amazons guarding the pass on the border of their lands. 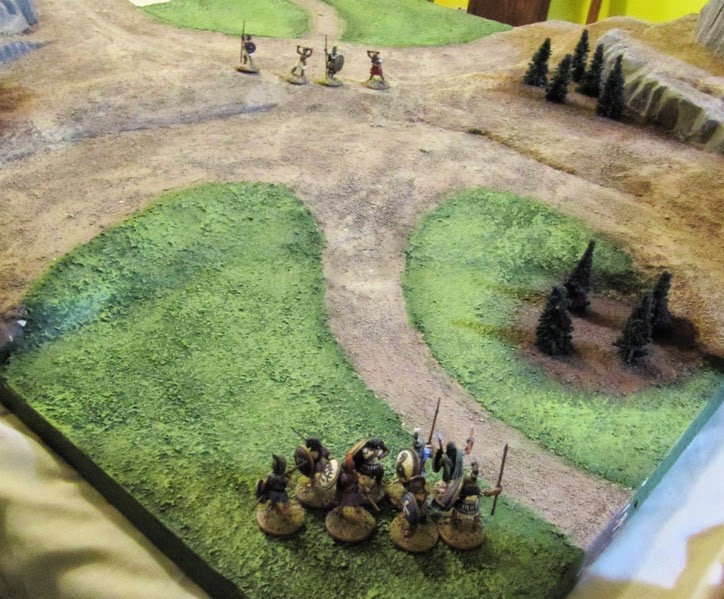 The Greeks, The Amazons in their way, and Freedom Beyond! 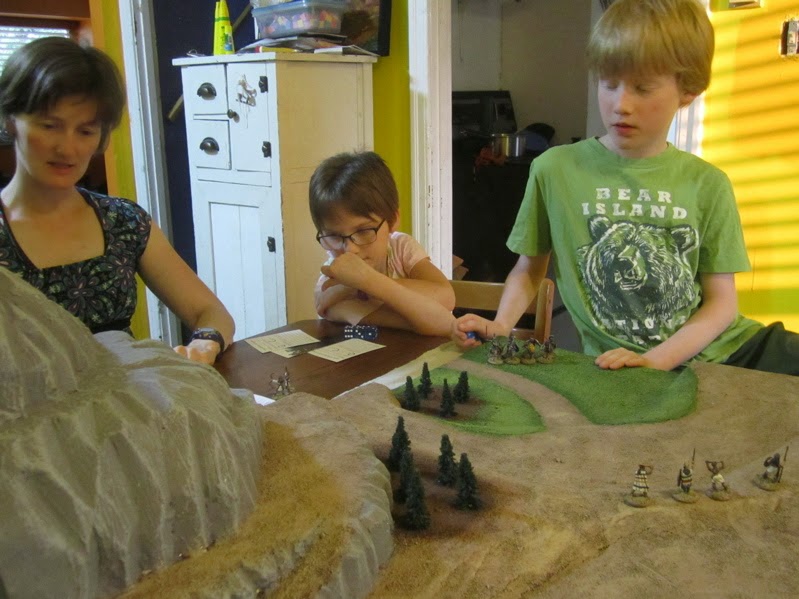 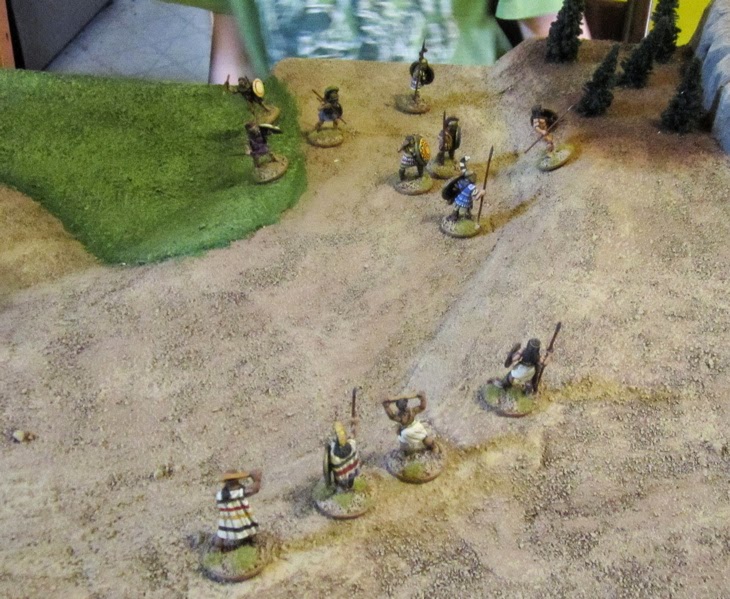 The Greeks make a break for it, trying to swing wide around the Amazons guarding the pass. I should have made part of the rough ground bad-going…

On the Amazons end of the turn, one slinger moved forward and flung a stone off at one of the Greeks which bounced off his shield. Then the Girl rolled a Turn-Over and that pretty much settled the game… 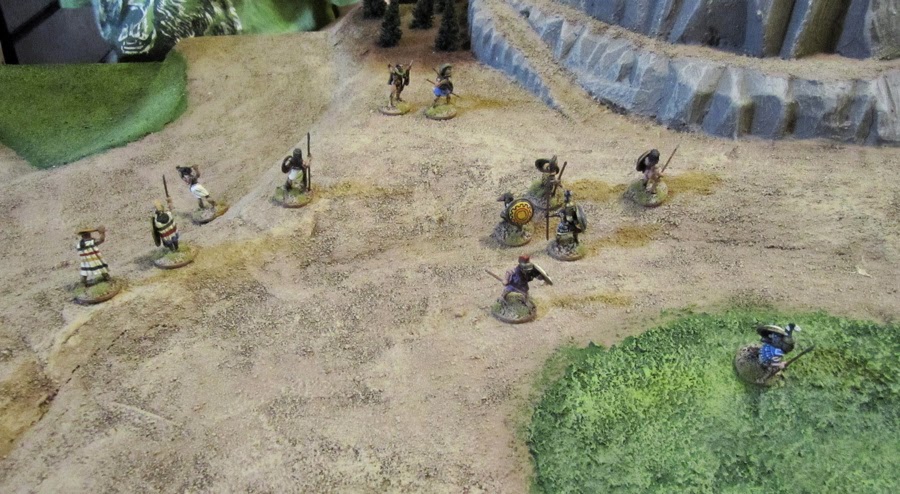 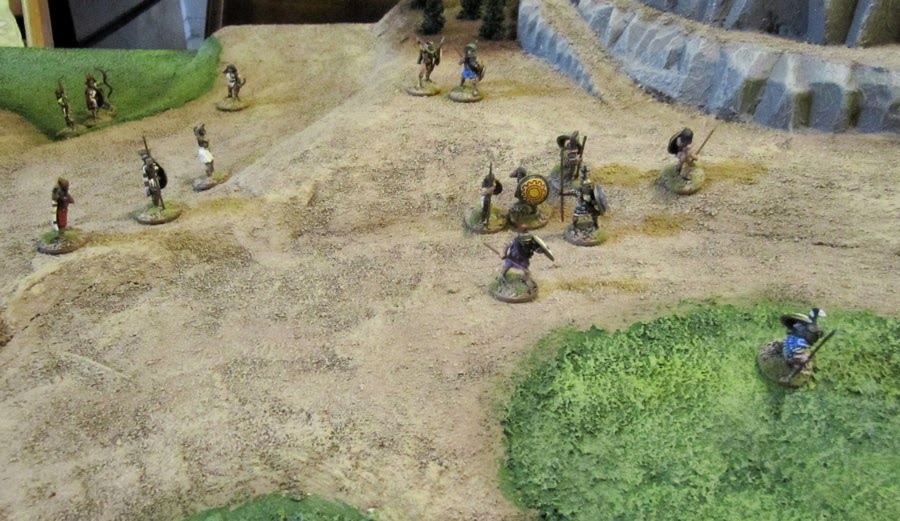 On the Amazons end of the turn one of the Warriors guarding the pass rushed down at Penthylos hoping to slow him at least until the pursuers caught up! 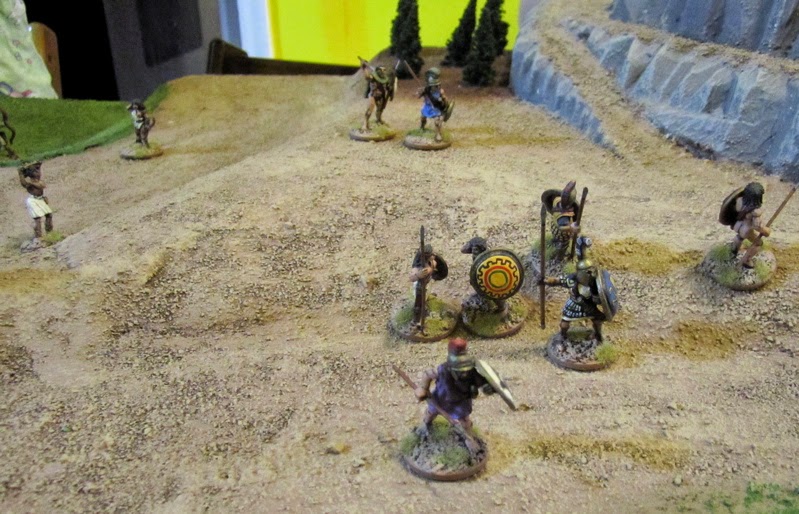 She thrust at him with her spear! 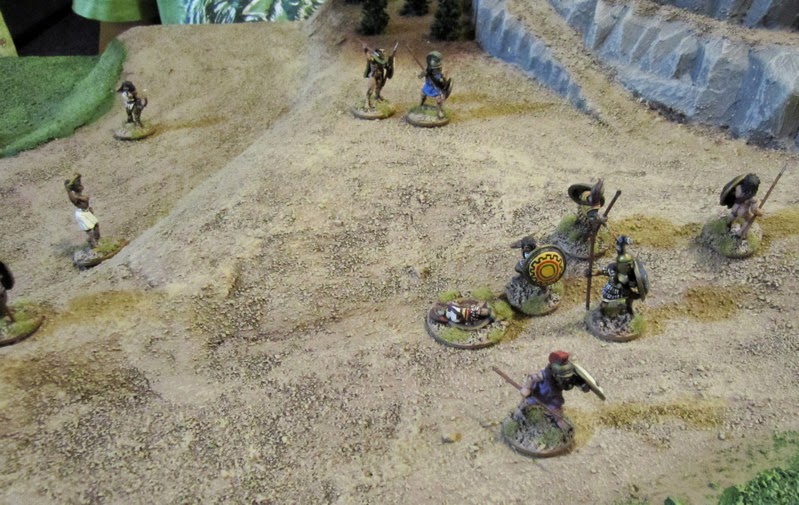 Penthylos side-stepped and cut her down!

I think another Turn-Over was rolled before they all could go. 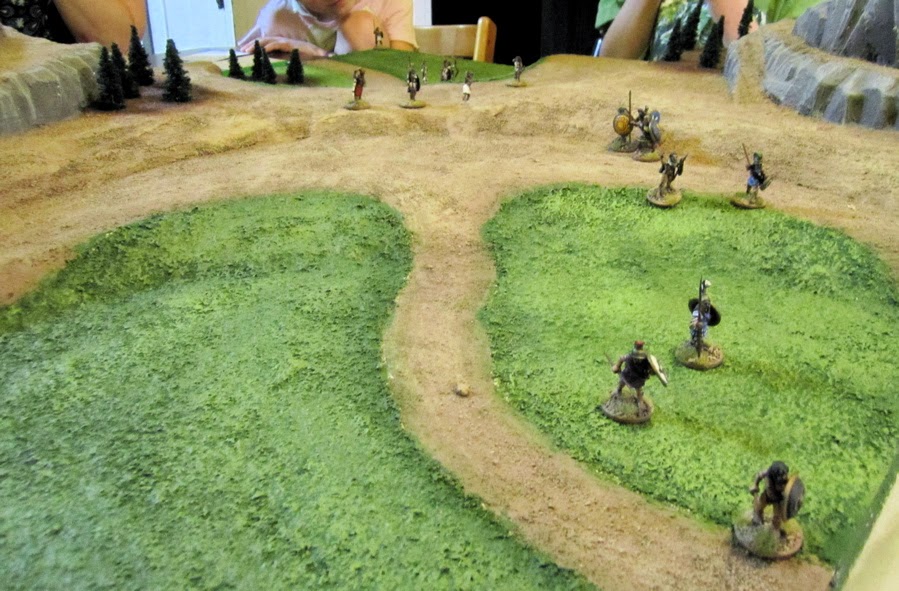 The Boys dice, on the other hand were HOT. It helped that he played it careful and kept Penthylos within one Long Stick of all his troops thereby being able to confer his Leader bonus to all. By the end of the turn a number of his hoplites were but one move away from freedom! 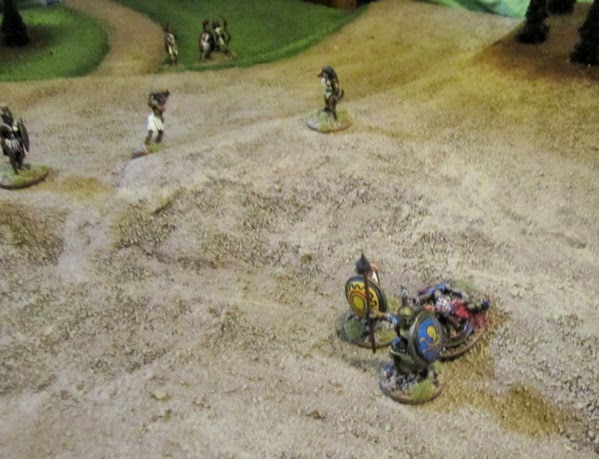 At this point the Amazon Archers climbed to within view and shot down on of the fleeing hoplites! 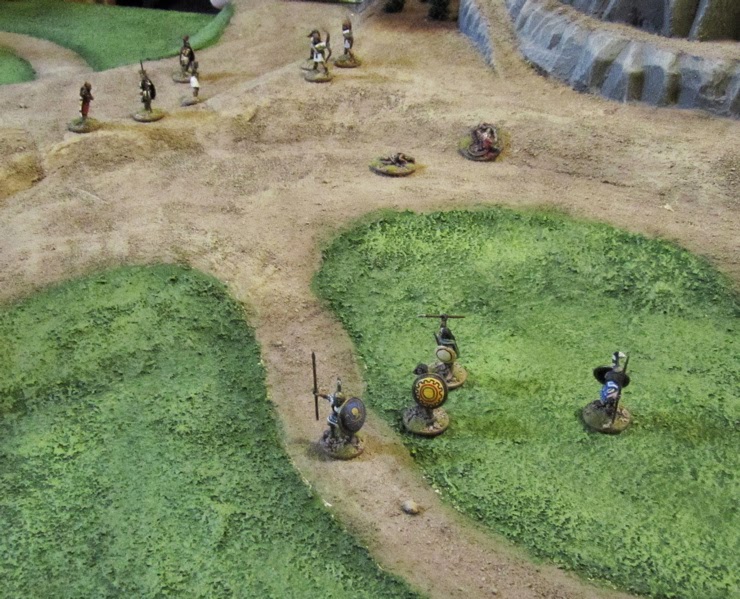 Three of the Greeks fled off the table, though another one or two probably could have, The Boy kept a few on to protect Penthylos, in case things went south for him. 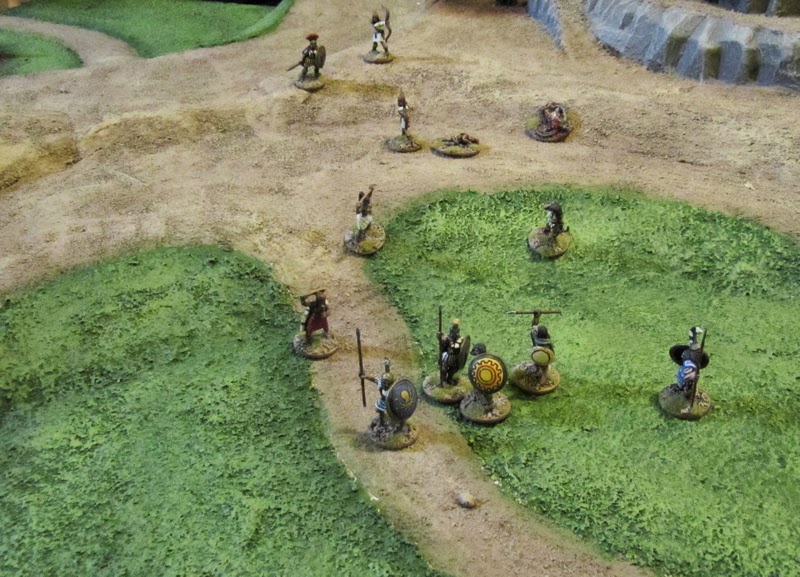 The Amazons advanced hurling stones and arrows as they went. Again on of the warriors got into contact with Penthylos. 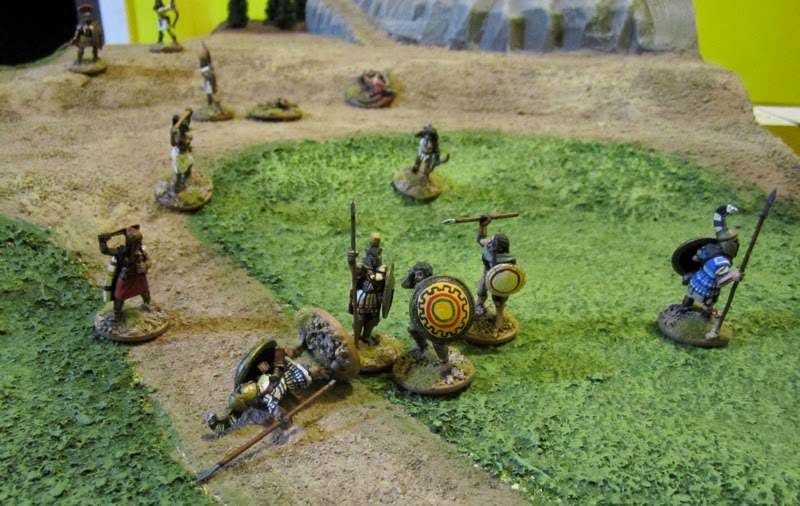 One of the Greek Hoplites stepped in to help Penthylos – he had a spare action so he made it a Powerful Blow and outnumbered the Amazon with Penthylos standing there… I guess The Boy had to had a bad die roll at SOME point in the evening! The Hoplite was knocked down. 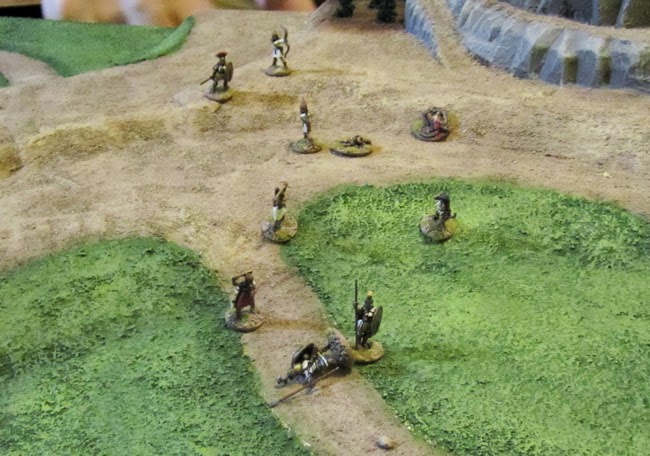 Penthylos, however, used the distraction of the attacking Hoplite to slip away with the remaining two Greeks. The prostrated Hoplite was left among the Amazons to die, I guess…

Seemed like a bit of a  cake-walk for The Boy. Not sure how I would have changed it. I suppose making more parts of the pass hard-going would have slowed them a bit and made it more likely that the Amazons made contact. Had I let the Amazon Pursuers arrive on their first turn, they could very well have been on top of the fleeing Greeks before the latter went anywhere - if they had unlucky activation rolls on their first turn. The Girl did have some bad luck with the dice rolling two Turn-Overs at critical points… Q3+ Humans with a Leader are a pretty effective lot.

We definitely need to play more of this. The kids were pretty excited about it because we’re reading a lot about Ancient times right now. I need to think of some scenario I can use my few Egyptians and Nubians in (as we have mostly been reading about that the last couple of weeks).

I’m not quite sure what to do next. I also recently picked up a print copy of Song of Shadows and Dust from Book Depository and pdfs of Song of Shadows and Dust, Flying Lead, Hearts and Minds, Fear and Faith, Kooky Teenage Monster Hunters, AND MORE Drums and Shakos (all from Saber’s Edge - thanks Paul!) and I still haven’t gotten in a game of Of Gods and Mortals or A Fistful of Kung Fu and I should really be playing some more play-test games of Power Legion!? Too many games, not enough time!! I think I’ll get some more games of plain old SoBH this week – because we know these rules inside out and hopefully that will get us back in game-playing mode and a little more stoked to read through the rules of the others.

I have to say I’m pretty stoked to Try Fear and Faith and Kooky Teenage Monster Hunters. I’ve been dying to find an opportunity to use THIS GUY and THESE GUYS in a game for AGES!

Hopefully more SoBH game reports… and pictures of the Romans I’ve been working on this week. The copy of the Storm of Swords unabridged audiobook I requested through the local library arrived… 37 discs… 49.5 hours… I have some painting to do! (I hope they’ll let me renew it – there’s no way I’m getting through all of that in three weeks!)
Posted by tim at 11:27 PM