Thursday was a busy day! First my old friend Mike stopped by earlier in the day to play some Song of Blades and Heroes (a report on the ensuing shenanigans can be found HERE!. Then in the evening Other Tim stopped by to play another game of Frostgrave!

Despite putting a rush on to finish up his Cheesecake Warband,
John was unable to make it… something about a wedding anniversary… excuses, excuses…

Amanda WAS available to play this week so I quickly helped her make a Wizard and hire and adventuring party and then set up a game for everyone. As there was four other players I sat out of this one. My hope is by our next game (hopefully next week) I’ll have the BIG table in the hobby room cleared off so we can set up multiple (smaller!) games – that will hopefully go a bit quicker (as it was, once again, a very late night!).

Amanda’s Elfie Warband: Thaumaturge, Apprentice (who used to moonlight as a pole dancer before scoring the apprentice gig!), Ranger, there Archers, two Thugs, and a war dog.

The Kids used the same warbands from the previous game - except that The Girl’s Thief and one of The Boy’s Men-at-Arms had to sit out the game due to injuries. The Boy added and Infantryman to his warband and gave the +2 (Fight) Magic Sword to his Knight (+6 Fight! Ouch!). The Girl also hired a new Knight for her adventuring party.

I had read about someone playing a co-op game on the Lead Adventure Forum Frostgrave Board and thought that was a great idea, but I didn’t end up having enough time to sort something out so we went with the standard throw-down-some-treasure-and-fight-each-other-for-it scenario…

My policy has always been: if it ain’t painted, it don’t go on my table… Other Tim seemed to have forgotten that and showed up with his new warband almost entirely unpainted (mostly just primed white…). For some reason I let it go… so all the white little orc/goblin/kobold-ish dudes running around – those are Other Tim’s frozen minions. For what it’s worth, showing up with an unpainted warband sort of didn’t work out for Other Tim… I don’t think he was able to roll anything higher than a 10 all game… and I saw at least five 20s rolled in combat against him! PAINT YOUR FIGURES – it’s super bad luck otherwise! 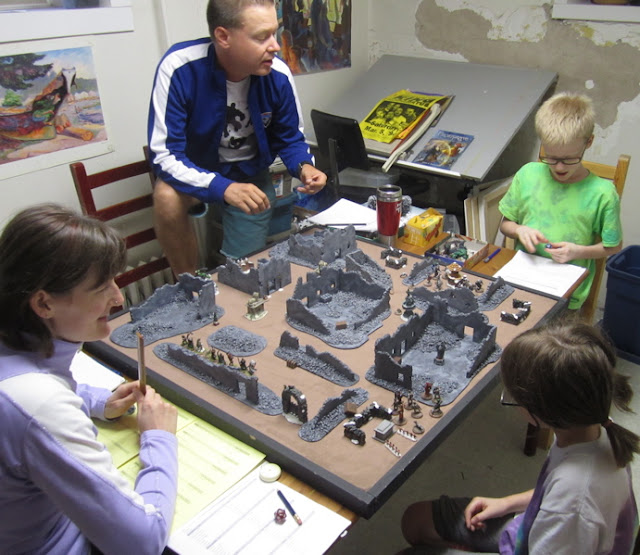 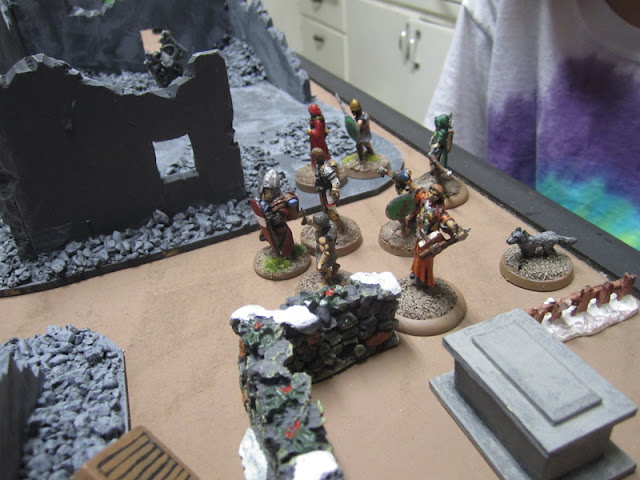 The Girl’s Sigilist and party all set up in one place. 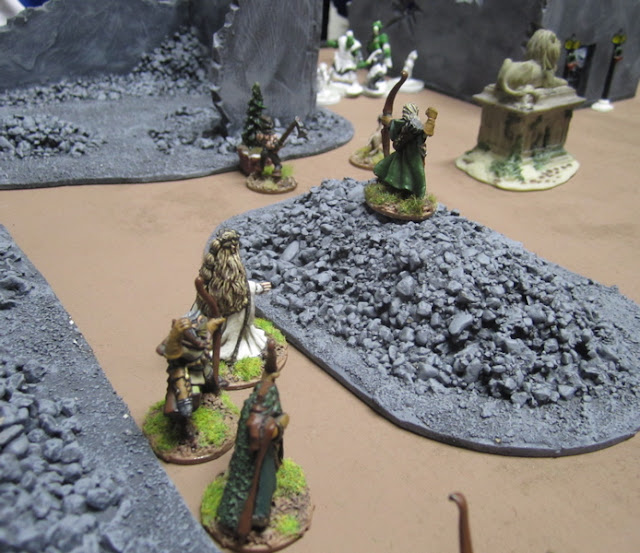 Amanda’s Thaumaturge started things off, sending one Thug to quickly grab… um… a magical potted plant? I guess so…? One of her archers leapt up on top of some rubble and loosed an arrow at some of Other Tim’s frosty looking goblins. It bounced off the frozen skull of the Knight. 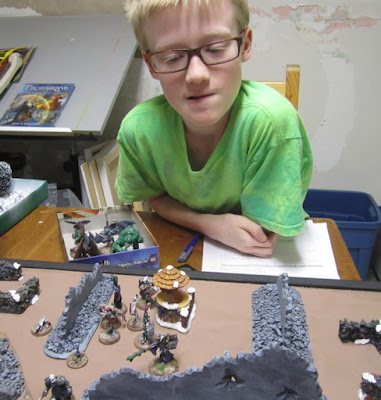 The Boy and his necromancer… 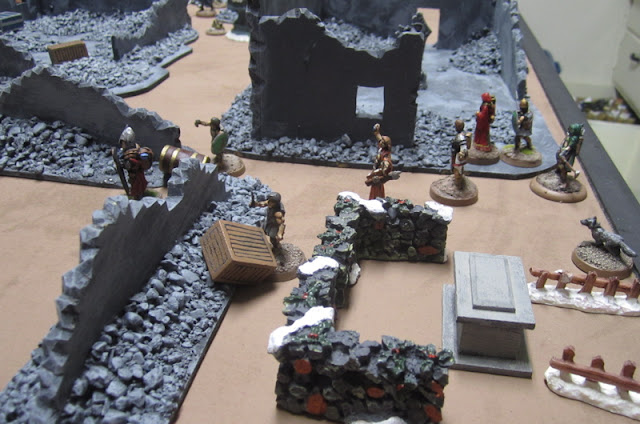 The Girls’ gang snatched up three chests rather quickly – these two in the picture and a third in the building behind them. 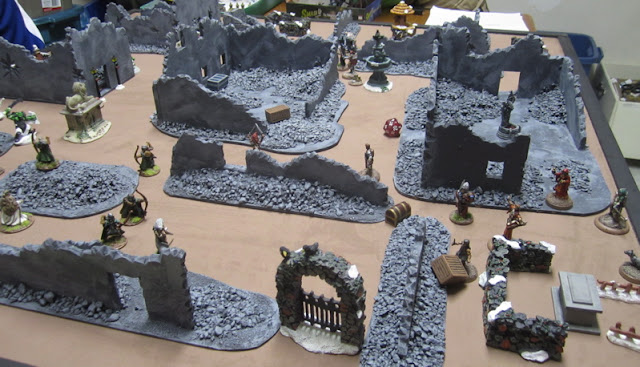 Amanda wasn’t going to stand for that and so her archers pin-cushioned the poor thug that had picked up the chest and her Apprentice successfully cast Push on the knight- shoving him back several inches on the tabletop. 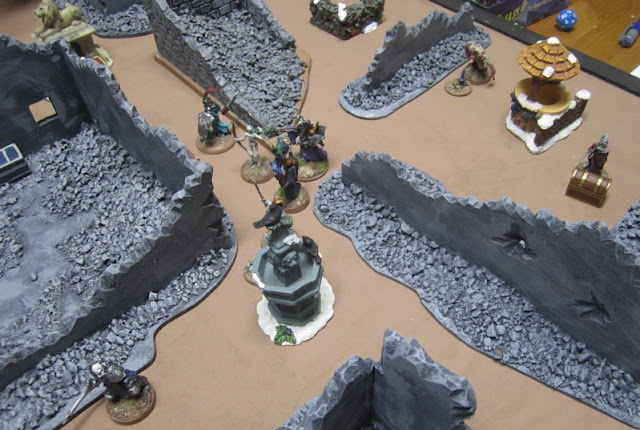 The Necromancer and his minions spread out quickly grabbing a lot of loot! Unfortunately the Necromancer had the worst time casting spells. I’m not sure if he successfully cast a single spell the whole game. His Apprentice had a bit more luck – which he constantly gloated about to the old wizard! 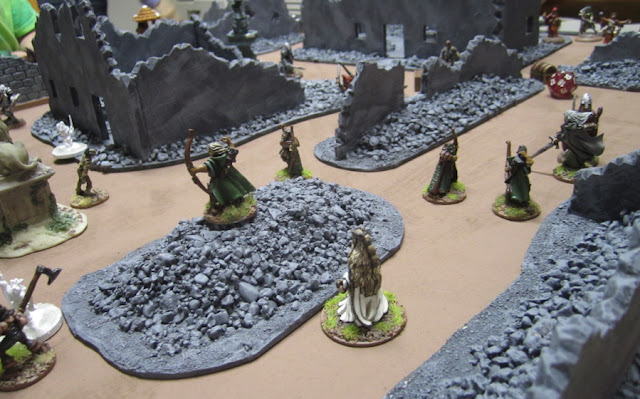 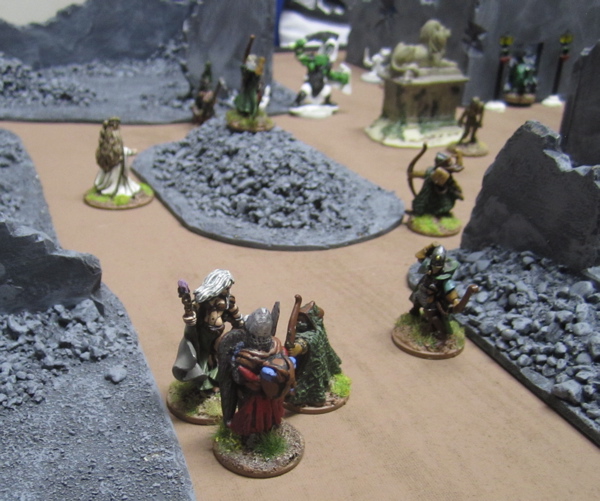 The Girl’s Knight rushed the Elves Apprentice, but this didn’t turn out well – the Ranger rushed in to the Apprentice’s aid and the two of them took down the knight in short order! 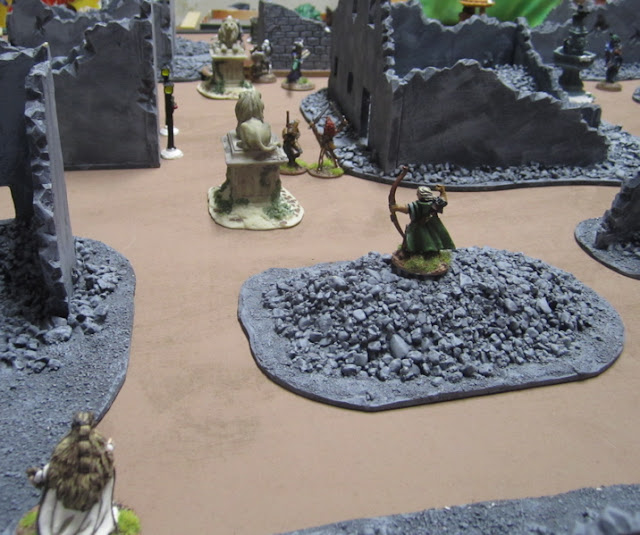 Other Tim was having the WORST time – as I mentioned before he pretty much lost every combat he was in and at least half of them he lost a guy outright. By the end of the game he’d lost SIX of his warband and countless imps and zombies!? He decided to call it a day and slunk of the board with just two treasures casting Imps into the mess as they fell back.

Amanda realized The Girl was going to successfully make off with four chests and she only had one.. the boy had already taken three off, so her only chance was to rush clear across to the other side of the board and try and prevent The Boy from dragging off the last two! 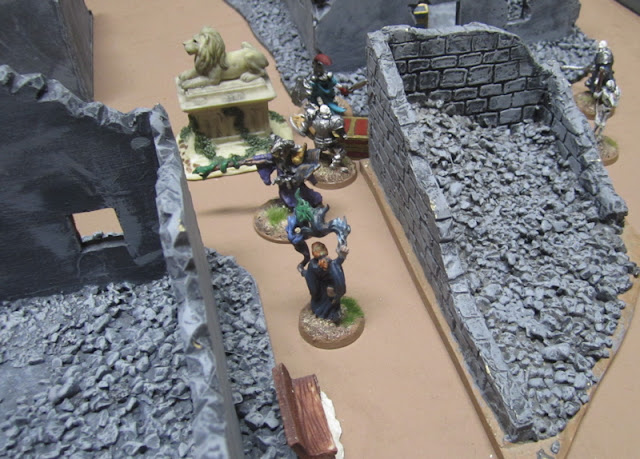 In the ensuing fray The Boy’s necromancer took and arrow from one of the Elf archer which took him down to ONE HEALTH (he’d also lost a lot due to failed spells earlier) so he decided to scarper. The Necromancer’s Apprentice stuck around - and gloated a bit – only to be TAKEN OUT by one of the Elves! 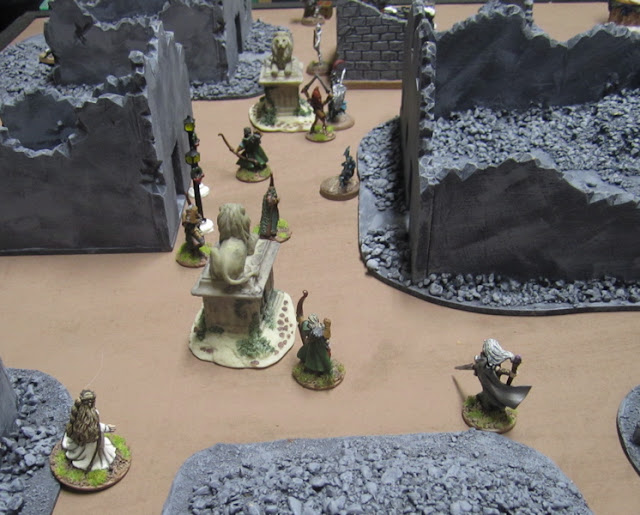 Despite these setbacks, The elves were slowed by a number of Imps the Orc Summoner cast into the mess from the table edge and that sufficiently slowed them up enough that they were unable to catch up with any of the Undead hauling away the final two treasures.

The Girl’s War Dog and Knight will be missing a game due to grievous injuries, but the Thug was only lightly wounded and will be back at it next game (along with the Thief that had to sit out this game). Looking over the treasure in the four chest she made off with, she found she’d collected 250 gold, a Robe of Arrow Turning, a Grimoire containing instructions to learn the Push spell, 3 Scrolls (Illusionary Soldier, Control Undead, and Decay), and 2 Potions (Healing and Strength). She also gained 240 experience, which gained her two new levels and brought her to 390 total XP – so she should have little trouble gaining at least one more level next game!

The Boy’s Necromancer really hauled in the loot – FIVE chests containing 590 gold, 2 Grimoires (Mirraculous Cure and Mud), a Fate Stone, and 3 Potions (Invisibility, Invulnerability, and Demon in a Bottle!). The Apprentice – his only tabletop loss- turned out to be just fine. He gained 290 experience which brought him to a total of 430XP and three new levels!

Amanda’s War Dog died. She only managed to get one treasure (the potted plant!?) But hidden in its roots were 150 gold and a grimoire containing the spell Crumble. She ended up with 160 experience – and a level – mostly from successfully casting a lot of spells and taking out a demon with one of those Banish spells.

Other Tim had lost SIX guys – a knight and five thieves! Luckily only one of the thieves actually died and the rest were totally fine (ashamed of their lack of paint they just scarpered at the first sight of combat!) … I forget what he got for experience and in his two treasure chests…? He assured me they’d be back next time – with more paint on them!

Halflings…? I’ve (mostly) finished up a few elements for Hordes of the Things – just need to get them on bases. Might get in another game or two over the weekend…? So perhaps some more game reports!
Posted by tim at 1:21 PM