The 16th Battalion (Canadian Scottish) was originally recruited from four different Canadian Highland militia units. The 16th was commanded by LCol. Cyrus Peck at Vimy Ridge, who went on to win the Victoria Cross for actions on the  Drocourt-Quéant  Line in 1918.

This, and 15th Battalion (48th Highlanders of Canada) are made up of the very first miniature I ever modeled and cast. I made the master from Milliput and they were cast by my friend John. The officer and piper figures I converted from spare riflemen (and I somehow got the piper backwards!? Teh bag is under the wrong arm and drones over the wrong shoulder!? What was I thinking!?) 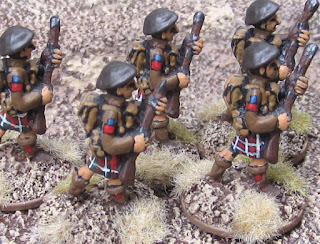 Detail of the formation patch and half-assed attempt at a Seaforth tartan. The red patch of the First Division is surmounted by a blue square (blue for the junior brigade of the division and the square for the junior battalion within the brigade).