I... I'm not sure I could explain the convoluted thought process that brought this onto the table to be finished. It could probably be summed up in two words: Squirrel Brain. (If a few more words were allowed: Highly Caffeinated Squirrel on Crystal Meth Brain...)

Regardless, I present to you: The Tallarn Taurox 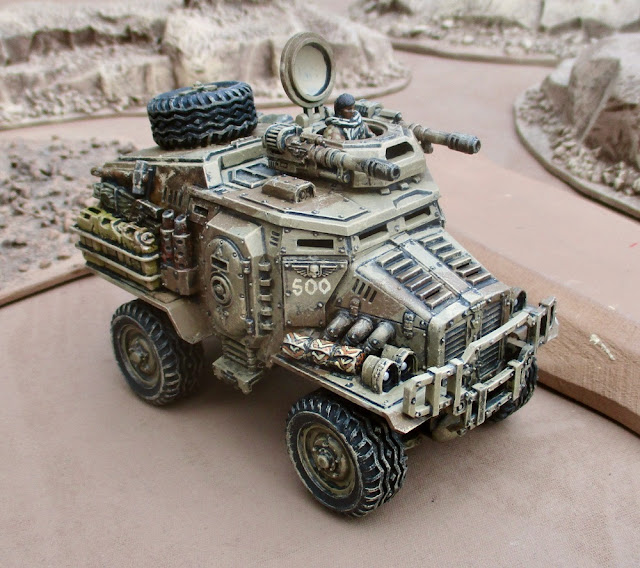 (Although, I saw one with track painted up to use as an Enforcer Vehicle for Necromunda and I started to think it didn't look THAT bad...)

I had originally meant to do the turret crew all swaddled up in a keffiyeh/shemagh looking out through binoculars... but then had a spare female head and thought I could just have the scarf around her shoulder so, hopefully, people could tell it was a women... Now I kind of wish I'd gone with the original plan - that head looks a little small for the body... I guess she could have some body armour bulking her up...? I may go back and change that... or I may not, because I'm lazy like that (feh, it's DONE! Move on to something that ISN'T yet painted!!!) 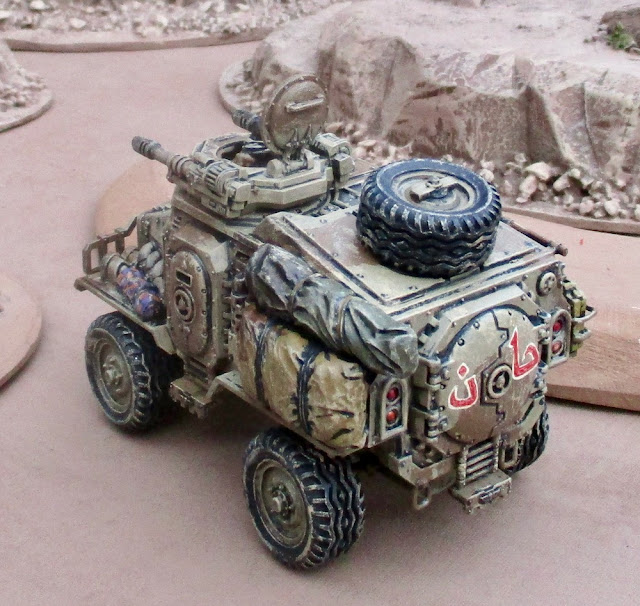 Back end - more stowage and the spread tire. If I did it right, the letters on the back should say "Khan" - because it's the commanders vehicle. The tire is also from Victoria Miniatures and most of the stowage is from a 1/35 Tamiya kit!

My plan for this was to ferry around a Company Commander for a Tallarn Outrider detachment... which currently only contains two squads of five roughriders and a single Scout Sentinel. Maybe I could throw the Sniper Special Weapon Section in there - seems like snipers are attached to reconnaissance units... I do, currently have enough that I could expand that out to THREE squads of TEN Roughriders, and Three sentinels - when I get around to assembling and painting the rest!

I've wanted to do an entire Sentinel Squadron ever since reading Lucien Soulban's Desert Raiders. There was a fun character that commanded the Reconnaissance/Sentinel Squadron. Unfortunately, while Marines can do just about anything with their wide variety of officer/HQ types - on foot, in terminator armour, with jet packs, on bikes, etc, etc... you can't put an Company Commander in a Sentinel (even though, according to the fluff, that is exactly what they do!). I'm not sure which is more silly - a Company Commander on foot leading a reconnaissance unit... or a TANK Commander leading a reconnaissance unit!? (even though Leman Russ tanks are FASTER than Sentinels!? In fact EVERY vehicle in the Imperial Guard arsenal are faster than their "Fast Attack" Reconaissance vehicles!? Someone explain THAT one to me!?)

Anyway, I liked the look of the Taurox - at least, with the wheels - I figure this could be kitted out as a Command version (although, now that I think about it, it SHOULD have had some extra radio antennae... darnit - maybe I could still add something - I'm thinking like the antenna that were on German command halftracks in the desert). 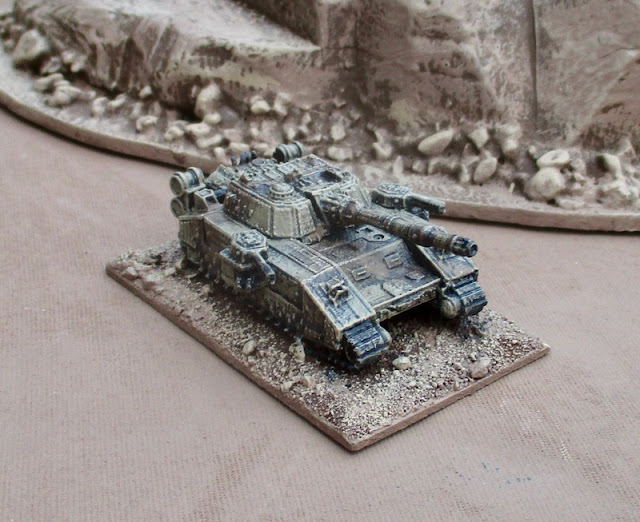 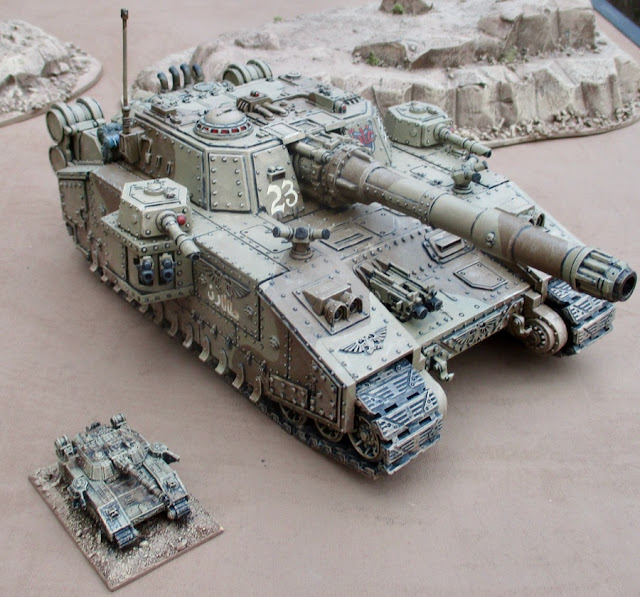 I don't have a LOT of stuff for the Imperial Guard painted just yet... I do have a few more tanks to paint up, and these few I may or may not repaint (I painted them in an older, temperate scheme - before I'd decided to do the Epic stuff as Tallarn), and a small number of infantry from Vanguard miniatures. People just want too damned much for the old plastic Imperial Guard miniatures (and Vanguard makes Desert Warriors... so I have Tallarn in TWO scales!). I do also have a PILE of space Marines and a few Imperial Titans...

I need to just shelve these, though, and not even think about them until next year... I DO want to try playing Warhammer 40,000: Apocalypse with them at some point, though! But I need to focus my painting and get the rest of the Necromunda and Hellboy stuff painted.

Man, I am out of control... Usually I write ONE blog post at a time - compose new blog, add in the photos, add in some text, post... but I've stalled on writing bunch lately and so I have eight (EIGHT!) drafts currently, and I don't even know when I'm going to get around to finish those and I just keep on painting and rebasing?! I have a draft of a post about October and November's games (That will get posted at the end of the month), a Necromunda game report from Sunday, Posts about four different gangs that have all been rebased and snazzed up, and one about 54mm miniatures... I even DELETED a few posts recently because... well... they just sat for so long, they no longer seemed relevant enough to bother finishing!?

Next...? Hopefully one of those mentioned above... but I've also got a PILE of half to almost-done minis on my painting desk, including, but not limited to an Ambul Hulk and two Borewyrm Infestations, three Tallarn Mortar teams, an entire Van Saar gang, MORE Escher gangers, Scavvies, Enforcers, Imperial Fist Scouts, and a wild array of assorted other things - mostly relating to the Warhammer 40K universe...

Oh, and I just traded a pile of Imperial Guard I'm never going to use for a half dozen or so Battlefleet Gothic Chaos Cruisers!? Most of them are broken, but I should be able to get four serviceable ones out of the lot by taking bits from the more busted up one and adding or replacing bits on the less busted up ones... and there are three destroyer/escort type ships... so... they're a temptation...
Posted by tim at 8:16 AM