It has been a while since I posted any newly painted stuff. I haven't been ENTIRELY idle... I have been assembling and priming and rebasing and organizing and plotting and even painting little bits of this and that, here and there... but overall, not terribly productive in the finishing painting miniatures department... This was made totally clear to me when I went to save these pictures (which are usually saved in monthly folders) and realized I never even made a folder for May!?

The first of these, I actually finished some time ago... I was just lazy and never got around to posting it earlier... I've jumped around a LOT this last month or so between Cursed City stuff and Age of Sigmar armies and loads of other games from all different periods - but with the new version of Age of Sigmar coming out in a week, that's kind of focused my attention back on those armies and trying to get some stuff together for a small Paths to Glory skirmish campaign over the summer - with the goal of working towards a few 1000 point armies and building up one army to about 2000 points 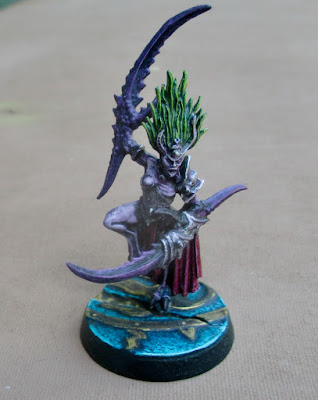 Viceleader, Herald of Slaanesh - usable in either 40K or Age of Sigmar.

It was painted rather quickly, mostly with Contrast paints. This was my plan for the entire Slaanesh Daemon army - to knock them all off quickly with contrast paints... but it's been taking rather longer than I expected to get them done...

Hedonites of Slaanesh will, I think, be my primary army for Age of Sigmar. As with 40K - Chaos fights EVERYONE - including other chaos factions! As I don't have a full version of the previous versions (I figured a new edition might be coming out and held off on picking up the full Core Rules) so some of the army building rules are a bit confusing to me. I think I'm leaning toward putting together a Godseekers host - which will mostly be daemons and mortals mounted on seekers and a few chariots... so... this Viceleader won't be much use... Nor will the piles of Daemonettes I've cobbled together... Ah, well.. I'll find use for them at SOME point.

These might be bolstered by some Slaves to Darkness (with a Slaanesh Mark of Chaos!).

Other forces I am working on are Daughters of Khaine, and an assortment of other Chaos forces based around the miniatures that came with Finnegan's two Warhammer Quest games (Silver Tower and Shadows over Hammerhal) and my Wrath and Rapture box.

One of the largest immediately useable forces I have is actually Blades of Khorne - because I have slmost all of the Khorne stuff from Wrath and Rapture and the Warhammer Quest boxes - I just need to finish up the Bloodcrushers. 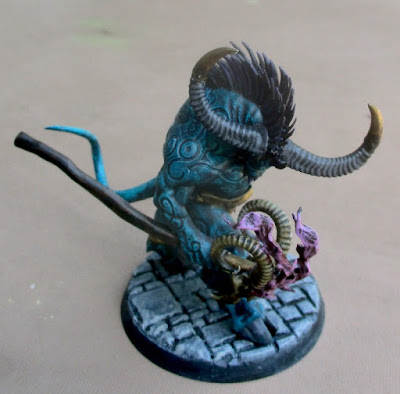 This one came from one of the Warhammer Quest boxes. Between the boxes there is a significant number of Disciples of Tzeentch - in addition to this Ogrid Tahumaturge, there is a Gaunt Summoner, Kairic Acolytes, Tzaangors, and Pink, Blue, and Brimstone Horrors.

Unfortunately not in numbers included in the boxes are not terribly useful for proper games of AoS... Most are normally fielded in units of 10, but there are 16 acolytes, 6 Tzaangors, 2 Pink Horrors, and 4 Blue and Brimstone Horrors... ugh...

A Gaunt Summoner gets 5 "rolls" on the Paths to Glory tables (or you can just PICK five followers). The Ogrid Thaumaturge counts as two. There is a total of 10 Horrors, though not of one type... but still, could be used as a unit. There are less than 10 Tzaangors, but there are a few extra Acolytes... so, I figure that could make up for the understrength Tzaangors. Once all painted, It'd all be a good STARTER warband for Paths to Glory. I hope i can quickly paint up most of these with Contrast paints as well...

That's all for now. Not sure what I'll be finishing next... I feel like it'll probably more Age of Sigmar stuff.