These chaps are to represent the 42nd Canadian Infantry Battalion (Royal Highland Regiment of Canada). Now those of you who have been paying attention for a long time or delved back into the older posts may be wondering why I’m painting up Great War Miniatures for my Vimy Project when I have figures of my own that I’ve modeled and could cast up for myself… I have no clear answer other than: “I felt like it…”.

Though I’m not sure how many other manufacturers there are that are doing late war WW1 British…? I suppose there’s Gripping Beast/Woodbine, Old Glory (of which I have nearly two battalions worth already – painted up as battalions from the 1st Division)… Irregular Miniatures…? Any others…?

As mentioned these are Great War Miniatures. I really like the minis – lots of character and details (like the picks and shovels and mugs and other sundry items of kit hanging off their packs and webbing– which I have often seen in photos but have yet to see any other manufacturer put on any figures!)

Some are in kilt aprons others are not. Three of them aren't from "Highlander" packs. To make up the fifteen I bought a pack of Highlanders Advancing and a Highland Command pack - each containing six figures. Rather than buying another Highlander Advancing pack and having three spares, I noticed there was a pack of British in Great Coats - so I ordered one of those and it just kind of worked out that I could use three of them in the Highland regiment and three in one of the regular regiments and I didn't end up with any spare figures.

These guys are destined to serve at Vimy . I happen to know there were specific orders issued stating that troops were NOT to wear great coats! The powers that be did not want anything slowing their advance! I figured however that soldiers being soldiers SOME of them would have snuck them along with them during the advance up to the line in the dark - and if anyone were to turn a blind eye to such shenanigans it might be a highland unit (wearing KILTS) in the blowing snow!!

I have no idea if the 42nd Canadian Infantry Battalion wore red hackles on their helmets. They were on the minis and I figured if other Highland units wore them, it seemed likely that the 42nd of Canada could very well have... If presented with eveidence that they very definitely did not, I can always carve them off and touch up the helmet covers...

If I ever game the last 100 days I'll have to convert a Will Bird figure. Bird Served with the 42nd from Vimy to the end of the war. In his memoir The Ghosts Have Warm Hands, he mentions during that last push he'd found an old pair of trews which he had cut off to be shorts and wore those in place of the kilt. I seem to recall a passing filed officer (might have been in a car?) spotted him and stopped to tell him he was a disgrace before carrying on... Have to read that again some time. 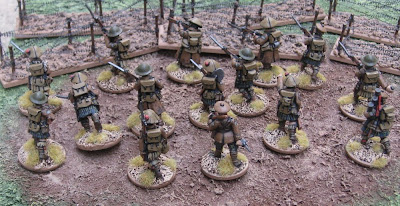 They are a bit slighter than the Renegade Minis and as such there were many bent rifles and bayonets when they arrived. A handful of repairs were required and one rifle is more or less beyond repair (thin rifle, broken off at the point where the hand is gripping the stock. I guess I could drill it and put in a bit of wire and build up a new stock around it… at some point…).

52 figures painted in the first week of the year... if only I could keep up that rate for the rest of the year - I could make a SERIOUS dent in the led pile!

Not sure… While there are a number of items populating my workbench at the moment I’m feeling the need to switch gears and get some work done on some not-so-hobby-related projects… Reading… drawing comics… painting other stuff…
Posted by tim at 8:01 AM