I should mention that this was... oh... 25 years ago, and neither of us has played Warhmmer Fantasy since DBA came out... or at least I haven't... Anyway, These had been sitting in boxes for decades and moved back and forth from province to province and finally John realized he'd never play WFB ever again, but might play HOTT with me... so he gave them to me to turn into a HOTT army...

I had originally thought I might strip and repaint these... but recently realized I would never, ever get around to doing that. As I've always maintained that basing is just as important as the painting of the miniature itself. A beautifully painted miniature poorly based (we've all seen them - beautifully painted minis plunked into a ugly plastic slotta-base that isn't even painted green - or even black!?) and that a decent basing job on a so-so figure (and a consistant basing system for a so-so army) can make it look not half bad... I decided just to re-based a bunch of them and see how they turned out....


(Remember: click on the pictures for a bigger version):

Here is the whole force. There are lots of options... 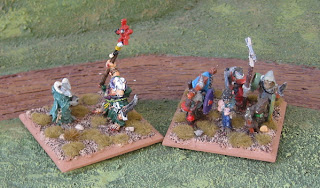 The Command options Magician (left) and Warband (right). I think all of these minis are from Games Workshop.

Rat Ogres - could be either Behemoths (or maybe Blade?). The two elements on the left are old Ral Partha figures, the one on the right is from GW. 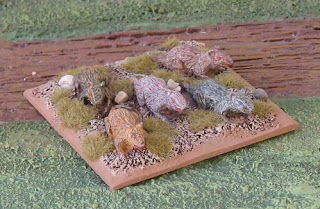 Giant Rat swarm (Horde or Beast?) - I think these were from Ral Partha...? 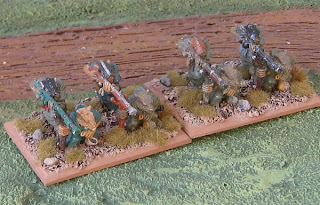 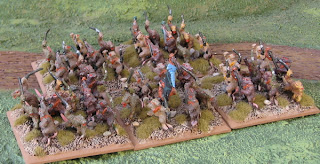 Ratling Horde - I think john used these ones as Skaven Slaves. The figures awere from Ral Partha. I rather like them. Most likely be Horde... maybe Warband....

Finally More Ratling Hordes - these ones are from Games Workshop. (I actually painted three of the minis on these bases for John 20+ years ago... Can you spot them?)

Hopefully with these done I'll be able to get John out to play a bit more often!!

Labels: Fantasy, Hordes of the Things