The 14th Battalion, CEF, was originally raised in Montreal in 1914 from members of the 1st Regiment Canadian Grenadier Guards, 3rd Regiment Victoria Rifles of Canada, and 65th Regiment Carabiniers de Montreal – all militia units. Apparently Sam Hughes (Minister of the Militia and the man behind the organization of the Canadian Expeditionary Force) dubbed the new amalgamated unit the “Royal Montreal Regiment” – though without any… y’know… actual Royal ascent!! (It seems these sort of details were but trifles to bold Sir Sam).

All the figures are from Wargames Foundry 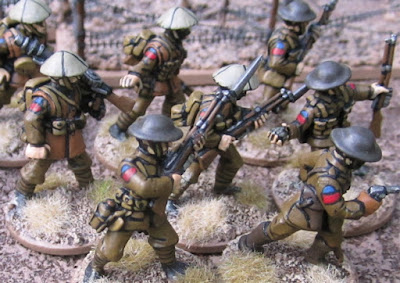 The unit formation patch is a blue semicircle over the red patch of the 1st Division (blue, being the colour or the junior brigade in the division, and a semicircle to denote the second battalion within the brigade). 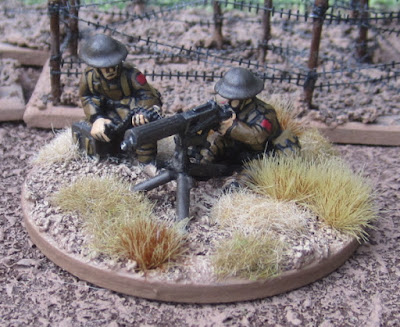 I also happened to finish up one of the MG elements for the 1st Divison (but I forgot to do the arrow above their divisional patch!?) 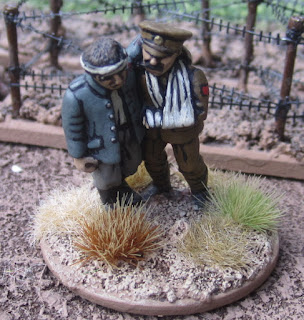 The Girl was fascinated by this last little vignette. She had asked why they were in different uniforms and I explained it was because one was German and the other was British (though I’m using it as a Canadian…) – to which she responded “but I thought they were on different sides”. This, of course, filled me with pleasure because, not only did it show she actually was paying attention last time we were talking about the Great War (I’m not sure Amanda could so easily identify who was on which side!) it also offered me the opportunity to explain a little more about history and human nature: a) often prisoners captured in battle would help carry the dead and wounded from the battlefield and b) once a human truly recognizes that another human is not actually a threat to them, they are usually pretty willing to help that other human out. These two chaps are both in a spot of bother and, despite what “country” or “side” they were fighting for, have come to realize that at this exact point in their lives, neither is a threat to the other and, really, they have far more in common than they have differences and why would they not help each other out?

The world has really been getting me down lately and feeling like “why should I even bother carrying on…?” I need to remind myself of these things from time to time.

I have one last battalion that I need finished for the REGINA TRENCH! game I and running at ToonCon (in less than two weeks now!!!). Luckily the unit is mostly done I need to add one figure and fix up a few others. I also need to finish up the terrain. So hopefully I’ll be posting pictures of terrain and the last of the figures for the ToonCon game shortly!! I have all Sunday set aside for terrain-making, so hopefully I’ll find time to at least post an update on the situation early next week.
Posted by tim at 11:42 AM