Enough resting on my laurels, on with the next 10 years! Here is another force for Dragon Rampant!

The Elves of the Southern Isles are usually a reserved, most unwarlike people, rarely seen in the lands of men. Rumors claim they inhabit distant chain of islands in warmer climes and travel only to occasionally trade with the other peoples of the known world. Decades, or even generations, can go by without seeing their ships on the horizon. They have never been known to meddle in the affairs of men-folk, nor even come to the aid of their continental kin (the Elves of the Woods). When moved to violence, it is for their own purposes, and they strike as if from no where with a swiftness and ferocity that leaves their foes bloodied and wondering what has happened (well… those that survive…).

These figures are all made up for old I-Kore Celtos Sidhe figures. I picked all but four of them up from a bargain bin at my friendly local game store (Dragon’s Den Games) for $1 per pack!? The other four I recently ordered from Brigade Models who currently sell the line.

The entire force (with options) 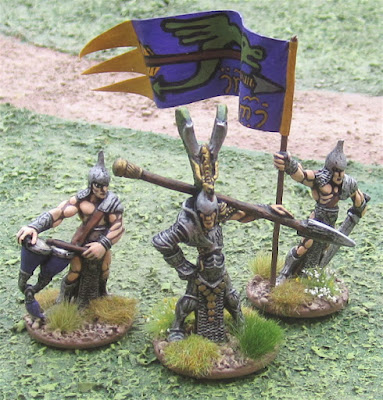 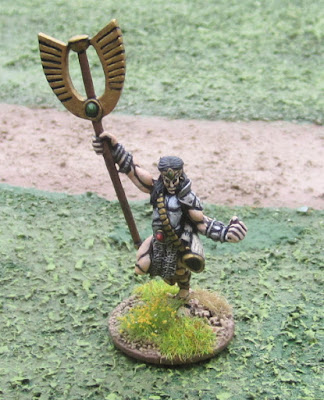 Elf Wizard – not regularly part of the force, I envisioned this as an option to replace the leader, or one of the archer units or perhaps both units of spear… unfortunately the most obvious way to field him (Light Foot, Single Figure Unit, Wizard) ends up being 7 points, which doesn’t allow him to just slip into any of those 6 point slots… I suppose the other option could be (Heavy Foot, Single Figure Unit, Wizardling), which would be six points and he’d only have the use of 3 spells. OR I could just call him (Light Missiles, Sharpshooter, Single Model Unit) and say all his offensive spells are pretty much just like a whole unit of elves shooting. 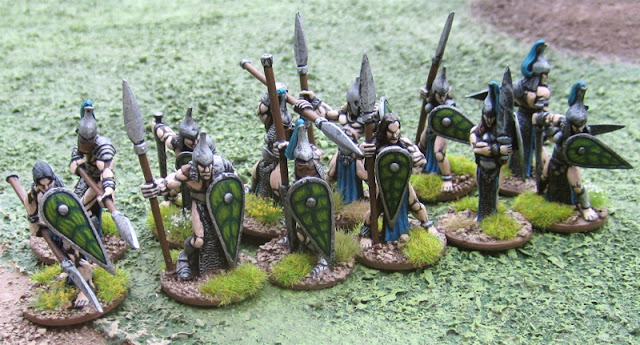 These aren’t really offensive warriors – truthfully they aren’t really warriors at all – they are sailors and crafters and such that have had to take up arms to defend their realm (or the interested of their realms abroad). Their task at war is to guard the flanks of the War Leader (who IS a professional Warrior – who has spent his life training for combat) and protect the Archers.

(These are newly painted – I was trying once again to go for a styleized leave motif on the shields, but these ended up looking even LESS like leaves than the first batch… ah well… they’re done and I’m not that fussy so I’m not going to bother repainting at this point... maybe they're supposed to be fish scales...? Who knows with those crazy Elves...) 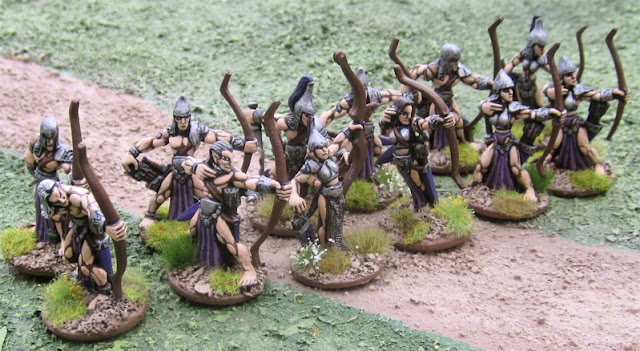 Elf Archers (Light Missiles, Sharpshooters) 6 points
The business end of the Elf Warband. The Elf Way of War is: “Long Distance: The Next Best Thing to Being There…” Melee is messy and dangerous. Why get involved in that nonsense when you can just pick off your enemy from afar and set them to flight without having to come into actual CONTACT with them… 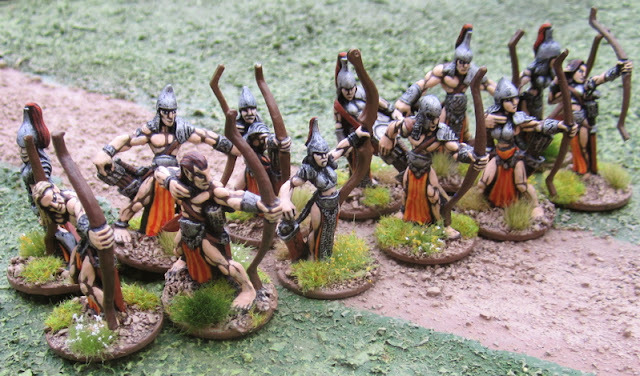 Four of these ones are newly painted as well – they are the ones I recently ordered from Brigade Models. The rest have been partially repainted as they were originally painted in purple like the unit above.

Now to get them all on the field of battle! Perhaps over the Holidaze I can get The Boy to face off against them with his mix of Orcs and other smelly, mean monsters…

No, really… This is the end of this distraction, and the urge to paint more stuff for Dragon Rampant... well... until I actually PLAY a game... then I might be distracted all over again!?

Rogue Stars: Skirmish Wargaming in a Science Fiction Underworld arrived today and I am VERY excited about it. It shouldn’t cause any trouble on the painting front, however, as I have NO shortage of Sci Fi figures that could be used for this (or even Modern… or Old West…? figures that could be used in a pinch) – Perhaps we’ll see a return of Mad Willie to the tabletop (The Scottish gunslinger who doesn’t believe in lasers...?) – and the rest of the Crew of the Muttonchop Express!
Posted by tim at 1:25 PM