Khagra's Ravagers is the first expansion for Direchasm, the latest iteration of Games Workshop's Warhammer Underworlds series of boardgames. Khagra's Ravagers are a small group of Slaves to Darkness led by a pair of sisters; Khagra the Usurper and Zarshia Bittersoul. They are back up by two Chaos Warrior boy-toys; Razek Godblessed and Dour Cragan.... (or... maybe we could pretend it's another all-girl warband and that Razek and Cragan are chaos warrior wimyn!?) 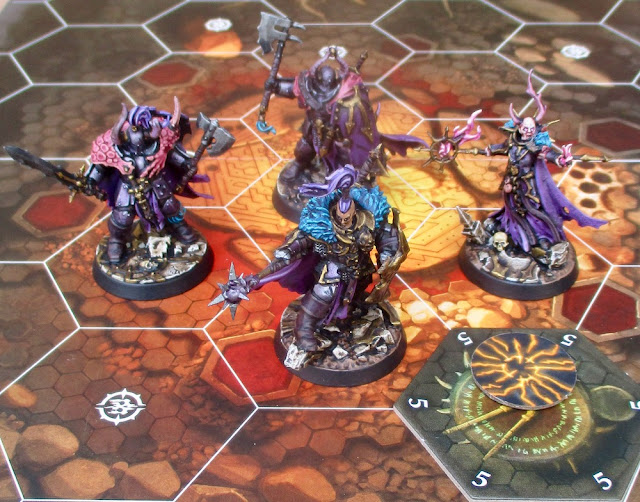 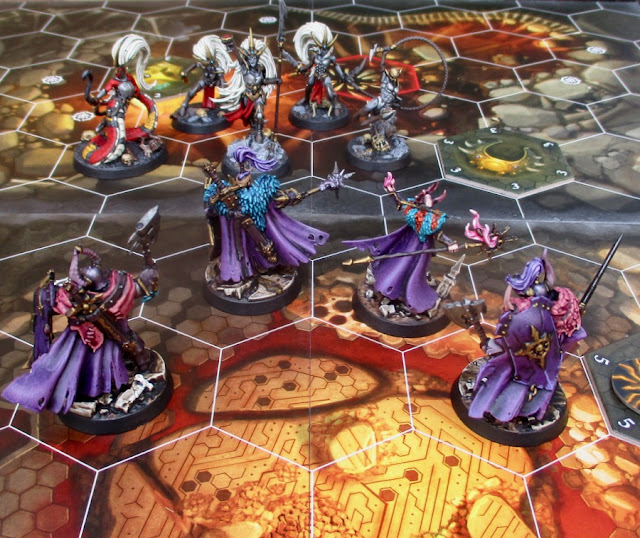 I kind of wandered away from the basic black (with red and gold highlights) of undivided chaos warriors of the Slaves to Darkness and went with a definite Mark of Slaanesh bent with these. I have other Slaanesh stuff and, should I ever acquire MORE Slaves to Darkness, they will definitely, likewise, be decked out in fabulous colours and fielded as allies to my Hedonites and Daemons of Slaanesh! 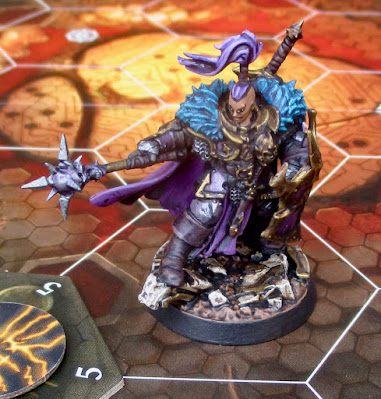 Khagra the Usurper - Currently the leader of the group. I think I read somewhere in the fluff that her sister, Zarisha, used to lead, but somehow Khagra has taken over and Zarisha is a bit pissed about it...? Not sure where I read that? Must have been on the GW/Warhamer community website somewhere. 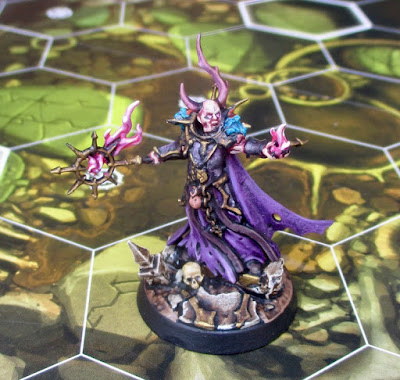 Zarshia Bittersoul - the Sister Sorcerer. I haven't had a really close look at the cards just yet, but I did note that the fluff about her seething resentment is backed up in cards like Power Reclaimed (Restricted: Zarisha) If Kharaga is taken out of action, Zarisha becomes the leader (and gains +1 wound and +1 Wizard level). Ha! 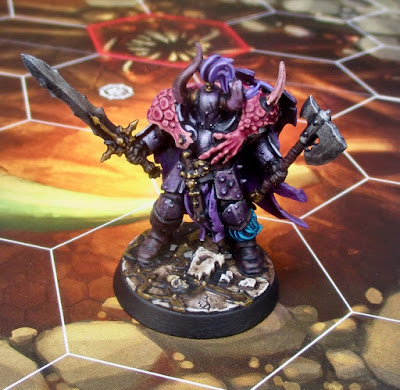 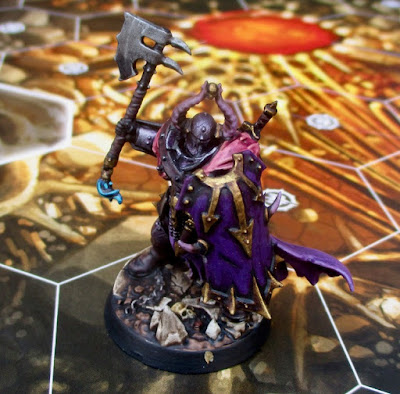 Hopefully I'll get a chance to try them out this weekend - Maybe even this evening!?

I have a pair of older, metal, Chaos Warriors I was painting along with these, thinking I might add to these to make a Slaves to Darkness warband for Warcry... or... maybe at some point I'll just pick up some more plastic Slaves to Darkness plastic Chaos Warriors - as they'd be a closer match. They're not quite finished. I'll post them all together when they are. Hopefully I'll get back to trying out Warcry at some point.... but Warhammer Underworlds seems to have caputred my imagination for the moment and i'm rolling with it!

Next? I do have some Frostgrave minis I wasnted to finish painting for a friend this week and then I want to finish up Myari's Purifiers... After that...? I'm not sure... Maybe some of the Stormcast - or ALL of the Stormcast!? Just do them ALL in one big batch-paint! I have three Warhammer Underworlds warbands of them (two of Steelhearts Champs and one of Ironsoul's Condemnors) and the Easy-Build Castigators (which may or may not have been a Warhammer underworlds warband in one of the previous seasons, re-released as a "easy-build" set for use in Age of Sigmar - like many or the other older, out-of-print Warhammer Underworlds warbands), though I may paint one of the Stealheart's warbands as Anvils of Heldenhammer - in BLACK armour!

Looking at the upcoming warband releases... I don't know... I'm kind of lukewarm on the Skinks and Savage Oruks - or even the hinted-at Bone Reapers . The Crimson Court does look interesting... and I kind of feel like I might like to track down Wurmspat and Hrothgorn's Man-Trappers, while they are still available... but I really need to get some of the ones I've already picked up PAINTED before I go buying anymore!

In addition to finishing up Khagra's Ravagers, I also finally finished reading the Direchasm book from Black Library the other day. The book is a collection of short stories to tie in with the release of the  Warhammer Underworlds: Direchasm core box.

All of the stories take place in the Beastgrave, the living mountain in the Realm of Ghur, whic is the setting for Direchasm (the game), introduced the year before with  Warhammer Underworlds: Beastgrave core box. The first story, The Mountain's Call, features the two warbands included in the Direchasm box - Myari's Purifiers Lumineth warband and The Dread Pageant Hedonites of Slaanesh warband. The last story, Ghastlight, also features the Dread Pageant. The rest of the stories involve characters from warbands released in previous "seasons" of the Warhammer Underworlds series of game, mostly Beastgrave (Season Three), but there are a few that were introduced in Season One or Two (which took place in the ruined city of Shadespire, in the Realm of Shyish) that have, in one way or another, made their way out of the city and into Beastgrave.

The stories were interesting enough and provide a bit more background "fluff" for a number of the factions available to play in the game and build a little context in which to play the game for those that are more interested in narrative than just playing a game. Unfortunately, NONE of the NEW warbands coming out as part of the Direchasm release were included in the stories. Seems a bit of a shame and a lost opportunity. I would have liked a story about Khagra and her sister. I guess they didn't want any spoilers about the new yet-to-be-announced warbands.

It actually seems they may have commissioned the writers to pen the stories before they even made up the rules or any of their own fluff - as Vasillac the Gifted - The leader of the Dread Pageant - is made out to be a sorcerer of some sort in both the stories in which he appears!?