Finnegan was busy with math homework that he's fallen a bit behind on, so Amanda played a game of Warhammer Underworlds with me on Sunday evening. She played Morgwaeth's Blade-Coven, again, and I played Garrek's Reavers. Morgwaeth's seems to have become "her" warband. I'd hoped the Dread PAgeant would havebeen "MY" warband... but they are 0-4... so... Perhaps once I start tailoring the decks, they might have a better chance... but things are not looking so good now! 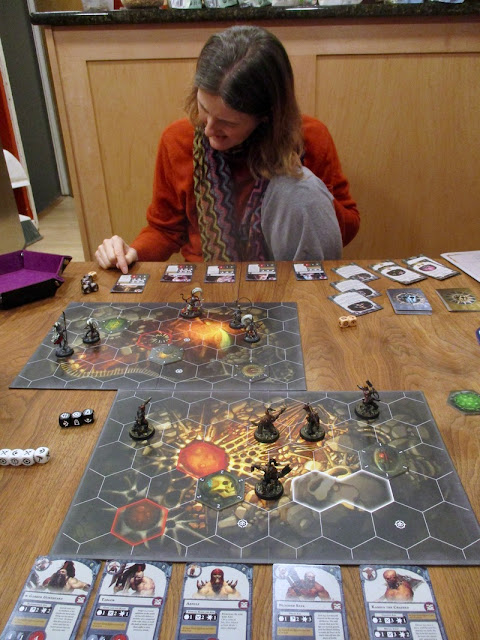 Amanda won the roll-off to determine board set-up and actually had me pick a board first. I went with one that had two Lethal Hexes - thinking if she tried to move into my territory to take objectives, there would be things I could push her warriors into... She selected second and set it up as above. I started placing objective tokes first... I realized halfway through the game, we totally forgot to place additional Lethal Hex tokens. I won the roll-off for warband set up and decided to go first - as we had an even number of models, going first meant I would finish first and have a bonus for the roll-off to determine who went first in Round One.

I actually discarded the first hand of Objective cards - one would be impossible to do, a second would be very unlikely to do, and the third was one that gave a Glory Point if I'd scored a surge earlier in the turn... so... useless...  They might have been useful later in the game, but I figured I needed stuff that could be scored in the first round - not sit on stuff to use later. Discarding meant I wouldn't have as many Objective cards to use during the game (9 instead of 12) but sitting on stuff to use later, meant having more cards in my deck were useless, if those cards were unavailable due to me not PLAYING any objective - allowing more to be drawn!

I won the roll-off and chose to go first. 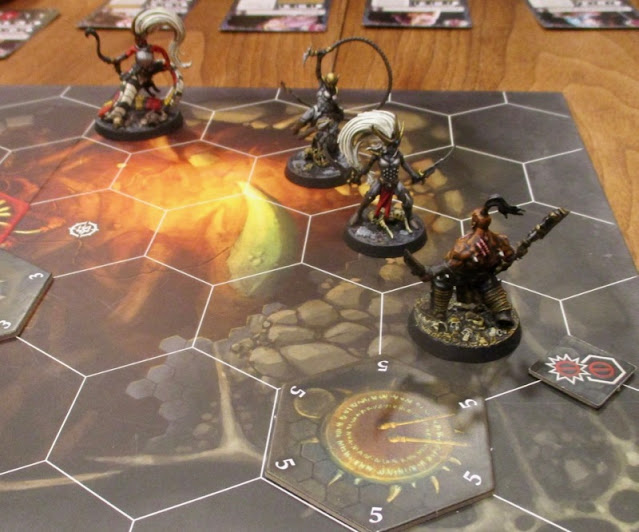 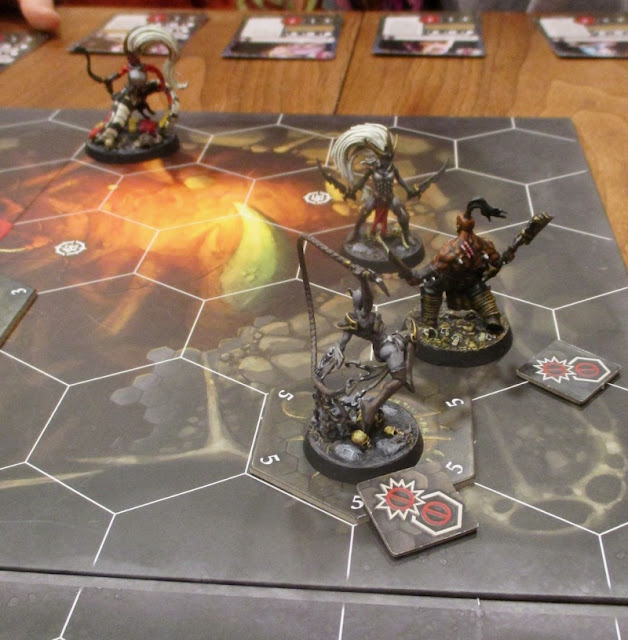 +1 Glory Point for Morgwaeth's Blade-Coven - this also allowed Morgwaeth to inspire herself and upgrade herself with a Crimson Shard (which allows her to re-roll one attack die).

I also was able to score an Objective Card - Martyred +1 Glory if the first fighter to be taken out of action in a round was one of my own... Targor was one of my weaker fighters - with only two wounds - and could be done without... the Martyred card is kind of stupid, because having one of your own killed to get one Glory is a net gain of zero as the enemy warband ALSO gains a Glory Point for taking out one of your warriors... and possibly more if doing so satisfies conditions on an Objective Card they are having. The other bonus to losing one of my weak warriors was I was 1/3 of the way to inspiring all of my remaining warriors (they inspire when three warriors are taken out of action - ANY three warriors)

With that Glory Point I was able to upgrade Arnulf with a Wicked Blade. 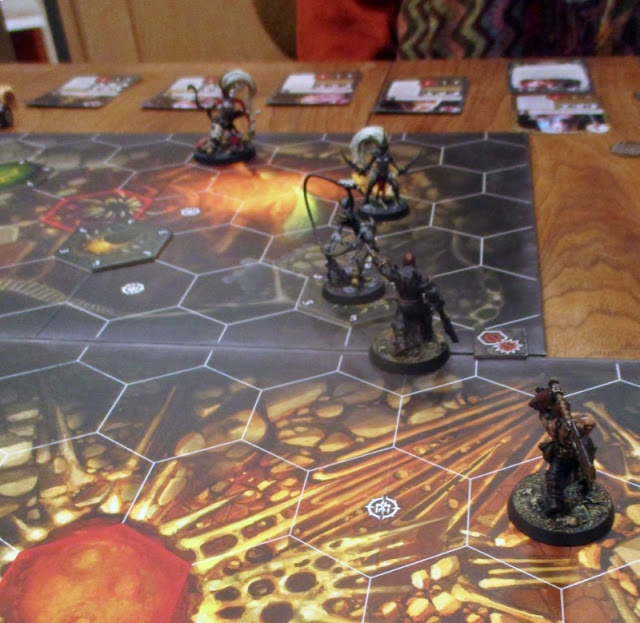 Arnulf, being my other weaker warrior, might not last long, so I thought I should make use of that wicked blade as quick as I could and charged him into action attacking Khamyss and took HER out of action!

+1 Glory point for me! I upgraded Garrek with Ever Advancing (it was a toss up between that and giving Saek an unstoppable charge - which is probably what I SHOULD have done - considering the bottleneck we were fighting through... ah, well...) 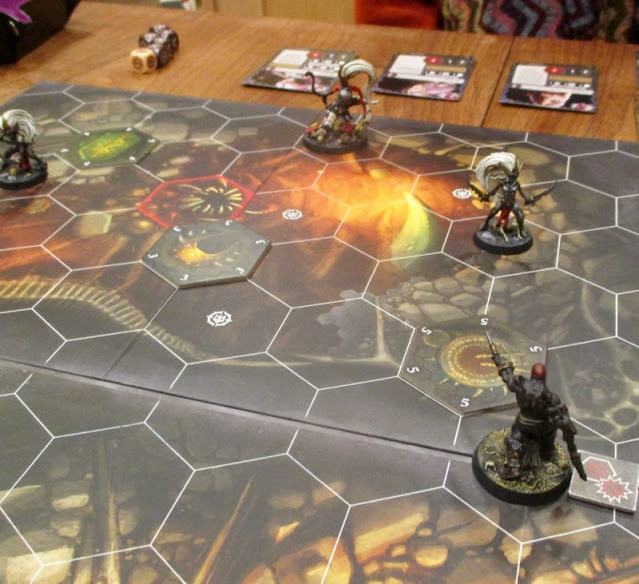 Kyrae took a shot at Arnulf - and missed!

(we realized later that she shouldn't have been able to do so - as she was out of range! Amanda was looking at her move distance instead of weapon range!) 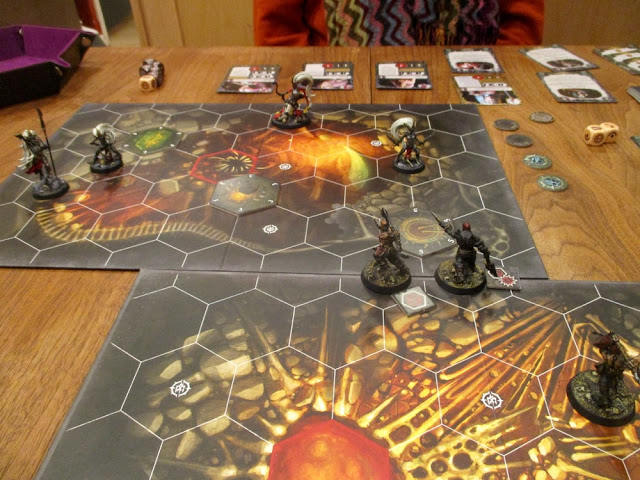 (This is where I realized giving Saek the unstoppable charge would have been useful - he could have charged right through Arnulf and made it into contact with Kryssa.) 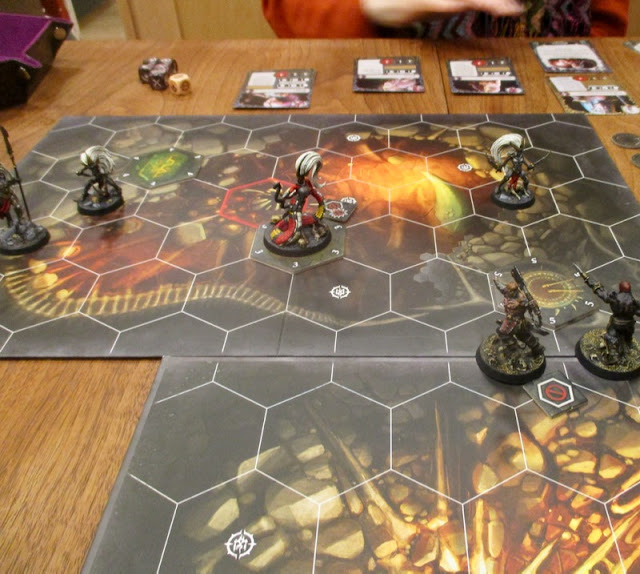 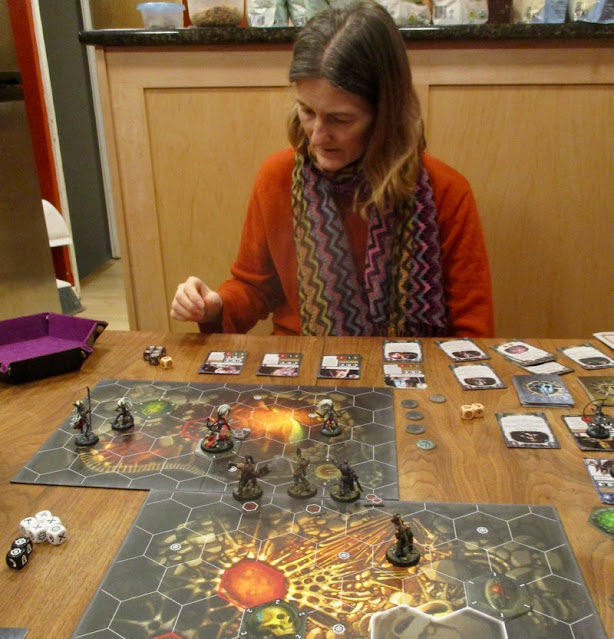 Garrek then moved up.

I doubt that she did this on purpose... but Amanda did really well setting up with lots of distance between her warband and mine - making it difficult to get into contact with her in Round One - a great tactic against Garrek's Reavers as most of their attacks are range 1 only - ONE guy has a range 2 attack and nothing longer... They are also a very aggressive warband - mostly scoring points for killing stuff and give zero fucks at all about holding objectives! 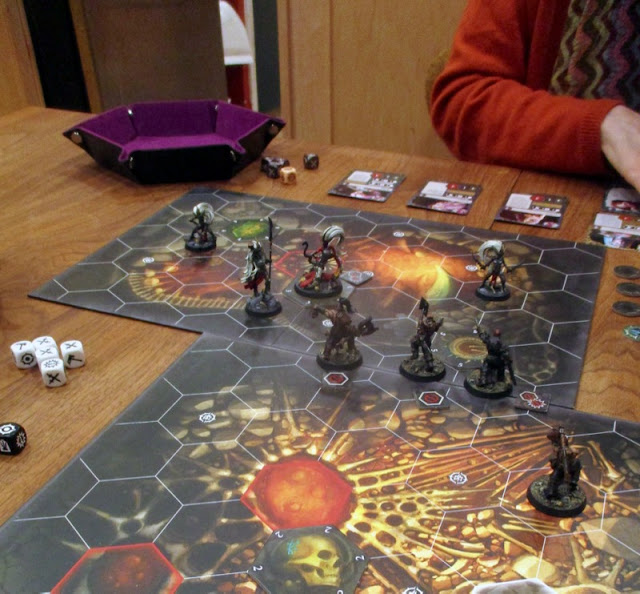 Morgwaeth moved up - standing two away - and stabbed at Garrek - missing.

Again, showing she's picking up this game very quickly - she's figured out that you don't have to stand right next to guys to attack them. Sometimes you might want to - if you have a bunch of warriors in there and they can support each other. But she didn't and Garrek only had a range one attack, so standing two away and attacking meant he would have to MOVE to attack back.

ROUND ONE - END PHASE

Amanda scored two Objective Cards - Purposeful Strike and Triumphant Stance (one was if one of her warriors held an objective an NO ONE else was, and the other was for attacking while holding an objective - both scored by Kyrae) for a total of +2 Glory Points. She used one to upgrade Kyrae with Death Dancer. 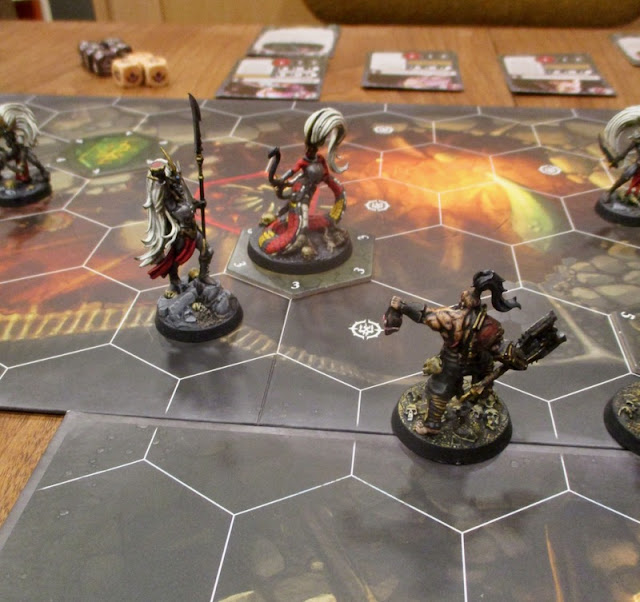 Amanda won the roll-off and started things out by stabbing Garrek and causing THREE DAMAGE! Ouch! 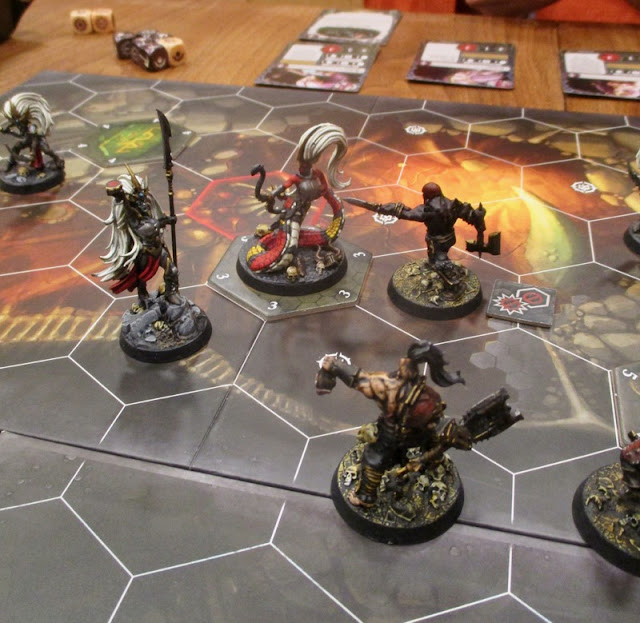 Arnulf charge Kyrae and stabbed her with his Wicked blade causing two wounds... 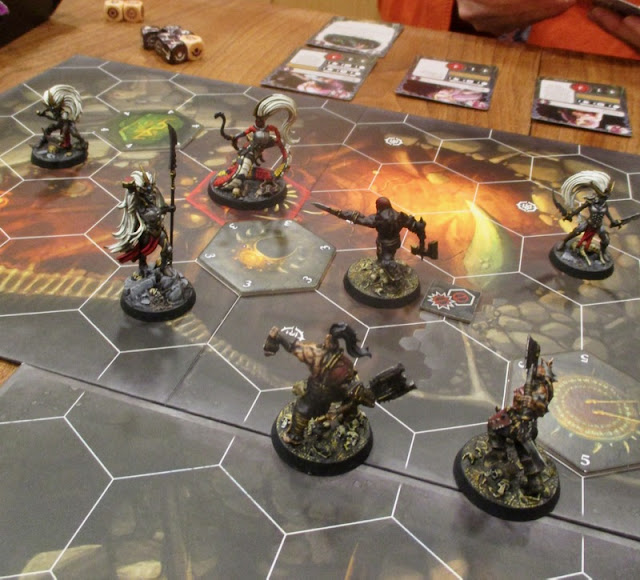 and pushed her back into a Lethal Hex causing a third point of damage and taking her out of action! Woo! +1 Glory for me, evening up the score. I used the Glory Point to upgrade Saek with Berserk Charge. 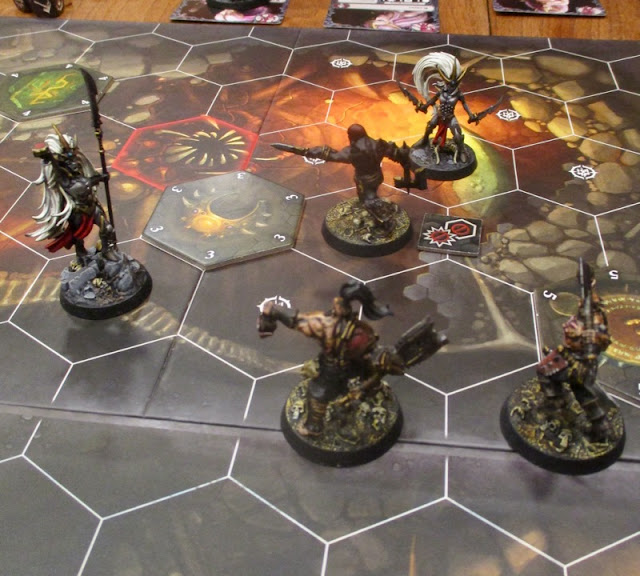 Amanda took the bait and instead charged Kyrssa at Arnulf - and missed. 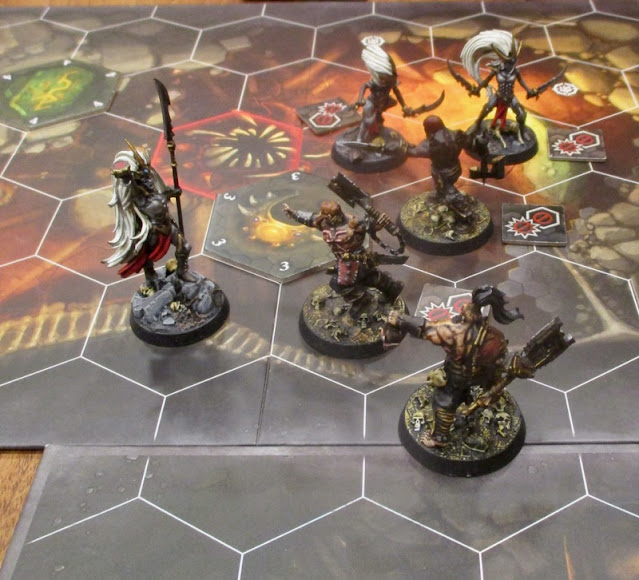 Karsus charged Morgwaeth - and tied - I COULD have pushed her back (which would put her out of range of Garrek) but the would reason I charged Karsus in was to put an extra guy in contact with her so I could charge Garrek or SAek into contact and take her OUT - I had two Objectives that could be scored if I did...

Amanda charged Lethyre into contact with Arnulf and, with Kyrssa's aid, took him out... +1 Glory Point for Morgwaeth and... someone was inspired...?

And that was three warriors out of action - so ALL of my (remaining) warband became inspired and flipped their cards! 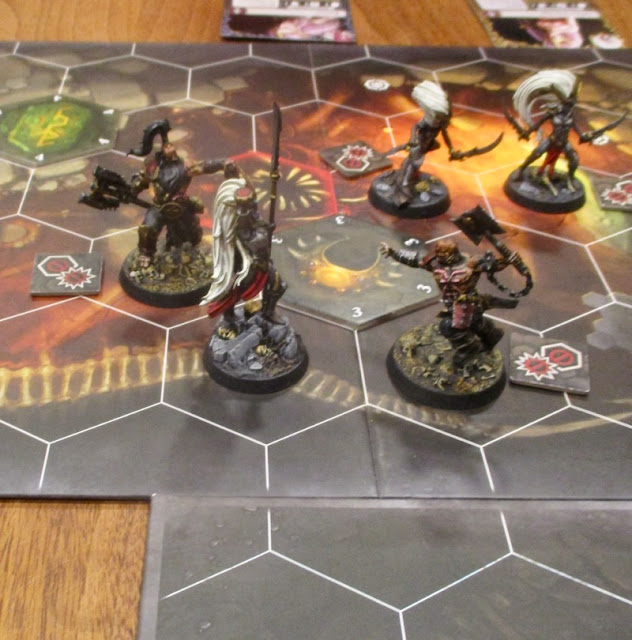 With Arnulf out of the way, GArrek was able to charge around behind Morgwaeth (leaving a space on the other side for Saek to sneak in there!). With Karsus' aid Garrek wounded Morgwaeth - causing 3 Damage! 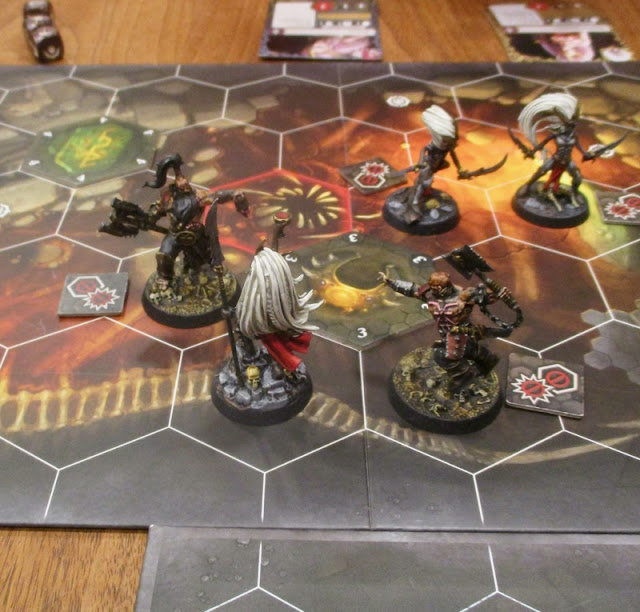 Morgwaeth turned and stabbed Garrek - finishing him off... +1 Glory for Morgweath's 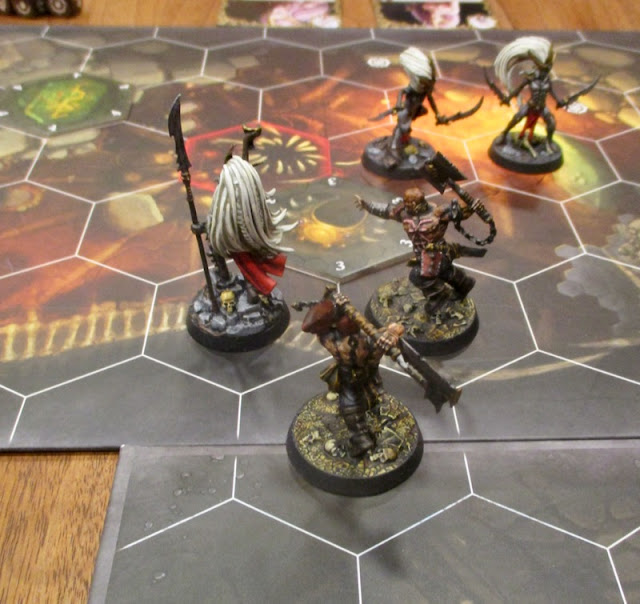 Saek, being inspired, now had a move of 5, which allowed him to charge in behind Morgwaeth... and missed!?

DAGNABBIT!!! Had he succeeded, I would have scored THREE objective cards - one for taking a leader out of action, one for taking out an inspired warrior, and one for having three warriors that made successful attacks this round... GAH!?

Amanda scored two more objectives - Blessings of Khaine and Devoted Disciples for +2 more Glory Points. (I think she'd scored one surge objective during the turn, but I'd forgotten to take note of it)

Things were looking poorly for Garrek's reavers at this point. Morgwaeth's was now winning 8-3...

I kept two of the Objectives I had but discarded the one that require three warriors to make successful attacks - as I no longer had three warriors!? 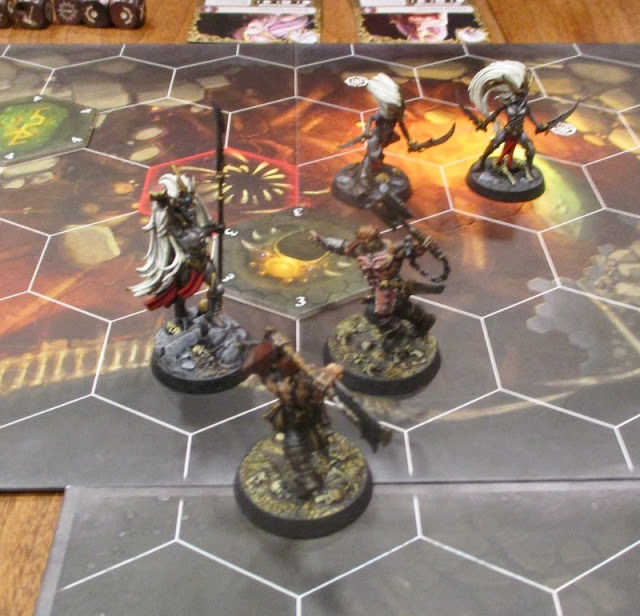 I won the roll-off and started things off with Saek attacking Morgwaeth - and taking her out! +1 Glory... and that fulfilled teh conditions for two of the Objective cards... but both were END PHASE Objectives, so I didn't get to score them (or draw new ones!?).

Amanda played Rune of Khaine (or maybe it was an upgrade Morgwaeth had...?) which did 1 damage to each adjacent warrior when she was taken out of action. Ow.

I was able to play Skulls for the Skull Throne gambit - allowing me to draw two more Power Cards. I also upgraded Saek with Frenzy! 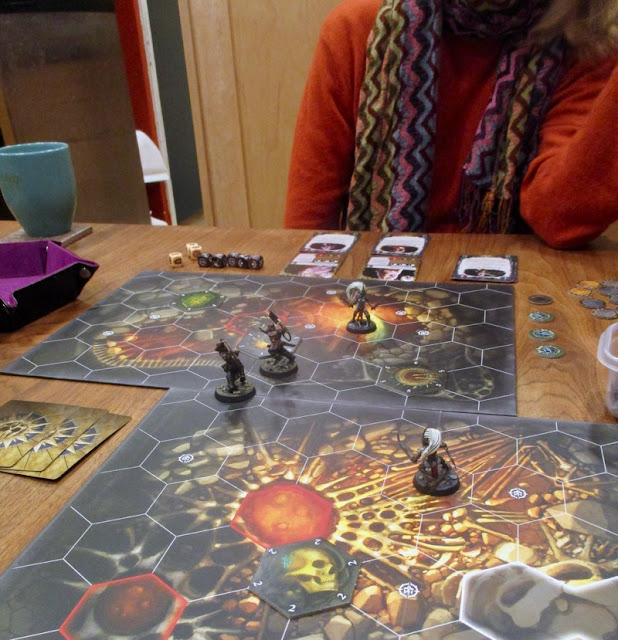 Amanda initially planned to move her warriors into my territory - trying to avoid my guys... I knew they had an Objective Card that allowed her to score points for holding all objectives in enemy territory. I reminded her that moving meant a Moved counter would be placed on Lethyr and she woudln't be able to move again this round (thus she WOULDN'T be able to get to either of those objectives with either of her remaining warriors) - so she changed her mind and Lethyr charged Karsus and took him out... so... that worked out. +1 Glory Point for Morgwaeth's. 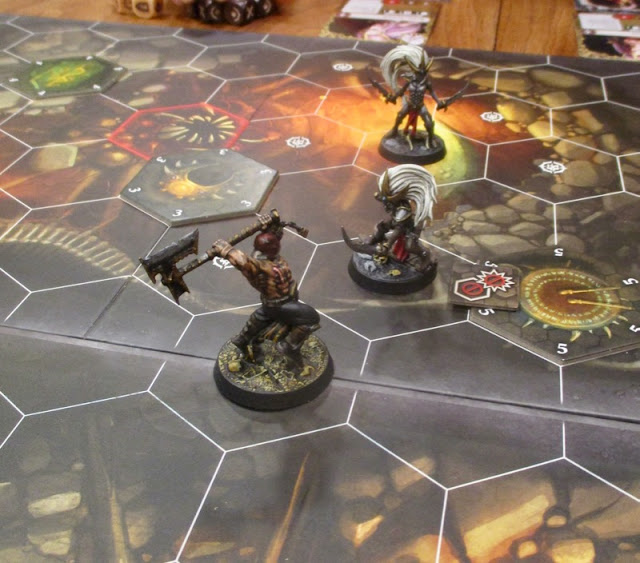 Saek charged Lethyr... but only tied. I was able to push her back - so she at least woudn't be able to provide support when Kyrssa inevitably charged.

She didn't charge... knowing that Saek had charged and wouldn't be able to attack later in the turn, Kyrssa MOVED and was able to use the last two activations to attack Saek - and took him out on the last one...

Morgwaeth's remains undefeated! The final score was 12-7. Amanda said she thought it was a "close one"... I'm not sure how almost DOUBLING my score was a "Close one"...? I think she was looking at it as at the end of hte game only her two weakest fighters reamined... BUT at the BEGINNING of Round Three, she still had her her POWERHOUSE LEADER - along with her two weakest fighters - against two of my middling fighters... who were wounded... I don't see it as being all that close... but whatevs.

Garrek's Reavers has some junk Objectives that are hard to score - like the Dread Pageant they need some tailoring of their Objective Deck to focus on aggressive murder-y Surge Objectives.

This game took about half the time the previous game with Amanda. She thinks she's "slowly" catching on... from my perspective, it seems she's catching on alarmingly fast!

Still having a LOT of fun with this game - despite all the defeats! I picked up two more warbands this past week - found a store in Ontario that still had Thundrik's Profiteers and Ylthari's Guardians and were selling them for their original price!? At this point I'm not going to pick up anymore until I get some of the ones I have painted up! (well... until April... because that Crimson Court Vampire warband just looks rad!).

I have 10 to paint up now... Two Stormcast Ethernals (Stealheart's Champions and Ironsoul's Condemnors, The Grymmwatch Ghoul Flesh-Eater Court warband, Lady Harrow's Mournflight Night Haunt warband, Myari's Purifiers Lumineth warband, Thundrik's Profiteers Kharadron Overlords warband, Ylthari's Guardians Sylvaneth warband, Grashrak’s Ravagers Beastmen warband, Skaeth’s Wild Hunt warband, and Kharga's Ravagers.... I feel like I'm forgetting one...? (Technically, Skeath's and Grashrak's - from the Beastgrave box - I'm not supposed to open up and paint until I finish the frostgrave warriors I'm painting for a firend in exchange for the Beastgrave box... but they are here and need to be done - at SOME point!?)

I really hope I can get Kharga's Ravagers done this week - to try something NEW against Morgwaeth's Blade-Coven! Next week, my plan is to finish up Myari's Purifiers.