The last couple days I've been assembling and priming the Orks from the new Kill Team: Octarius box, because I got it in my head that, y'know, ORKTOBER is a thing and maybe I could get THOSE done. Then, closet-megalomaniacal-brain decided I CAN PAINT AN ORK EVERY DAY IN ORKTOBER!? and decided to fine THIRTY ONE Orks that I could paint.... 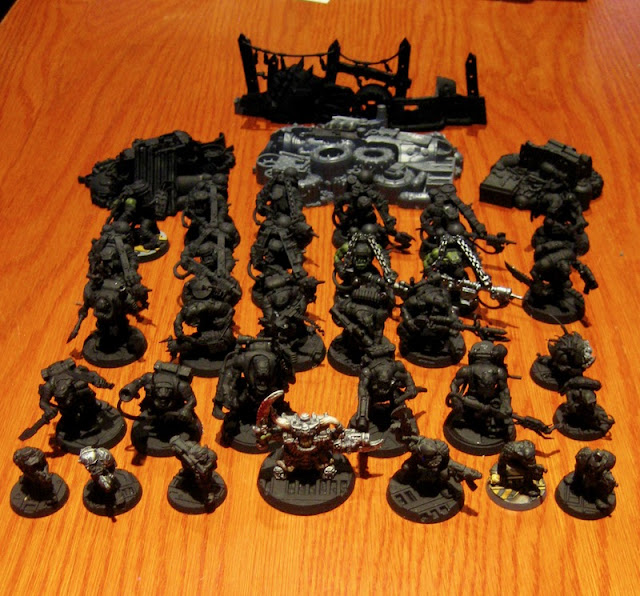 Thirty-One Orks... that I may or may not paint this month.

Ten are BurnaBoyz that I got from a friend that was getting rid of stuff.

Two are just Boyz cobbled together out of spare bitx.

Seven are are older metal Orks - most of which are the size of modern Grots! I thought if I kept them in a unit together - or as a Kill Team operating on it's own - far away from the modern, hulking plastic brutes, know one would know... One of them is a MegaBoss, which I already painted, but I'm re-basing and partially repainting to add some colour (it is mostly painted as steely metal armour/weapons)

I also fretted about what size of base to out the older Space Ork Raiders on... a few wouldn't look bad on the 32mm bases (that Orks are now on) for most it just accentuated how tiny they are compared to the newer models. The MegaBoss went on a 40mm base. One larger one went on a 32mm base - he'll be the Nob or BossNob and the rest went on 25mm bases. I have a PILE more of the metal ones - but I ran out of the fancy Necromunda/Sector Imperialis bases.... but I had just enough to make it to 31.

While it seems like a really FUN idea to post a new Ork every day of the month... I'm not sure that's going to work out... Batch painting is just so much more efficient. And I need to be efficient these days, as I find so little time to paint miniatures.

It's entirely possible that I may just ditch half of these and concentrate on the Ork Kommandos and all the Ork Scrap Fort and Junk Piles from the Octarius box.

(This is still very much a plan in development that probably SHOULD have been sorted out BEFORE the first of October... but that's how I roll: Last Minute Decisions to Embark on OVERWHELMINGLY Large Projects! Yay!)

Also, because I am a MANIAC, I decided I should also do INKtober again this year.... for THAT there should be daily updates on my Art Blog or over on my Instagram Page

(I HAD thought of an Ork-themed inktober... but that might be a bit much!)