An odd assortment of things rolling off the workbench this weekend…

Command section for my USMC Platoon from Empress Miniatures. The figures are listed as “Army”, but I’ve  painted them in MARPAT to use as Marines. I’m not sure how different their kit is otherwise… There’s some minor differences in the figures. Not sure if that’s actually a difference in the cut of the uniform, etc or just style of sculpting… Regardless, they’re “close enough” for my purposes. 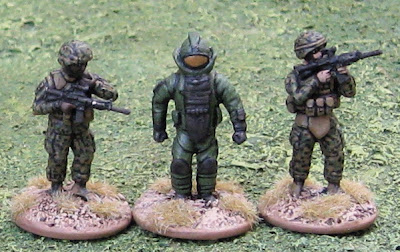 EOD team from the same. 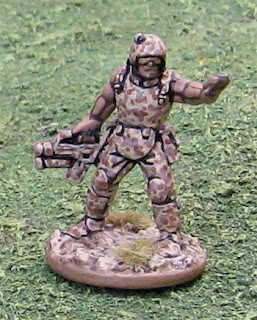 Not really a Marine… He could be a Future/Space/Colonial Marine -  like the ones from Aliens (which this chap is clearly inspired by)? … Anyway… the figure is an old Grenadier Model. This line is currently available from EM4 Miniatures. I have a handful more of  these I’d like to get painted up for Tomorrow’s War.

Oh this will cause my players all sorts of grief and terror… I can hear them now: “There’s a… bunny… He put a bunny on the table… what’s with the bunny? I’m not going near it! Does anyone have a grenade…?”

There was a fourth one in the pack... but I'm saving it for a Hordes of the Things element.

According to Blogger this is the 999th post I've put up on this blog… I think I’ll have to come up with something special for post #1000… Stay tuned….
Posted by tim at 9:00 AM