As it was a quick game we didn’t really come up with any sort of background or names or anything – expect more of that next time!

We played the standard “Bloodbath” scenario – go kill your enemy – kill the mostest, the fastest. 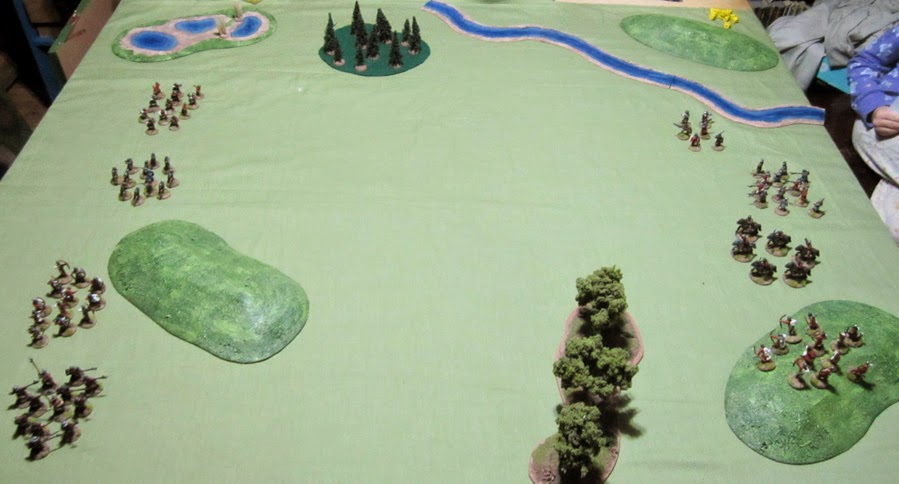 All set up and ready to go – The Boy’s forces are to the left, The Girl’s to the right. 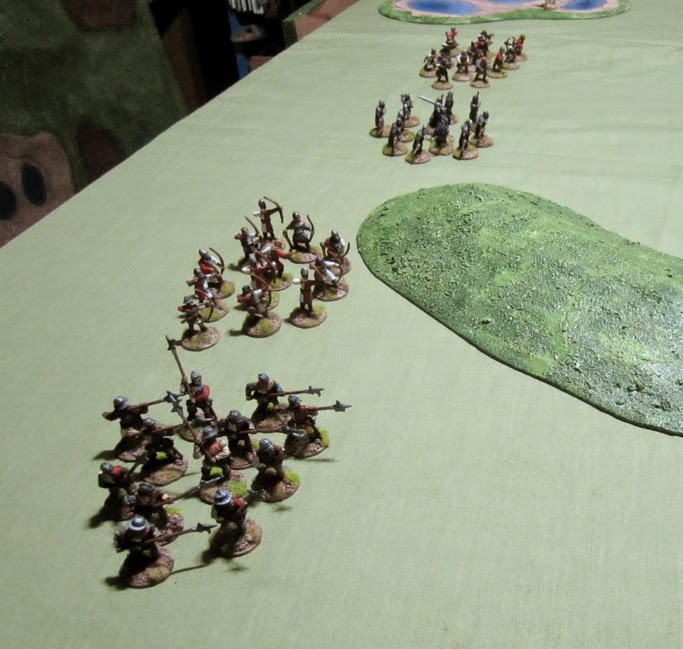 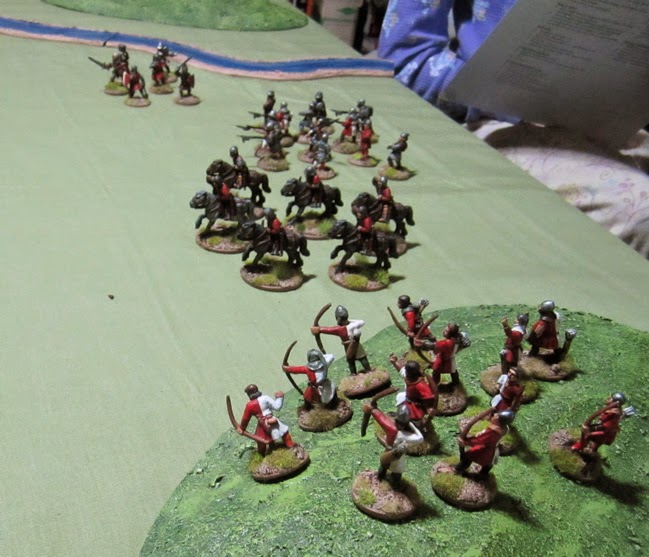 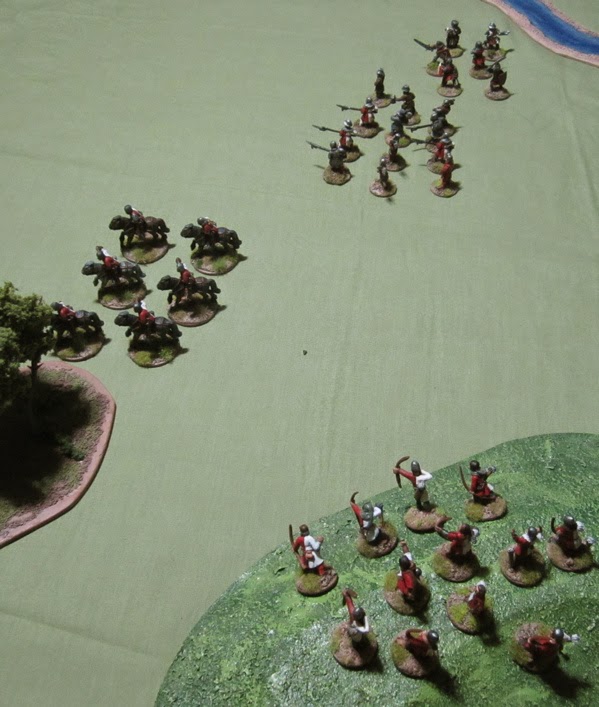 The Girl, being the “attacker”, went first. The Serjeants (mounted and foot) all managed to move forward. The Men-at-Arms failed their activation and ended the turn (so the Archers didn’t move in the first turn either.

The Boy managed to move his two units of Expert Serjeants and the Archers, but the Crossbowmen just didn’t see the point of getting a move on as the enemy were clearly coming to them! 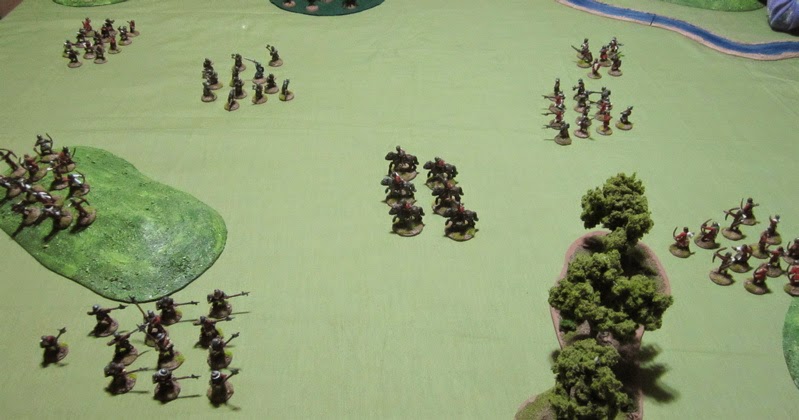 The Girl has managed to get all her forces moving ahead this turn and The Boy has gotten his two units of Serjeants moving….

Then he shot with his archers! 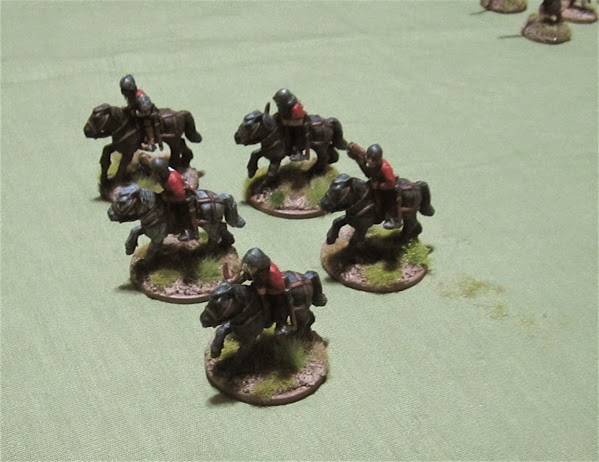 First casualty of the game is one of the Girl’s Mounted Crossbowmen! They passed their courage test and stood firm in the face of… um… arrows…

The boys crossbowmen again decided to sharpen their bolts or grease their levers or something because they were just NOT getting a move on. 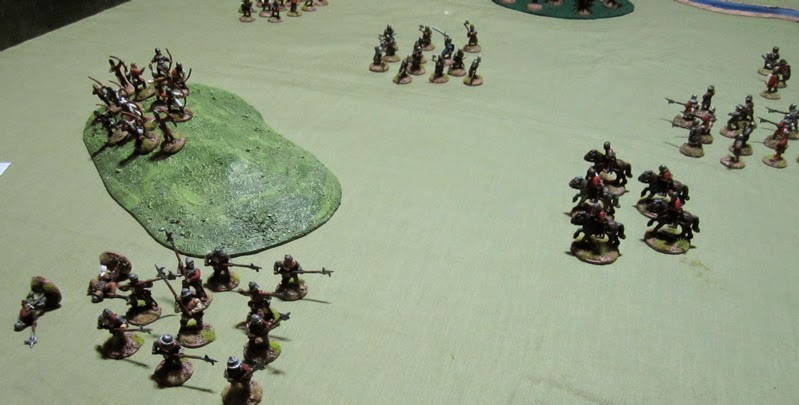 The Girl’s foot all surged forward – angered by the loss of their fellow mounted serjeant! Then the mounted crossbow fired… well… not back at the archers (because they were out of range, and to move closer would have put them in a position where they would be essentially surrounded on three sides), but at the foot serjeants creeping up on their left. 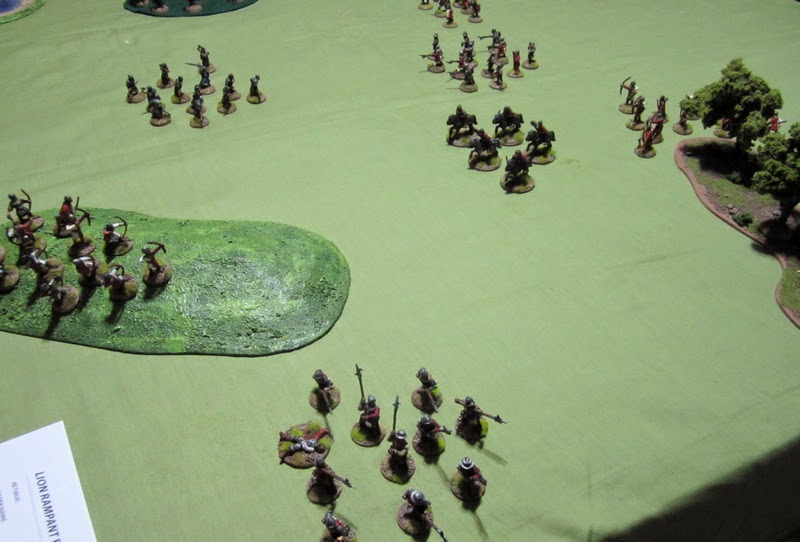 The Serjeants failed their courage test and very nearly fled of the table!

At the beginning of The Boy’s turn the Serjeants rallied! 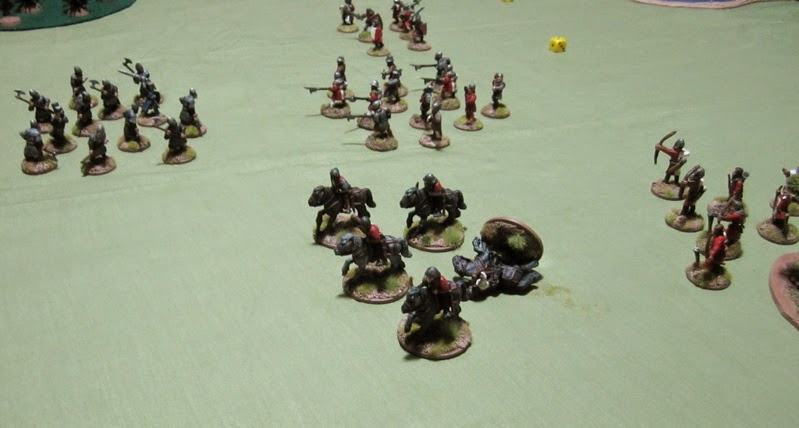 The Boy then retaliated by having his archer rain down more arrows on the mounted Serjeants – taking out a second one! Again, their courage held. 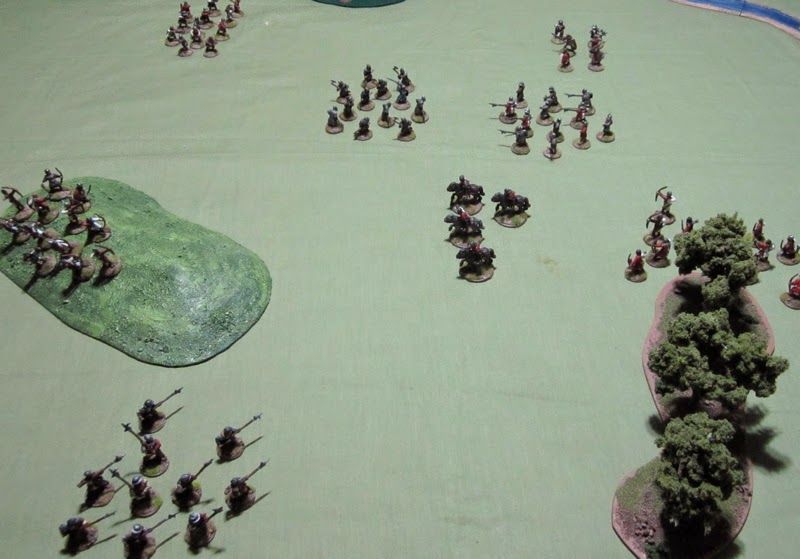 The Other Serjeants advanced and, I think the Crossbowmen may have begrudgingly shuffled forward (I didn’t make a note of it, but they don’t seem quite so close to the table edge here…)

The Girl’s foot Serjeants charged in against The Boy’s Serjeants (which included his leader!). Huzzah! 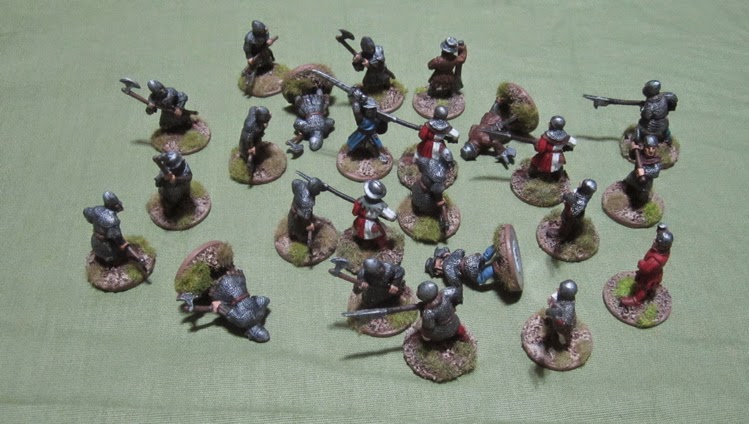 Both sides lost two. The Girl’s Serjeants failed courage and ran away.

The Girl then moved up her foot Men-at-Arms, but the Mounted Serjeants (with the crossbows) failed to activate ending her turn before the Archers could do anything… 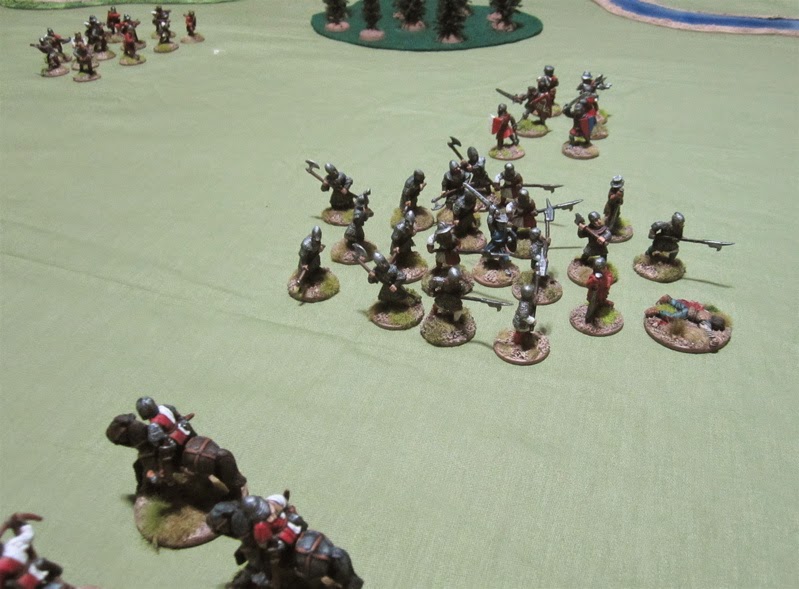 The Boy took advantage of the fleeing, battered enemy Serjeants and followed them up! Neither side caused any casualties… so… The Boy’s Serjeants retreated… which seemed a little odd (as The Girl’s Serjeants were already “battered”)… but that’s how it worked out.

The Boy’s archers shot at the Mounted Serjeants again, but this time caused no casualties.

The Crossbow were up to their usual shenanigans (“No sense in tiring ourselves out boys… they’ll come to us!”) 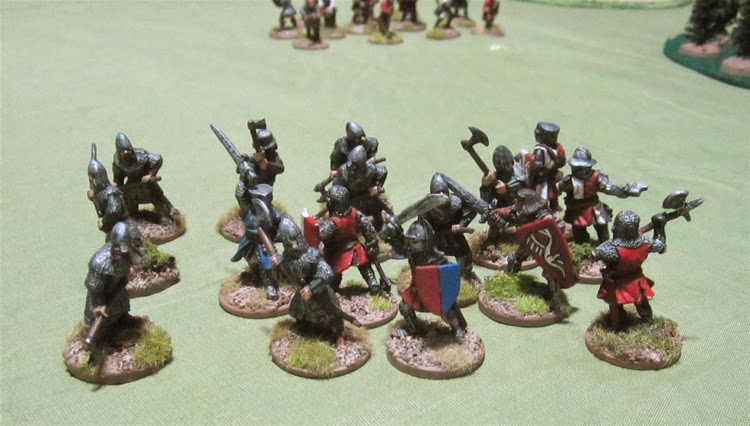 The foot Men-at-Arms charged into contact with the enemy Serjeants! 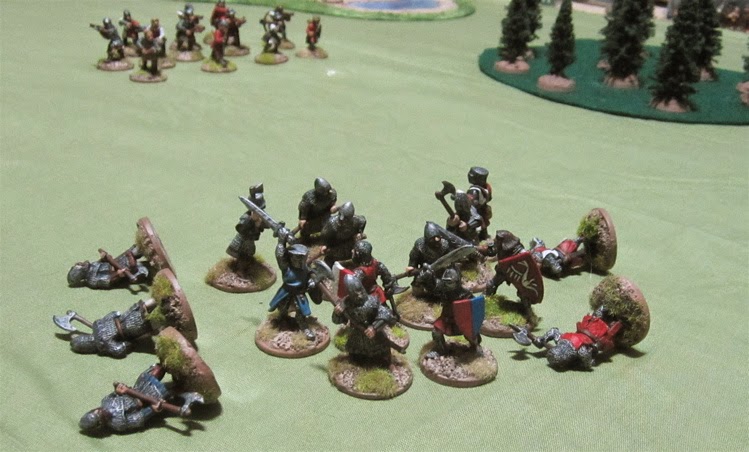 They slew three of the enemy Serjeants, but the Serjeants sold themselves dearly and took two Men-at-Arms with them! 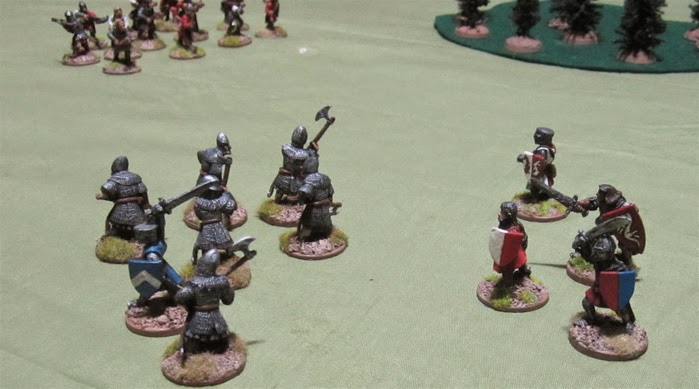 So the Serjeants fled from the Men-at-Arms.

This time it was The Girl’s Archers turn to fail to activate, leaving the mounted Serjeants stranded in the open wondering what to do.

The boy moved his Serjeants away from the Men-at-Arms – thinking his luck wouldn’t hold out against them… the Archers them failed to activate and no one else did anything for the rest of the turn…!? 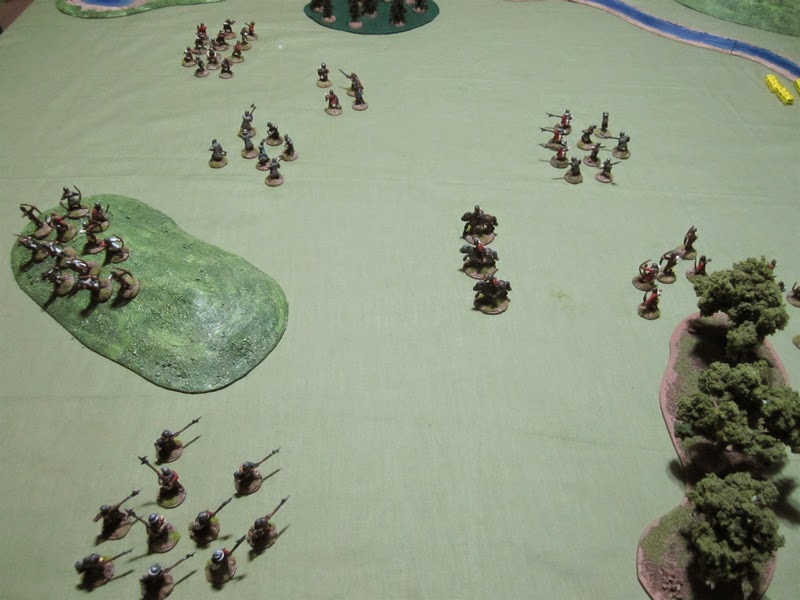 The Girl rallied the foot Serjeants and moved the Men-at-Arms towards the lightly armoured Crossbowmen (as the Serjeants didn’t seem interested in defending them!?). Her Archers, however, failed to activate AGAIN!? That’s three turns in a row that neither her archers nor Mounted Serjeants were able to activate!? Wow…

The Boy managed to motivate his Archers to shoot on the mounted Serjeants, causing another casualty, but not ablt to make them lose courage. Then the Crossbowmen failed to shoot at the Men-at-Arms and so neither of the Serjeants got a go.

The Girls started the turn of with failing to move her Men-at-Arms (and thus everyone else!) 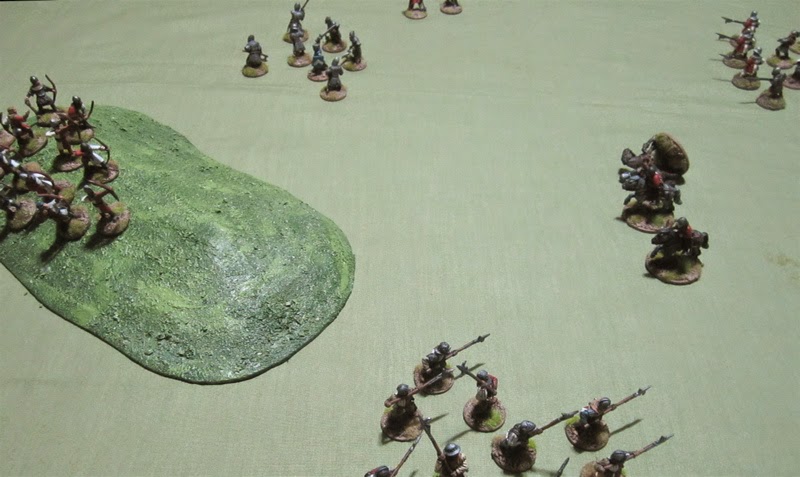 The Boy managed to get his archers to shoot on the Mounted Serjeants, causing yet another casualty!? This time they decided to pack up their crossbows and get out of there! 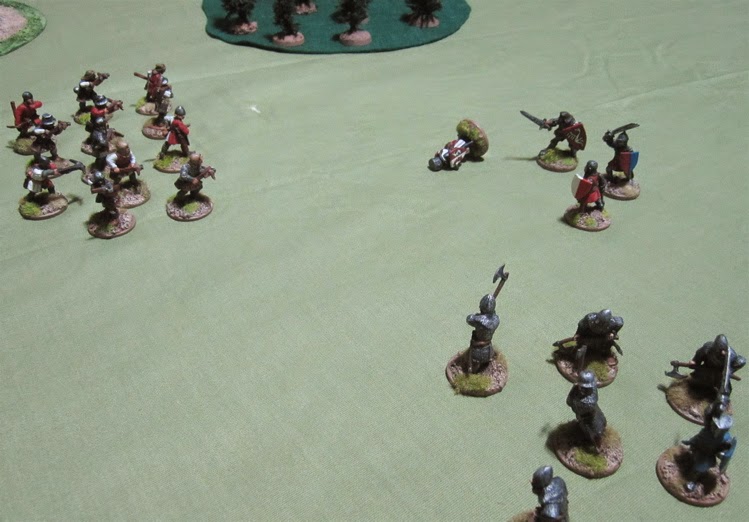 The Crossbowmen FINALLY activated this turn!! They shot on the foot Men-at-Arms and caused… one casualty… Well it was enough to bring them to half strength. 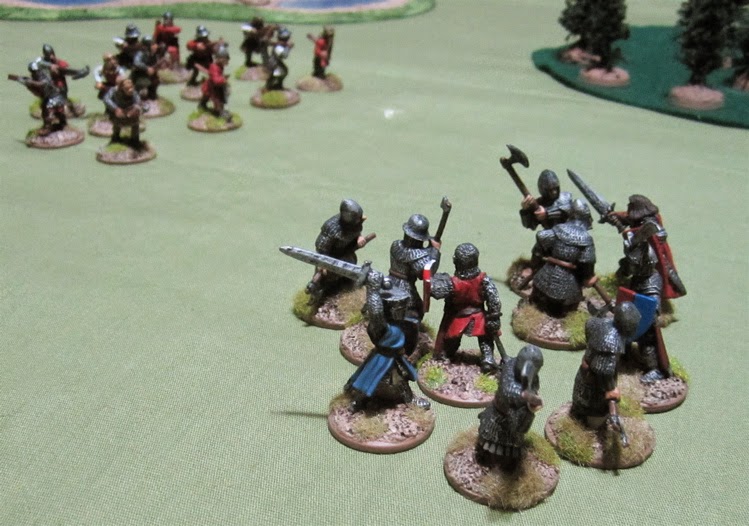 Seeing that they were now at a considerable advantage, The Boy sent his foot Serjeants (with his leader) back into combat with the enemy Men-at-Arms! 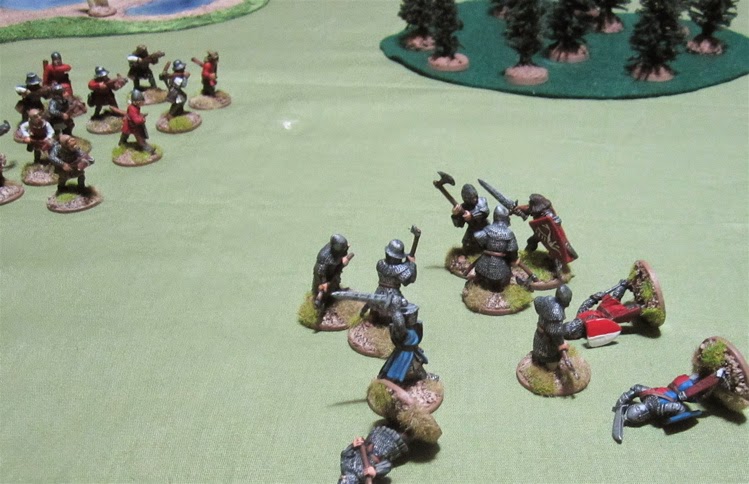 Two of them were cut down! The remaining one super failed courage - the Girl Rolled 3, +1 for leader being there (the only one left) but –5 for the fallen members of the unit. Negative numbers means the unit routs off the table or surrenders – we figured as there was only the one left facing six Serjeants, she probably surrendered herself to be ransomed…

But them the Serjeants also failed their courage test (having lost one of their own) – not enough to rout off the table – but enough to be “battered” and retreat from the fight…?

At the loss of the leader the Girl’s foot Sergeants also lost courage and retreated. 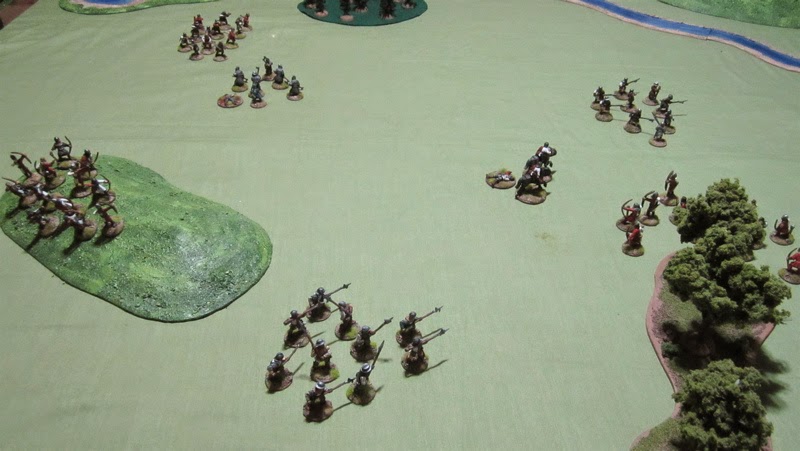 As it was past bedtime and things were looking poorly for the Girl’s retinue we called it a night.

We all thought it was a pretty fun game – we’ll definitely play some more of this – perhaps in the new year when our study of world history brings us to the middle ages. As I had mentioned in the previous post the kids each have a few boxes of Hät plastic 28mm Andalusians and Almoravids (and I’ve been eyeing up some Crusader Miniatures and Perry Miniatures for some possible additions to my own Retinues in the new year…)

It wasn't a terribly bloody game. The Boy lost only 8 Sergeants - out of a force of 48 - and not all of them would be dead. The Girl suffered a little worse - losing the 5 Men-at-Arms, 3 Serjeants, and 4 Mounted Serjeants. Most of those Men-at-Arms were probably just knocked down and couldn't get up for the weight of their armour (lying on the ground yelling "come back 'ere, I'll bit your leg off!")!

They seemed to have the WORST luck with the activations, I wonder how much more damage they could have caused had they actually been able to MOVE more of their troops into range/contact. The Girl's archers did NOTHING the whole game - except move twice - in seven turns!? The Boys second unit of Serjeants took two casualties from the mounted (crossbow-armed) Serjeants. Speaking of them, they looked promising at the beginning - galloping ahead, shooting down a few Serjeants... but then sat doing nothing for the rest of the game - taking the occasional casualty. My kids have played a fair bit of DBA/HOTT and Song of Blades and Heroes, so they are well used to having troops just not do stuff, and, though a bit frustrated, took it all in stride- we have fun making up reasons for why they don't do stuff... but when multiple units don't do stuff for over half the game... I guess everyone was just "shocked and awed" by the violence going on in the middle of the field..?

For all that the game flowed fairly smoothly. The seven turns might have taken an hour and a half, but it sure didn't feel like it. And for a game that I had only just finished reading it though once - I had to look up rules a minimal amount of times. Everything seemed pretty straightforward.

Not sure… We’re busy working on finishing up Hallowe’en costumes this week. Next week I’m hoping to get in some sort of game with the Ancient/Mythical Greeks – probably using Song of Blades and Heroes.
Posted by tim at 11:17 PM