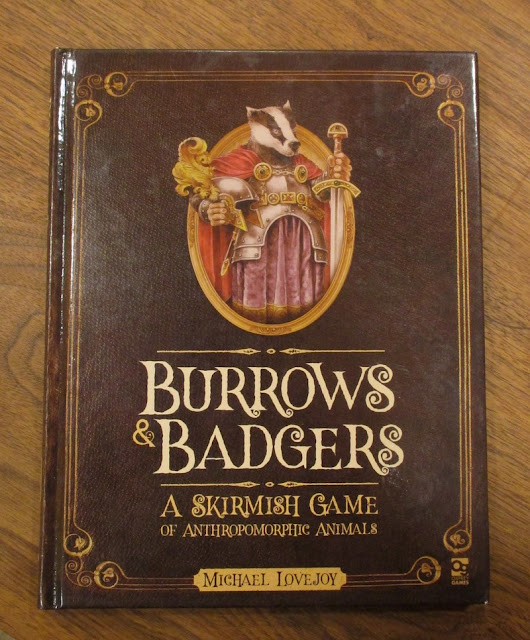 Some time ago, Keira picked up Burrows and Badgers from Osprey Games - because cutesy, anthropomorphic critters! Who could resist!

Occasionally, she hints at wanting to play it.

I've had only the briefest of looks at the game - it is HER game, after all. I kind of expect that SHE should read the rules and teach ME!

I do have a PILE of Skaven that could be used as rats - and an assortment of other anthropomorphic animals that may or may not be of use. The problem is, most of the anthropomorphic critters we have are about the same size - "28mm-ish". The animals in the game, however, are supposed to vary in size - much like their real world counter parts. Oathsworn makes a bunch of really, very lovely miniatures for the game... but I think Amanda will likely execute me if I spent any more money on miniatures this year... but I did pick up those wooden pegs and got to wondering what I could do with them... 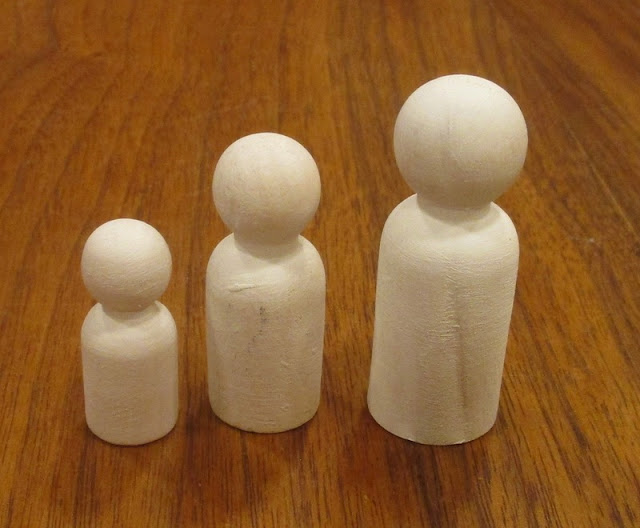 Conveniently Pegs come in a number of very different sizes! I have three so far 35mm, 42mm, and 55mm (I've also ordered a few that are 65mm and 75mm). I figured I could MAKE small war bands of animals using the various different sizes of pegs - 35mm for the small animals like mice and bats and small birds, 42mm for the medium sized animals like rabbits, cats, ferrets, and Toads, 55mm for the larger animals like foxes, hares, and hounds, and the 65mm pegs (when we get them) for the truly massive beasties (relatively speaking) such as badgers, beavers, large dogs, and large raptors. 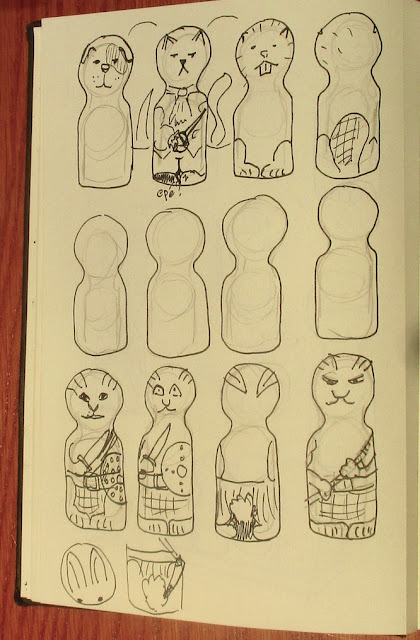 I did some doodling in my sketch book. At first I thought I'd do them as "paint only" pegs... 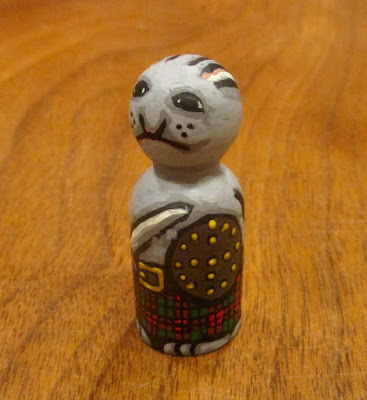 And I tried starting with a highland rabbit 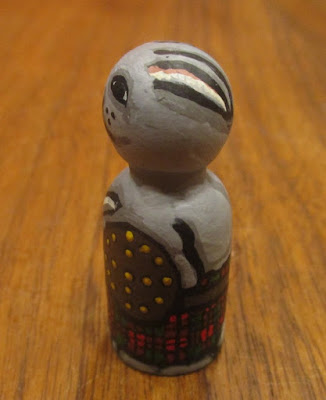 I don't know... I'm fairly pleased with how the tartan turned out.... 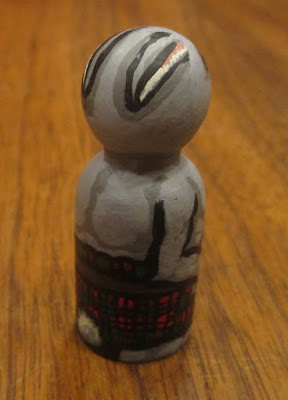 but the ears aren't really working for me.

maybe if the eyes were a little lower and the ears started lower... 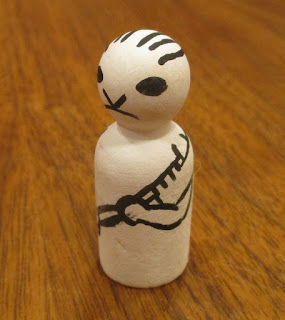 I started another one - this time with a Lochaber axe... but was feeling a little underwhelmed by it. 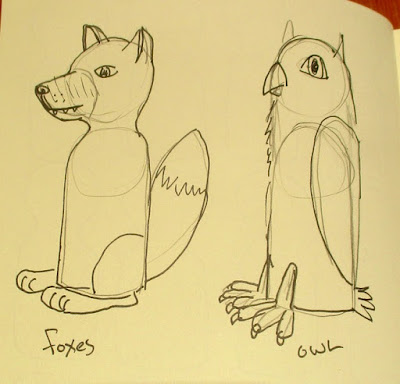 What if I tried modelling on some slight detail with milliput... 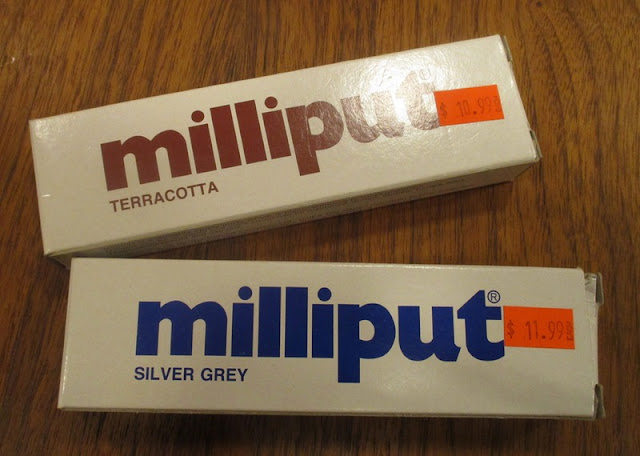 I was thinking milliput because I knew my FLGS (Dragon's Den Games) had some and it was considerable less expensive than green stuff and, it's been a LONG time since I've used milliput, but I felt like it would adhere to wood as well as anything else... I'd kind of forgotten how... I'm not going to say "difficult milliput is to work with"... let's say "DIFFERENT milliput is to work with". It took some getting reacquainted with... 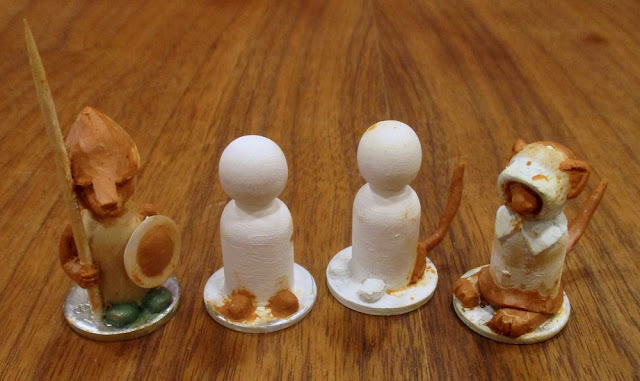 Some mice I started making with the small (35mm) pegs - trying out both types of milliput I picked up. (I has started on some feet with green stuff before I picked up the milliput).

Highland Bunnies! I am all about the bunnies (I blame Monty Python). This will probably be my main warband... if... y'know... I ever get around to FINISHING THEM (I started on these a few weeks ago, actually, but then had to put them away to concentrate on getting things ready for the Necromunda Weekend). These are done on the medium (42mm) pegs.

The one with the upright ears does have a wire armature underneath! - as do most of the critters with larger more extended tails! 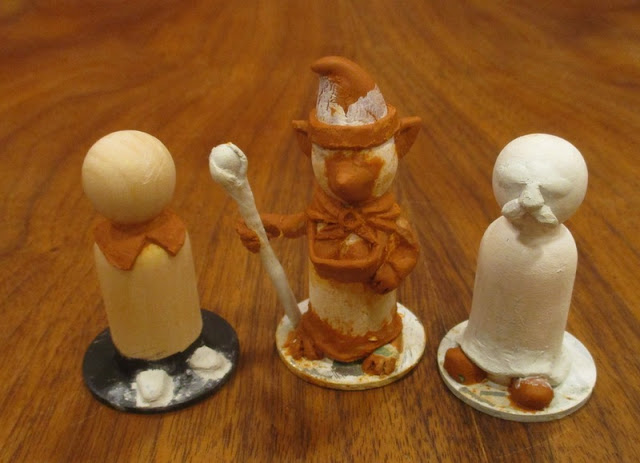 I also started on a few larger (55mm) ones. A few of these I originally started as generic fantasy dungeon crawlers, but they're being converted into critters. I thought I might make a warband of foxes for Amanda to use - the Foxy Vixens!

Backsides - to show off their tails (and the pleats of the one kilt I've finished). Is that fox tail big enough? I didn't want to make it TOO HUGE...

Of course in practice, modelling on details (rather than just "paint-on" details) means that now each model will be an individual hand-sculpted master piece!? GAH!? Who has time for this!? Ah, well... I was having a LOT of fun doing this, and that's what this is all about, right? "Having fun"...? 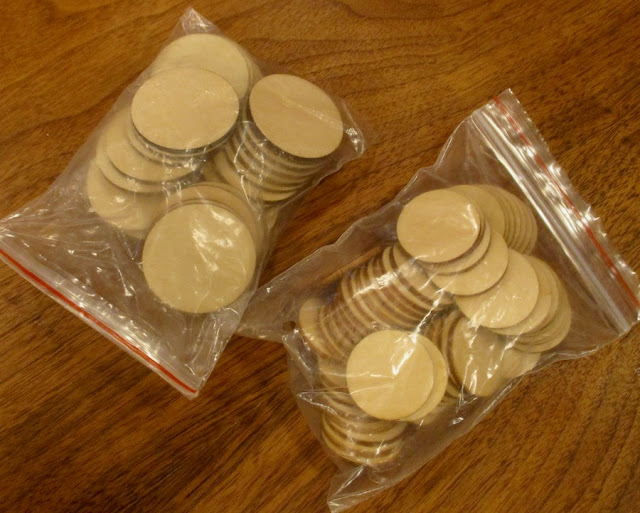 Some wooden discs arrives in the mail yesterday - thought I might use these instead of the washers I've been gluing them on to so far... of course, these are not the same size as the washers... so I'll have figures on different sized bases which really tweaks my OCD...

Of course none of this was considered in THE PLAN, so, assuming I stick to it, I'm not sure when I'll get back to these... probably the next time Keira brings it up, I'll drop everything and start working on them again!

For some reason, one of my favourite lines from any movie ever comes to mind:

"You'll laugh at this one day. I'm laughing already..."

A painting update of some sort.

Might be finishing off some Necromunda stuff, as planned...

Or maybe a band of surly Highland Bunnies (with their wee mouse friends)!