A number of things have got me back to thinking about the Vimy Project. Primarily a renewed interest in the early 20th Century (along with the late 19th…) and along with it a re-visitation of the Contemptible Little Armies/Ever Victorious Armies rules. I’ve also re-based all the Great War stuff on single bases (thought bigger ones than they have previously been on). Thinking about what to run at Toon Con - the new convention in Saskatoon this fall.

For those not aware in 2006/2007 I embarked on a project that, originally, would ultimately lead to playing the attack by the entire Canadian Corps at Vimy Ridge on the 100th Anniversary in 2017. I meant to built the terrain and forces incrementally; at the 2007 Mayday convention in Edmonton I hosted a game of the Fourth Canadian Division’s attack at the north end of the line. every couple years I had planned on building the terrain and forces for the next division down the line (3rd, then 4th, finally 1st.…).

By the end of 2007 I’d kind of lost interest in the Great War and, despite the Vimy game’s success, REALLY lost interest in Contemptible Little Armies. I had re-based all the Great War figures onto multi-figure bases and tried a number of different rules and variants (mostly of my own devising). And nothing seemed to work out so I just walked away from the project for a while.

Briefly a year or so ago we experimented with a variant of DBA that seemed promising. I even ran a Weekend Campaign using the system. Shortly after that (probably because of it) I lost interest in those rules.

A rethinking of rules and basing at the end of last year got me re-basing again and, as I mentioned above, all those figures were re-re-based back onto individual washers.

During all this I occasionally thought about reviving the Vimy Project, but always it came down to I’d have to absolutely settle on some rules and a basing system. If I were to keep them on the multi figure bases I would have to do some serious modify the existing terrain to make the much bigger bases fit!

Well I’ve settled on the basing (no, really…). And I’m thinking I will return to the modified version of CLA that I used in the original game… though perhaps with a few more modifications.

Serendipitously, I’ve seen a number of pictures of an ANZAC Bay/Galliopli terrain board the Wargames Illustrated commissioned for a demo game at 2011 Salute that got me pretty stoked. It looks pretty much how I originally envisioned the Vimy terrain looking… unfortunately in 2007 I ran out of time and never got around to adding the sort of details I had originally wanted.

(you can see the pictures of the ANZAC Bay terrain on Facebook or at the Lead Adventure Forum - They're really quite stunning - and INSPIRING!). 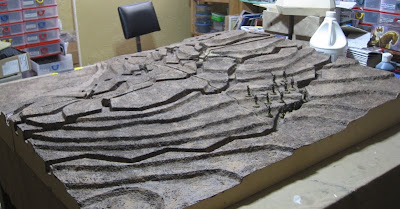 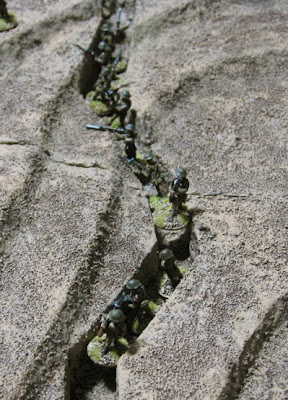 As I had feared with the bigger bases the figures barely fit into the trenches… which isn’t such a big deal as I’m feeling pretty stoked to do some work on them and get then looking a little better anyway.

Most of the trenches I’ll have to cut and widen up. The I’ll add some revetting and duck boards and some sand bags on the paraphet. The Revetting and duckboards witll be easy enough, but I’m not entirely sure how to best go about making sandbags…. Cheaply…

I could potentially be back on track for the bigger project too… in 2012 I could work on the third division, 2014 work on the second, and 2016 get to work on the first so the whole corps attack could be played in spring of 2017…

So that’s one of two projects I’m going to be trying to focus on for the rest of this year. This one shouldn’t be too much work as all the figures are done, all I really have to do is make the terrain prettier.

The other project will be the Zulu War… more on that in a bit…
Posted by tim at 11:23 PM