The Battle for Boglen Wood

We finally kicked of a campaign for Song of Blades and Heroes this week, the kids and I. WE are using the advanced campaign rules from Song of Deeds and Glory. Hopefully Amanda will join in the shenanigans when (if) she has a chance. I said we’d commit to a short, six game campaign just to try out the system.

Finnegan has come up with a Lizardman warband and Keira has a band of Humans. They decided both of them are searching for an ancient magical artifact in Boglen Wood. I’ve put together a little band of human men-at-arms under the command of Baron Phillipe de Lapin – whose land borders on Boglen wood and has decided to pacify the wildlands and add it to his meager domain. Amanda, we figured, would probably play elves and would simply be resident in the woods and not too terribly excited about humans and lizardpeoples messing about in “their” wood…

To start off Finnegan and Keira’s warbands played a Treasure Hunt scenario – they decided they were looking for a clue for where the ancient magical artifact is hidden. 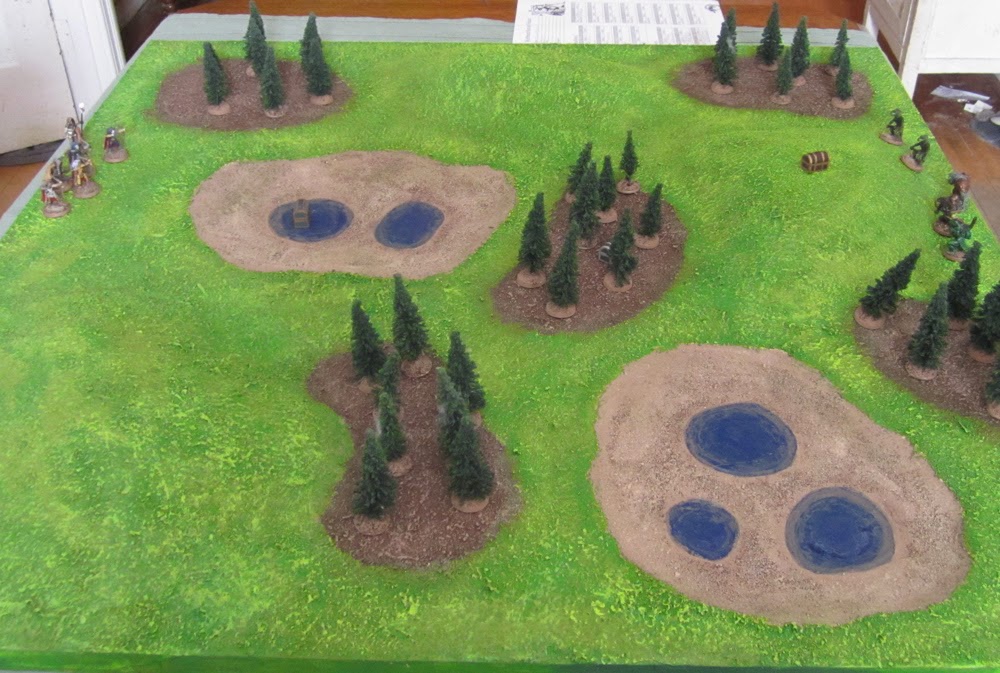 The field of “battle” 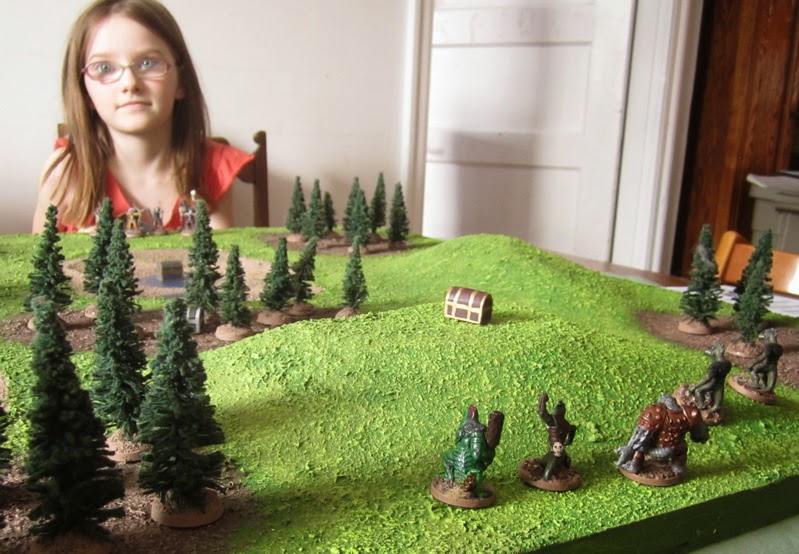 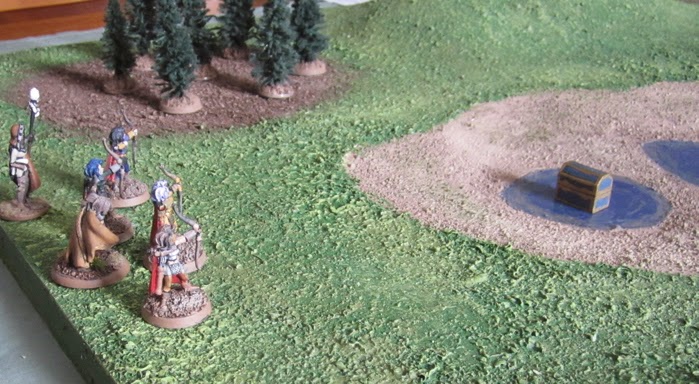 There was one relatively close to her own starting position, but… 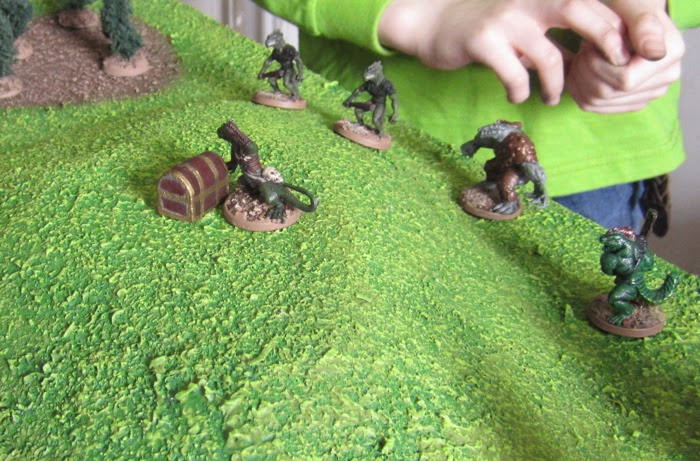 First Turn, first move… Lizardman Warrior #1 ran up the hill and rolled a 5 finding the treasure in the first location they checked… 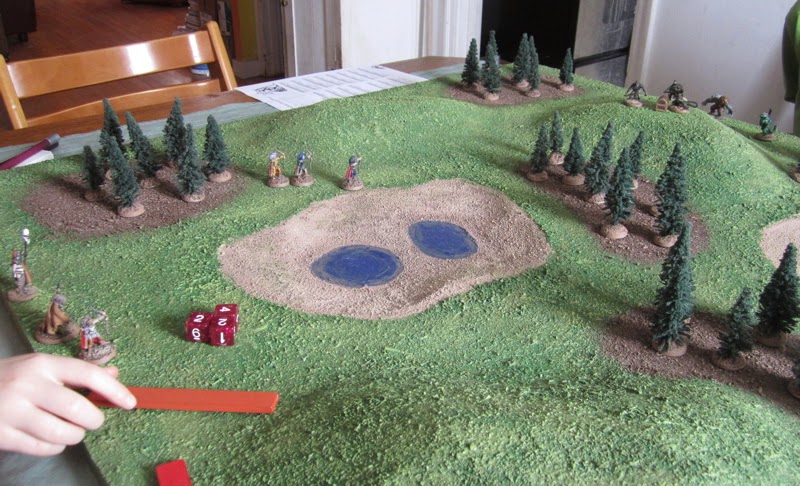 Keira tried her best to get her warriors across the table and take some shots at the lizards, but they just slipped off the table and claimed a 5-0 Victory Point win… maybe not the most “satisfying” of tabletop games… but, hey – it’s a campaign, it’s a win, everyone got experience, no one died…

So in the after-game sequence… there were no casualties to check on the status of… Both of them got 20 gold coins income. During exploration The Lizards found a blessed glade and walked out of there with a charmstone (which Finnegan gave to his champion). The Explorers went exploring… and got lost… so they start their next game with -1 initiative. Everyone collected an experience point. The Lizards got a campaign point and that was that…

Later in the evening Finnegan and I got in a game… 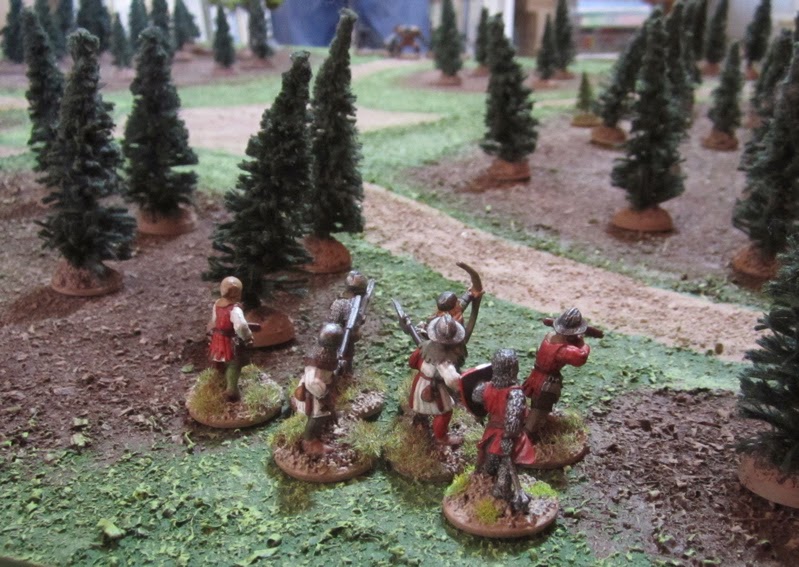 The Baron and his men enter the woods. 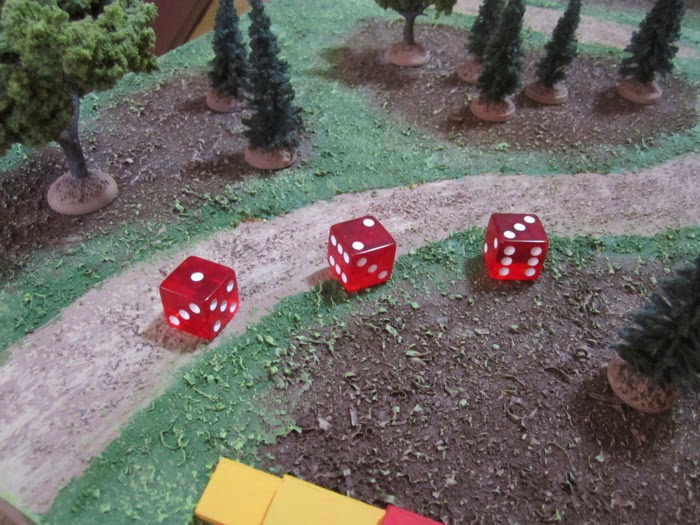 The Baron rolls two failures on his first activation. 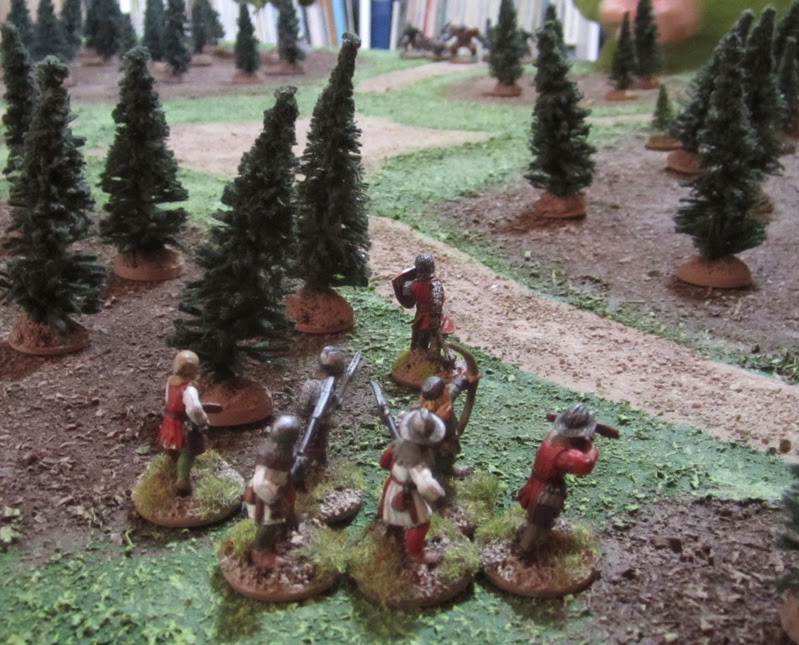 See what I managed to do there? The lads, I guess, decided to let the Baron lead from the front… an inauspicious start to a campaign… 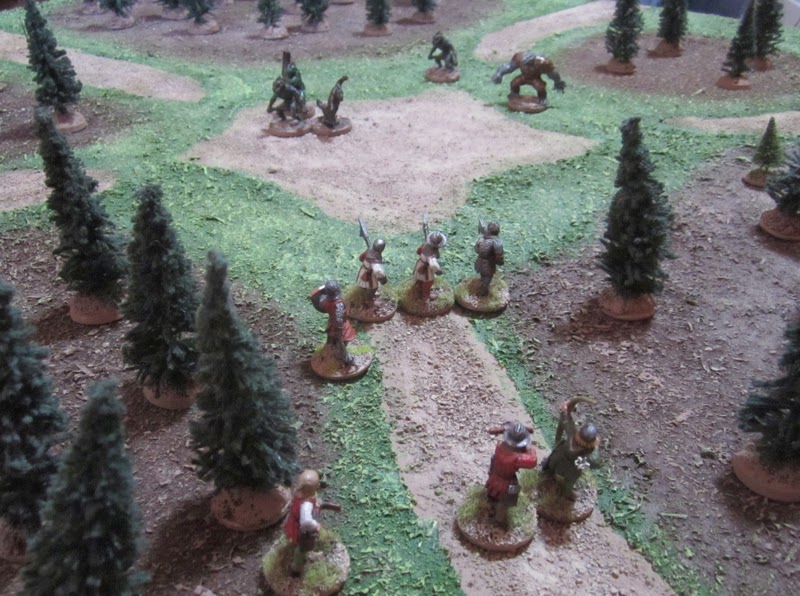 The Lizard’s rushed across the table and Baron Phillipe’s Men-at-Arms rushed to meet them on their second turn. 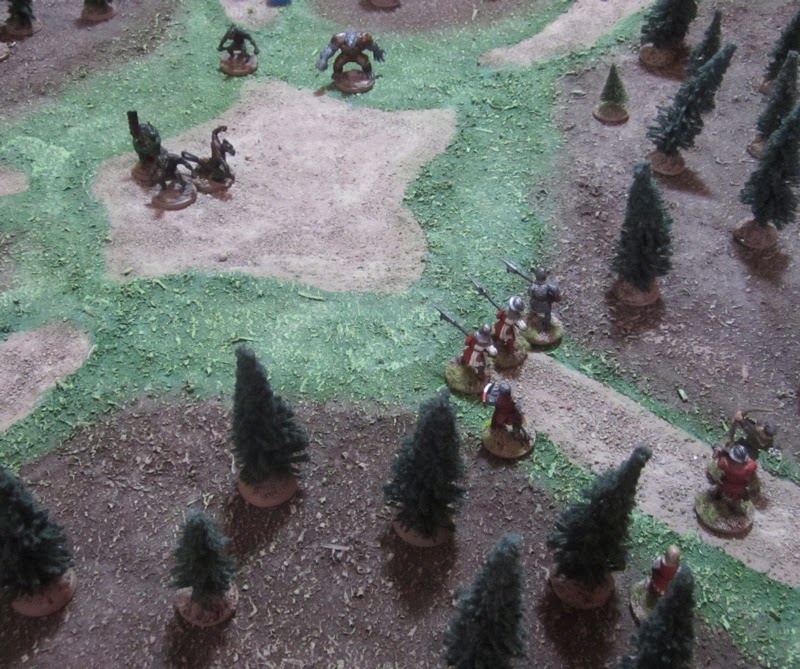 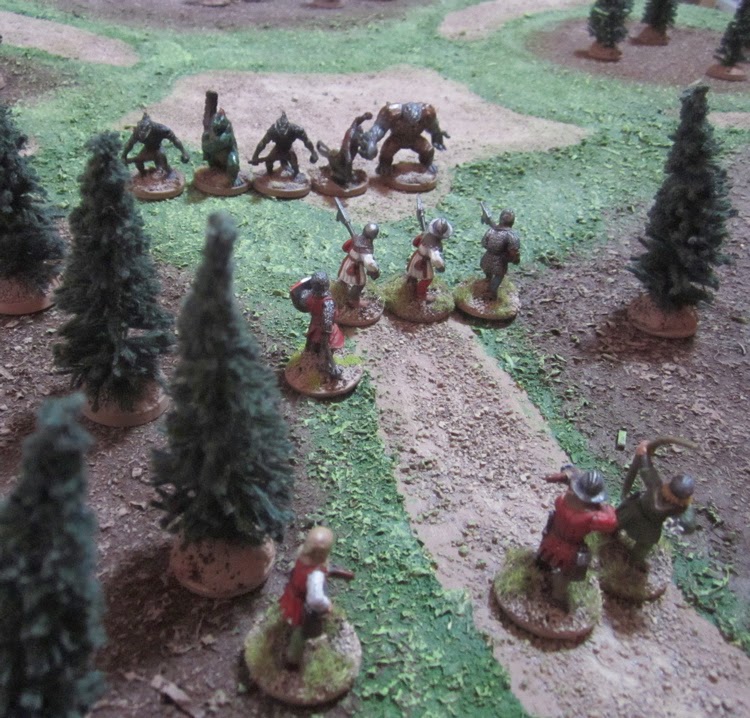 I, on the other hand, was plagued with crap combat rolls… Archery fire caused one recoil in the entire game. 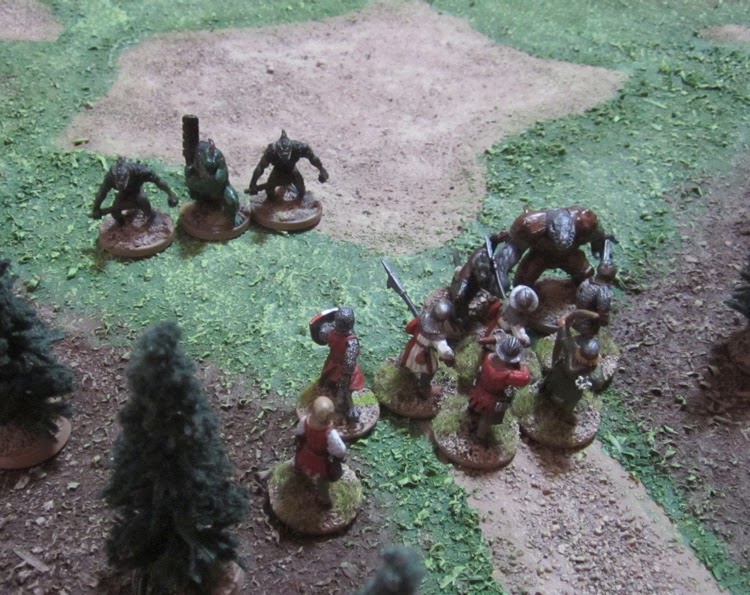 The only way I could take any of his guys down… 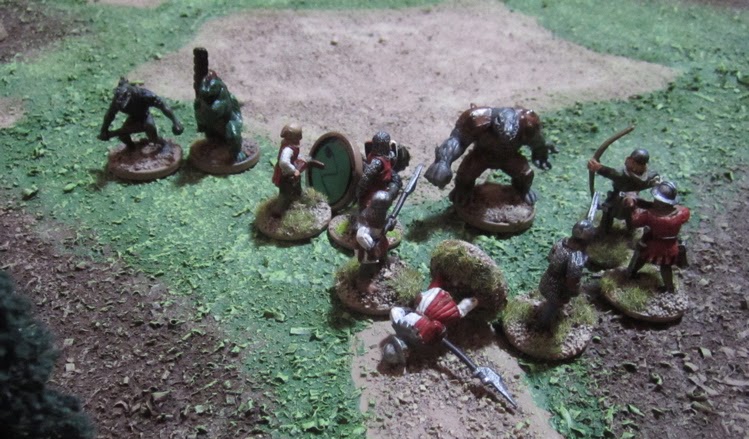 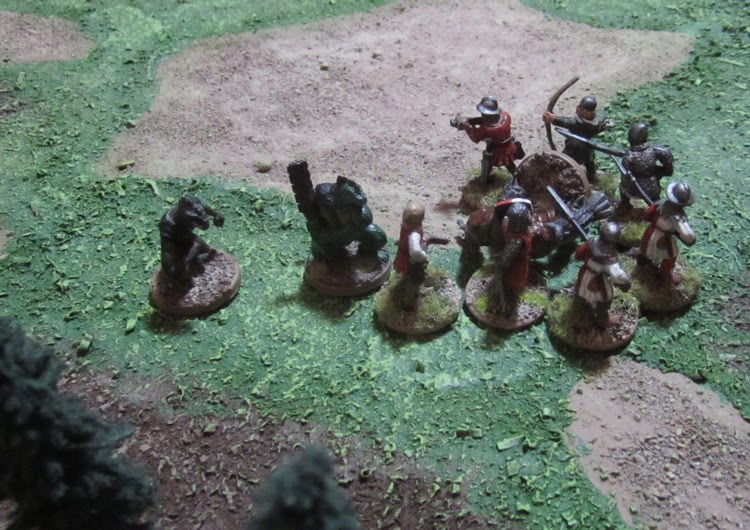 Or 6 to 1… in the case of his “Tough” champion. I was only able to do this because he kept failing so badly on the activation rolls…

Man I hate fighting “Tough” characters… They are SO hard to take down… Not impossible, mind you, but very, very hard.

In the battle Finnegan lost his champion and two lizardmen. The Champion had a full recovery and will be back in action for his next game. The Lizardman warriors weren’t so lucky. One will have to miss a game, due to serious injuries, and the other will be fighting in his next game with reduced quality…

After checking on that the lizards collected another 30 cold and I collected 40. While exploring the Lizards came across a forgotten Keg, while my lads were harried by a Murder of Crows (and will only collect HALF the regular income next game!?)

With my bonus cash I recruited another man-at-arms; Louis – another foot warrior. Finnegan’s run out of Lizardmen so he’s had to recruit a Bugbear. Keira only wanted to buy a spell scroll for her Wizard’s Apprentice.

The next round of the campaign – Keira’s and my own humans battle it out.
Posted by tim at 7:32 AM