Starting in on the 1st Division – or adding to it, rather, as I already have a few of the units done… or… PART of a few units done… This one, for example, I had painted the officer and one of the NCO-looking guys (holding rifle and pointing) YEARS ago… They’ve been touched up a bit – new colour on the helmet and repainted the formation patch to match the rest of the rest of the troops.

The 10th Battalion was originally recruited from militia units in Winnipeg and Calgary. The sailed to England in 1914 as part of the 2nd Brigade, 1st Canadian Division. 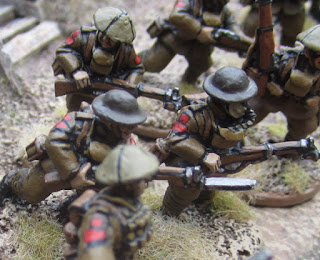 Detail of the formation patch. The Red patch of the First Division surmounted by a Red square (Red for the middle brigade of the division and the square for the junior battalion in the brigade. 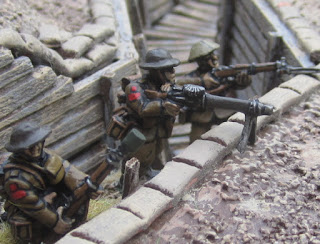 There are actually two lewis gunners pictured in the group shot above. The pack of lewis gunner came with 8 or 10 - of which I only needed four. half of the Lewis gunners were prone and the other half were standing with gun out in front of them presumably to be used as though it is braced on something (like, say, the parapet of a trench), as above, when defending trenches.

Don't get me started on the prone figures...

At least Old Glory has a FEW kneeling figures I could add into the mix... one per unit... but at least not ALL of the other figures are standing while the Lewis gunner is prone.

Odds and Extras and Other Minor Distractions

Then the 5th (Western Cavalry) Battalion, CEF
Posted by tim at 3:28 PM