The 8th Battalion, CEF,  was originally recruited from 90th Winnipeg Rifles. While most of the battalions of the CEF sported cap badges with a maple leaf motif, the 8th Battalion had a cap badge with a running devil with a scroll beneath emblazoned with the motto “HOSTI ACIE NOMINATI” – Named By The Enemy. The enemy, in this case, was the Metis of the Northwest Rebellion of 1885 who apparently referred to the Winnipeg Rifles at the Little Black Devils on account of their dark rifle green uniforms.

The 8th Battalion was part of the 2nd Brigade of the 1st Canadian Division. 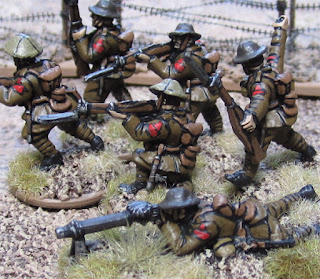 Detail of the formation patch. The red patch of the First Division surmounted by a red triangle (red for the middle brigade of the division and the square for the third battalion within the brigade). 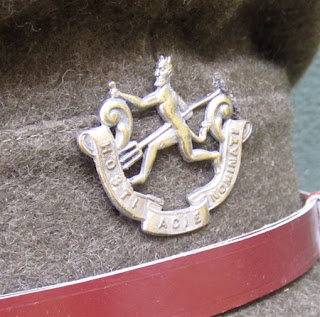 I actually have one of the cap badges (the hat is a reproduction).

The final battalion in the brigade – the 7th (British Columbia) Battalion.

Then… onto the first brigade…? or maybe finishing up some stuff for the third brigade? I’m using Wargames Foundry figures for the First Brigade and though I have a few on hand, I don’t have enough for the entire brigade. I ordered enough this past week to finish up the brigade, but I’m not sure if they’ll be here quite quick enough. I do have a few figures to finish up for units in the Third Brigade. The Third is made up of two units of highanders using the very first miniature I eve modeled and cast, one unit of highlanders from Old Glory Miniatures (which is mostly completed – I just have two or three extras I need to bring the unit up to strength), and a unit of figures from the Foundry.
Posted by tim at 9:45 AM