Princess Patricia’s Canadian Light Infantry was raised in 1914 by Montreal businessman and Militia officer Andrew Hamilton Gault. The regiment was named for the current Governor General’s Daughter, Princess Patricia of Connaught. It was apparently the last privately raised regiment in the British Empire. Initial recruits were mostly made up of British ex-servicemen.

The Regiment preceded the rest of the Canadian Expeditionary Force overseas and joined the 80th British Brigade and were the first Canadian unit to see action in the Great War. A year later in 1915 the regiment joined the newly formed 3rd Canadian Division as part of the 7th Canadian Infantry Brigade.

This was the last unit I had to paint to finish up the brigade. Also in the Brigade were Royal Canadian Regiment, 49th (Edmonton) Battalion, and 42nd Canadian Infantry Battalion (Royal Highland Regiment of Canada). As I already have the 8th Brigade finished, I need only finish up three more regiments in the 9th Brigade to finish the 3rd Canadian Division!

As with all the units in the 7th Brigade, these figures representing the PPCLI in my collection are manufactured by Great War Miniatures 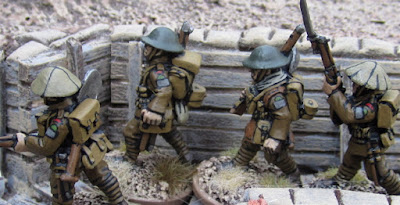 Detail of the formation patch.

The formation patch was a grey rectangle for the 3rd Division, surmounted by a green semi-cirle (green for the senior brigade in the division, semi-circle for the second battalion within the brigade). The PPCLI was one of few battalion of the Canadian Expeditionary force that wore a cloth shoulder title to distinguish their unit – the little red arc above the formation patch which would have the white letters “PPCLI” on it.

I’ll probably post a picture of the entire 7th Brigade.

Next I’ll get to work on the three remaining battalions of the 9th Infantry Brigade to finish off the 3rd Division and maybe some of the guns I have...?

I guess I should work on some Germans at some point!
Posted by tim at 3:45 PM