On with the 2nd Division – starting with the 18th Battalion of the 4th Brigade. All of the figures in the 4th Brigade are from 1st Corps. The 1st Corps figures a bit on the chunky side, but I actually don’t mind. I think some of the sculpts are really fun and full of character – and in some poses I haven’t often seen in wargaming miniatures – cocking rifles, reloading and reaching into webbing for ammo, etc.

I realized, while painting these that a few of the figures I initially thought were infantrymen (because they were carrying rifles) are actually officers?! One was from a pack of Officers and NCOs – I figured the two with pistols were officers and the two with rifles were NCOs. Wrong-oh! On closer observation (once I actually started PAINTING the guys) one of the guys I thought was an NCO is actually another officer carrying a rifle. The THIRD officer in this unit actually came in the “Advancing/Charging” pack. I suppose I could have done some converting… but I was in painting mode and couldn’t be bothered at that point. I’ll have to look at the other battalions and maybe carve off the officer-ish details on the same figures in the other battalions. 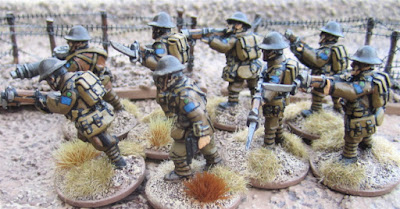 The formation patch for the 18th Battalion was a green square surmounting a red patch – the blue patch was for the 2nd Division, the circle indicated the senior battalion within the brigade and the green was the senior brigade within the division.

I hope to get a couple more cracked out over the long weekend –in between playing a few games - so stay tuned.