I was going to include this in my previous painting update post, but it ended up being so much that I felt it deserved a whole post of its own.

I've been toying with the idea of using the new Warhammer 40,000: Apocalypse rules with my "Epic Scale" 40K stuff. Recently I was looking at what I had and took stock and tried to form them into detachments to see how big of a game (in terms of number of units and power level - the minis are really very small...) I could put on the table and what, if anything I'd need to paint to play reasonable sized battle. I found for both Eldar and Space Marines I had in the neighbourhood of 300-400 Power Level. I may paint up a few more items for both forces before I actually get these on the table... I'm shooting for about 400 Power Level on each side.

To start with... The Eldar

The entire force (so far!). This comes to about 400 Power Level

These were previously organized for Future War Commander - where an element is an element and the number of figures on each stand wasn't really important, so I wasn't really fussed about having the correct number of itty-bitty warriors on each stand. Consequently, a number of these elements have less than the basic number of models that should be on a stand - in these cases I assume that it represents the basic/minimum number that would be in a squad - for example,  you can field Warp Spiders in squads of five or ten, my stands have only three on each of them (because I only had ten of them and I wanted more than just two squads and needed something I could use as a CO/HQ element - so I did three stands of three plus a smaller stand of just one - which would represent the HQ element. 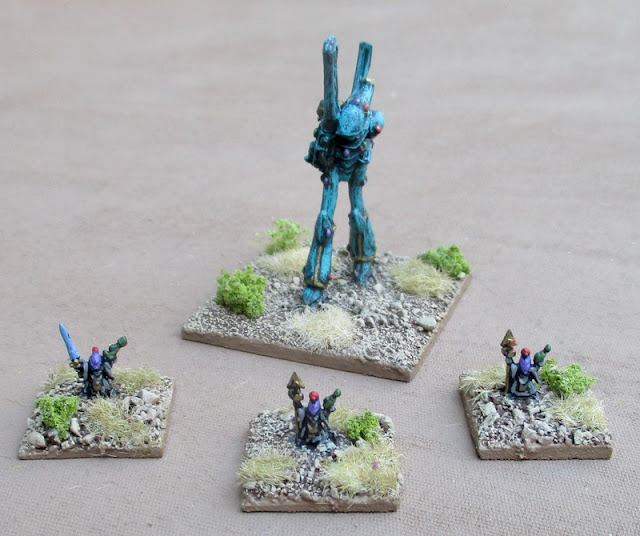 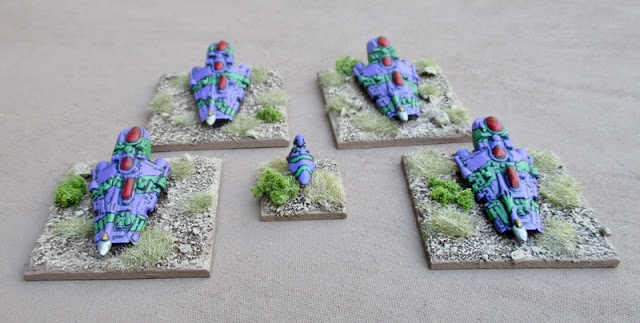 Eventually all these "spearhead" detachements above will be converted to "Battalion" detachments as I finish up some Dire Avenger elements that will be able to ride around in them, making them more of a mechanized assault force than a fast, light tank force. Much like these two Vanguard Detachments below with other Aspect Warriors (Fire Dragons and Striking Scorepions):

I do have one more detachment I could possibly add...

Void Weaver (1) - 9PL
(Not shown, but painted - It's actually just an Eldar Vyper model all painted up in motley)

I'm not sure about using all these Warlock on Skyrunner Jetbikes as Detachment Commanders... but it's what I got. I do have a few other command stands that could be warlocks on foot or Autarchs. They could easily be mounted up in a spare Falcon... I guess we'll see about how well they do roaring around on Jet bikes and how easily they are picked off!

I do have loads more to paint - THREE Phantom titans! Loads more Falcon tanks, piles and piles of Guardian Defenders, Support Weapons, a couple of Revenant Titans (unfortunately later models - that don't really match the ones that I have for regular scale 40k...), more aspect warriors (Swooping Hawks, Howling Banshees, Dire Avengers, etc). I also have one old tempest heavy grab tank - and a second that's missing its turret (if anyone out there HAS a spare Tempest Turret...?)

Haven't costed it all out, but considering the Phantom Titans are all 130+ EACH - I could easily have 1000 Power Level of forces, should they ever all get painted!!!

I also have loads of Marines, and Imperial Guard, and Squats (which, I guess, could be fielded as MORE Guard), a pile of Chaos and Ork stuff as well...

later this weekend there should be a game-a-day update for the third week of September and hopefully some Necromunda game reports!

Also I'll probably do a post about the Epic Space Marines for Apocalypse, at some point in the not-too-distant future...