While I haven't been painting a lot of MINIATURES this year, I have been doing a LOT more drawing and painting - you can see all the stuff I've been working on over at my art blog: Tim's Art Blog.

This month I'm working through some stuff that I thought I'd share here as well, though - a 40 Days of 40K Drawing Challenge! 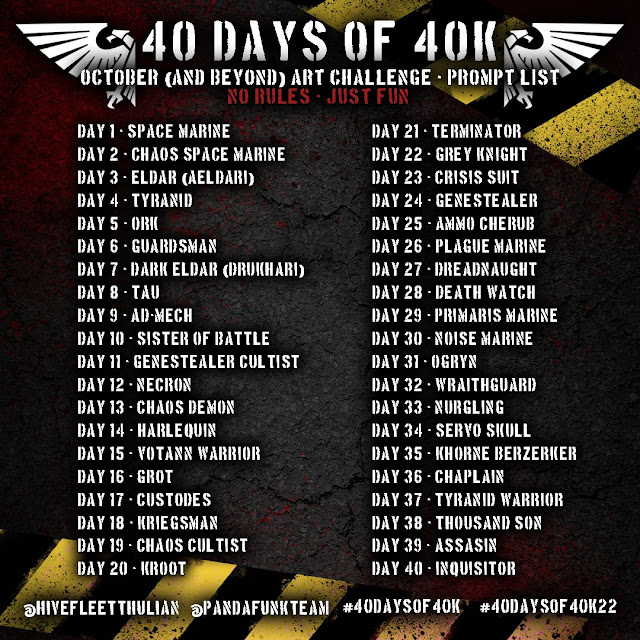 I probably won't post stuff here every day. Perhaps every few days... If you want to see them as they're being done, you'll have to check in on the Art Blog or my Instagram or Twitter or Tumblr accounts! 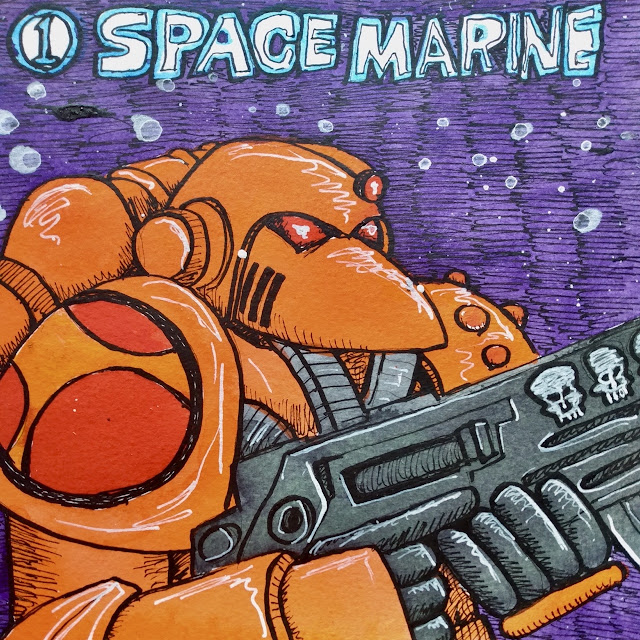 This is a Marine of the Tangermarine Chapter - It's the homebrew chapter I've used for a few of my Marine models. The very first plastic Space Marines models I had from Games Workshop, WAAAAAAAAAY back in 1989...? I painted orange. I still love that colour for Marines. It kind of says; "We know you know where we are and we WANT you to know we know and that we DON'T CARE that you know, because we're just THAT badass... Go ahead and shoot first, we'll be the ones shooting last"

Those first ones I did with a simple stylized jesters head and called them The Emperor's Jesters. I may have worked some purple into their livery as well...? But so many others have called their chapters Emperor's Jesters, I had to come up with something new. So... Tangermarines. It's kind of silly and stupid... But man, I just can't take little space men wargames all that serious. There was a real tongue-in-cheek-ness to so much of the original 40K Rogue Trader stuff that's kind of stuck with me all these years. 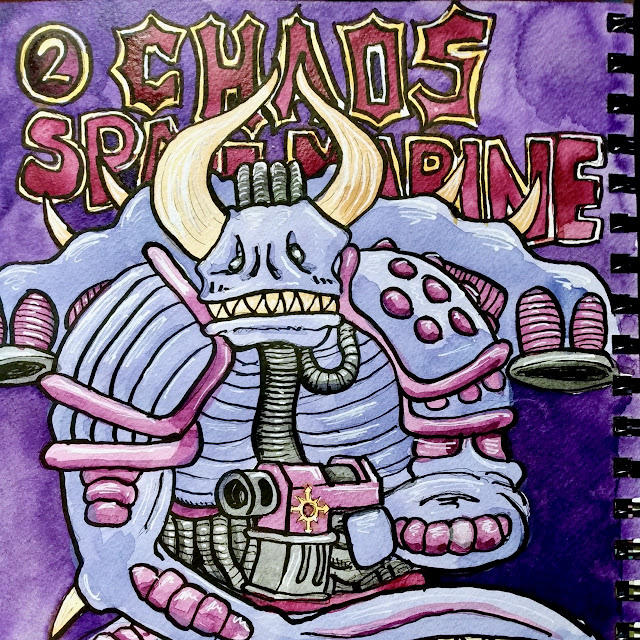 I was kind of going for the older Renegade Space Marine look, but keeping with the purple-ish hues of the Emperor's Children. I had thought of doing a Noise Marine, but that's got it's OWN spot on the list at Day 30! 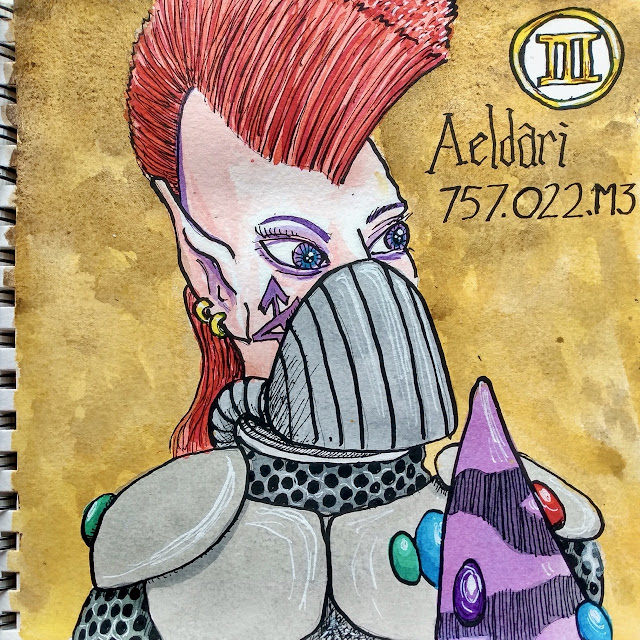 That first box set of plastic Space Marines was my first experience of Games Workshop/Citadel Miniatures WArhammer 40,000. I'm not sure we even had the Rogue Trader BOOK in at the Wizard's Corner in Saskatoon. I think I also picked up a pair of gretchin and squats - that were briefly produced under licence by Rafm, I think...?

As actual metal Citadel 40K miniatures trickled across the ocean and into Saskatoon, Saskatchewan, Canada in the late 80s, it was the Eldar that were my first true love... and my first true force. They were PIRATES back then - much like the recent Corsairs. And the following first of their Shuriken Catapults was BRUTAL.

I probably only had about 20-30 of them, plus a las cannon on a tripod, and a dreadnaught (Wraithlord)... and a handful of Harlequins - that I STILL have! But it was a force to be reckoned with! 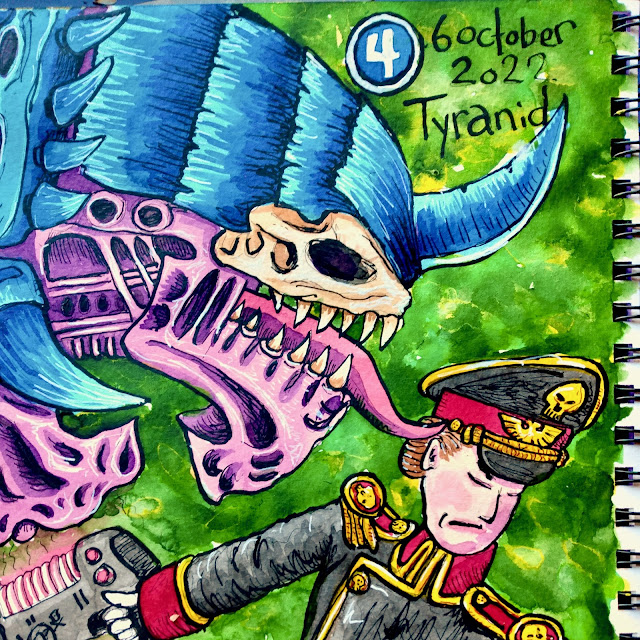 Tyranid Warrior and Genestealer (and Genestealer Cultist) all show up later in the prompt list, so I wanted to stay away from those.... So I chose a Carnifex. Apparently this Carnifex's mom didn't teach baby Carnifex not to play with it's food. Little does that poor Carnifex know, that the tricksy Commissar has already set her plasma pistol to overload and in a few short moments they will both be vapourized in a ball of gas that will flash bright as the sun for the briefest of moments...

The Commissar is not afraid. She is only sad. Sad that in this moment of sacrifice her duty to her beloved Emperor on Terra ends.

The Commissar is serving with the 222nd Guaiacan Commando Regiment on Brynd's World, where the regiment encountered elements of Hive Fleet Haemorrhoid! 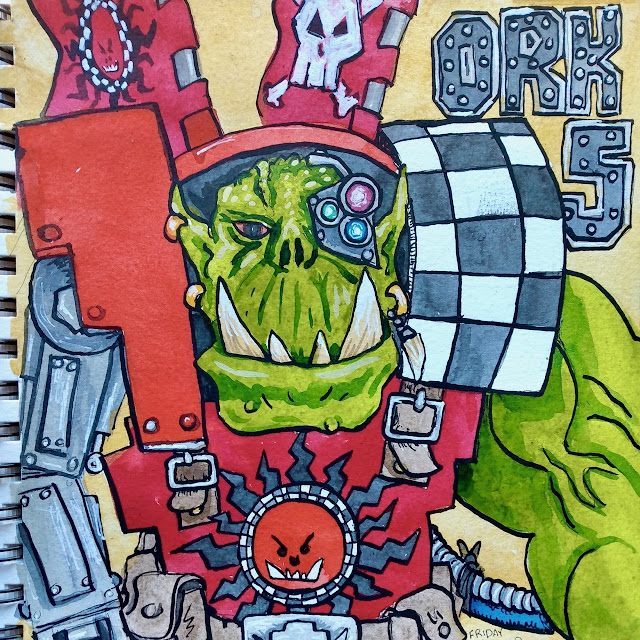 I was imagining this as the REd Sunz Warboss leading troops on Xoxigar Secondus. I'd think up some more fluff for them if I wasn't so damed tired...

Not doing a lot of miniature painting done while working on these, though...