Probably the best thing that came out of RPGaDAY 2022, was I organized THREE different groups to play role-playing games with this fall.

One was the online group I'd been playing with through the pandemic. I basically got them committing to playing a new Wrath & Glory campaign this fall. I'd actually talked to them a few months ago about it and we'd gotten as far as making characters... but then never really ended up playing. This time around I suggested playing ONCE a month - doesn't even have to be the same afternoon or evening... Just fine ONE evening or afternoon each month that EVERYONE can commit to showing up and play a game then!

Another was a group of local 40K players. They also agreed to play Wrath & Glory. That game will also be once a. month.

Both Wrath and Glory games will, effectively be THE SAME CAMPAIGN - both are starting as a Tallarn Tank Crew on Xoxigar Secondus. One group is in 1st Company, the second group is in 3rd Company.

The third RPG groups started because of the Day 15 question; Who would you like to Gamemaster for you? My friend Jasper chimed in with "Finnegan!" (Jasper runs the after school games club at the high school just down the street where Finnegan played for two years before the pandemic. The first year he played in a campaign run by Jasper. The second year Finnegan started running a D&D game for the club. That group continued online throughout the pandemic and is back playing in person. Another member of group, Beau, also chimed in and said he would be down with that - he had come over with his son to play D&D with Finnegan a few years back.

To this I said, "that can probably be arranged...?" After some discussion and inviting a few others, it was decided that Finnegan would also run a once-a-month game for me and a few friends. We didn't settle on ONE game, though, we through we'd try out a few different one-shot games through the fall and if any went well, maybe we'd continue with a short campaign of the one we liked. 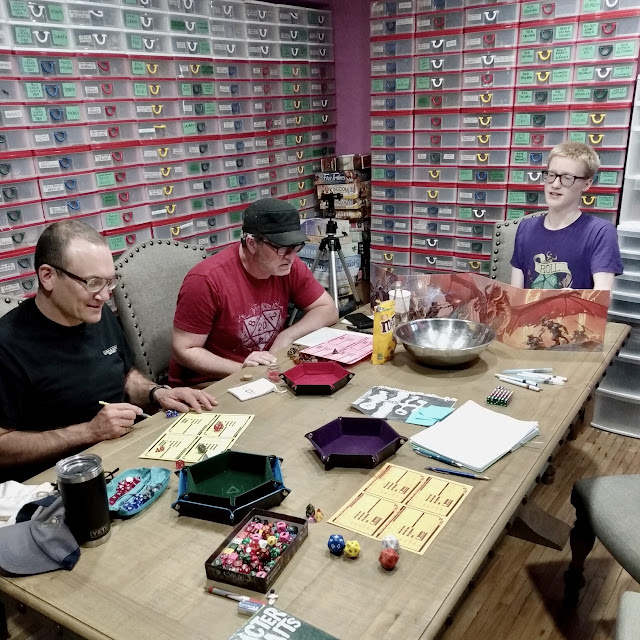 Though Finnegan's been making good use of the Game Room and running in-person The first of the one-shot games Finnegan ran for us - a Mutant Crawl Classics Funnel Adventure. We each made up a team of four, zero-level adventurers that decided to strike out on their won to prove their worth to their community...

Nine of these suffered horrible, violent deaths at the hands of ANT MEN! (Oh, except for B.P. Hovercraft, who died when a rock fell on him... and... maybe someone was killed trying to figure out some new bit of ancient tech we came across...? I can't remember...) The only survivors were Hunter S. Hashpipe, Foxy the Panter, and Madon Jar Murphy - one of each of our characters! So we have our party should we play this again!

The two players Neil and Jasper, I actually met BOTH of them in a Physics class during one of my brief attempts at higher education, 29 years ago this fall! I might have played a role-playing game or two with Jasper back in the day, and in more recent years, since he moved back to Saskatoon and started teaching at the high school, he's been over to play lots of board games (pre-pandemic). Neil never started playing role-playing games until a few years ago. I ran into him while riding my bike one morning in the first year of the pandemic - found he had moved back to Saskatoon and was playing D&D with... Brother-in-law...? and maybe running a game for his son and nieces and nephews and their friends...? So it was great to get together with these two and play games. I am SUPER looking forward to next month - we are planning to try out the Dresden Files RPG (or maybe Dresden Accelerated...?)

I actually got three of the four players out to play and we tried out a short adventure - mostly to try playing out an encounter to remind ourselves of how the system worked and what I'll need to remind myself of and what stats and tables I'll need to print out and have handy in the future. It went pretty well.

The new vehicle rules in Church of Steel worked pretty good. I need to make up some extra rules to quickly determine what happens with all other vehicles in an encounter. I was thinking about using regular 40K or Apocalypse Rules. Or the old Epic rules, if I can find my copy...?

Three of the players got together and made characters, which was fun.

For the Q3 5x5 challenge, I suggested:

But later in August suggested changing to:

The last suggestions for the remaining challenges were:

So far this year, I have played:

Wingspan and Terraforming Mars are done. Two games of Five Tribes shouldn't be too hard.

One game of Direchasm...? What held us up on playing Warhammer Underworlds was me insisting on getting a new warband done each week... and then not getting that painting done... One game of Direchasm won't be a problem... 10 games of Harrowdeep...? I don't know.

Azul and Carcassonne shoudln't be a problem.

Wrath & Glory...? If BOTH groups manage to get in a game each month October, November, and December - I'll totally made that one.

Kill Team... If I got motivaed and got some of those new teams painted by the holidaze, I could probably convince the kids to play a few games when school is over - five would be very doable (for the Q4 5x5 challenge). Ten, though...? I don't know.

What's been going on otherwise...? Well have I have been riding bikes and making art...