Here are a few pictures of my forces for doing battle in the far future... or... not-so-far future...?

To start with I have a few assorted options that I could attach to any of the different Imperial guard units i have: 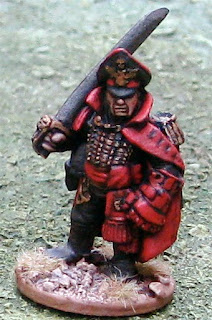 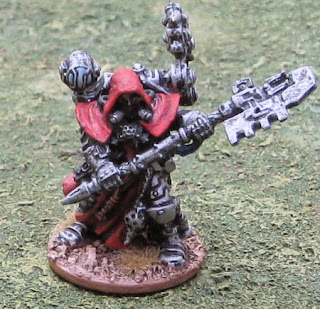 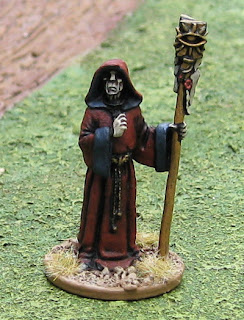 An Astorpath (again, Games Workshop) could be attached to any of the Imperial Guard Company Headquarters. 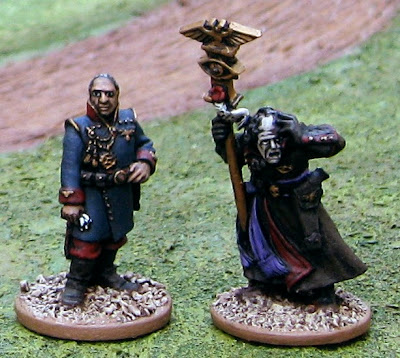 Imperial Naval Officer and a Sanctioned Psyker from Games Workshop. The Naval Officer, like the Astropath above, can be added to any Company Command Team as an "advisor". The Psyker should be part of a team of Psykers that would be an Elite Unit that could be attached to any force - I'd have to paint up a few more first.

These are some monks from Black Tree Design that I tried converting (with some gen-u-ine GW guard bitz) to use as Ministorium Priests of the Ecclesiarchy.

Again... They're Cadian figures... but I'm kind of using them as my own "to-be-named"generic Imperial Guardsmen...

A squad of GW plastic Cadian Infantry I had at one point. I accumulated an entire company's worth of these (three platoons of three squads each). I only ever painted one or two of the squads before I traded them away. 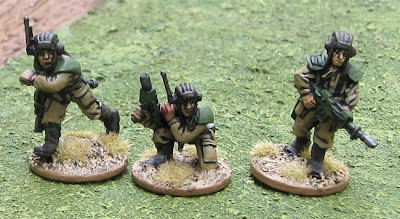 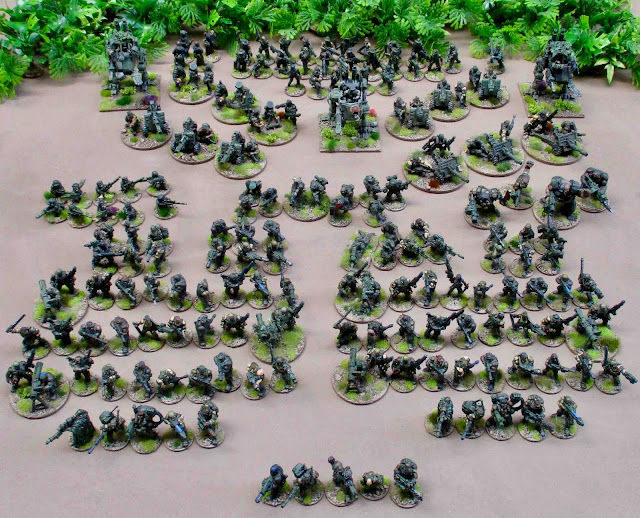 I have a separate Page for my Guaiacan Commandoes (Catachans)  force. You can find it here: 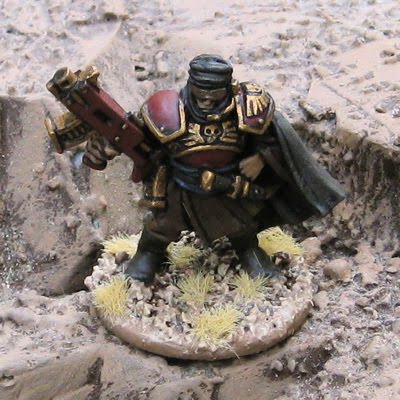 I have a separate Page for my Tallarn force. You can find it here:

I have a smattering of Eldar - some I've had for ages, others I traded for or picked up off ebay more recently... The Girl is starting her own force of Eldar so a few of them have been passed on to her - Mine will mostly be kept around for use as NPC encounters in Rogue Trader or Only War 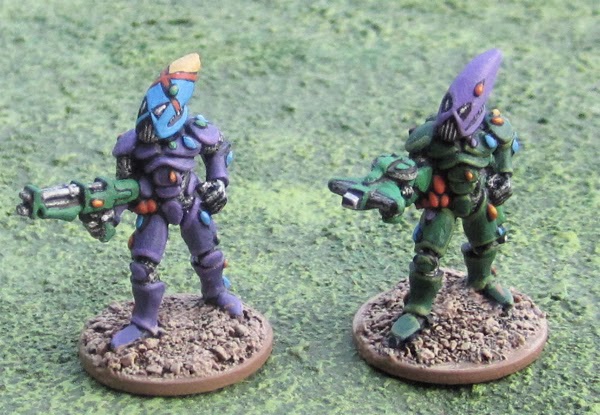 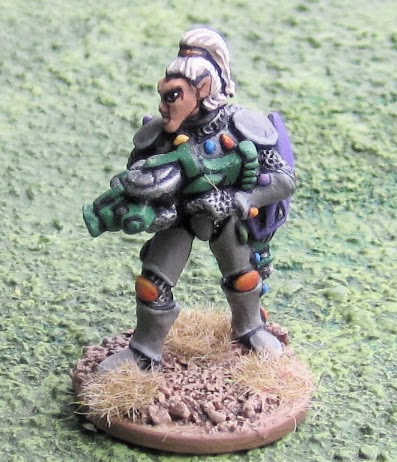 These are some of the oldest figures I have with their original paint jobs (most others from this era - and earlier - I have since stripped and repainted).

I worked it out to a Power Level of 37 and it could be fielded as a "Battle Forged" Vanguard Detachment of about 660 points. If I could track down minis for another two troupes I could field it as a Battalion Detachment for a few more Command Points and a force closer to 900 points... but it is unlikely I'm going to do that any time soon! 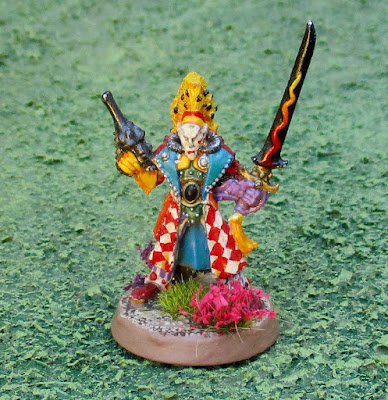 Leading the Troupe is the Troupe Master - armed with a Shuriken Pistol, Power Sword, and Prismatic Grenades. He also has a Flip Belt and a Holo-suit (are are all the Harelquins in this force). Power Level 4 - 64 points - HQ 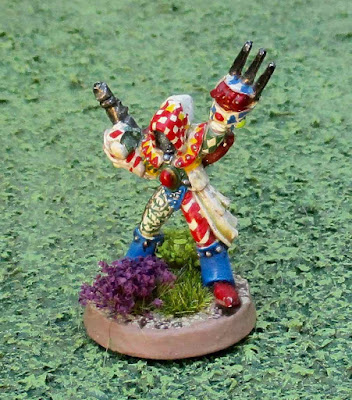 Next is the Shadowseer - a powerful psyker - This fellow is supposed to be armed with a Shrunken Pistol, Halucinogen Grenade Launcher, and a Miststave....? Well... we'll just PRETEND he is! Power Level 7 - 134 Points - HQ 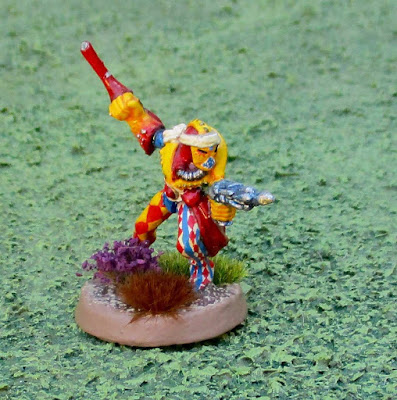 Three Death Jesters provide some heavier firepower for the Troupe. These are three separate Character models that rove around the battlefield laying down pain. They are armed with Shrieker Cannons. Power Level 4 per model (12 total) - 75 points each (225 Total) - Elites

Ideally it might be nice to add another troupe or two to the force and bring it up to a Battalion Detatchment and 1000 points... but that isn't going to happen any time soon. How would I paint them? Try to match this old paint job? Paint them with my currently black undercoat method?

I have a very small force of T'au. Originally they were originally picked up to be used as encounters in Rogue Trader or Only War, but were later expanded so they could also be used as a  Kill Team in Shadow War: Armageddon, and even more recently Kill Team.

The entire force so far... All of the figures here are older metal models from Games Workshop. 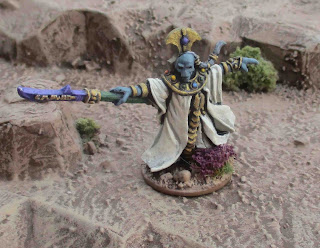 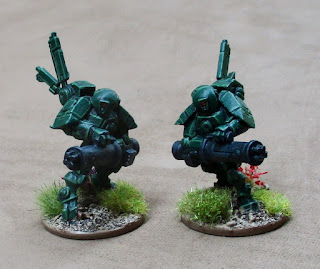 I do have a Tau Devilfish Transport I picked up off eBay to assemble and paint some day - perfect for these guys to fly in on! 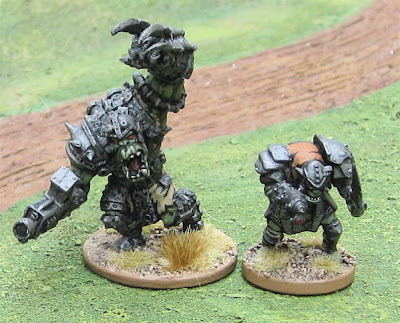 The first two of a horde of  Mantic Games "Marauders" I'd started, but have since traded them to The Boy (who wants to play 40K Space Orks) for some old plastic Space Marines he bought off a friend (who had found them at a garage sale super cheap...). 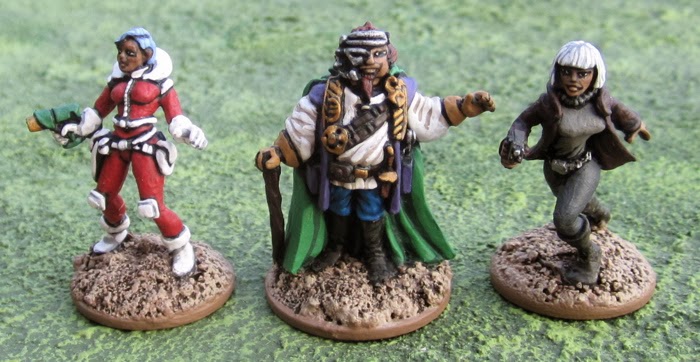 Finally three Cobalt-1 figures from Black Hat Miniatures. I thought the middle fellow looked like he could be a Rogue Trader (or a senior advisor to a rogue Trader) and so picked him up recently along with these two others to potentially use in a game of FFG's Rogue Trader role-playing game 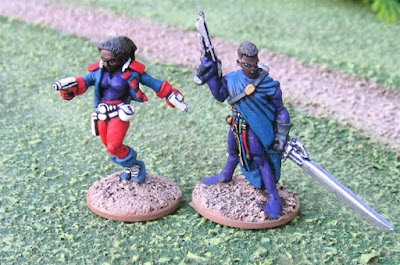 Here are two more of the Cobalt-1 figures I thought I'd use for Rogue Trader.

I also have a pile of other I-kore/Void minis, some old West End Games/Grenadier Star Wars figures, Grenadier Traveller minis, and piles of assorted other Sci-fi stuff that I shall endeavor to get posted up here some time...