Iskendumdrum has a sizeable Egyptian population – traders mostly, but also artisans and others. There is a growing interest in all things Egyptian amongst a certain segment of the Roman population – including their religion… A certain up and coming Roman politician – Trimus Canis Nocturnus – a staunch conservative sees this as an affront to the Roman state religion and a threat traditional Roman family values and the morality of Roman youths… He had campaigned against the setting up of Egyptian temples and allowing Egyptians to practice their religion in Iskedumdrum. He has been especially irked that Roman citizens have been offering up Roman coin as offerings at the Egyptians temples… As his pleas have fallen on the Deaf ears of the Roman governor (himself a Egyptophile), Trimus Canis Nocturnus had decided it is time for action! A group of his cronies staged a daring daylight raid of the temple – making off with a rather large strongbox full of Roman gold – they were unable to get far with it and so hid it in an alley in the Egyptian quarter before fleeing for their lives. By night Trimus Canis Nocturnus returns to the Egyptian quarter to recover the stolen gold, but the treets are not empty – and by no means safe!!

The Romans under Trimus Canis Nocturnus were attacking, the Egyptians were defending.

The Egyptians objective was “Looking for Trouble”. They simple got victory points for taking out their enemies – 1 VP for every 25 points of Roamans killed or fled from the table.

The Romans Objective was “Theft”. The Romans had to locate the stolen goods (three possible location markers were placed within one ling of the Egyptian base line after terrain placement and determining side, but before setting up figures). If they located the goods and carried them off their table edge they would get 5VP. They also got 1 VP for every 50 points of Egyptians killed or fled from the table.

The scenario took place at night – there were only 4 civilians on the table.

The Egyptians – played by The Boy and The Girl 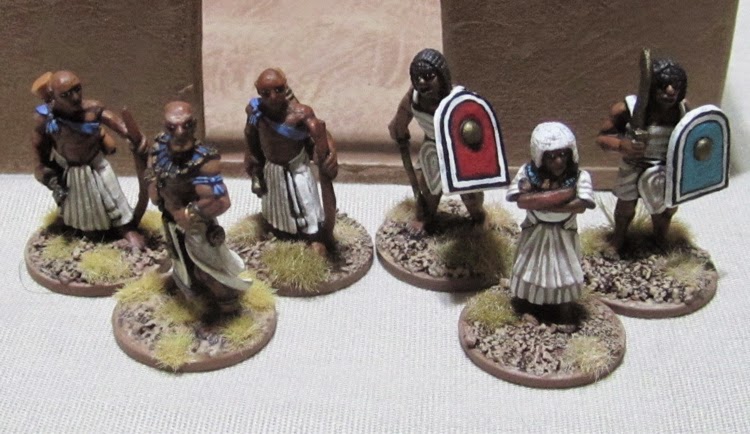 The Romans – played by Amanda 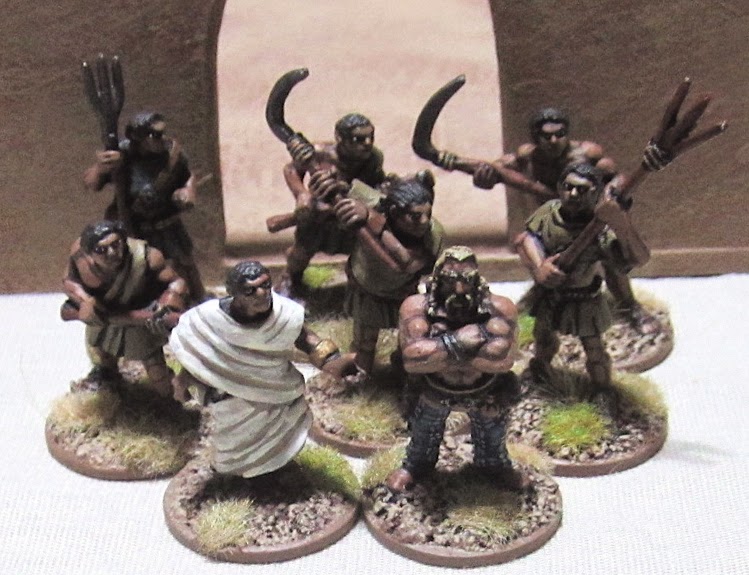 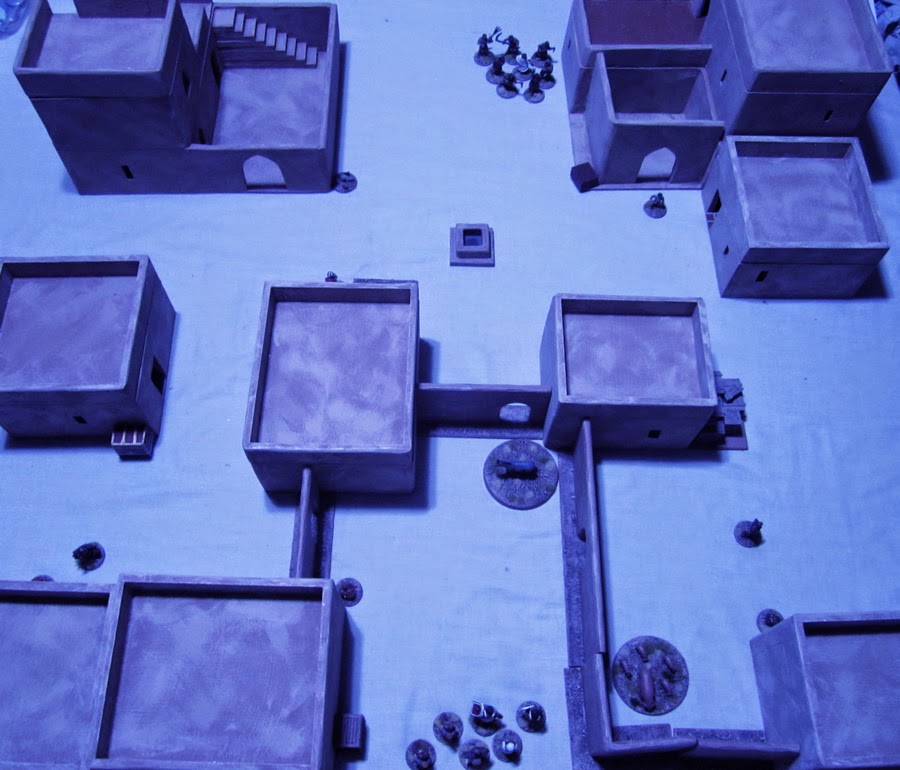 Night falls over the Egyptian Quarter of Iskedumdrum.

All set up and ready to go! Trimus Canis Nocturnus and his up-standing Roman citizen followers are at the top center of the picture. The three objective markers can just barely be made out across from them along the bottom half of the picture. 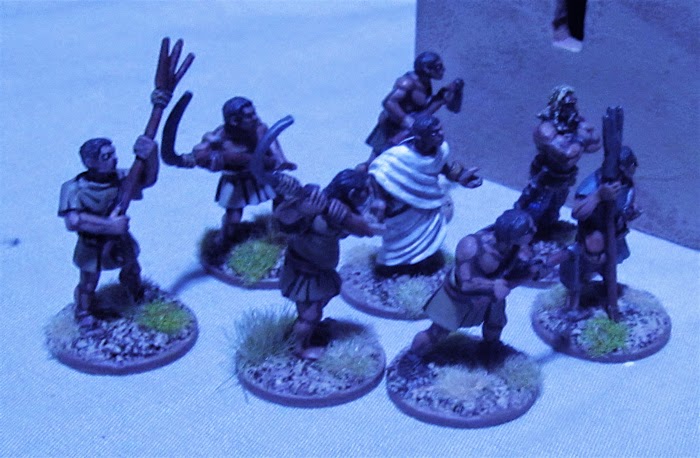 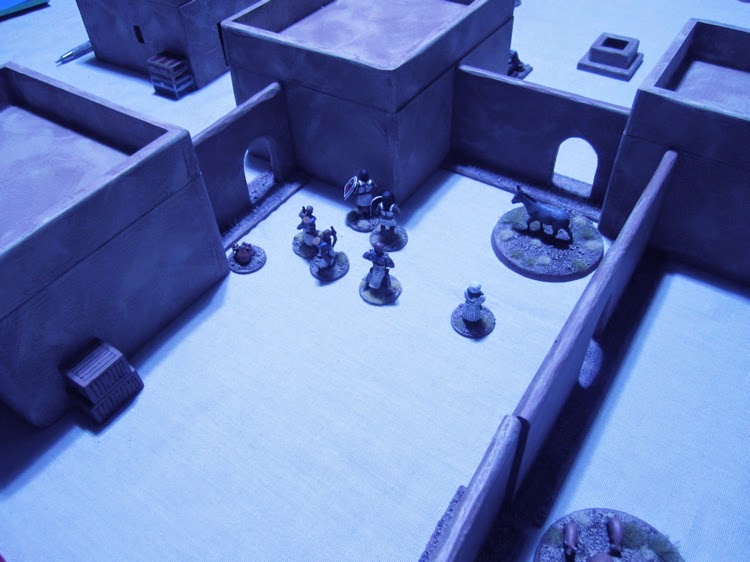 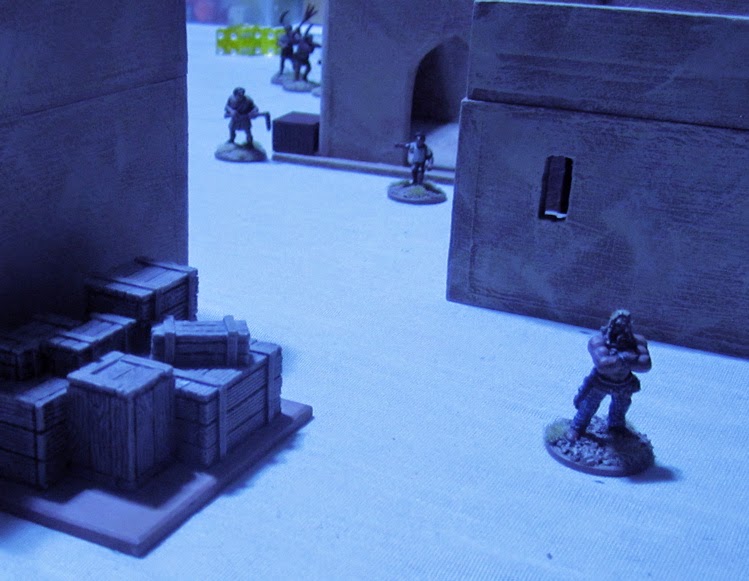 Being a bit drunk, Hottopix – thea heavy Drinking Foreign Bodyguard of Trimus Canis Nocturnus Barged ahead – not realizing his leader had gotten into an argument with one of the others and ended up being left far behind… (Hottopix had gotten three actions and charged ahead, the second guy got two, the third rolled a turn-over…) 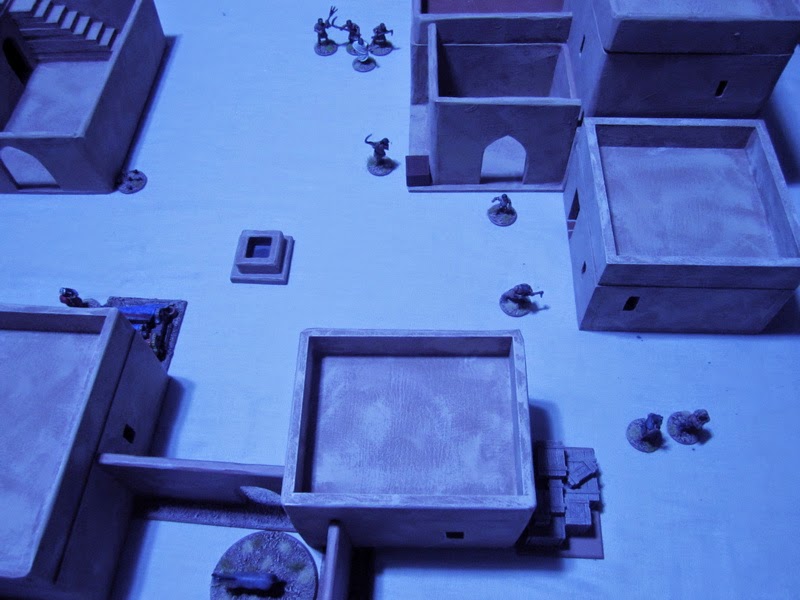 One the Romans second turn a few more henchmen moved ahead – one catching up to Hottopix, who was standing in the street wondering where his master was at. Trimus Canis Nocturnus, however, continued to argue with one of the other henchmen… 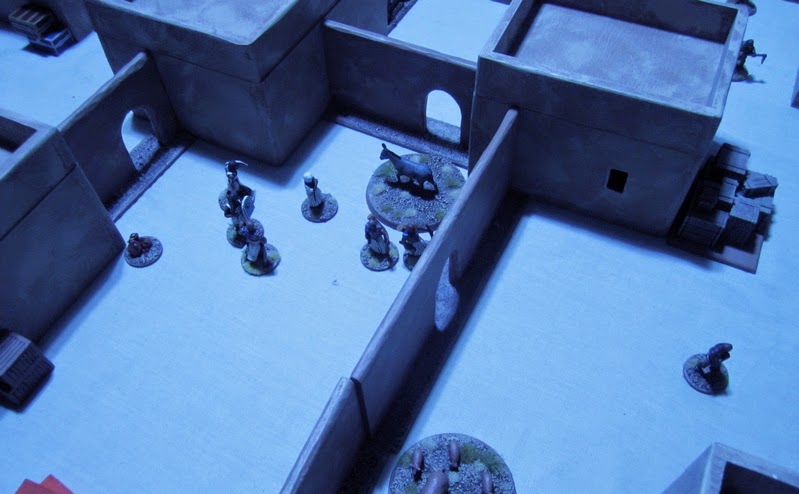 “I think I head someone coming, boss” 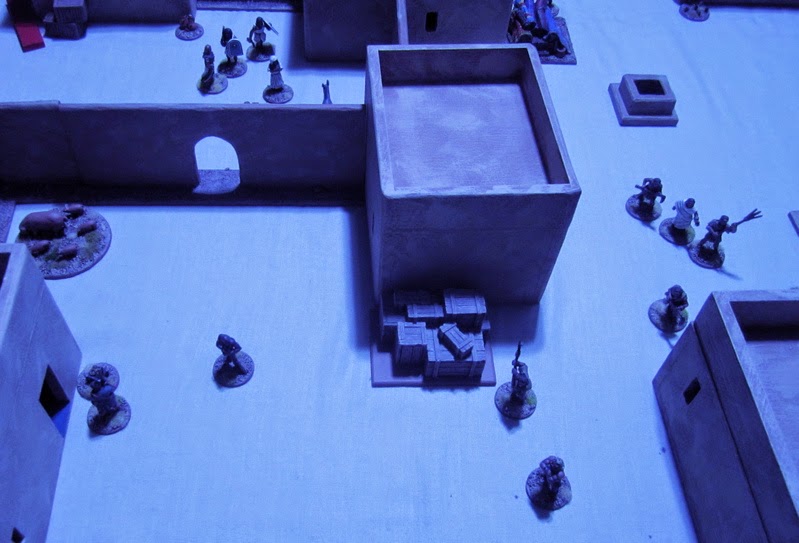 Finally moving forward… one of the Roman Henchmen located the stash! 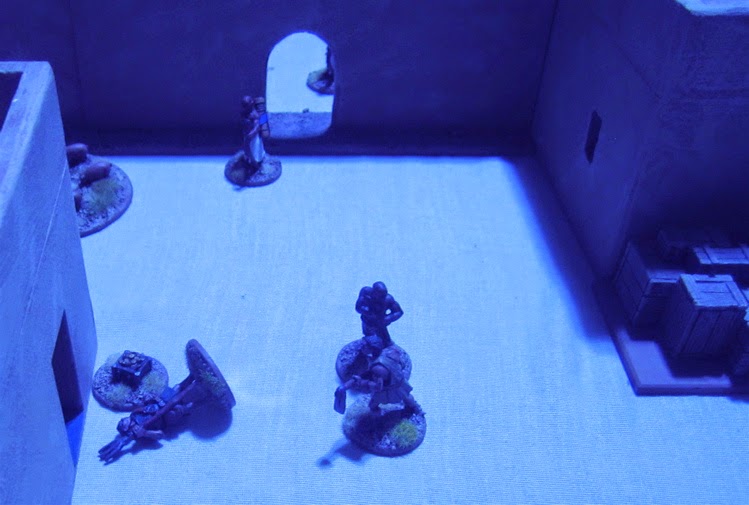 …only to have himself be discovered by the prowling Egyptians… The first of the Priest’s bodyguards through the courtyard knocked him down. This violent action scared away the Nubian slave that was out sweeping the streets at night…? The second of the Priest’s bodyguards out a second arrow in him taking him out! At this point the Nubian slave joined with the Romans – such violence in the streets at night! The Romans were right, these Egyptians ARE a menace! 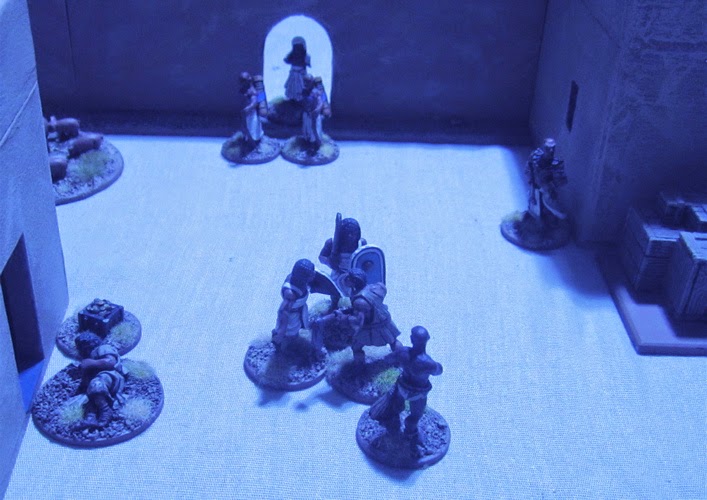 The Armed Egyptian Henchmen were the next out of the courtyard and charged into contact with the next Roman henchman… but didn’t have enough actions to attack. 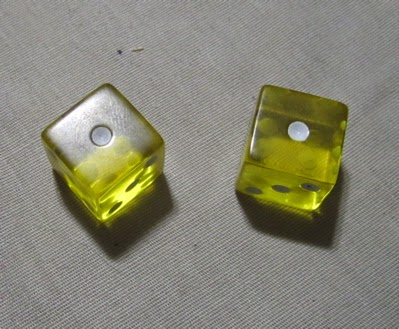 Amanda’s first activation attempt on her next turn…

This is going downhill fast… 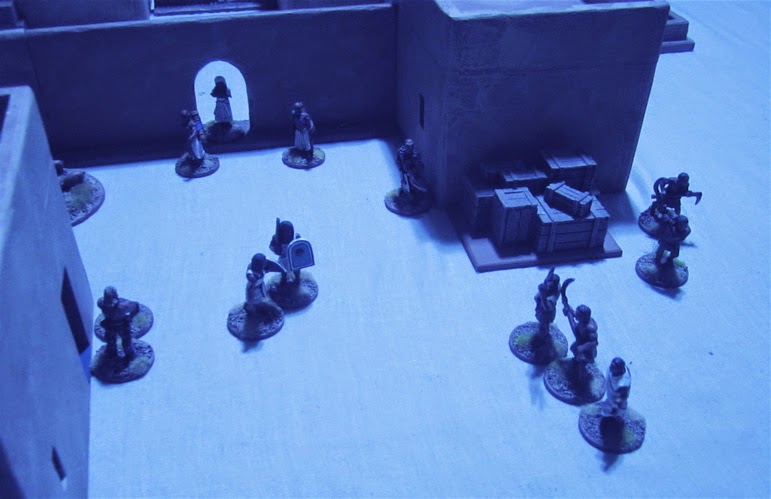 The Romans finally made it to the scene… mostly… and Hottopix rushed forward to grab the stash! 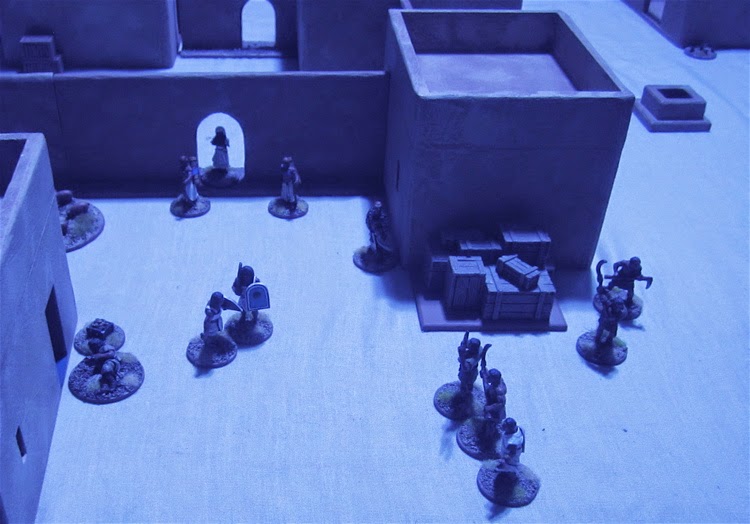 But Hottopix simply ended up being the next victim of the merciless Egyptian archer/bodyguards. 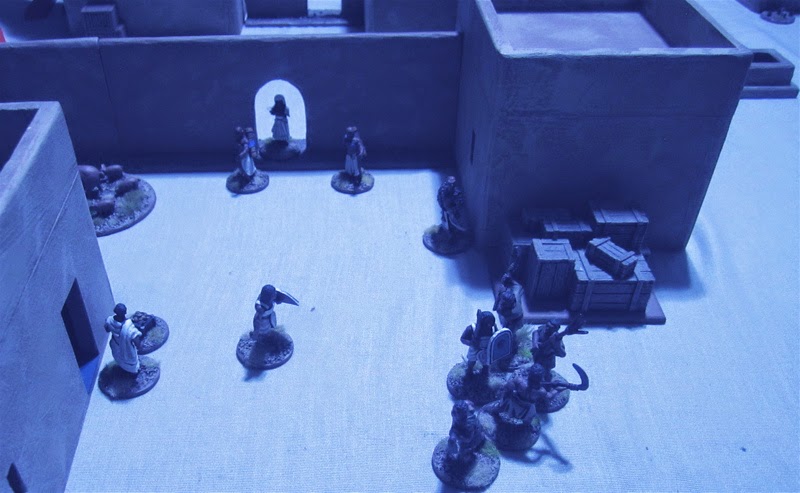 A bunch of the Roman henchmen tried to jump one of the armed Egyptian Henchmen – but none were feeling quite so vigorous to get too close to his massive khopesh! Trimus Canis Nocturnus, not beign one to learn from the follies of others, charged forward to grab the stash himself! 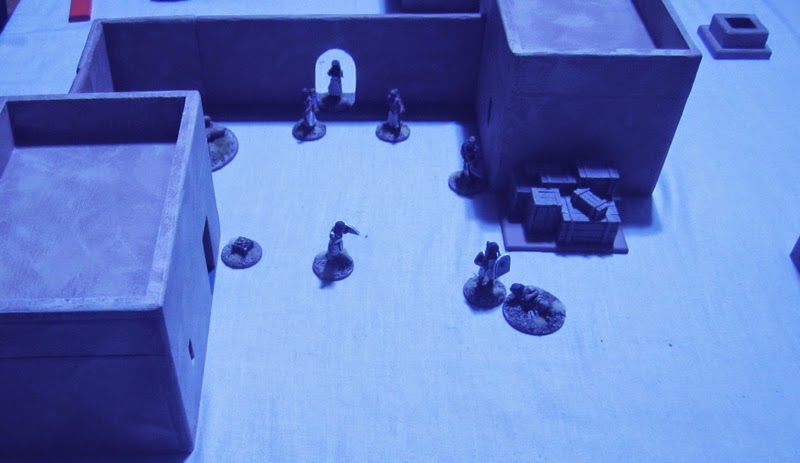 The Romans leader was cut down by the cruel arrows of the Egyptian bodyguards – his cries and the dark blood on his white toga in the moonlight made for a gruesome scene – the remaining Roman henchmen fled the table – well…. TRIED to flee the table – one was cut down with a free hack as he tried to break contact with the Khopesh-wielding Egyptian.

Playing at night is a whole different kettle of fish.

Bows are BRUTAL at night – without the line of sight issues caused by civilians, not to mention the strong possibility that a civilian will join the side of anyone struck by a bow. I am considering adding a few house rules to counter this… limit visibility at night…? negative modifiers to all shooting – or at least remove the +1 to hit for bows…? I’m not sure just yet, but I’m thinking about it…  Or perhaps I just need MORE buildings and line of sight blocking terrain…? I don’t’ want to make it totally impossible to move, though.

As I’ve mentioned one of the things I really like about Song of Shadows and Dust is the objectives – giving the player options about how to play the game and how to try and win. We had a little trouble with plans in this game as the game is supposed to end when either a scenario objective has been met that triggers the end of the game, all of the opponents have either died or left the table – as was the case in this game – or seven people have died. At the beginning of the game Amanda thought perhaps she could try and just grab the stash – if she could find it quickly enough – and scarper off the table without even contacting the Egyptians – if possible. This is the sort of thing I really like… but looking at the “Theft” objective, it didn’t specifically say that removing the item triggered the end of the scenario…? It simply said that removing it from the players own table edge gave them five bonus victory points. Of course anyone that purposely leaves the table gives the enemy one victory point. So, technically, if Amanda had wanted to play this way (and been able to pull it off) she would have gotten five VP for carrying off the stash, but given up 8 VP for all her faction leaving the table!? So I decided that leaving her own table edge with the stash could trigger the end of the  scenario those carrying the object would not give up VP to the enemy.

I also like the idea that the game would end when a certain number of people had died – representing “the critical point on eht table where the violence has attracted too much public attention forcing all faction members to quit the table in fear or arrest or loss of local support.” I REALLY like this rule – one more thing to keep factions from being utterly massacred – something very handy in a campaign! The one thing is the number seven seems rather arbitrary. So I’ve been considering making it slightly random… somehow… perhaps once four have died start rolling d6 after every death if the total of D6+3 is equal to or less than the current Body Count the game ends. On average I think it will still end at about 7, but could conceivable end at 4 or carry on until 9 die. Perhaps we’ll try it in a few of our next games.

My painting table is getting very crowded – it’s hard to tell what may roll off of there next, but it’d very likely to be SOMETHING ANCIENT – Egyptians, Greeks, Romans or Nubians… and there’s always the possibility of more game reports – have to make the most of these last two weeks of summer vacation before all our regular activities start up again!
Posted by tim at 10:38 AM