Wow... a bit late... Had some computer problems the last week or so which were a HUGE headache and I just don't have it in me to get into all that... 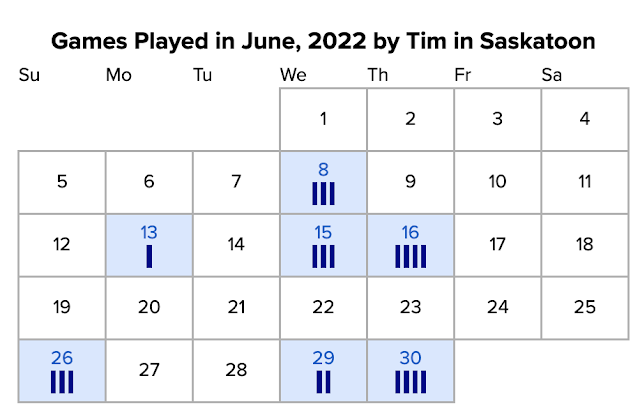 Also didn't really get around to playing much this past month... but I guess it was better than APRIL!? 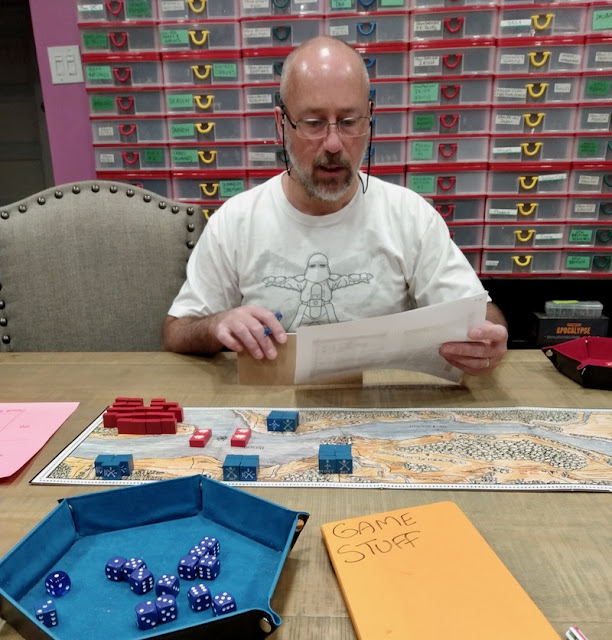 Brent came over again and we had another couple tries at Quebec 1759. I marked up the blank dummy counter/blocks as leaders/detachments and we played using the 2nd edition rules. I think it played way better.

I played the French for the first game 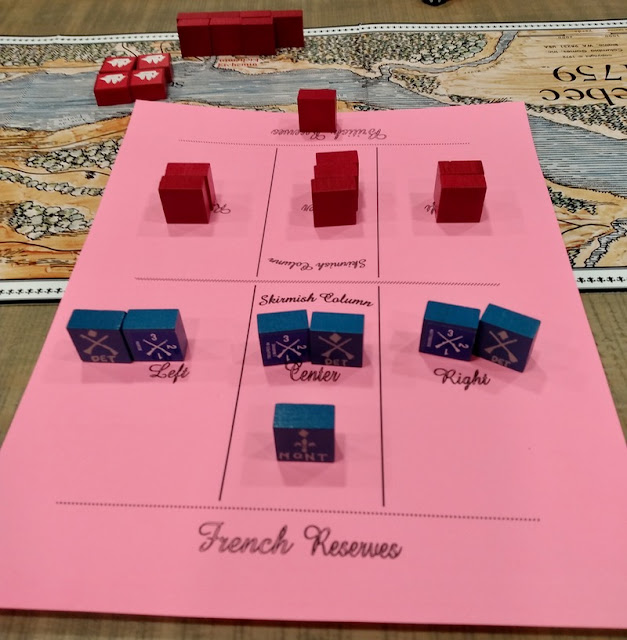 Brent's British seized the Plains of Abraham on the 16th turn (the LAST turn) I only had three regiments along with three of the little detachments and Montcalm. All of the Militia had left. The Quebec militia left because of territory being captured, and Wolfe burning their farms and stuff. the Montreal Militia was gone because the British had captured Cape Rouge for a bit choking off their supplies... All of those opposing blocks were 4CV regiments. 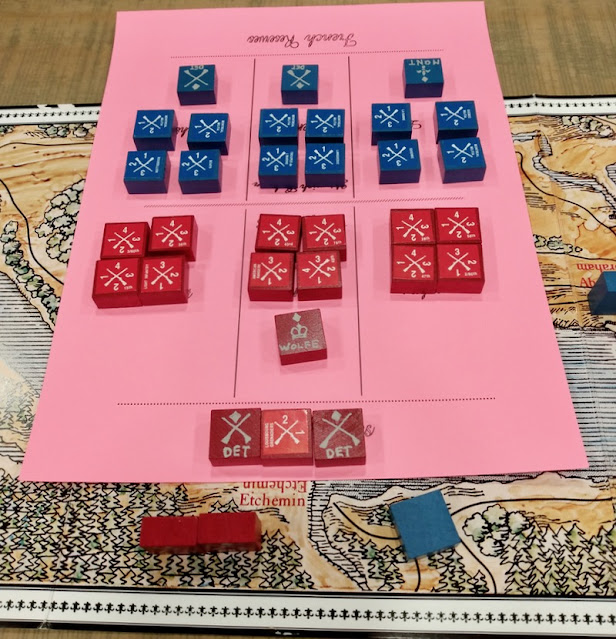 We switched sides and I played the British. I took the North Shore approach. This was our big battle at St. Charles. The French took a good hammering and fled across the river into Quebec. The British followed them there the following turn and a second, smaller battle was fought on the Plains of Abraham and the French, vastly outnumbered were all but utterly destroyed.

That was on turn nine. 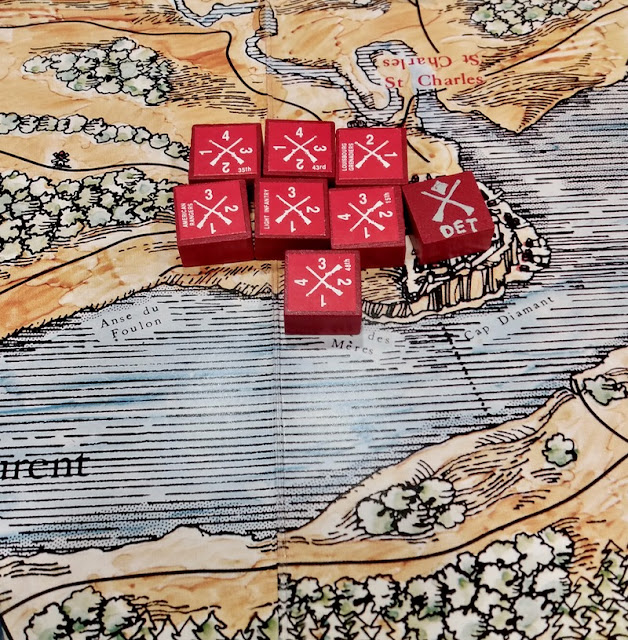 I had to survive 7 turns of harrassing raids and skirmishes from the Ottawa and assorted Militias. Above is all that remained to hold Quebec at the end of the game. I think it actually ended on Turn 15 because I had TOTALLY wiped out all the opposing French - Just 23CV holding down the fort - if it had dropped below 20 I would have lost the game.

both games were very close, but ultimately British victories. I think in the future, if playing the French I need MORE forces at St. Charles and Levis and not worry too much about holding Montmorency or Beachamps. 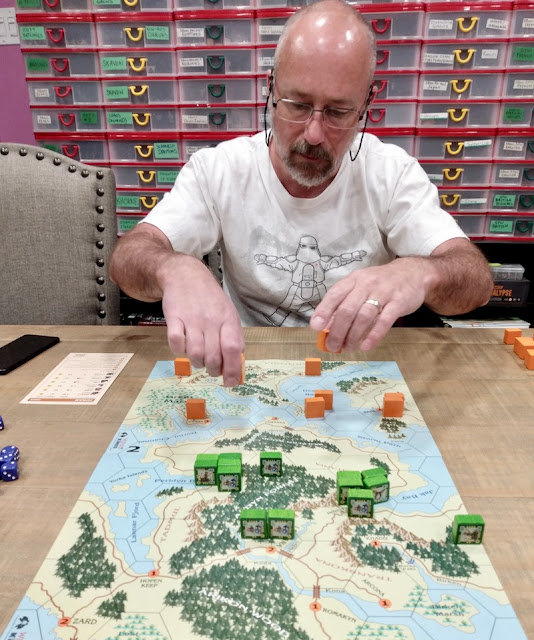 Afterwards we tried out Wizard Kings - also a block game from Columbia Games. There are similarities... but also some considerable differences. 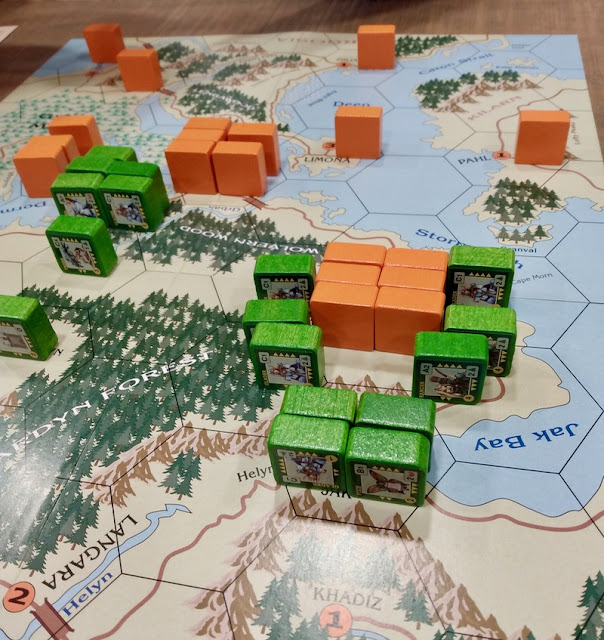 We played about five (out of ten) turns. It was TOUGH - though a lot of the troubles we had may have been because of our map choices and orientation. The picture above was Turn Four where the Orcs and Elves met in a big battle. We both tooks some lumps, but the Orcs ultimately retreated.

On the fifth turn, I sent a task force of two wizards (that can "fly") and some mermaids across the wather and captured a fairly lightly held city and at that point Brent threw in the towel as he figured there was no way he'd be able to recover from those losses?!

It was an interesting game. I might like to try it again. it's too bad I have the original edition. the current edition comes with seven different armies - instead of just two that are in the box I have... I'm not sure I'm going to play it enough to warrant buying the new edition... It would certainly give a lot more options for replayability... All the components (blocks and maps) can be used with either edition. the new edition comes with maps #13-16 (I have maps #1-4)...

I don't know... I guess I should play this a few more times and see if I figure it's something I'd play more... 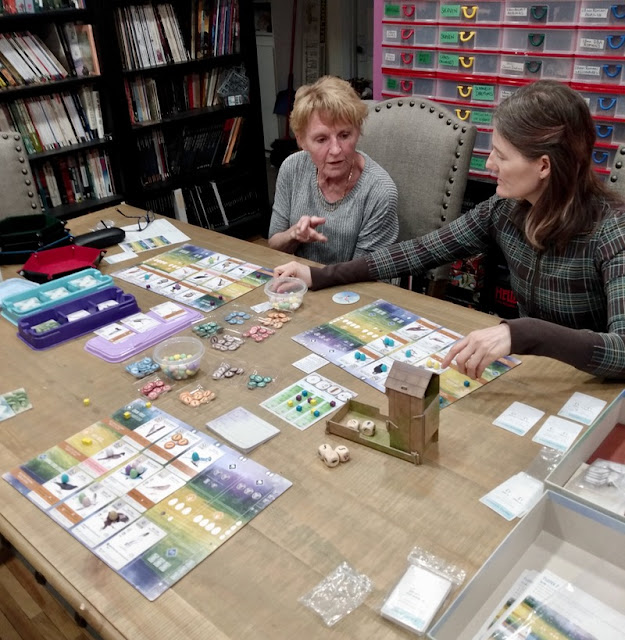 I think Amanda was supposed to go for a walk with her friend Val today, but it ended up raining so Amanda suggested a game of Wingspan instead. 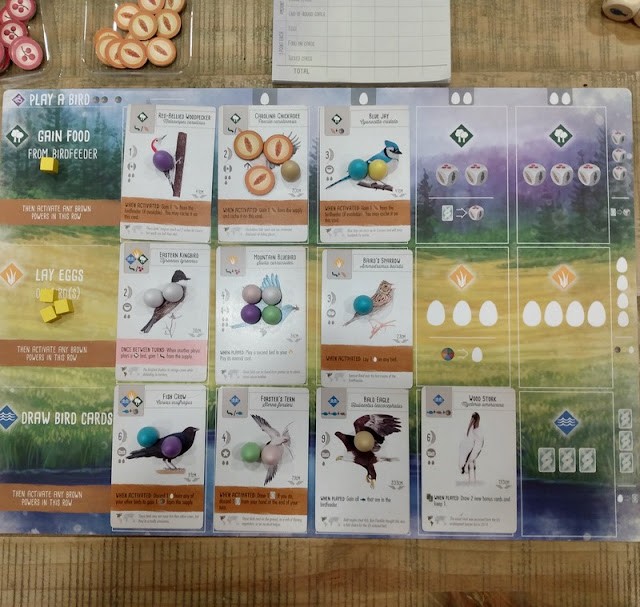 My Birb Sanctuary at the end of it.

While Finnegan was out at work and Keiran at their new dance class, Amanda and I sat down to play a quick game of Warhammer Underworlds 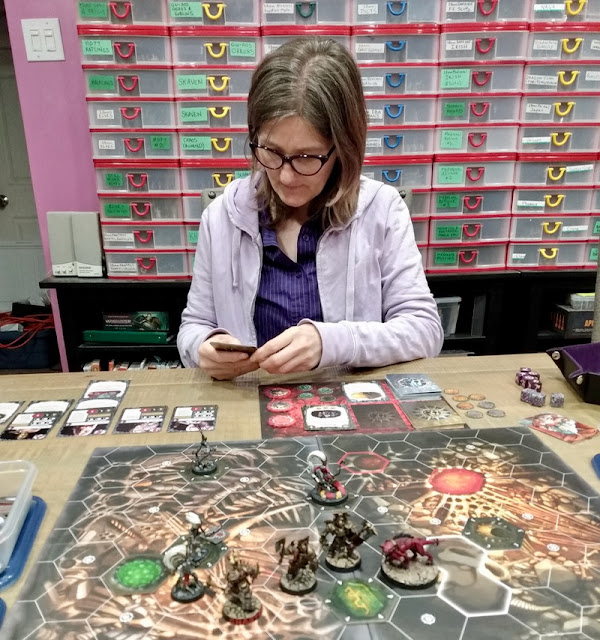 It was nice to get back to playing this. Amanda and I last played in NOVEMBER of last year!? 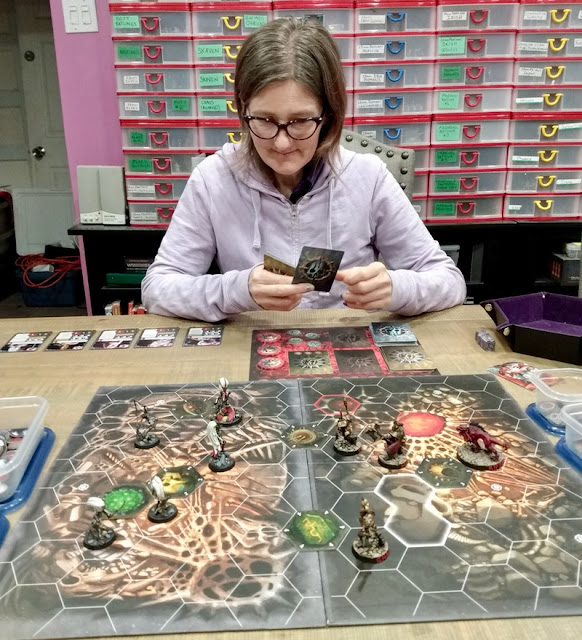 I tried out the relatively recently painted Magore's Fiends 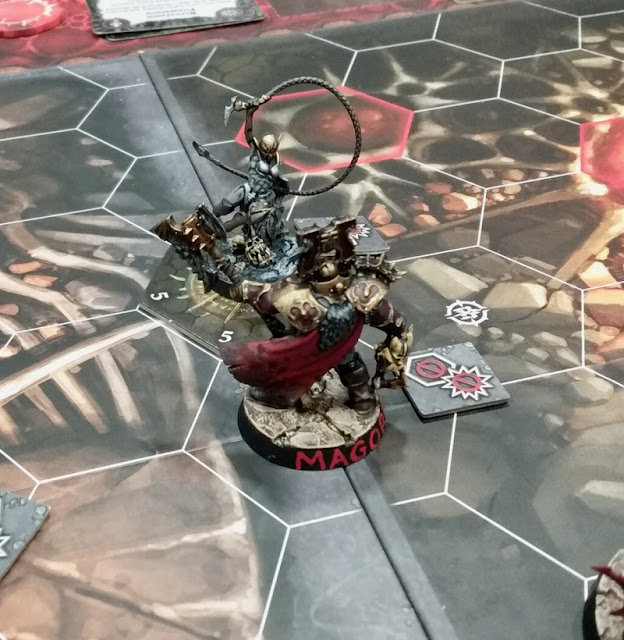 They were pretty nasty. 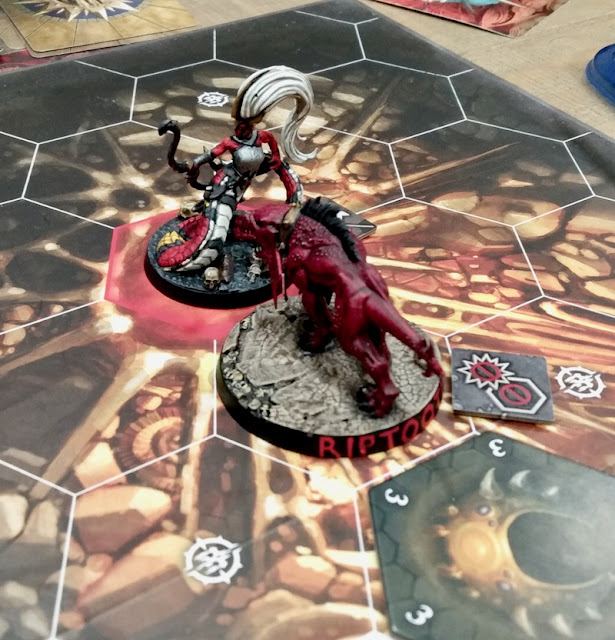 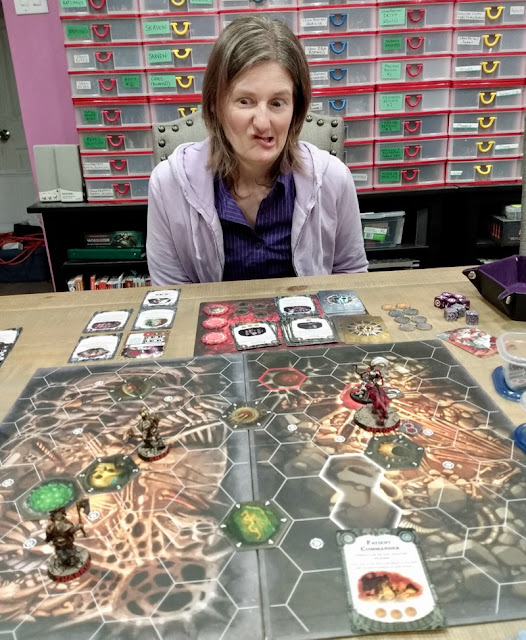 But that was me just using their deck straight out of the box. With some deck editing they could be REALLY NASTY! I think I lost one dude and Amanda had lost four of her team - but did well scoring cards, especially early in the game. 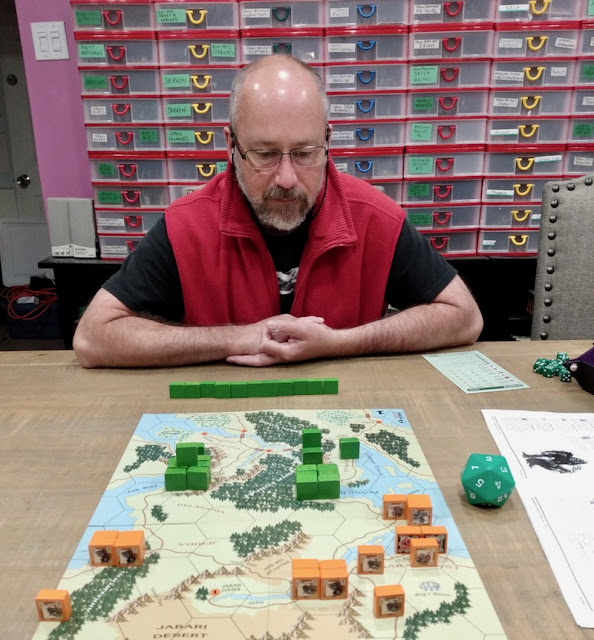 We started off with another game of Wizard Kings.

This time I played the Orcs and we tried to set up a map that woudn't be so plainly advantageous to one side or the other... sort of... The elves still had a massive amount of woods in their lands (as they should, really). 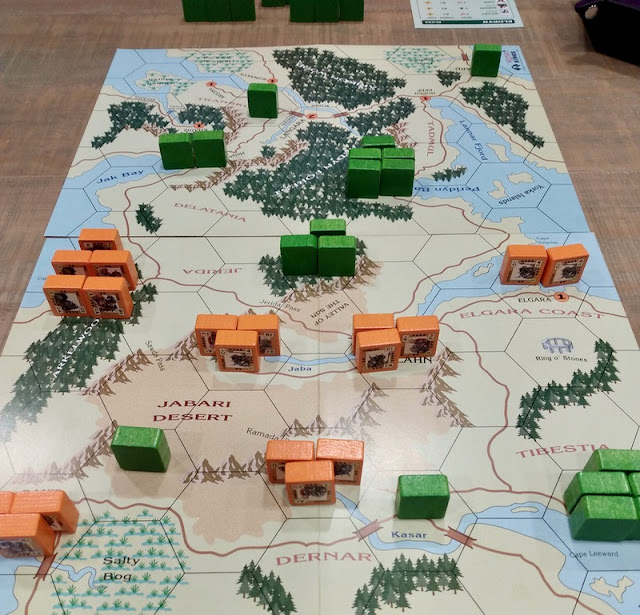 It was a pretty one-sided affair. We didn't even play it to the end of the game, about halfway through it was clear there was no hope for the Orcs...

I had actually been thinking MAYBE I might look for some of the expansions or the new edition - perhaps with more options and maps it could be good. It seems like it has POTENTIAL - and Quebec 1759 was pretty interesting when we finally figured it out. I'm not sure I want to invest that kind of money just to see if maybe it might get good - expecially when I have SO MANY GAMES that i know ARE good, that I just don't seem to find the time to PLAY!? 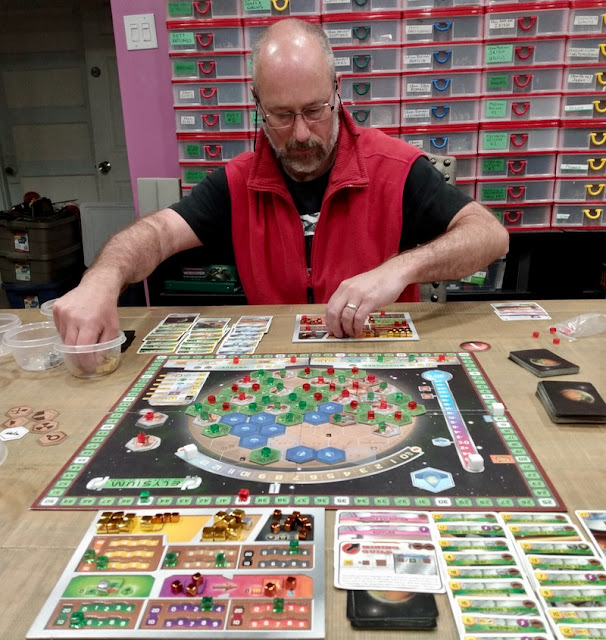 Since the first game went so very quickly, we played a game of Terraforming Mars. 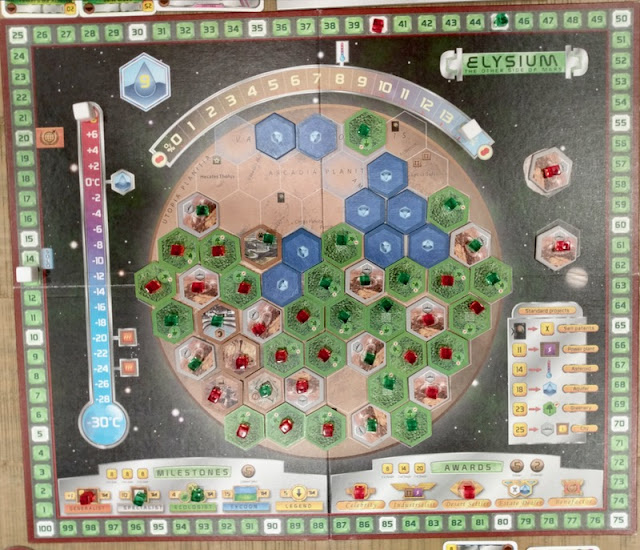 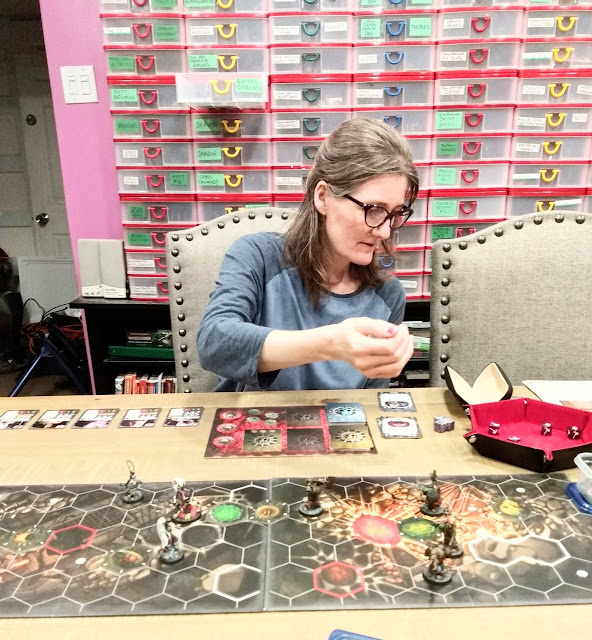 Sunday, Amanda and I were back at Warhammer Underworlds again - hoping to make this a regular thing. We'd actually planned to play TWO games this evening... but ended up running out of time and just played the one. 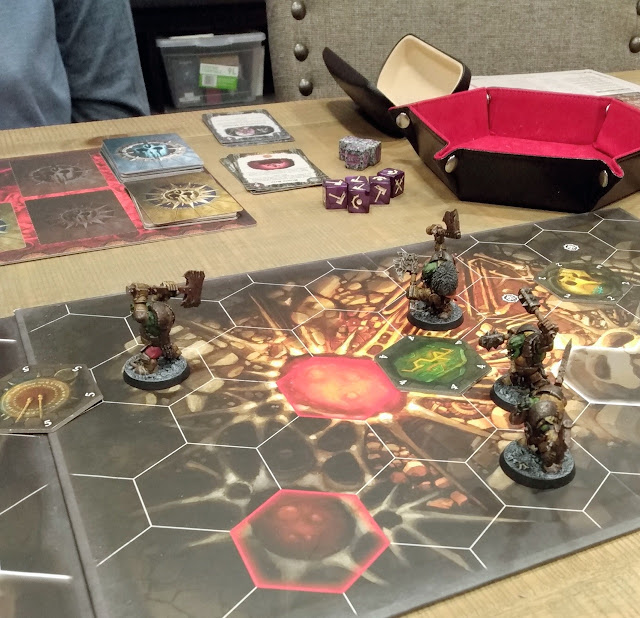 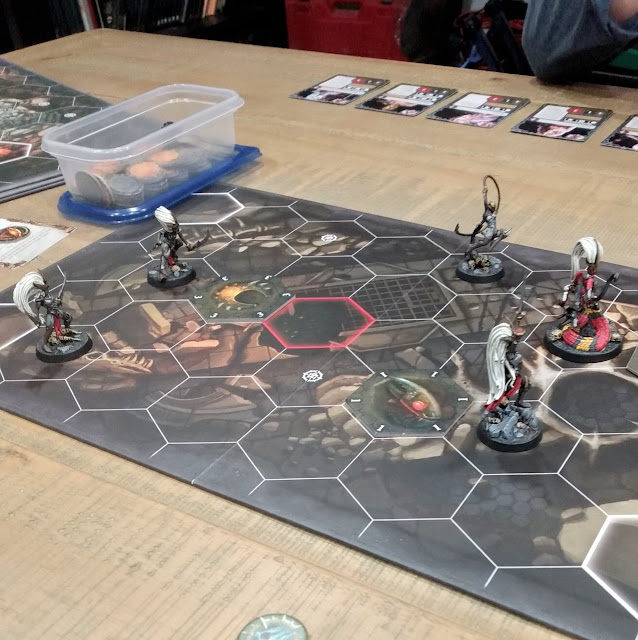 Amanda took one look at the Boyz and decided she was not going to be winning this one... 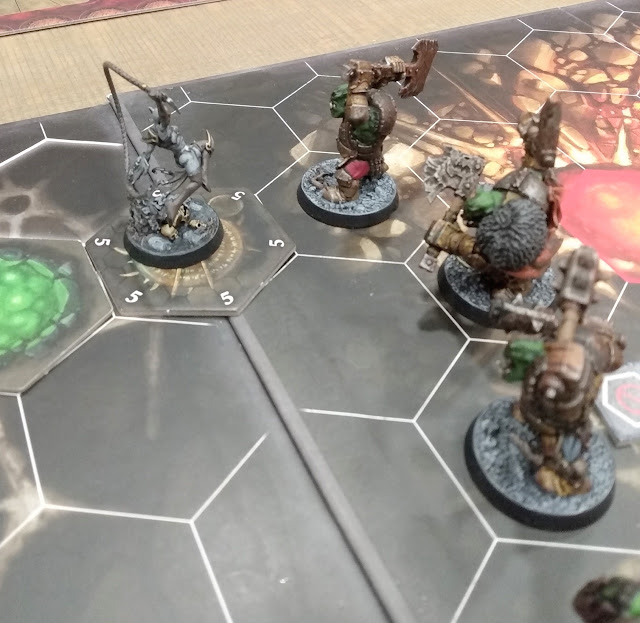 And then the SLAUGHTER began... 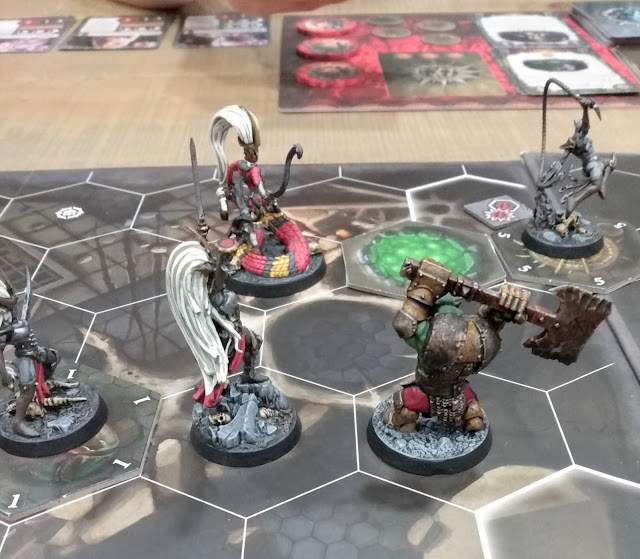 It wasn't the Witch Aelves getting slaughtered, tho...

I did take out a few of the Witch Aelves... but just couldn't score ANY cards. Amanda scored ALL THE CARDS and won SEVENTEEN to five... 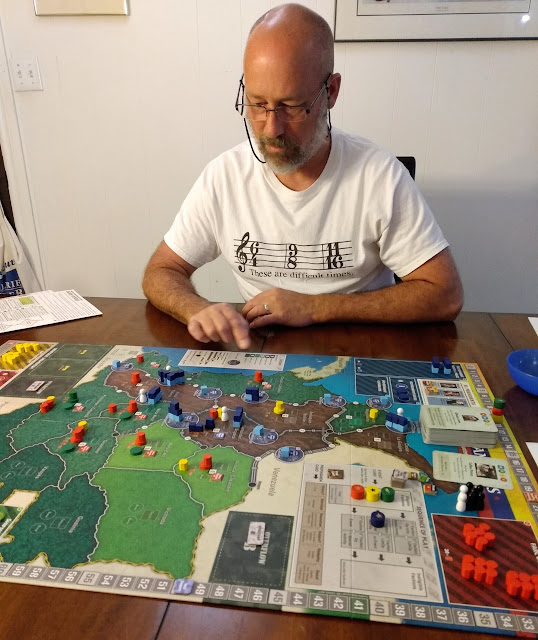 Over to Brent's this time to try out Andean Abyss - one of the GMT COIN games. I LOVE the idea of the COIN games... I just have NO IDEA how to actually PLAY them...

I played FARC and Brent played the Government and the Cartels and AUC were run by bots. 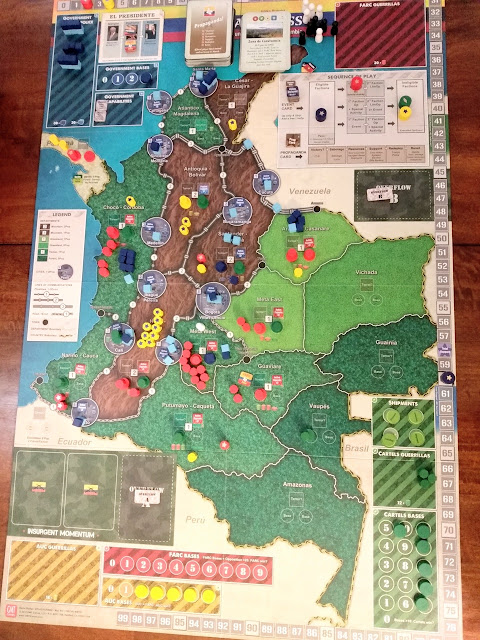 This first game went REALLY QUICKLY - with me getting a couple lucky cards early in the game that put me in a winning position and Brent scrambling to stop me. I really fell bass-ackwards into this win. It was all luck of the card draw - no masterful strategic moved. 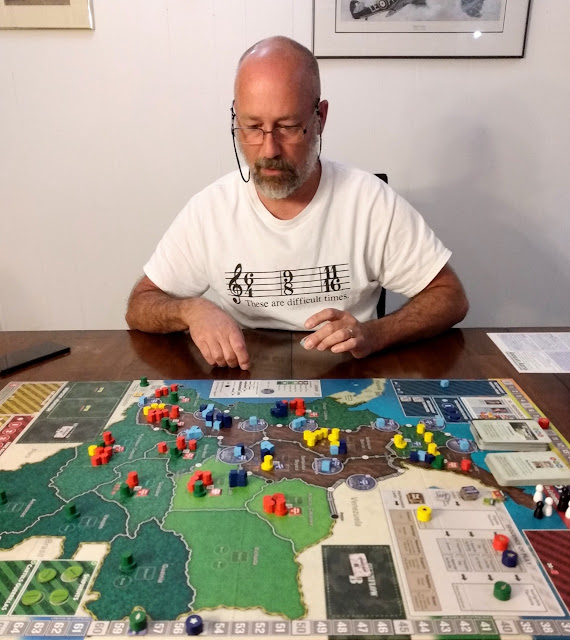 Because Brent only lives a few blocks from where Keiran is now taking nearly three hours of dance classes on Wednesdays through the summer, I thought I'd head back and try blast through a second game!

This one was NOT so quick as the first and we did not get to finish it.. 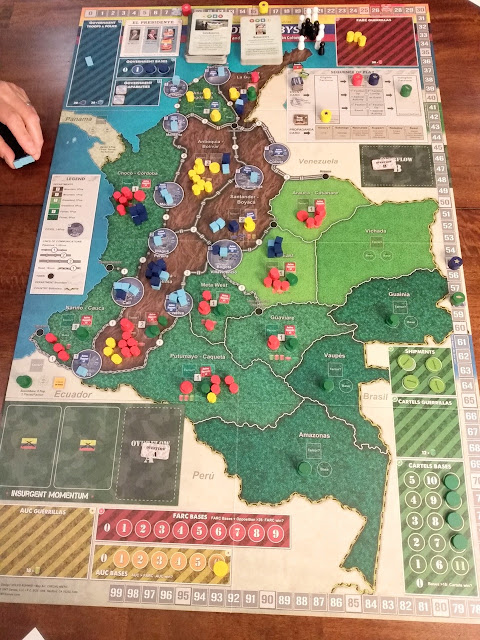 I think this is were things were when we had to stop...?

This time around I was playing FARC and the Cartels and Brent played the Government and the AUC. It was a LOT harder... 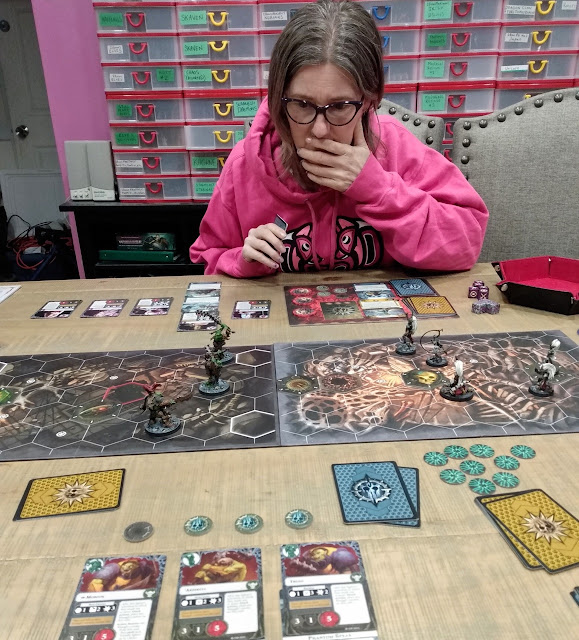 Thursday Amanda and I played one more quick game of Warhammer Underworlds - just so I could have one more game that I got five plays in.

Mrogweath's Blade-Coven faced Morgok's Krushas... And this time it was the Orruks turn to lay the smack down!

We actually played with different decks this time. There is a new format of play - Rivals - where you play with either the deck that comes with your warband (i.e. ONLY cards specific to that warband - no generic cards) OR one of the pre-made Rivals Decks. I have a few of these decks; Illusory Might and Silent Menace. The decks contain 10 Upgrades, 10 Ploys, and 12 Objectives, and are supposed to be playable decks... I actually have TWO of the Illusory Might decks so we each played with the exact same deck... it seemed to work for me a bit better. Or, I was able to figure out how to make the cards work together than Amanda...? I don't know. I don't think she's excited about trying that again any time soon. Maybe I should distribute the cards into binders to use in making custom decks...

And that wraps up 2022Q2... I my 2022 Q2 Plan, I hadn't laid out what might be in the Q2 5x5 Challenge, but guessed it might include Five Tribes, Wingspan and Terraforming Mars... and had HOPED I might get going with Kill Team again...

Here's what we actually got to playing: