Back of Beyond Campaign - Winter 1917

War has come to the East with independent commanders seizing cities and claiming governance under them in the chaos. Once consolidating a base of operations, all struck out to try and keep their foes off balance, despite winter being upon them!

The Bolsheviks were most Coordinated in their attacks, the 1st Babushka Army Corps of Commissar-General L. D. Runstein marched on Engelsk and  1st Guard Regiment, Ipatiev House, under  Kombrig Mahat Mikhan, marched on  Kroptkand.

The Red Horde under Altan Baatar Kahn advanced on the independent city of Bashkent and prepared to invest it.

East Asia Cavalry Division under Hedwig Markus von Eggenberg, Margrave of Grosswardeinm stormed down from Gura, through Stlojia and onward to Bashkent where they found the city under siege by the Red Horde!

The Illustrious Arm of the Nine Illuminated Terrestrial Immortals under Win-Cao Lo-Fat, The Most Illustrious Beacon of Celestial Light and Commander of the Arm of Earthly Might marches to  Ulan-goom then... ALSO to Bashkent!? Who would they find there!? 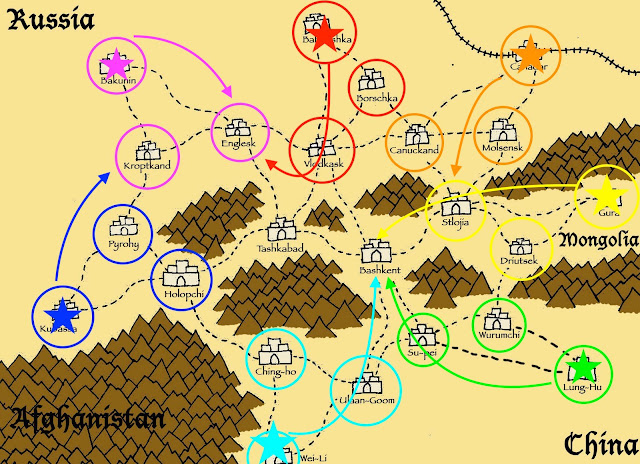 Here is how it all rolled out...

Commissar-General L. D. Runstein was the first to make a move. He marched the 1st Babushka Army Corpsout of Baboushka, through Vlodkask and on to the Tsarist held city of Engelsk. There they found a small garrison making an half hearted effort to prepare the town to defend itself.

Runstien was preparing to envelope the town when the Tsarist Gvardiya Belykh Koroley(Guard of the White King’s), under Baron Yevgeny Lytton, arrived on the scene at Engelsk - almost surprised to find the Bolsheviks already there!? Lines were drawn up and a battle quickly ensued! 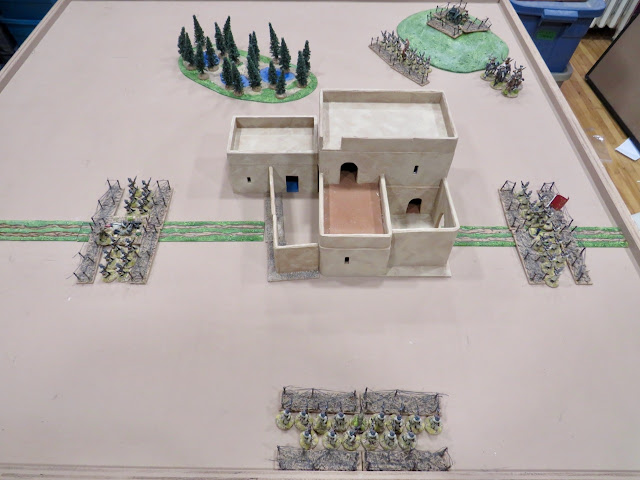 Three of the Bolshevik battalions were entrenched around the town and a fourth was entrenched at the bottom of a hill where the artillery was pounding the town. 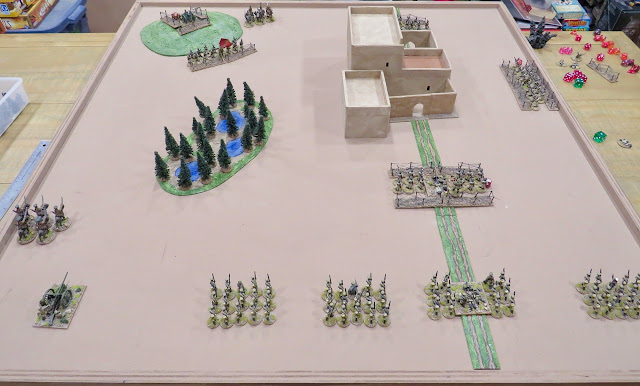 After a brief, but devastating preliminary bombardment, the Tsarists arrayed themselves for battle. On the right, facing the town were the four infantry battalions of the Gvardiya Belykh Koroley. On the left flank were the artillery and cavalry. 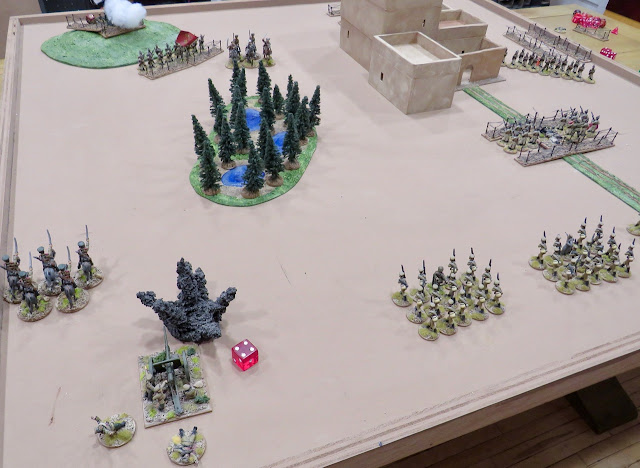 The artillery engaged in a duel for the first half of the battle - hoping to silence each other and then support the infantry battling for the town. Eventually it was the entrenched Bolshevik artillery that were able to silence the Tsartist gunners and were able to turn their guns toward the town. 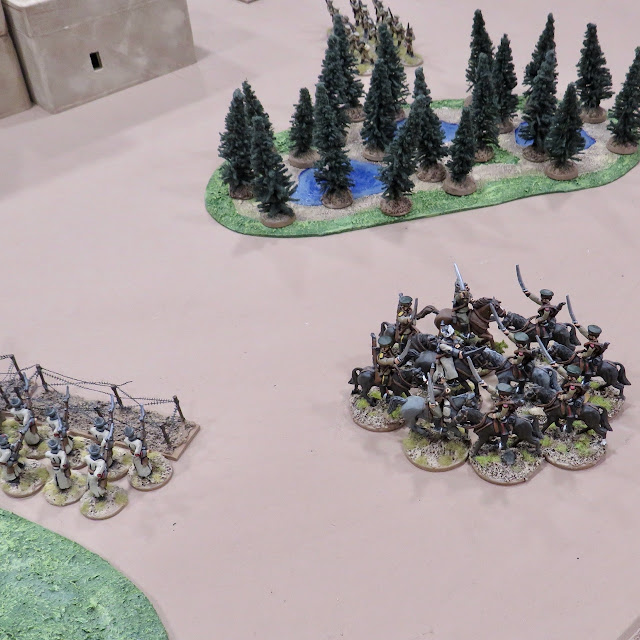 Also on the left flank, the 32nd Cossack Cavalry Regiment attempted to flank the Bolsheviks and attack their guns from behind. But as they advanced, they were met by the Bolshevik cavalry and engaged in a protracted cavalry battle. 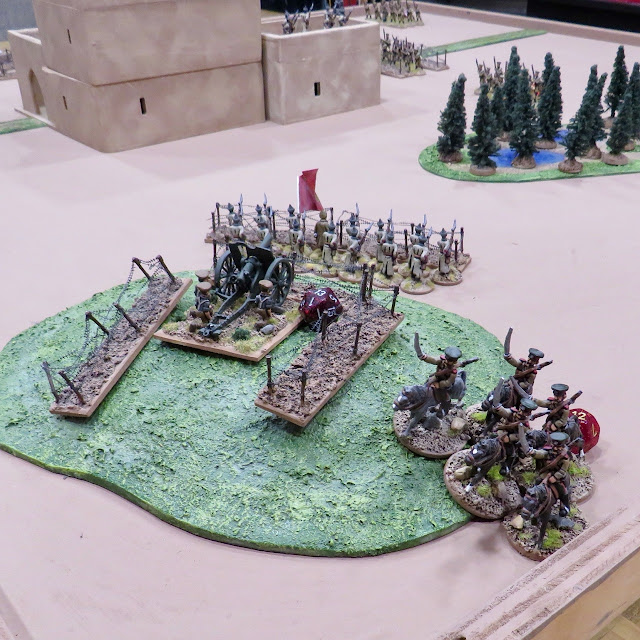 In the end the Bolshevik Cavalry was driven off and the Cossaks galloped out of the way of the Bolshevik infantry dug in before the hill, before taking too many casualties. The were able to get around behind the guns and were preparing to bring fire upon them from there, but by that time, the battle had been decided elsewhere... 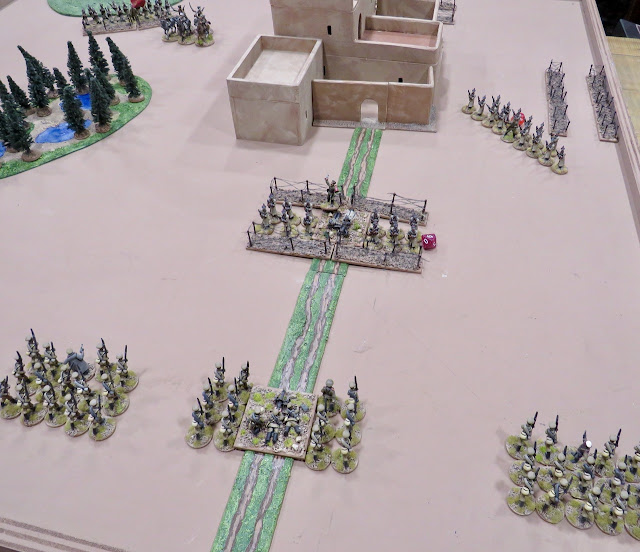 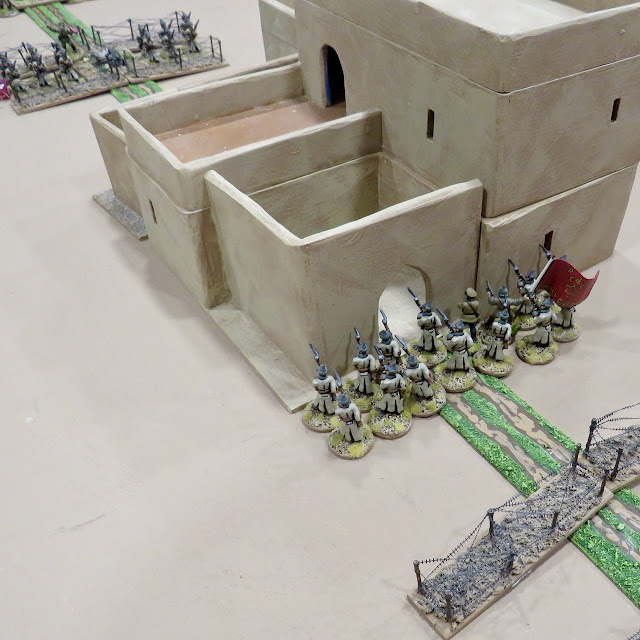 The 3rd battalion, south of the town, also left their trenches and tried to storm the town while the defenders were distracted by the battle on the other side of town. They were ultimately they were able to take the town, but at some cost! 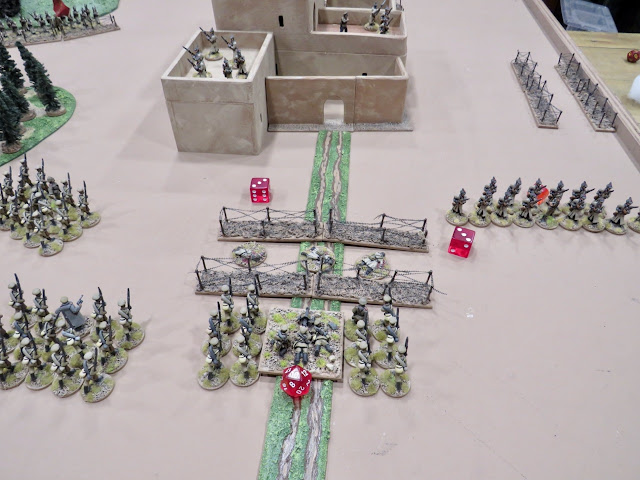 Under the weight of fire from four Tsarist battalions, the Bolsheviks were taken apart in turn. First was the Bolshevik 1st Battalion. 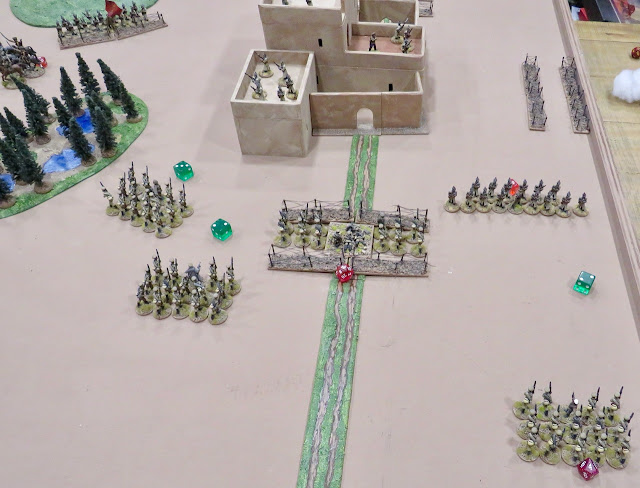 1st Battalion, 437th Infantry Regiment was able to occupy the trenches vacated by the Bolsheviks and bring fire on the town, but the combined fire of the remaining bolshevik battalions and the artillery that was able to shift it's focus to defending the infantry now holding the town, they sustained heavy casualties and were obliged to retire from the battle. 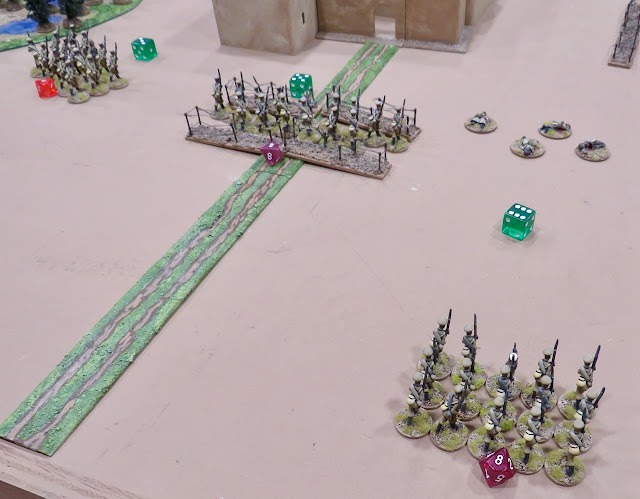 Nest was the Bolshvik 2nd battalion. Stuck out in the open, they were also cut to pieces by the combined efforts of two of the Tsarist battalions.

The three remaining Tsarist battalions were able to cause enough casualties among the 3rd Battalion in Englesk that they were also forced to give up their position and the city was relieved!

Survivors of the Ist Babushka Army Corps retreated back to Vlodkask. A pursuit was initially considered, but with news of a SECOND Bolshevik force laying siege to Krotpkand, further to the west, it was decided it might be prudent to hold Englesk, regroup and prepare to relived the Siege of Kroptkand in the spring.

Kombrig Mahat Mikhan led the Ist Guard Regiment, Ipatiev House, out of Kubassa and marched on Kroptkand. The residents there were unwilling to give in to the Bolsheviks, so a siege dragged on through the rest of the winter.

There were no assaults on the city and, as both sides has limited ammunition, there was little shelling. The Bolsheviks simply surrounded the city and hoped to starve them out. Most of the Bolshevik casualties came from influenza that swept through the ranks of the 3rd Infantry Battalion and 6th Artillery Regiment - luckily, it was mostly contained to the two units.

The Red Horde had barely arrived at Bashket to invest the city when the East Asia Cavalry Division under Hedwig Markus von Eggenberg, Margrave of Grosswardeinm stormed down from Gura to attack from the East! 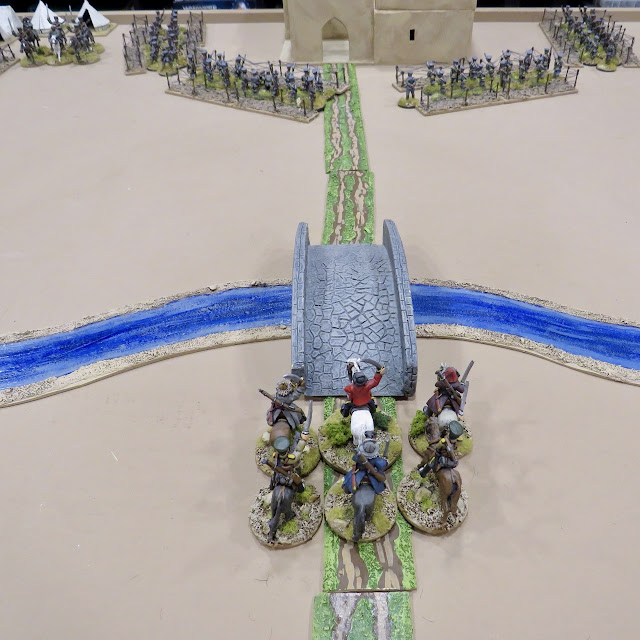 The brash Hedwig Markus von Eggenberg, Margrave of Grosswardein, leading his unit of Mongolian Cavalry, approaches a bridge crossing the White River, east of Bashkent, far ahead of the rest of his column. 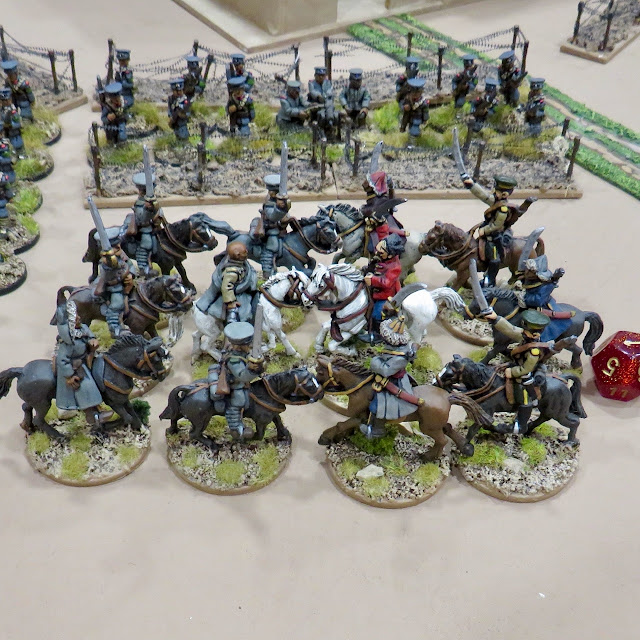 Spying the Chinese Cavalry, led by Altan Baatar Kahn himself, von Eggenberg impetuously charged across the bridge to engage his foe, directly. 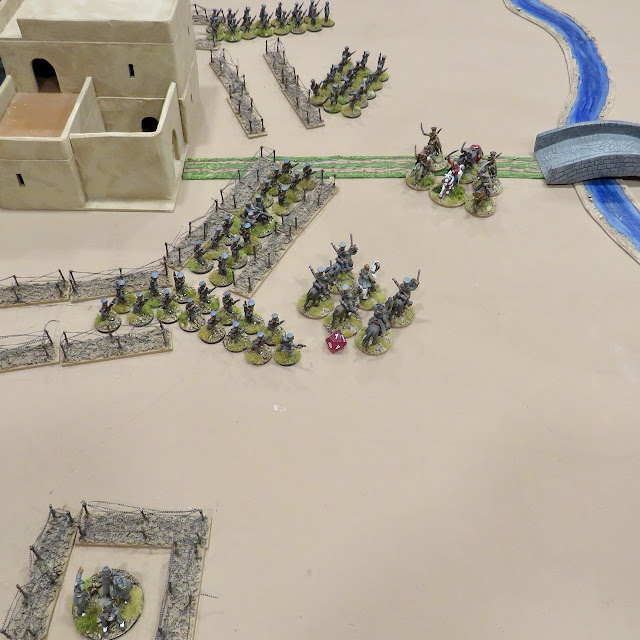 The Khan, being more devious, did not pursue after the Mongoliand and Tsarists wheeled away to prepare for another charge, and instead caught the enemy cavalry in a brutal crossfire and shelled them with artillery. 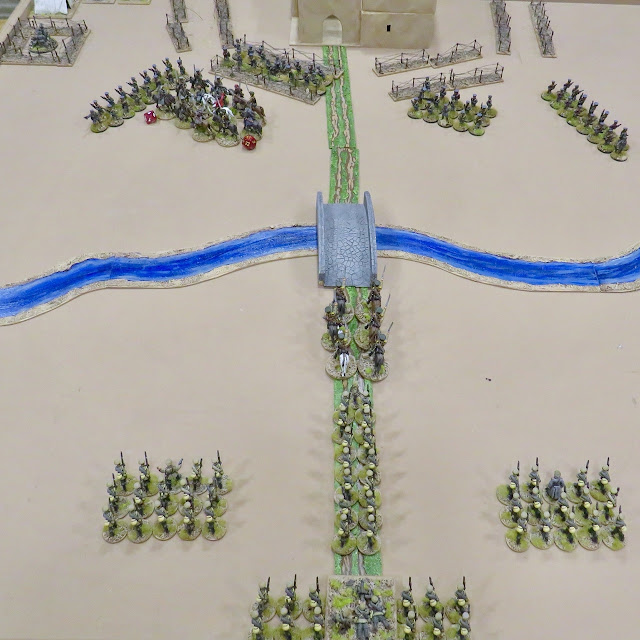 By insane luck, or just incredibly poor marksmanship on the part of the Chinese (or the fact that they were thrown off balance by the insane violence of the Margrave's attack!?), the Tsartist cavalry survived FAR longer than the reasonably should have... giving the rest of the column time to catch up and deploy for battle!? 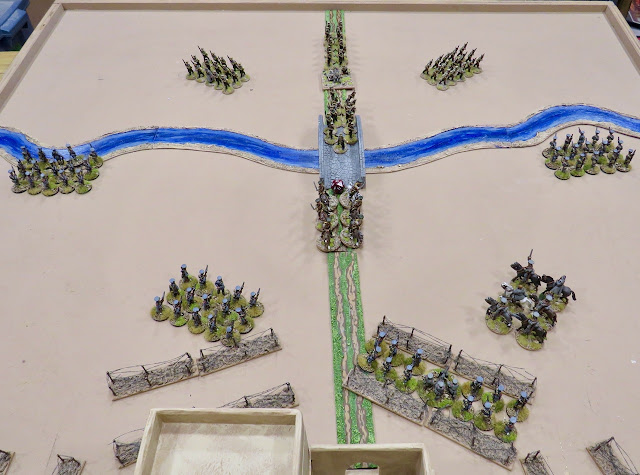 The 38th Hussars Cavalry followed their illustrious leaders example and galloped across the bridge into the mouths of the Chinese guns, to buy time for the infantry to deploy. 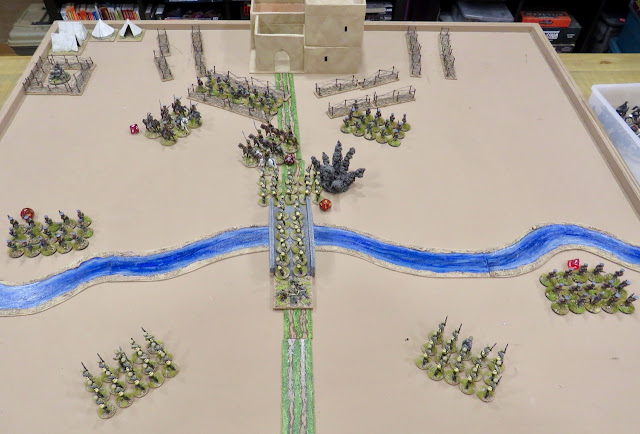 They did not survive nearly as long as the first wave of cavalry, but they did buy precious time for the infantry to deploy. 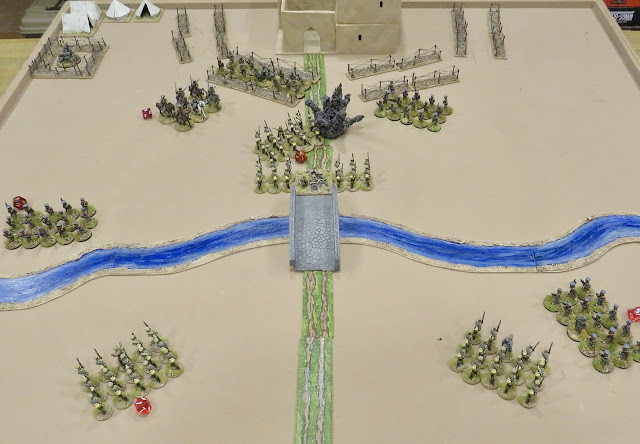 At this point the battle devolved into a protracted firefight. 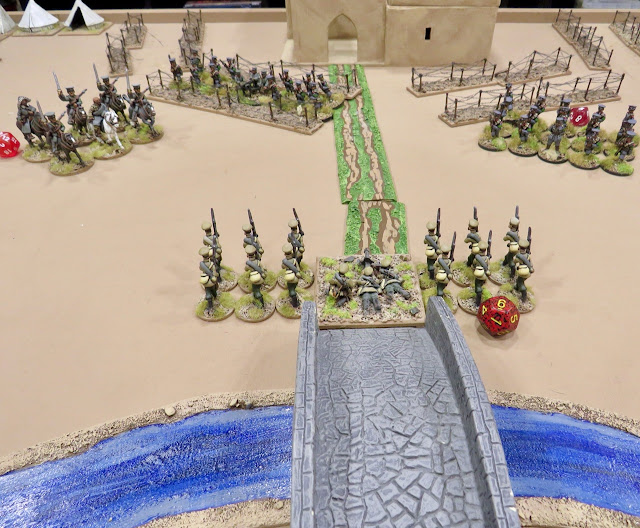 The overwhelming fire of the Chinese infantry (some of whom has remained in their trenches around the town), supported by artillery, was telling on the Tsarist infantry. the 2nd battalion, 337th Infantry Regiment, having crossed the bridge first, took the worst of it. Eventually the 1st battalion was also obliged to flee back across the bridge to the east. 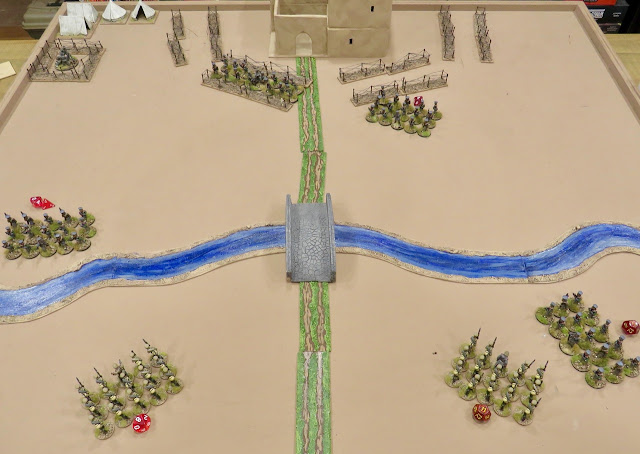 With the Russian infantry on the west bank of the river routed, the Chinese artillery shifted their fire onto the remaining battalions of the  369th Infantry Regiment on teh far side of the river. Already under fire from Chinese infantry and already suffering heavy casualties, there was no hope in recovering this battle and the remaining Russian infantry fled to the east with the rest of the Division.

The survivors and stragglers of the East Asia Cavalry Division staggered back east towards Stlojia along the White River valley... but their ordeal was not yet over!? 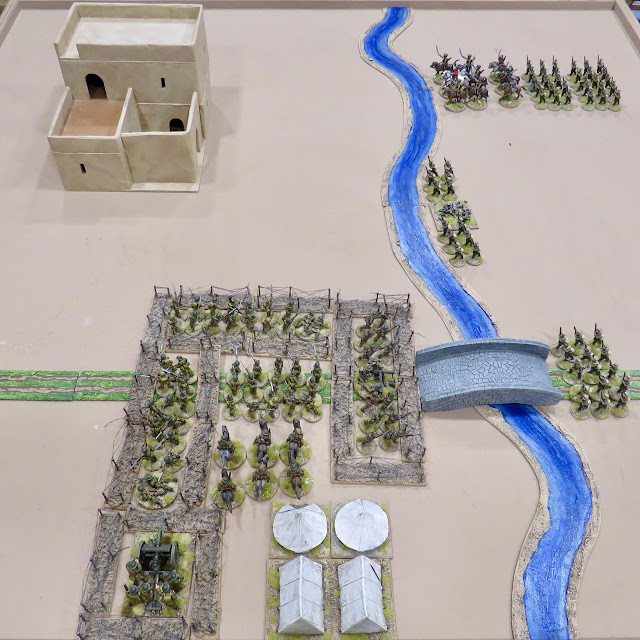 Returning to Stlojia, von Eggenberg found an army of Western Interventionists camped outside the city holding a strategic bridge across the White River! 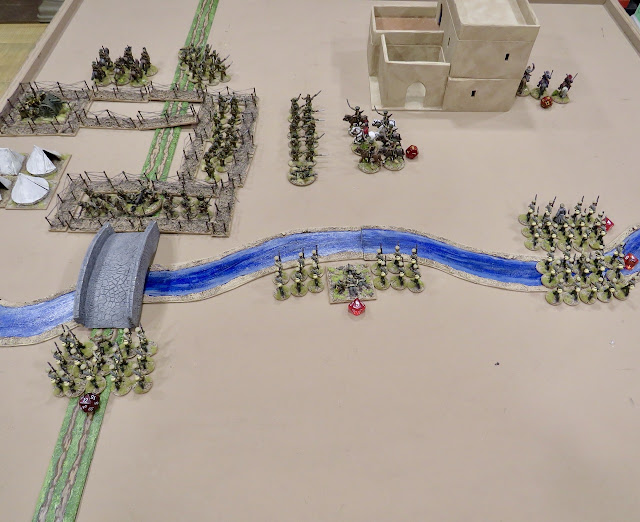 The 1st Battalions of both the 337th and 369th Infantry Regiments advanced towards the Bridge intending to pin down the forces within the camp, while the rest of the force tried to cross a ford further to the east and sneak into the city from the rear. 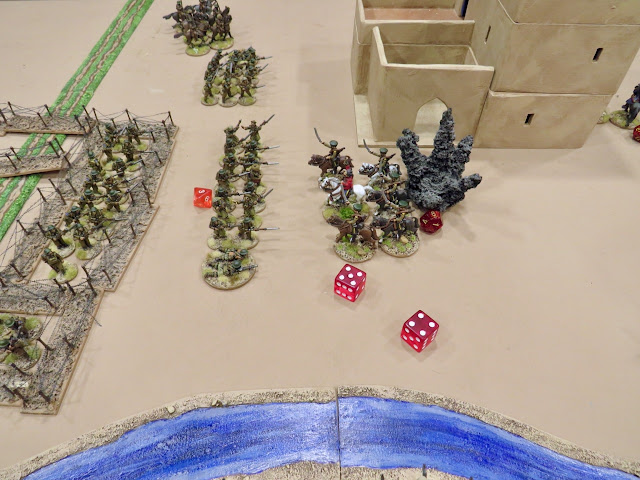 The force crossing the ford took serious small arms and artillery fire as they cross the open ground between the river. 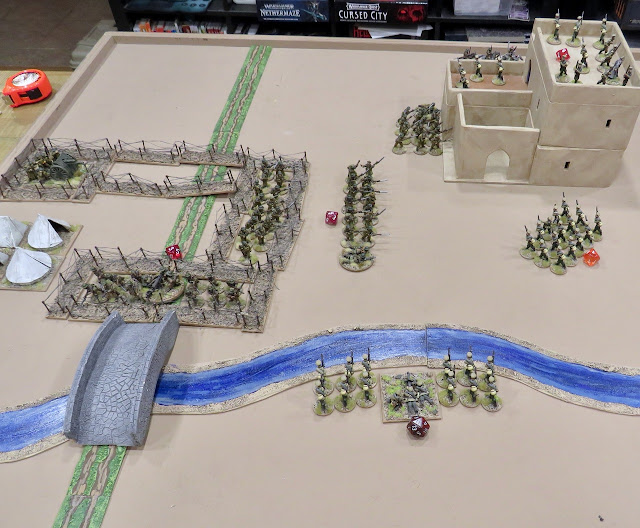 Surviving elements of the 2nd Battalion, 337th Infantry Regiment made it into the city, but not nearly enough of them to hold it against assaults and artillery bombardment of the Canadians. 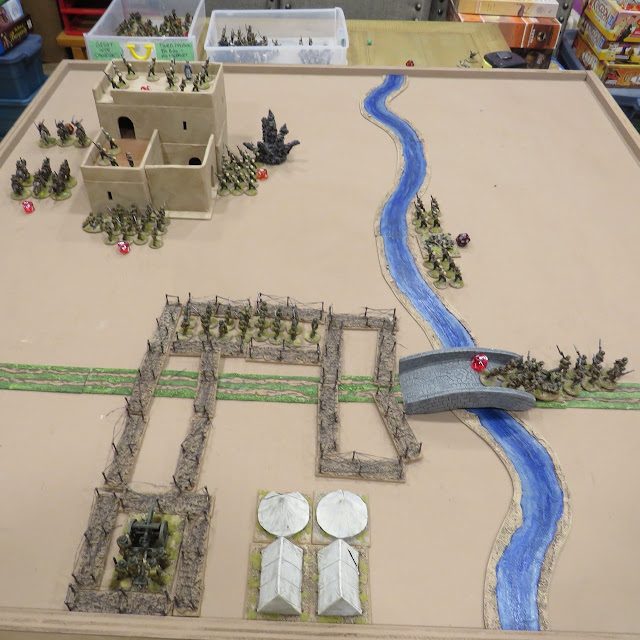 2nd Battalion, 369th Infantry Regiment and the 38th Hussars Cavalry never even made it to the city. After having sustained heavy casualties, the survivors of both elements retreated to the east. 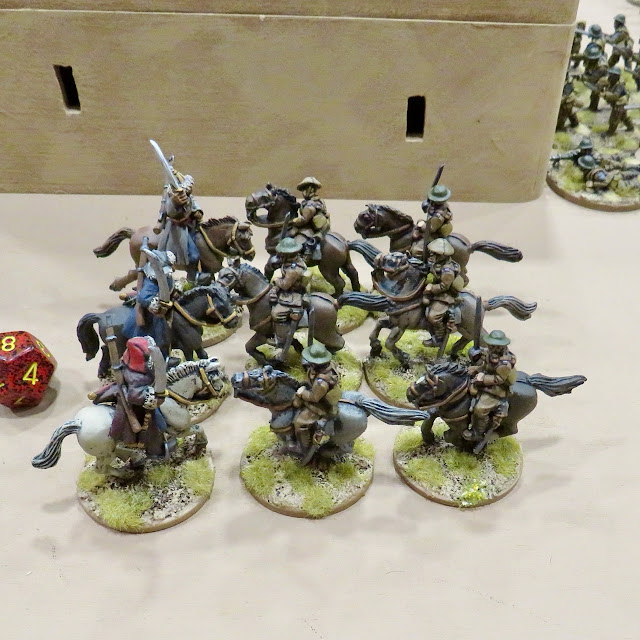 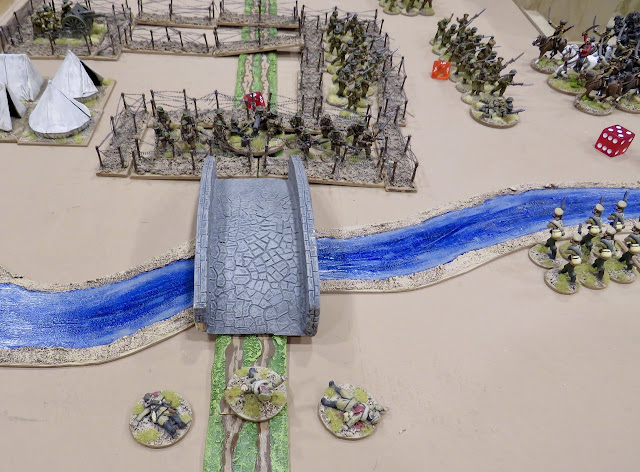 The Russian 1st Battalion, 369th Infantry Regiment took heavy fire from the entrenched 105th Canadian Fusiliers across the river and gave up the field dragging away their casualties. 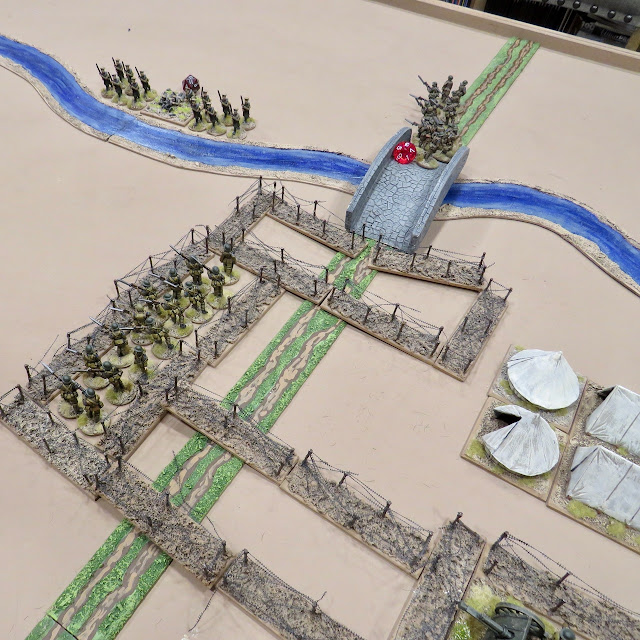 The 1st Battalion, 337th Infantry Regiment had a bit more success, deployed on the south side of the river they were able to pour heavy fire down on the Westerners that trie to assault the city, inflicting serious casualties on the 5th Battalion, Cape Breton Highlanders and forcing them to withdraw. It was not nearly enough, though. With all the other units in the division withdrawn from the field, the 3rd Battalion, Winnipeg Grenadiers storming the city, and 105th Canadian Fusiliers crossing the bridge to flank them, there was little else they could do but retreat to the east, hoping to meet up with other survivors of the Division.

What remained of the Division made their way back to Gura, where they had marched from just a few months earlier, with less than half their original number...

The Illustrious Arm of the Nine Illuminated Terrestrial Immortals under Win-Cao Lo-Fat, The Most Illustrious Beacon of Celestial Light and Commander of the Arm of Earthly Might marched out of Wei-Li planning to invest Bashkent. Just as they were coming out of the wintery pass that lead to Bashkent, the Illustrious Leader that the Red Horde was already besieging the city, after having beaten an army of Tsarists!? At this the Illustrious Beacon turned his army about and marched back through the pass to Ulaan-Goom. Many were dispirited by this hard march all for nothing and deserted the army along the way.

Things not looking good for the Tsarist cause...

I did take a LOT of photos and took DETAILED notes, thinking I might do some more detailed, turn-by-turn, blow-by-blow battle reports... I might get to those later this week... or not... That seems like a lot more work and I probably have better things to do!

The State of Things at the end of Winter 1917 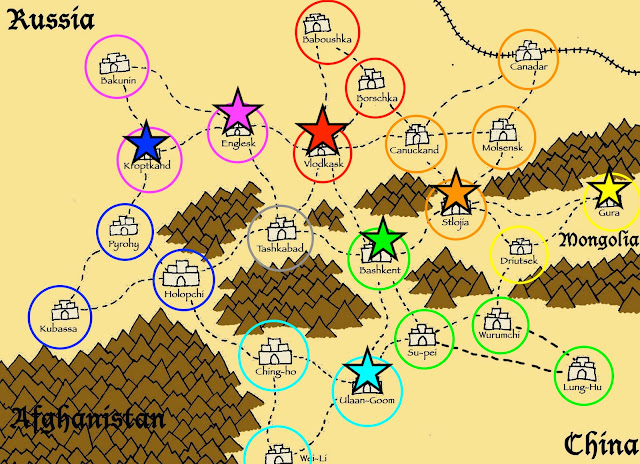 (DAGNABBIT! I just realized I turned the circle around Bashkent GREEN!? It should be grey, like Tashkabad, as it has not yet fallen to the Red Horde that is currently besieging it...)