I took a bit of a break from painting terrain to finish up this Drukhari kill team Amanda wanted me to paint for her. I'd hoped to post these Sunday, but when I went to help her write out the list Saturday evening and come up with names and stuff and write this post, I realized I'd only painted up 88 points worth of stuff!? So, that night I quickly assembled and yesterday painted up a couple more to bring it over 100 points (and give her some extras she could put on her roster and swap out for... something...?). At some point I should probably paint up a few more kabalite warriors to give her more shooty options, but for the time being this should get her going and most of our games, so far, have denigrated into mid-zone melees, which the Wyches should excel at!

(We have a whole ARMY of Drukhari that Amanda's expecting me to paint up for her at some point!? Yikes! Hope she's happy with these for the time being!)

Kill Team Crimson Wave are Ascendant Murderers; having risen from the ganglands of the Dark City, they members of this Kill Team now have much greater ambitions. Currently they are raiding real space as part of a Harvest - collecting samples of flesh from the lesser races. The Crimson Wave are reckless - regardless of the mission, the members of this Kill Team have their own hedonistic agendas to pursue.

(Inspiration for the Kill Team's name came from the song Crimson Wave, which we heard at a recent local Burlesque show).

The Team consists of: 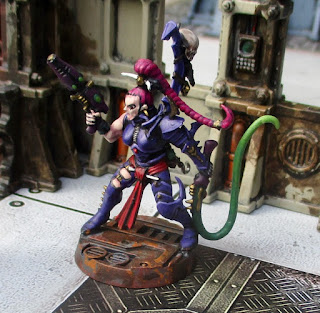 Vulvatrix of the Crimson Wave - Wych Cult Hekatrix - Leader - Blast Pistol and Agonizer - 13 points
Vulvatrix is Unforgiving, she strives for perfection, and accepts nothing less from those whom she fights.

Khatryx Veluxis - Wych Fighter - Zealot Specialist - Razorflails - 11 points
Khatryx has a Darkened Soul - Over long centuries Khatryx had enacted countless atrocities and is now only rarely amused by them.

Kladys Vaganix - Wych Fighter - Combat Specialist - Hydra Gauntlets - 11 points
Gladys is Extravagant - she had developed a taste for finery, and ruthlessly pursues the fulfilment of her desires. 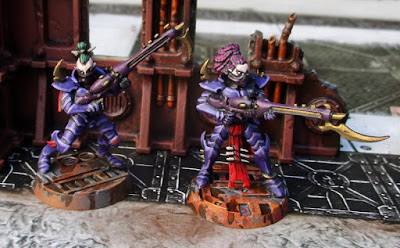 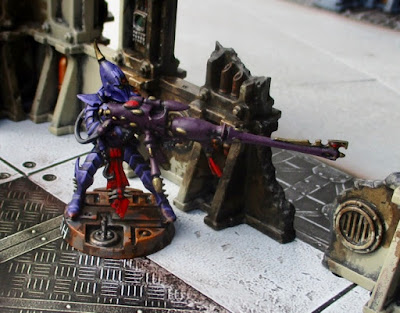 Thrixxesh Xosh - Kabalite Gunner - Sniper Specialist -  Dark Lance - 12 points
Thrixxesh has a Predator's Eye - No detail is too small to escape the attention of Thrixxesh.

Because Amanda has a hard time telling one from another, I originally had done them in a variety of hair colours (usually, I think, wych cults tend to dye their hair all the same colour) but to further help her in identifying them, I painted their names on the backs of the bases.

The total for these (so far): 104 points - so one of these will have to be left behind to watch the Raider they flew in on. If we kick off a campaign it would probably one of the Wyches left behind. Both Kabalite warriors would have to be fielded for their "fire team" to gain experience.

As I mentioned earlier I should probably paint up a few more Kabalite Warriors for some more shooty options, including a second Kabalite gunner - maybe with a Blaster or a Shredder. Not sure what else to add... Kabalite Warriors and Wyches are the only options for Drukhari Kill Teams... so far... I'll bet there will be rules for a Succubus in Kill Team: Commanders. But we'll have to wait until that comes out to know for sure...

Amanda did say once I finished these she would play a game with me, every day, for a week... so hopefully these will see some action this week!

I've had a bit more of a look through Rogue Trader and I'm pretty excited to play with that - but I'm feeling like I need to get some more stuff done for ToonCon before I can really sink my teeth into that... Having read through most of it, the only disappointment I have with it is that you can play the Elucidian Starstriders as a Kill Team - which consists of Elucia Vhane (the Rogue Trader) and her super special specialists and crew and such... but there isn't a list for generic Rogue Traders... I mean, I suppose you could use other Rogue Trader-like figures and play with it "As Elucia Vhane" and stuff... but it's not the same as making up your own from a more generic list. And there isn't really a LOT of choices in the stuff you can have with it... I guess you could just make up your own stuff for "open play" or "narrative play" based on stuff in the books.

Admittedly, there really aren't any other Official Rogue Trader figures currently available from GW, and thus why would they include a list for miniature they can't currently sell you? You'd think with Warhammer Quest: Blackrock Fortress coming out, however, which sounds like it will include a different Rogue Trader and his entourage, they might have considered including generic rules for Rogue Traders!?

I am looking forward to Kill Team Commanders - one of the next expansions to come out. I just hope IT includes generic commanders like Imperial Guard Officer or Imperial Guard Commissar and not Lord Castellan Creed or Commissar Yarrick...

The next rumoured expansion after that is supposed to be Kill Team: Inquisitor - which I really hoped they'd do - but I have a feeling it will include NAMED Inquisitors and some opposing names Daemon, rather than generic lists for Inquisitors with options for the different orders...

They seem to have broken from the pattern or releasing starter teams in the order presented in the Kill Team faction focus index and are skipping over the Harlequins - which has irritated The Girl - and are moving on to Necrons and T'au. The Kill Zone coming with it is the Wall of Martyrs - Imperial Defence Line. I expected they'd put out a Kill Zone including these models with a board with loads of craters printed on it... But I think it's a bit weird that they've done in at the same time as the Necrons and T'au... and included section of the Wall of Martyrs - Imperial Defence Line with both of the starter kits - especially when there is T'au specific terrain they COULD have included with the T'au!?

As much as I'd like to pick up this Kill Zone as well, I'm going to have to pass on it for now, and hope it's still available sometime next year when my pocket book recovers from all the previous Kill Team purchases I've made so far this year. And besides, I would still like to pick up Inquisitor and Commanders when they come out (I'm kind of actually hoping they're NOT this year... but I have a feeling that one will come out in October, another in December, and somewhere in between will be Warhammer Quest: Blackrock Fortress, which I am also interested in... oh, and Wrath & Glory, if/when it's ever released as print copies to retail stores....

Possibly some Kill Team game reports...? Back to finishing up some terrain...? Another Kill Team...? Hard to say... I've been feeling kind of... bleh... this week. It's been hard to motivate myself to do anything. Output has been down - I know, I STILL get a lot done in a week... but I feel like it's down for me and I'm just going through the motions of getting stuff done and not really enjoying it as much as I usually do...