The figures for the battalion, as with all of the 1st Brigade are all from Wargames Foundry 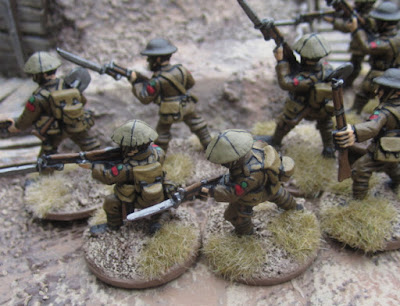 Up next will hopefully be the 2nd battalion. I’d hoped to finish the brigade by the end of the month, but that’d mean I’d have three battalions to do in the next week and a half… it could happen…

Actually, come to think of it, it most likely won’t happen – even if I painted all the figures I have, as I’ve realized I am ONE FIGURE SHORT of being able to complete all four battalions – actually I’m three riflemen short – but I have a spare Lewis gun team I could add to a unit… So if anyone out there in blogger land happens to have a British rifleman they could spare I’d greatly appreciate it! Actually if you had three riflemen and wanted to trade for my spare Lewis gun team – that’d be even better! (I’ll even paint them for you!)

I suppose I could use some of the spares I have from other manufacturers... but something about that bothers me. A lot. (just a bit OCD - but I think you kind of HAVE to be to get anything done in this hobby!)

2nd (Eastern Ontario) Battalion, CEF? I started in on them last night and had hoped to have a bunch of time this afternoon and evening to work on them, but I kind of need to get some work done on a few bikes this afternoon...