Legends of the Five Rings - Kamu No Oni

So, I've been looking at my Legends of the Five Rings: Clan War Miniatures...

I... I can't even begin to explain how that happened.

It probably had something to do with the imminent arrival of Xenos Rampant got me thinking about Dragon Rampant...? And that got me thinking of possible campaigns I could run with that...? Maybe it's because it's the time of year I start thinking about the Birthday Bash/Winter Wargaming Weekend in February...? The Clan War collection is one that I could, once they were all painted, easily host an entire campaign of SOME sort, with 6-7 complete armies.

(I got a little out of hand buying these a few years back...)

Regardless... I got to looking at them and thinking about the different clans (and other factions) in terms of Dragon Rampant forces and, when I was looking at the Shadowlands stuff, thought painting these up would be easy and fun!

Could also be used as weird alien creatures in Xenos Rampant! 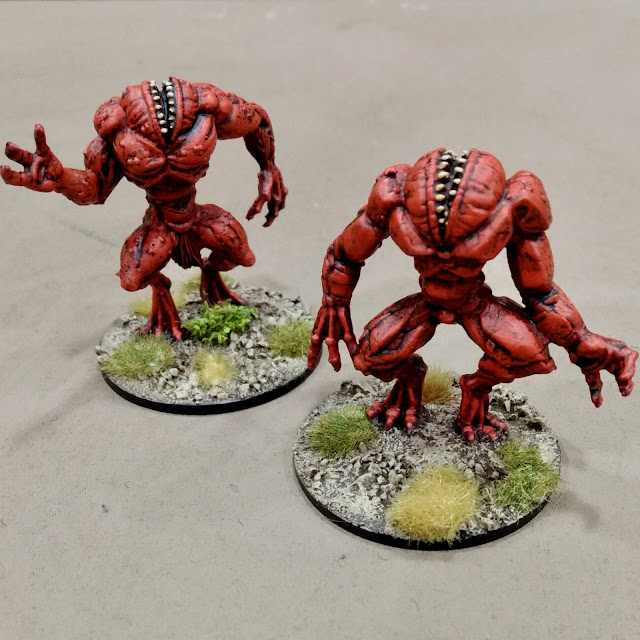 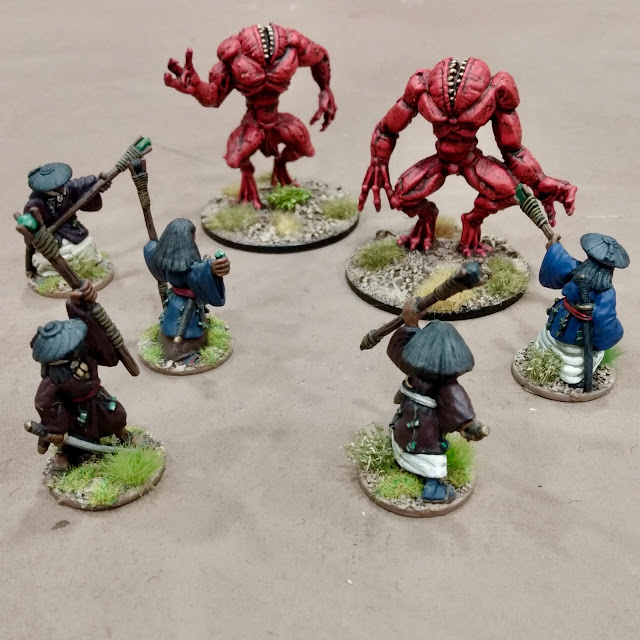 They are pretty big - here they are facing off against a band of Kuni Witch-Hunters.

I think the Kamu No Oni will be Greater Warbeasts (2 - Reduced Model Unit) for 6 points. As Greater Warbeasts they move pretty fast (10" - same as heavy cavalry), but not super fast (like Light Cavalry or Lesser Warbeasts - 12"). The get a Wild Charge and deal some SERIOUS damage with an attack value of 3+. They aren't so great on the defence (Defence Value 6), and only have 6 Strength points... but have Armour 4, so that will keep them in the game and charging.

I was thinking of adding FEAR for another 2 points... Because they DO look terrifying... but I will probably have LARGER Oni in the Shadowlands force... And how will I differentiate them? Other than they will likely be Single Model Units. Also the fact that two models will be removing a lot of enemy from the field, one could assume more than a few of those would be those that flee in terror when the first members of their unit are shredded in the gaping maws of these demons!