Morgwaeth woke with a start... AGAIN!? She had been slain, AGAIN, by one of Sigmar's golden warriors. She cursed Khaine and Morathi, they had escaped the nightmare of the Beastgrave, but not the curse!

Lethyr sat nearby with bound wounds. She had clearly escaped the Stormcasts, but none of the others. The two gathered up the rest and set off through the labyrinth in search of answers. Surely there was some way to escape! They were so close to home!

Amanda had to stay on campus late on Wednesday to teach a dog yoga class...? So we didn't end up doing Warhammer Wednesday this week (which worked out, because I didn't finish this week's warband - Da Kunnin' Krew - until FRIDAY!?). So, Saturday afternoon we sat down to play this week's game.

I won the roll off for setting up boards, for once, and had Amanda choose her board first, then I set up. She chose the Profane Larder and I chose The Tortured Coil and set it up long edge to long edge with hers. 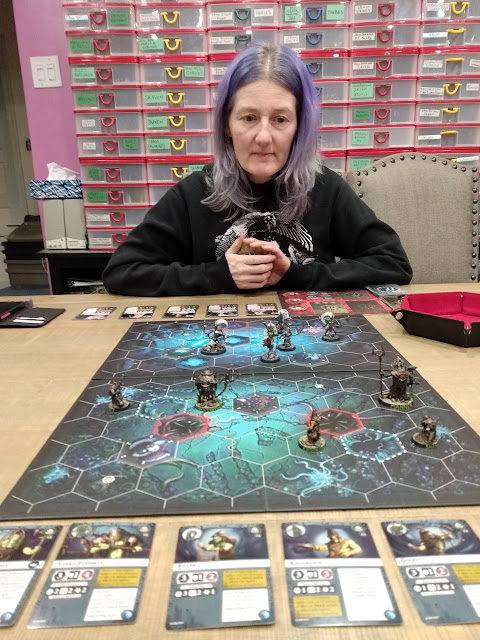 Objectives and Gloom tokens were set up and warbands and we were ready to go!

I won the roll off to determine who goes first and let Amanda. 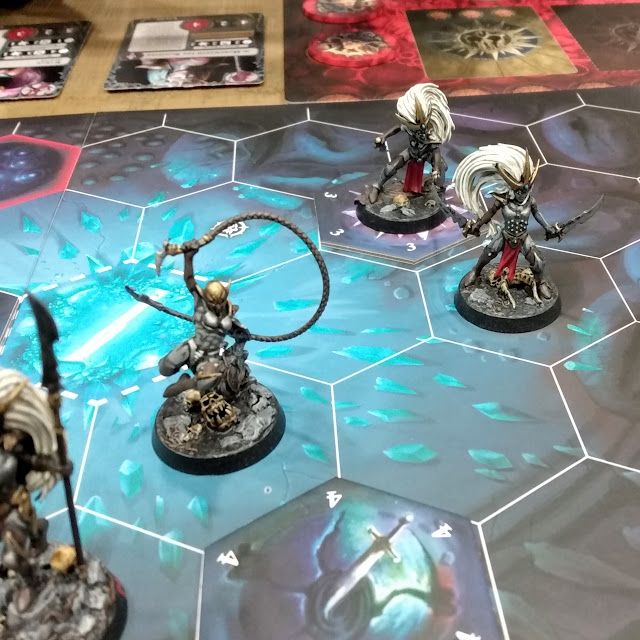 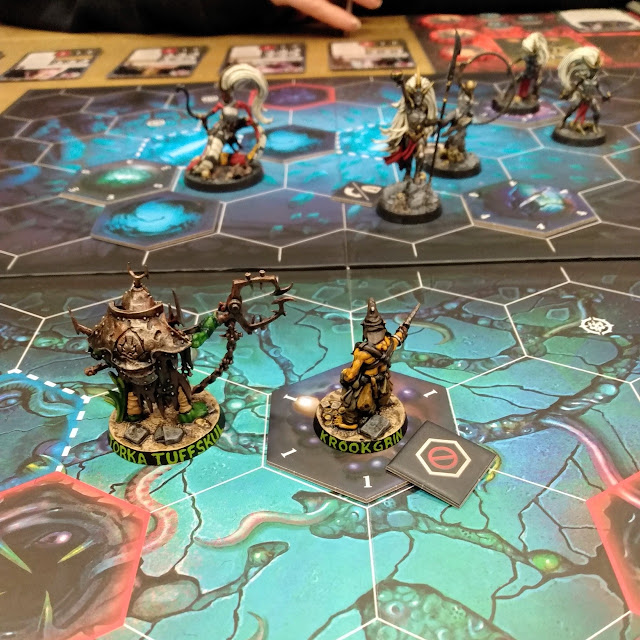 I wasn't quite sure where to go or where to attack first... so I just had Krookgrin step onto Objectve #1, before one of the Daughters of Khaine danced over onto it and Amanda scored points for holding stuff in both territories... 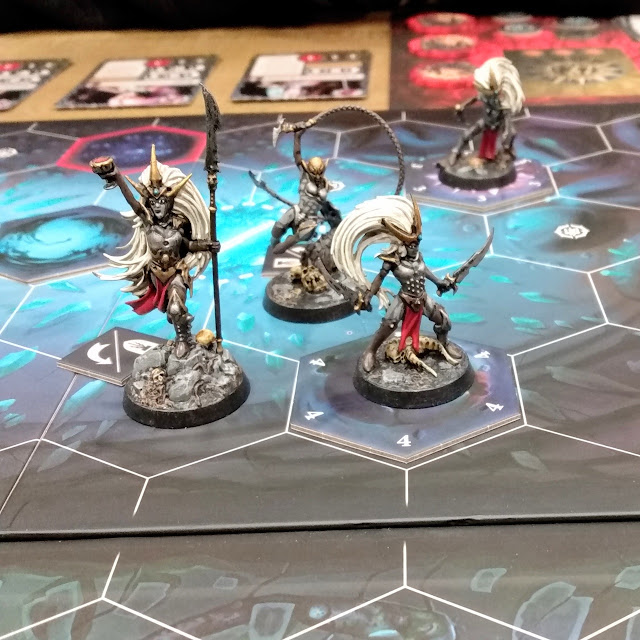 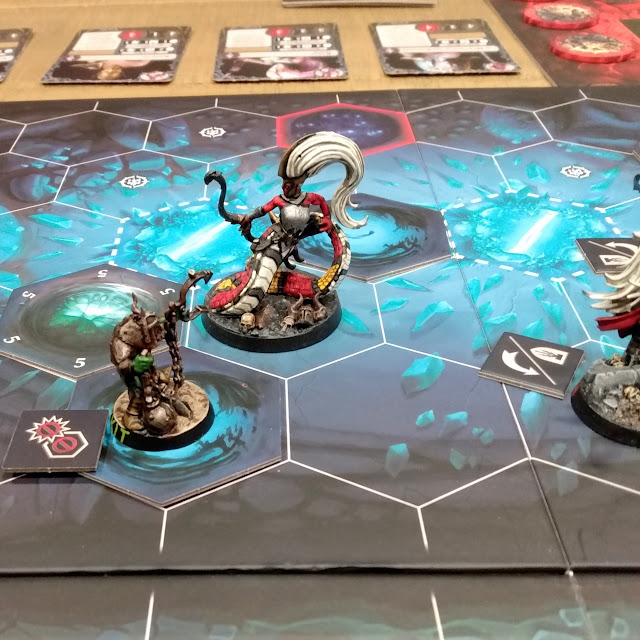 I had to start attacking SOMEWHERE, so Grikit charged into a Gloom hex and attacked Kyrae. I totally wasn't expecting him to do anything of use... I just wanted him to get next to her and just survive her inevitable counter-attack, so he could provide support for... well...someone bigger and meaner to step in and kill her.

(Grikkit counts as two fighters when providing support. Also, making an attack while being supported or supporting another friendly fighters attack is how Da Kunnin' Krew inspires!)

Grikkit exceeded ALL expectations by rolling a crit and dealing TWO damage, leaving Kyrae with one wound remaining (vulnerable - an actual key word describing a fighter with only one wound remaining - DaKunnin Krew has all sorts of cards that give bonuses or Glory points for attacking or taking out vulnerable enemy fighters!) 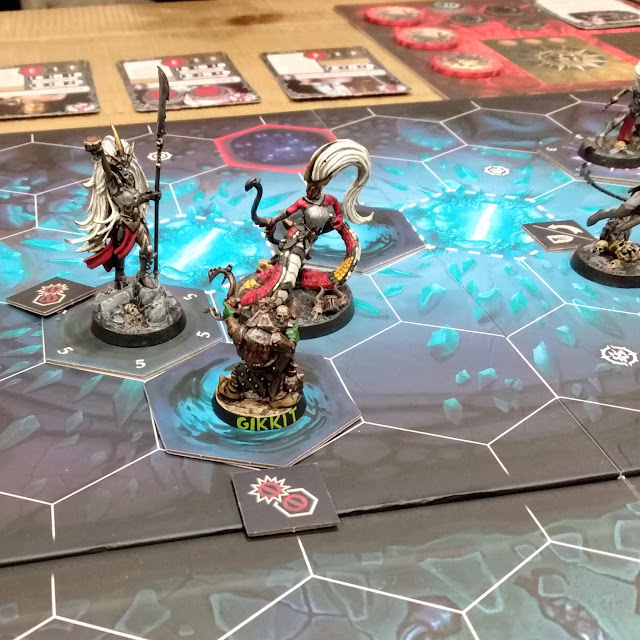 Well... Kyrae did not hit back... MORGWAETH danced onto Objective #5 and slashed at Grikkit. I figured it was all over  for him... but we TIED, with one success each... 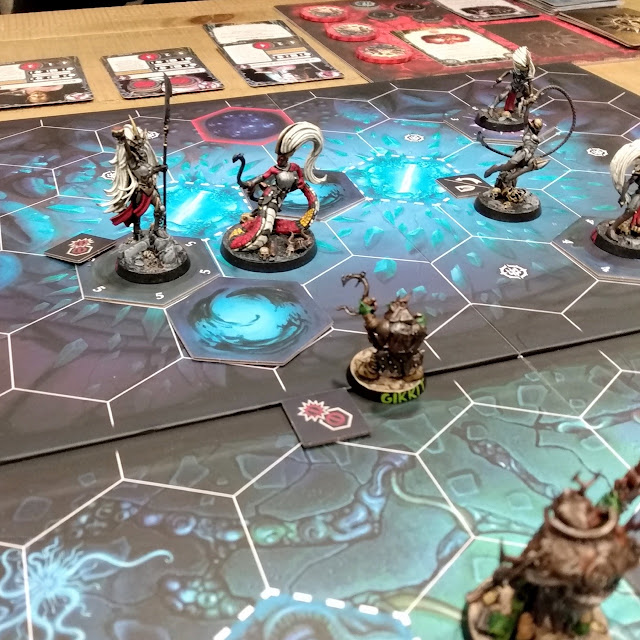 So Amanda pushed him away... and scored Bold Conquest (+1 Glory Point after an activation in which her leader made a charge action and was holding an objective)

Being pushed away would have spoiled all my plans... except I had a handy plot card called Creeping Doubt, which allowed me to push one friendly fighter 1 hex closer to a chosen enemy fighter - so I pushed Grikkit right back into the Gloom Hex. Then, if that pushed friendly fighter is adjacent to the chosen fighter, I get to stagger the chosen enemy fighter. which he was... so I did... 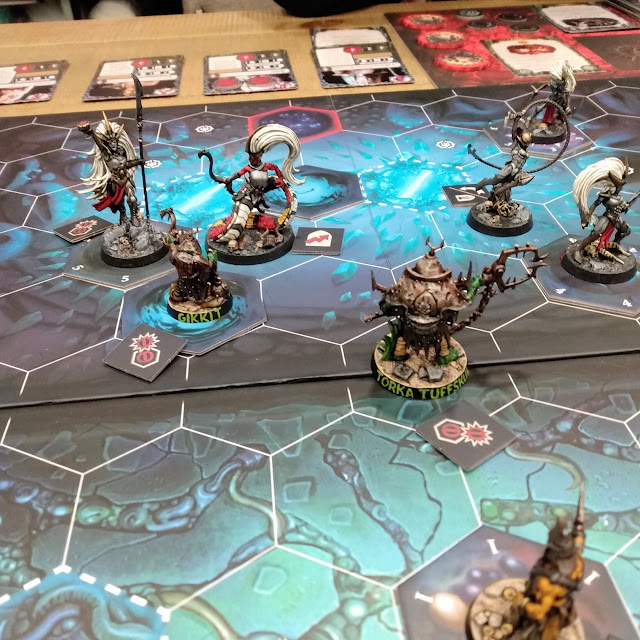 Then on my turn Torka Tuffskul moved up into a position where he could hit both Kyrae and Kyrssa and/or support attacks on either - because he can count as supporting an attack against an Enemy fighter that is within TWO hexes of him!

First, however, he was attacking Kyrae, with help from Grikkit counting as two supporting fighters... the only result that could fail was SMASH (hammers) 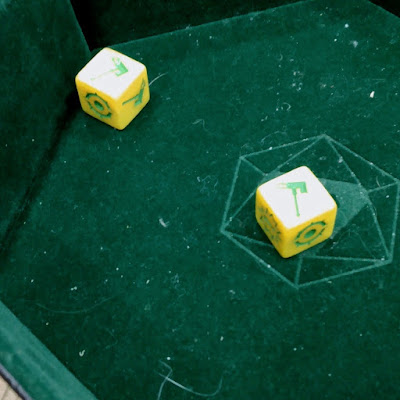 So of course he rolled two hammers... Oh, but wait, Grikkit Staggered Kyrae, I get to re-roll one attack die.... ANOTHER HAMMER!?!? FML. 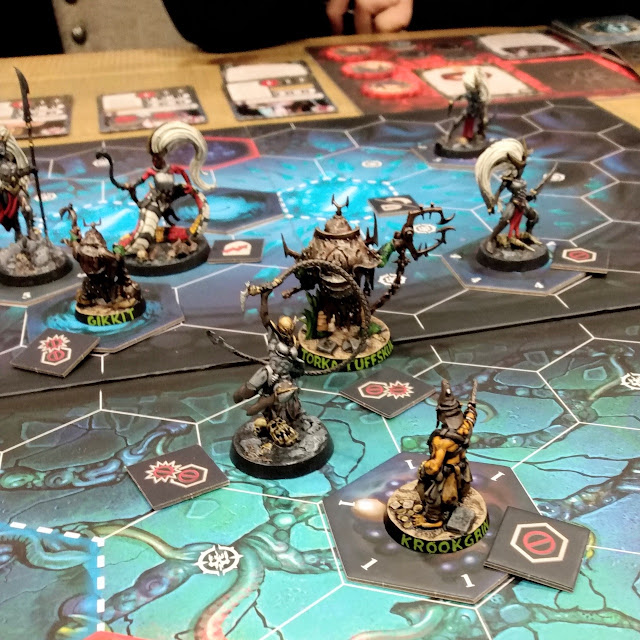 Khamyss danced right past Torka to attack Krookgrin (it just occurred to me, writing this, that Krookgrin should have counted as supported for defence, due to Torka being adjacent to Khamyss... not sure it would have changed anything... But I'm pretty sure I forgot about that). Khamyss hit with the first part of her combo attack, dealign two damage to Krookgrin, but luckily missed with the second (or he'd have been dead!) 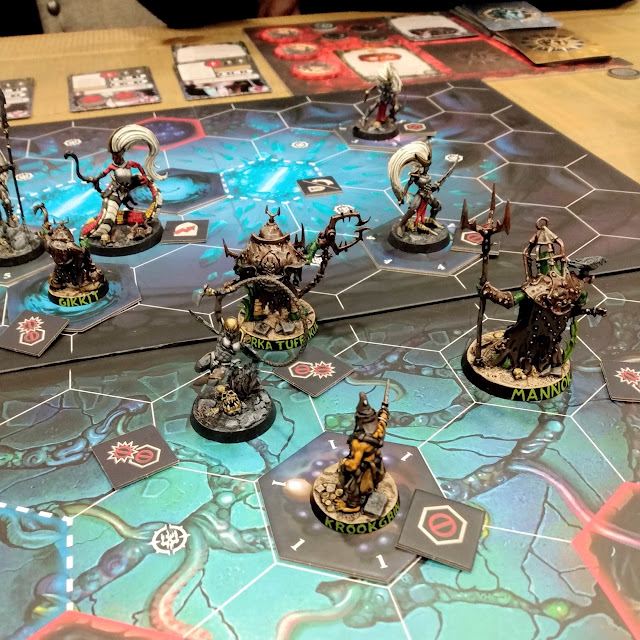 Mannock charged and attacked Khamyss - and was supported by both Torka and Krookgrin - and took out Khamyss! This scored me +1 Glory Point, inspired both Krookgrin and Mannock, and I was able to upgrade Krookgrin with a potion he was able to use to heal the two wounds Khamyss had dealt.

So Amanda was down one fighter, but lead in points 4-1...

Round two started with a LOT of fighters within attack range of each other... I won the roll-off, so thought I best start the stabbing!

Torka attacked Kyrae again, and this time finished her off. I got +1 Glory for taking her out and then scored two Surge Objectives; Malicious Blow (+1 for taking out a vulnerable fighter) and Gristle for the Mill (+1 for taking out a fighter with a wound characteristic of 3 or more). This tied up the game...

Then Amanda started upgrading everyone... Morwaeth got Great Strength (+1 Damage) and Duellist's Speed (push one after an attack action) and Lethyr got Great Fortitude (+1 Wound) and Grim Tenacity (cannot be driven back)

I played Intimidating Phosphor on Gikkit making all attacks against him -1 attack dice until the end of the phase, he's the target of a gambit or dealt damage (I figured if anyone deals him damage, he'll be dead anyway... but -1 attack dice is pretty good) 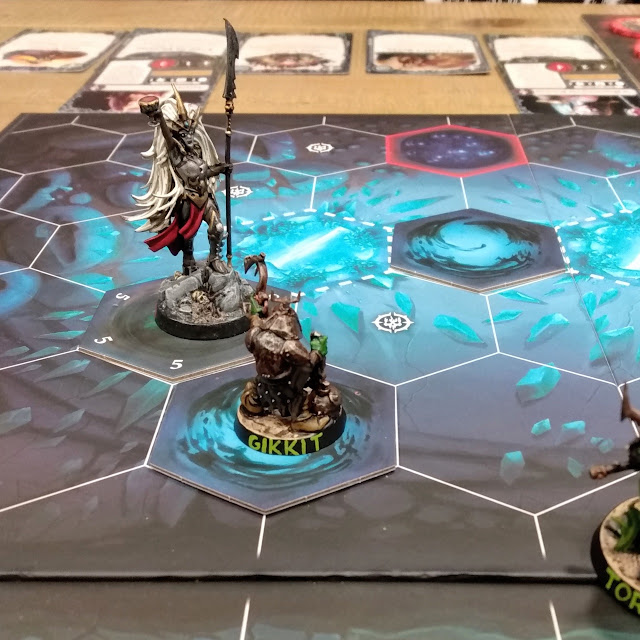 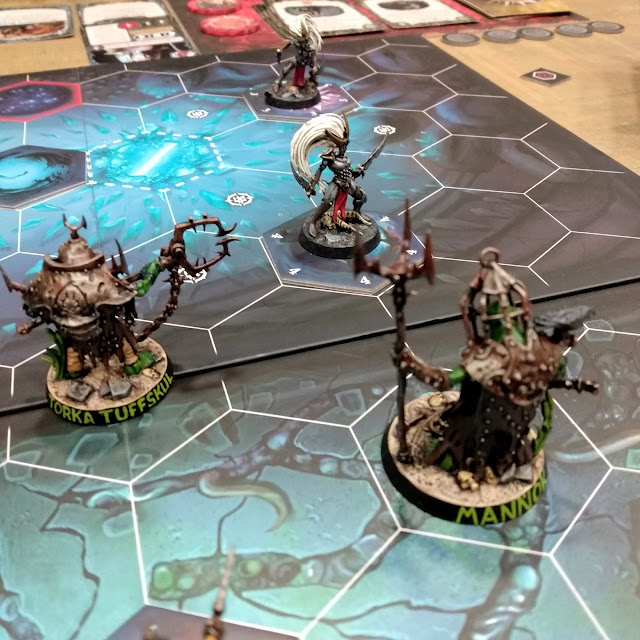 Standing right where he was, Mannock attacked Kyrssa, supported by Torka, and took her out of action! (+1 glory for me!) 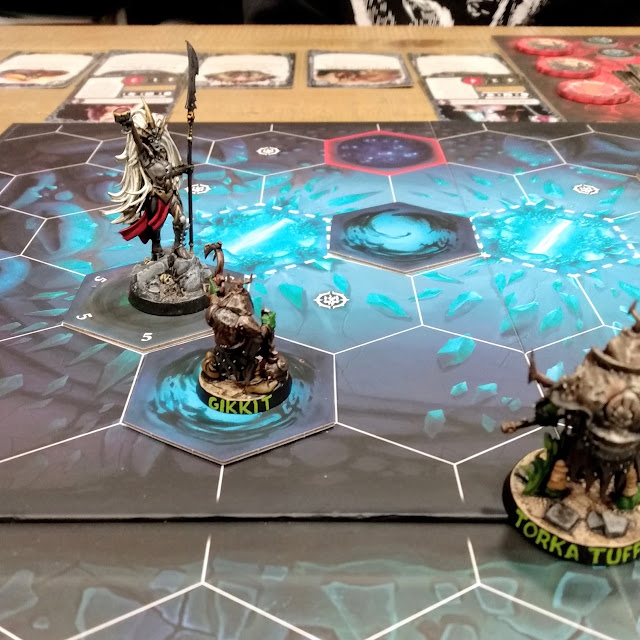 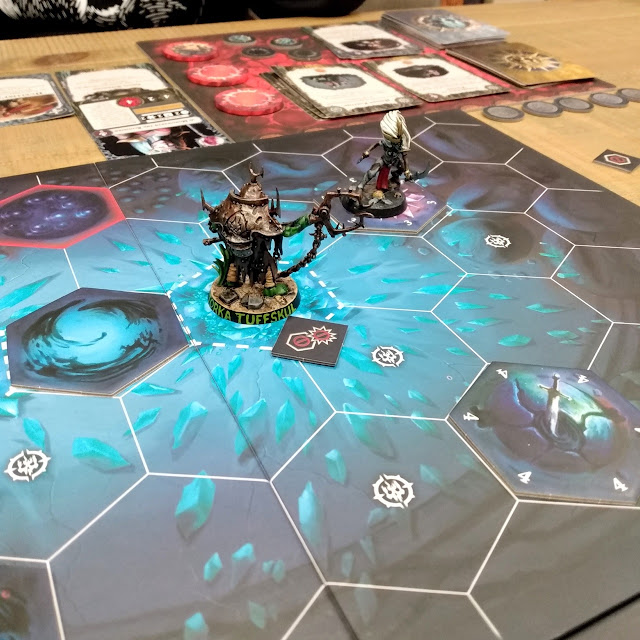 Torka charged Lethyr and took her out! (+1 Glory for me!) 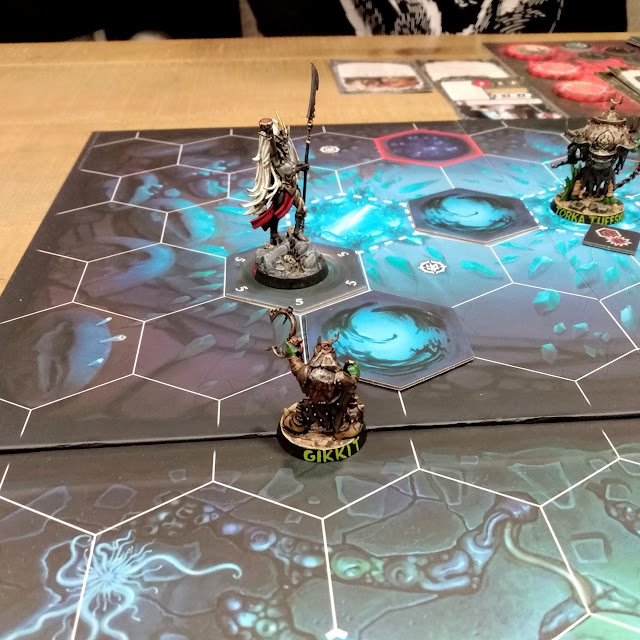 Morgwaeth attacked Gikkit again... and this time tied and pushed him back one... 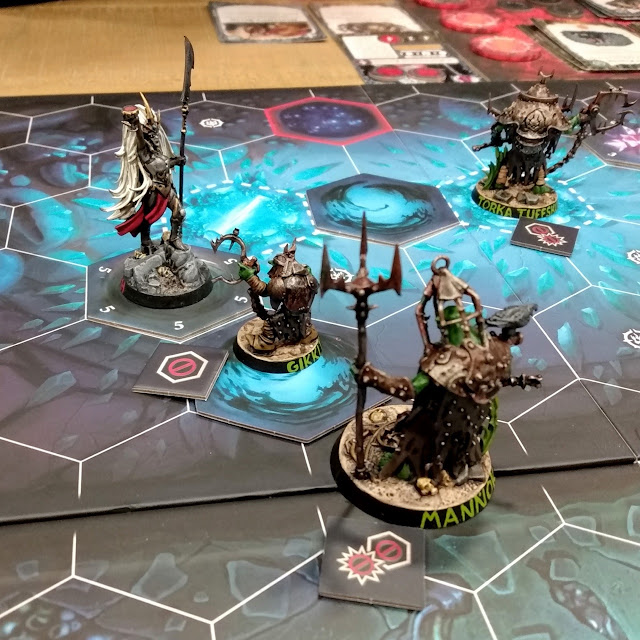 Mannock charged Morgwaeth - and I got to use Mannock's special ability. After the move action part of his super action, he make Grikkit take a move action and move back into contact with Morgwaeth (providing support again!). Mannock's attack hit and dealth two damage! 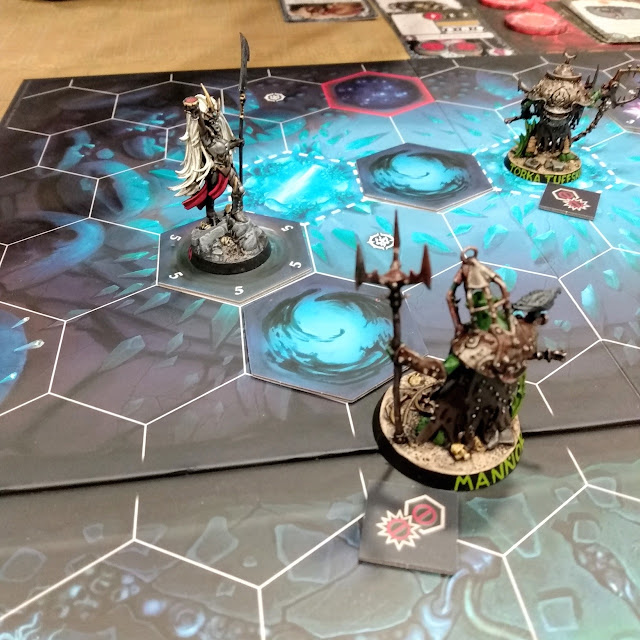 Morgwaeth attacked Gikkit AGAIN!? This time she managed to take him out! (+1 Glory for Amanda!). She also scored Swift Sacrifice (+1 glory for Morgwaeth making an attack that takes someone out of action)

In the round end I scored two Objective Cards: Mind of Mork (+1 if Mannock is alive and I'd scored two or more objective cards during the Round) and Born Survivors (+1 Glory if the number of Friendly Fighters out of action is equal to or less than the Round number!)

I managed to just squeak ahead with 8 glory points to Amanda's 7... but things were looking DIRE for Morgwaeth at this point.... 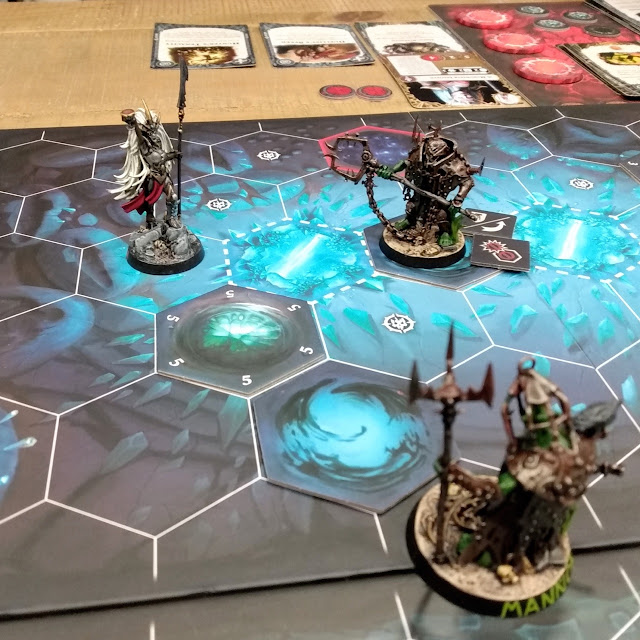 Torka charged Morgwaeth and missed, Morgwaeth scored Steadfast Defender (+1 for being attacked while on an objecive and still holding the objective at the end of the activation - game is tied 8-8)

Morgwaeth attacked back and missed - Tuffskul rolled a crit for defence which trumped Morgweaths two successes! She then pushed one off the objective. 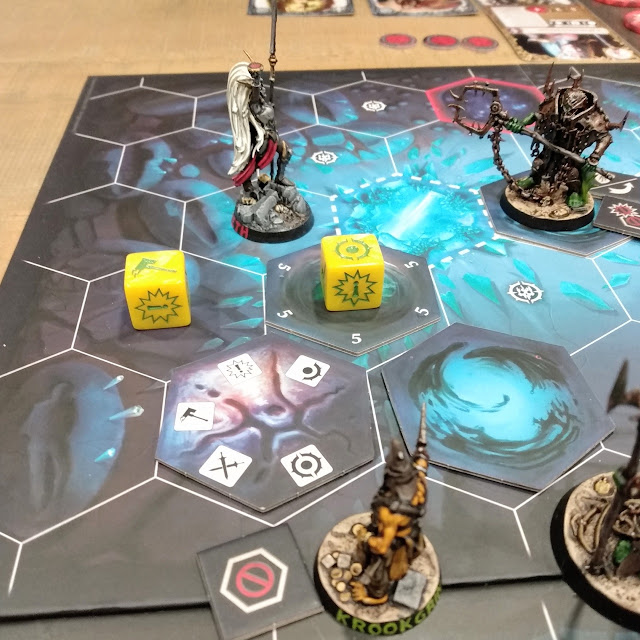 Krookgrin moved up one and then I played a Gambit - FIRE BOMB! it missed exploding right on Morgwaeth... but it blew up close enough to deal one damage - she was now at one wound remaining (Vulnerable!) 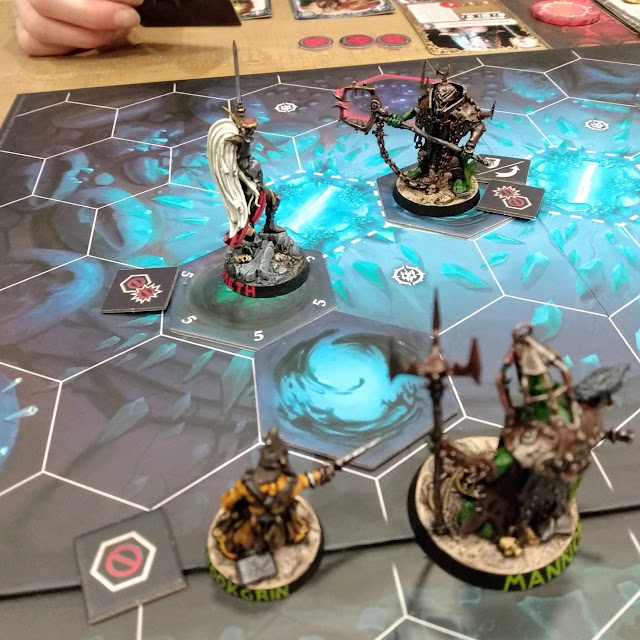 Morgwaeth charged back onto the objective and attacked Tuffskul... and hit... and would have dealt enough damage to kill him... but I played Skin of their teef - a reaction played when a friendly fighter is attacked and dealt exactly the amount of damage needed to take them out, -1 damage... so Tuffskul survived.

I upgraded Tuffskull with Dirty Fighter (Used after a friendly fighter's failed Attack action, if Tuffskul was supporting that fighter. Deal 1 damage to the target of that Attack action). Then I proceeded to attack Morgwaeth with Mannock - supported by Tuffskul - even if Mannock missed, Tuffskul would automatically finish her off.

But it was Mannock's attack that did her in. None of the back-up plans were needed... (+1 Glory for me!) 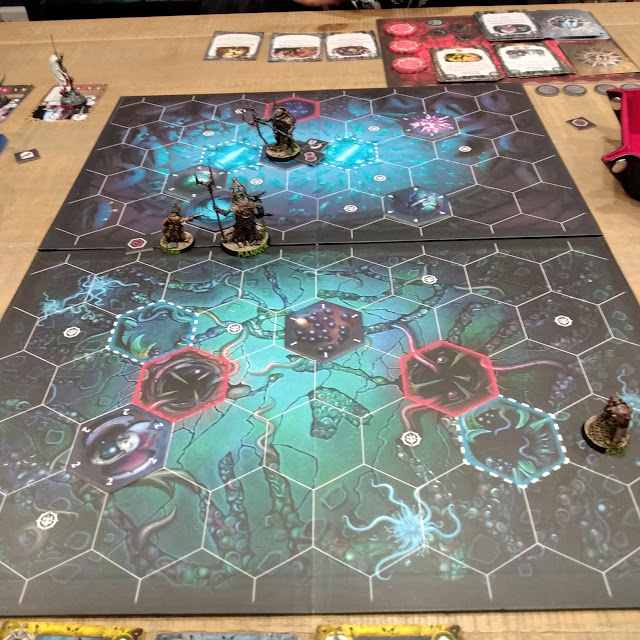 and that left Da Kunnin' Krew alone on the board.

Despite taking out Morgwaeth's entire warband - and losing only one grot in the process, it was a pretty close game! I ended up with only 11 Glory to Amanda's 8!

There are a few less than entirely useful cards in Da Kunnin' Krew's deck. If they were replaced with cards that made them more maneuverable - cards that push friendly fighters or enemy fighters, anything that can bring more into contact to gain those bonuses for and inspiration from supporting other friendly fighters - they could be really NASTY!

Won't be trying that out any time soon, though, I have OTHER WARBANDS TO PAINT AND TRY OUT!!!!