September and October were pretty slow months for gaming... (I mean, I was pretty busy, just with OTHER STUFF!). I was pretty determined to get playing games again in November, however! I sat down at the beginning of the month to try and figure out how many of which games I'd have to play to actually complete either a 5x5 Quarterly Challenge or a 10x10 Annual Challenge (or BOTH!!) and, at that point, things weren't looking great... I don't want to make playing games UNFUN, by feeling like I HAVE to play a game TEN TIMES in ONE MONTH, just to complete a challenge...  or.. MULTIPLE games... 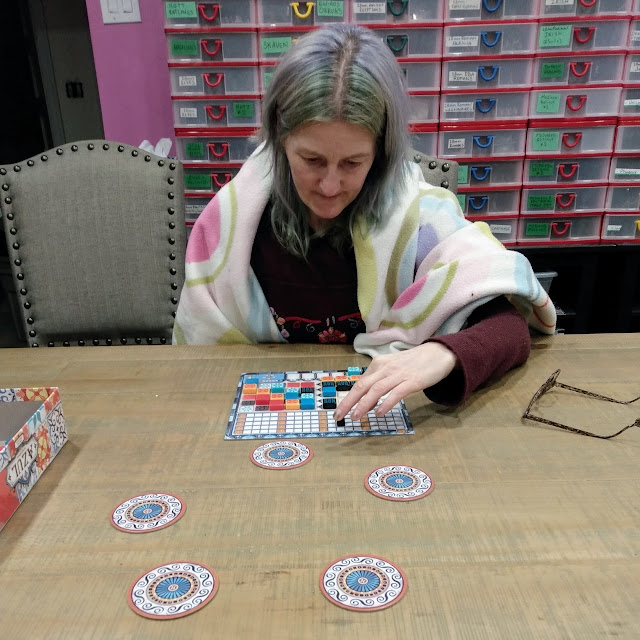 We'd planned to start playing Warhammer Underworlds on Wednesdays again, and I was pretty excited to try out Mollog's Mob... But, when Amanda got home, she was just feeling too tired to play that... but she said she'd play Azul. 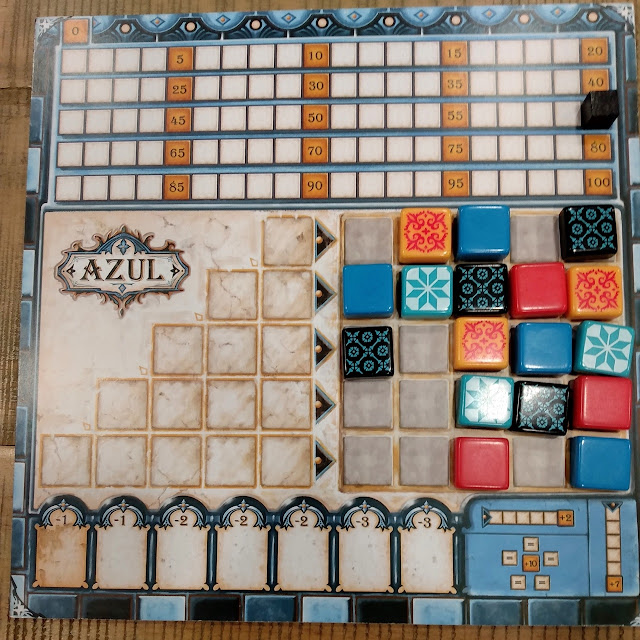 We played a pretty quick game and I squeaked out a win... 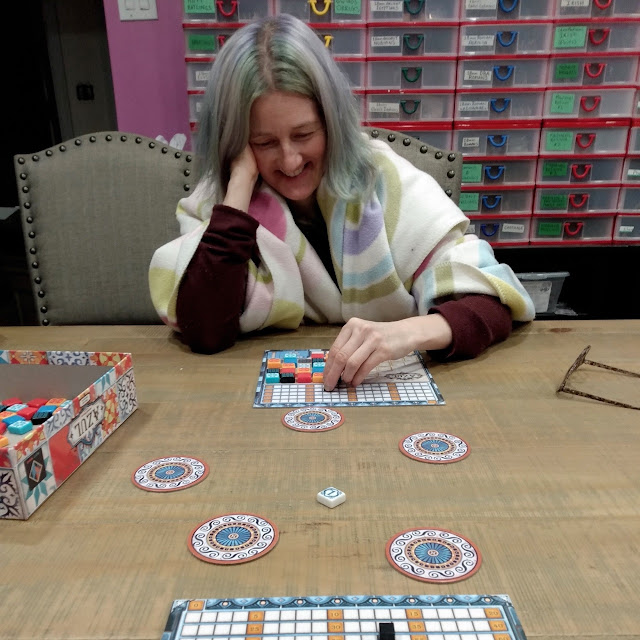 Amanda decided that just wouldn't do, so we played a second game... 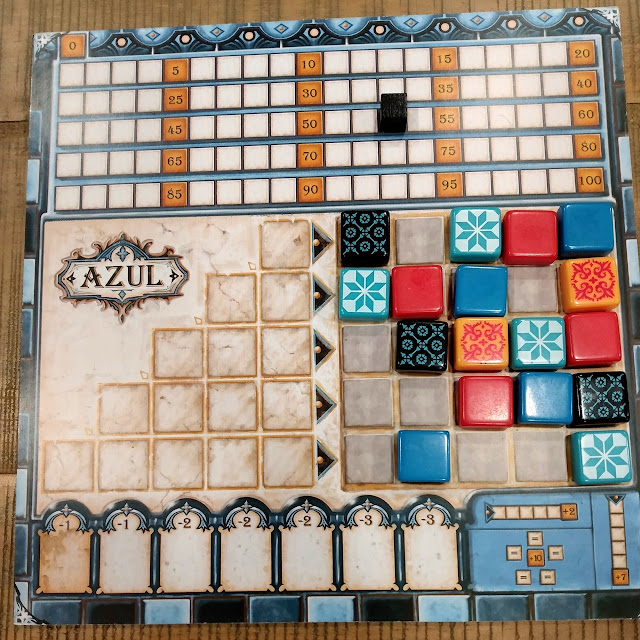 And she just crushed me - I got less points than my first game and she nearly doubled her score!? So then we called it a night... 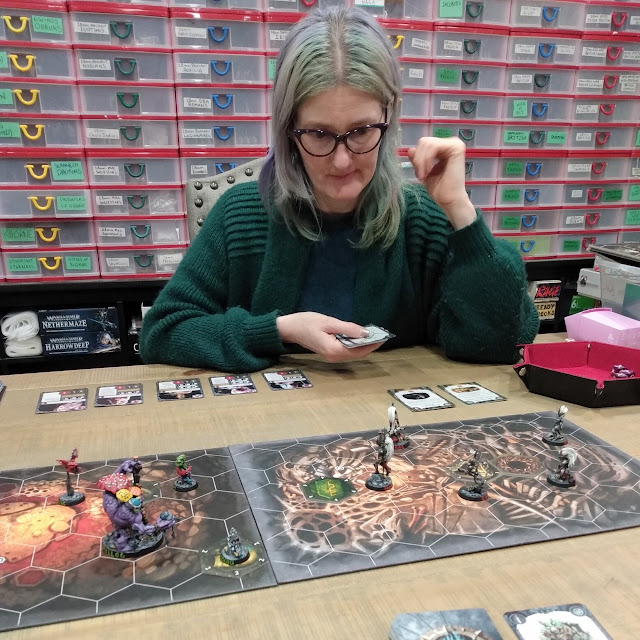 Amanda and I finally got back to playing Warhammer Underworlds. This was the final game we were playing in Beastgrave (for now). For the rest of the year we are planning to play game set in Harrowdeep on Wednesday evenings (plus two extra games over the holidaze), which will get in 10 games of Harrowdeep - for the 10x10 Challenge. My plan is to also paint a new warband every week for Morgwaeth's Blade-Coven to face...

This evening the Blade-Coven faced Mollog's Mob - a Dankhold Troggoth and assorted squig-beast followers and hangers on. Normally, when trying a new warband, I generally try using the cards that come with them - to get a sense of what they're supposed to be about and how well those cards work. Mollog's Mob is one of the Shadespire releases (the first group of releases) and... it shows... Just a quick glance through the cards it became pretty apparent that a LOT of the cards were just garbage and playing them would be very, very frustrating. So Friday evening before playing, I quickly edited the deck... and totally won... With a bit more deck editing, it could be a really nasty warband to face!

You can read a full report and see lots more pictures of the game here: 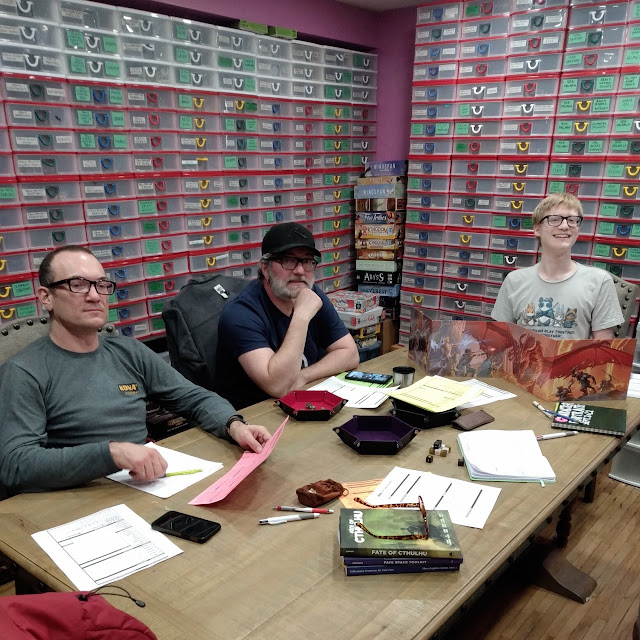 Sunday afternoon, despite our first big snowstorm of the year the previous evening (our power was out for a few hours, but luckily it wasn't terribly cold!) Neil and Jasper joined us to make characters for the Dresden Files Accelerated Role-Playing Game campaign that Finnegan is going to be running for us.

We are playing Agents and consultants for the Vancouver office of the RCMP Special Investigations Division. A Division that is not well known and even less understood. They look into cases that seem strange and inexplicable.

I'm playing a Weregoose that was first recruited about five years previous to the start of the campaign. My Character has previously been an adrenaline junkie/backcountry guide living in Squamish. The character have no control over the changing and blackout during the episodes. During one such episode that involved a number of people being terrorized and/or injured by a giant Canada Goose in Stanley Park one night, and ended up with them waking up in an observation room at a Mental Health facility after they were found in the area at dawn, naked and very disoriented... well that drew the attention of the RCMP Special Investigations Division.

I have some other nebulous background ideas... haven't settled on a name... or gender... I guess I better sort that out, soon-ish! 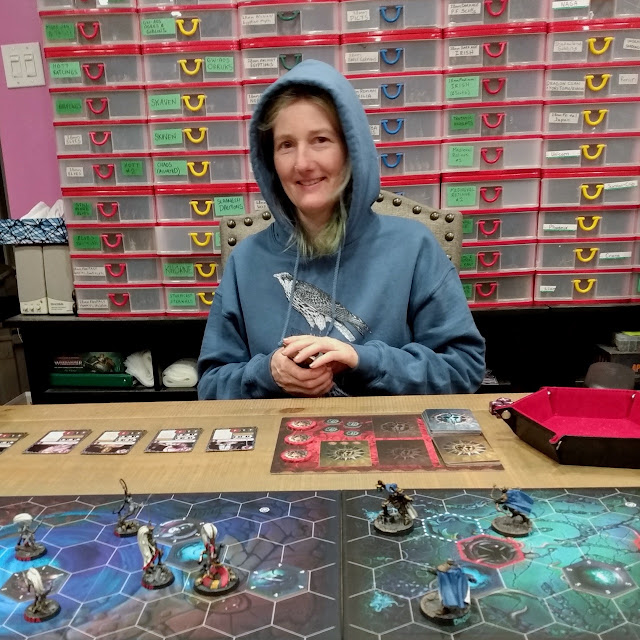 You can see more pics and read the complete battle report here: 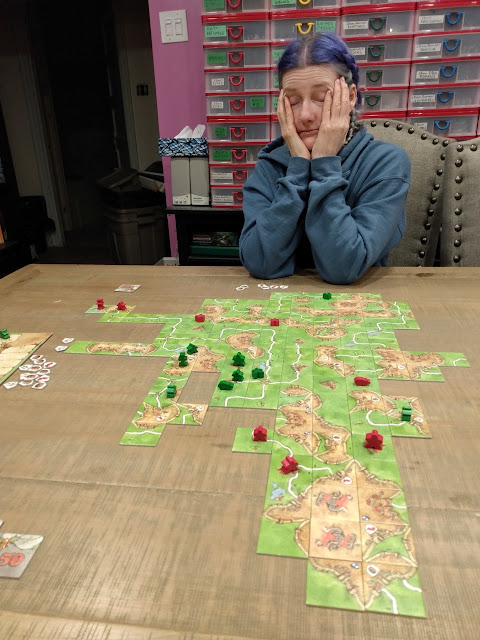 Amanda lamented that I win this game a LOT. And maybe suggested that's why she doesn't love the game. Because it's "[my] kind of game, and [I'm] very good at it..." And... that's not UNtrue... but I resent her suggesting that I win "all the time..."

I actually keep track of these sorts of things on Board Game Geek for this very reason...

I have logged 44 games of Carcassonne on BGG. 11 of those I did not note the scores. Of the remaining 33 games where I did record wins and scores... The kids played in less than ten of them. Ananda played in 28 of them. I played in all 33.

There were three ties (Finnegan and Keiran, Amanda and me, and... I forget the other...?)

The kids won the remaining games. 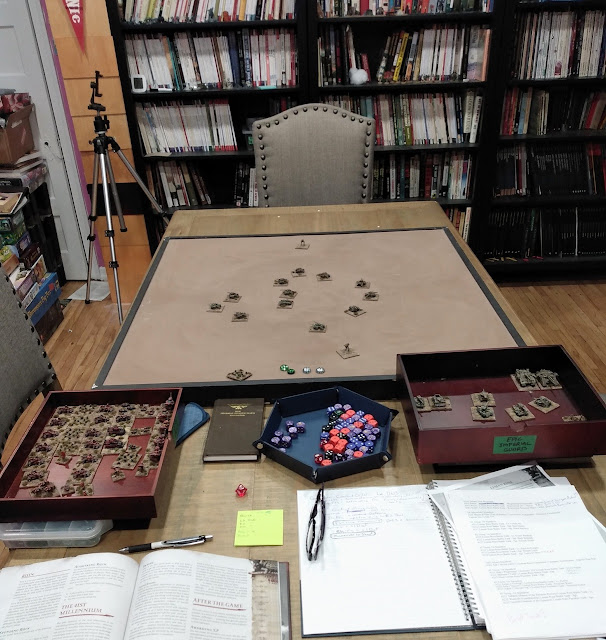 I forgot to take a pic DURING the game... Fun was had, I got to make use of all the EPIC stuff I'd been painting over the last month and got to run a role-playing game again... which I kind of missed.

You can read more about the adventure and campaign here:

Warhammer Wednesday was postponed due to dog yoga.

(which worked out well, because I wasn't actually DONE this week's warband!) 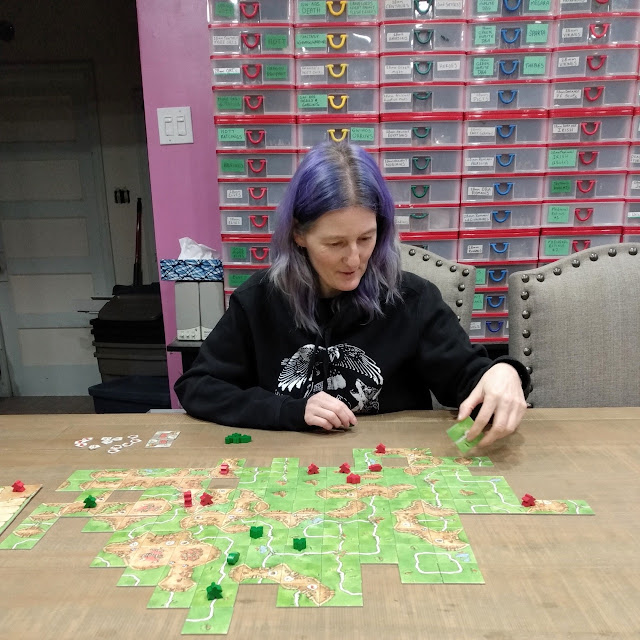 After pointing out the stats regarding the statistical reality of our Carcassonne play outcomes, Amanda was a little less grumbly when I suggested it again this week.

And as if the universe just needed to strike that point home, Amanda could just not stop drawing THE EXACT PIECE SHE NEEDED ALWAYS and beat me by 50 points... Before the end game scoring, she was well over 100 points ahead of me. Only massive unfinished cities and super farming saved me! Warhammer Underworlds! Finally got to try out Da Kunnin' Krew.

You can read the full game report here: 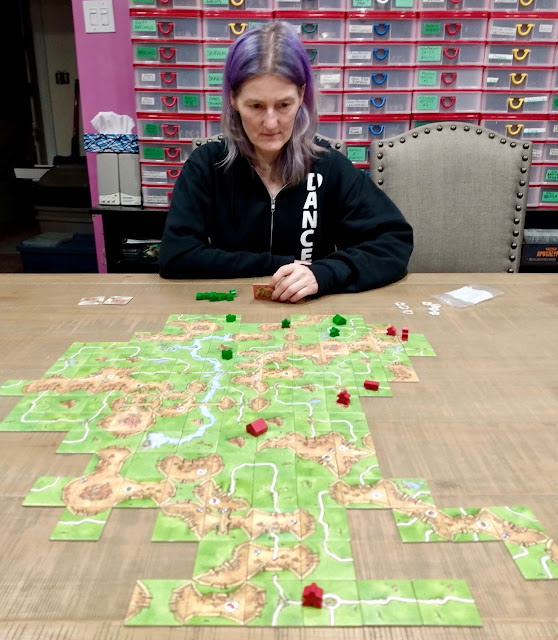 Distracted this week again and didn't get a new Warband finished for Wednesday... so we didn't end up playing any games until Saturday. Played another game of Carcassonne, but instead of just playing with Inns & Cathedrals and Traders & Builders, I also broke out, and reread the rules for the Abbey & Mayor and River II expansions - which was fun. We hadn't played with those for a few years, I think. I hope we'll be able to keep them in the regular play from now on... 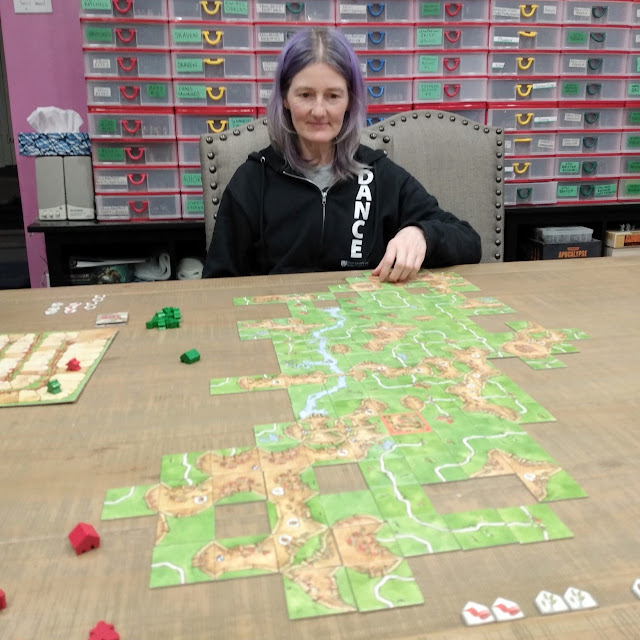 Since we weren't getting to play a Warhammer Underworlds game this week (because I was distracted painting Oni) we decided to get in another game of Carcassonne...  While I won Saturday's game, but a LOT (308-233!?), this game was SUPER close (308-305!?) with Amanda just squeaking ahead!

So that WAS a few more games played than last month! 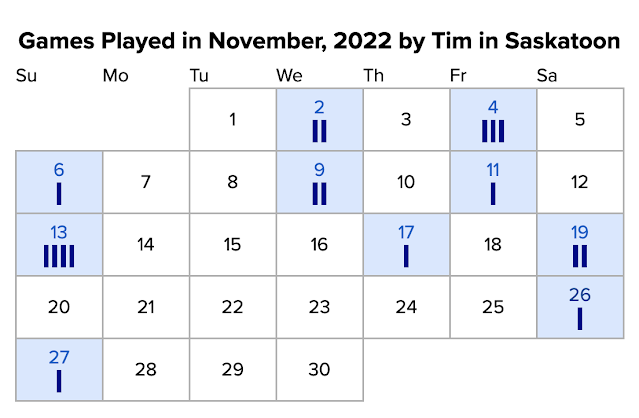 I'm not so sure I'm going to complete any challenges...

Games Played so far this Quarter:

Not looking like any 5x5 challenge getting completed... I mean, it COULD happen... but I feel like it would all be quick games and very forced.

Games Played so far this Year!

Am I still going to play a lot of games in December? I sure hope so! I'd like to bring that total to 100! Twelve games over the holidaze? That seems totally doable! I just don't think I'm going to even try to finish a 10x10 Challenge.

I would like to get in a few more games of Warhammer Underworlds - and finish up a few more warbands. I wouldn't mind another game of Carcassonne and two games of Azul and Five Tribes. That would get those to ten plays this year! Then I'd have about six or seven games that I've played ten time each. Over half of a challenge done, and that's not nothing.

Other than that...? Few more games of Stone Age and some role-playing games (Dresden Files and Wrath & Glory). Maybe some games we haven't played in a while...

I like the IDEA of a 10x10 challenge - I like the idea of playing a game a bunch of times, in a relatively short period of time to really LEARN the game! Part of the reason I like the idea is I have a really hard time READING and understanding rules, so it would be nice to just have to read a few new rules and really learn a game well enough that I wouldn't have to re-read them again every time we played!? It'd be really nice to really learn TEN new games every year... but I just don't think these challenges really work out for me. They always feel a bit forced by the end of the year.

I need SOME kind of roadmap, though, or I end up going NOWHERE... I'll have to come up with something different for next year. Maybe just the Quarterly 5x5 Challenges...? I'm not sure they went so well either, though...

Newer Post Older Post Home
Subscribe to: Post Comments (Atom)
"There are some who call me.... Tim"
Welcome to Tim's Miniature Wargaming Blog. It's not just about Miniature Wargames anymore, really. Hasn't been for a long time. I kind of just keep the name out of habit.
Here you will find reports (and pictures!) of games (miniature, or otherwise) I have played as well as news (and pictures!) about my current modelling and painting projects.... and, occasionally, other stuff...