Here, soon, I will be featuring all of my 28mm forces for wargaming the Vietnam War. The collection is pretty much completed, I just need to get around to taking pictures of them all...

You should be able to click on most of these pictures to see a larger version.

To check out how far (or how little) these have come check out this older blog post:

All of the figures in this platoon are from The Assault Group.

There may or may not be a few more guys in the picture that I imagine would actually be in a platoon. I've seen a few different platoon organizations for Australians in Vietnam. One had 12 man sections with a mix of L1A1 Self-Loading Rifles, F1 Sub-Machine Guns, M16 Assault Rifles and an M60 Machine-gun... Others I have seen have 10 man sections with either the F1 or the M16 - suggesting that the M16 replaced the F1...? Most of the sections of this "platoon" have one or two of each (M16 and F1) so they could be fielded with either - with about 9-10 men - or both with sections of 11 or 12.

I think these were among the first 28mm figures I painted for Vietnam. They were painted more for use with role-playing games - using Savage Worlds Tour of Darkness (I also had fond memories of playing Revised Recon in high school - using old 1/72 ESCI plastic figures)

More recent figures I picked up. I didn't really NEED a second patrol... they're just nice figures... and I like painting figures as much as playing with them... 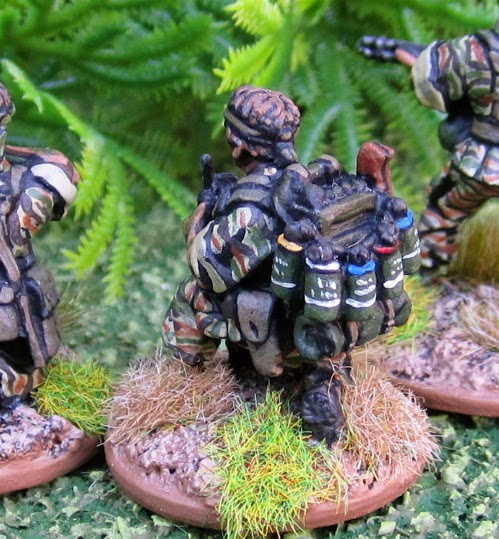 Detail of the the Radio Operator's back.

Another MACV-SOG team in black-dyed uniforms (figures from The Assault Group). 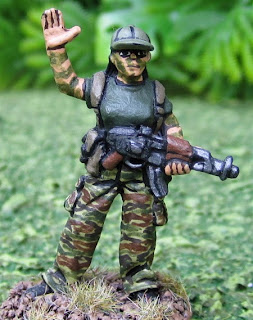 This is a Coppelstone Castings Future Wars figure that I converted to use as a female CIA operative in a Savage Worlds Tour of Darkness campaign.

These are my "Grunts" or "rank and file" American Infantrymen for the Vietnam War - I, for the most part, use them interchangeably as either US Army or US Marines... I know, I know... there are some differences... but most are not big enough for any of the guys I play with to know the difference...

Originally - like most of my forces - I had these all neatly organized into a single standing platoon read for action!  The original platoon was mostly made up of West Wind Productions riflemen and a weapons squad from The Assault Group (details of the platoon is detailed in this old post)!  Since then I've picked up a few more figures from The Assault Group  and others from Baker Company and rather than try to decide who stays or who goes or try to form another complete platoon... I just store them all in a big mess of like-armed-guys and pick and choose as required for any given scenario. 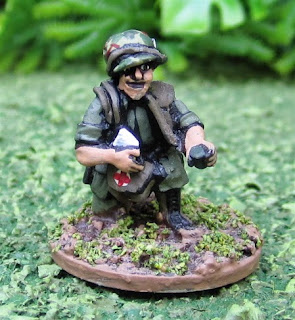 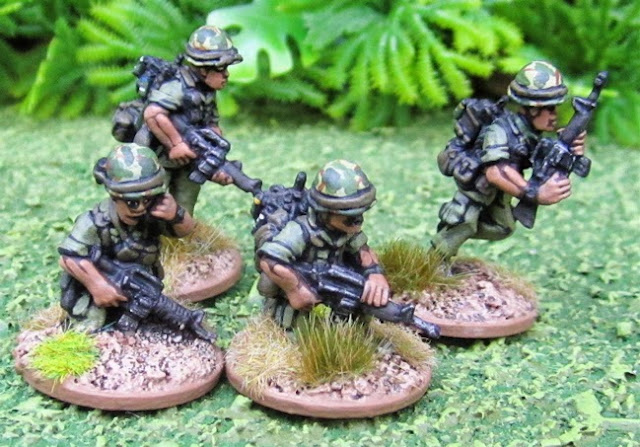 Another Officer and more Radio Operators from Baker Company. 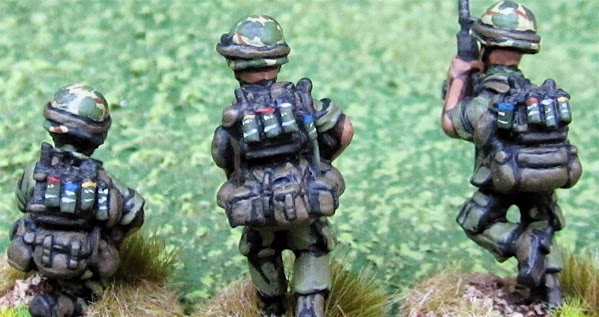 Again with the detail shot of the smoke grenades...

The core of the original platoon - US Army/US Marine riflemen with M16s from West Wind Productions.

...and the last few of the above US Army/US Marine riflemen with M16s wearing no hats at all (or, in one case, a bandanna).

The Weapons squad from my original platoon (plus an additional M60 gunner I picked up somewhere along the way...) from The Assault Group.

Assorted figures armed with M16/M203 grenade launcher combos for later in the war - the four on the left are from West Wind Productions, the two on the right are from The Assault Group.

a few figures from The Assault Group in flak jackets and light order - presumably defending a base or mechanized infantry that can stow the bulk of their gear in their APC...? 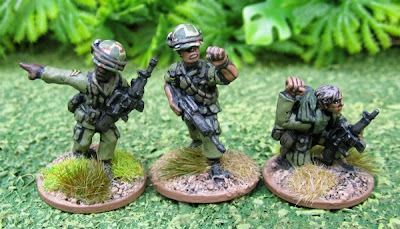 Baker Company Grunts armed with M16s. The Baker Company figures seem a bit cartoony - but I don't mind - I actually like them - I think it gives them a bit more personality.

Assorted extras Dude running with claymores from The Assault Group, and guys armed with M14, Shotgun and a marine with an M16 wearing a USMC cover...

I don't have a lot in the way of light supporting elements. Just the mortars...

I suppose if I ever built a big firebase and was going to do a firebase defence scenario I might pick up and paint some more supporting elements - HMGs...? Artillery...?  Recoiless rifles (especially if said Firebase was in danger of being overrun by PAVN/NVA armour!)

Again, i don't have a lot of armour - mostly because most of the engagements I imagined I'd be playing were small-ish skirmishes in teh jungle where armour really played no part. I do have a couple items... just... because... 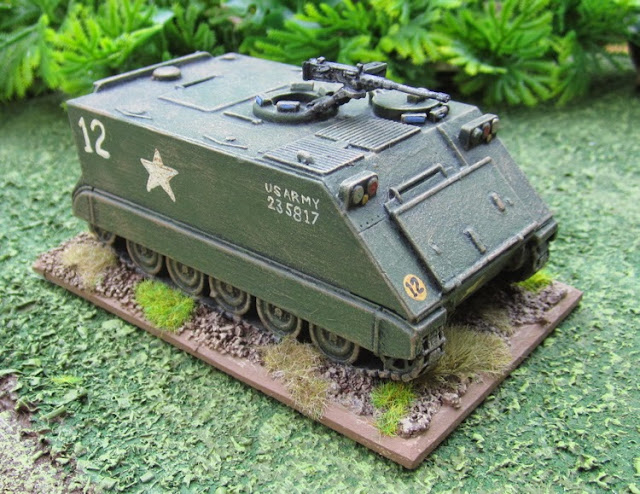 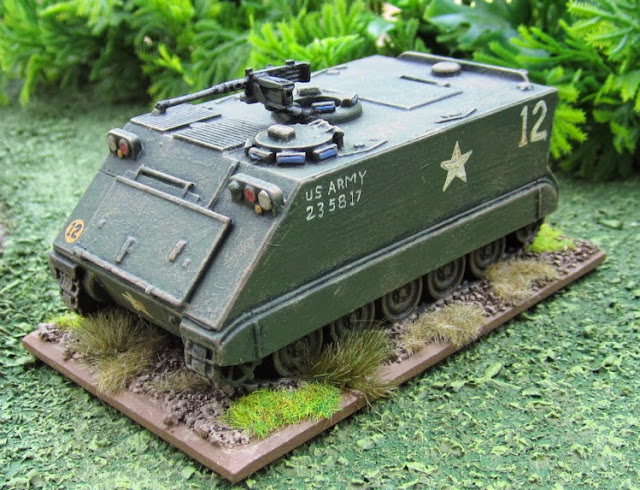 I wouldn't mind getting some ACAV M113s at some point... 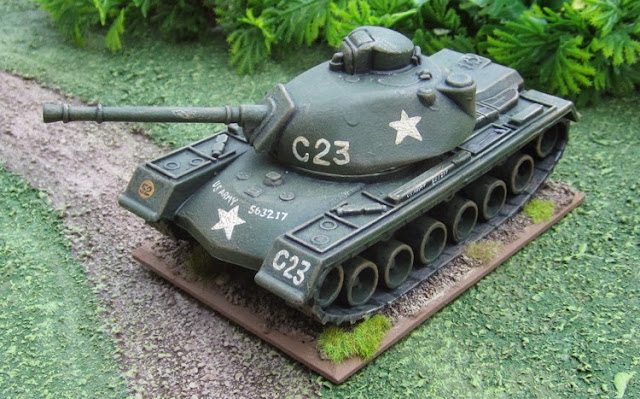 This little gem that i'm passing off as an M48 tank that I picked up at a dollar store in bag of toy soldiers for $2. I should have bought four at the time and made a platoon - the scale is almost dead on! (I suppose I should have put some infantry in teh picture to show the scale... ah well...)

I have a  1/48 helicopter that I assembled almost a decade ago and haven't quite gotten around to painting... I should finish that up... In the meantime here are some downed crew that might need rescuing... 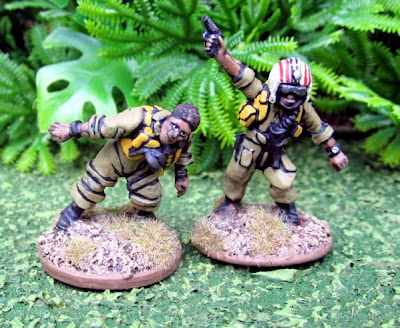 Army of the Repulic of Vietnam (ARVN)

At some point I'd like to pick up some figures to use as ARVN troops. I thought - for the earlier part of the conflict at least - I could use some West Wind Productions World War Two US Marines - the figures are on the smallish size of 28mm and could be passed off as Vietnamese troops with hand-me-down US equipment (M1 rifles and such)...?

These troops are from West Wind Productions and sold as "Montagnards" - they seem to be modelled more after Colonel Kurtz's Montangnards in Apocalypse Now than any historical ones. In Tour of Darkness there are some degenerate "Cham" tribes in the deep dark jungle that are recruited to aid the players in the fight against darker darkness... I think if I were to run it again, rather than calling them "Cham" I'd call them Tcho-Tcho tribesmen - to give the campaign a more "mythos" feel...

(have to wait for another day for pics of these...)

A few support weapons for the PAVN 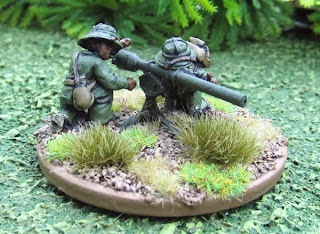 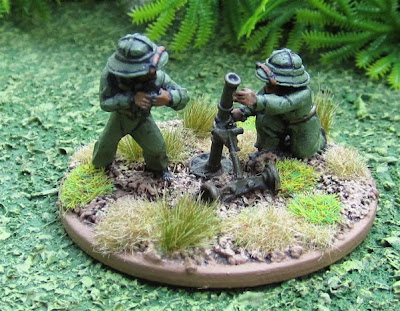 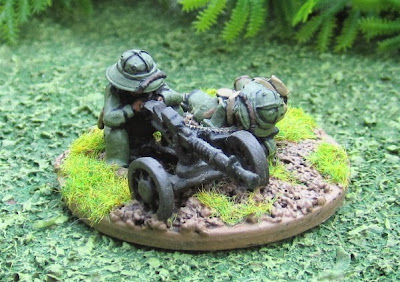 More to come shortly... (the rest of the PAVN/NVA and the VC/NLF)