In addition to getting Getting a whole lot of Feudal Japanese painted, I’ve also taken the upcoming 10th Annual Wargaming Birthday Bash/Winter Wargaming Weekend (less than one week away!!) as an opportunity to make some new terrain. Years ago I started building myself a set of modular terrain tiles. I’ve added a few over the years, but eventually decided I should start afresh.

So I’m going to be making some new tiles – some of them will be ~1’x1’ (30cmx30cm, actually), some will be ~2’x2’ (60cmx60cm), but first I decided to start with some big ‘uns - ~3’x3’ (90cmx90cm). Where possible these will be made to match up with the other modular tiles (roads and rivers will exit at the center of 30cm segments. But they’re really meant to be dedicated “battle boards” for small skirmish games like Ronin – Skirmish Wargames in the Age of the Samurai, which we are playing this weekend, but also for A Song of Blades and Heroes, which I have recently picked up and been obsessing over and has been distracting me from getting in a few more practice games of Ronin!! 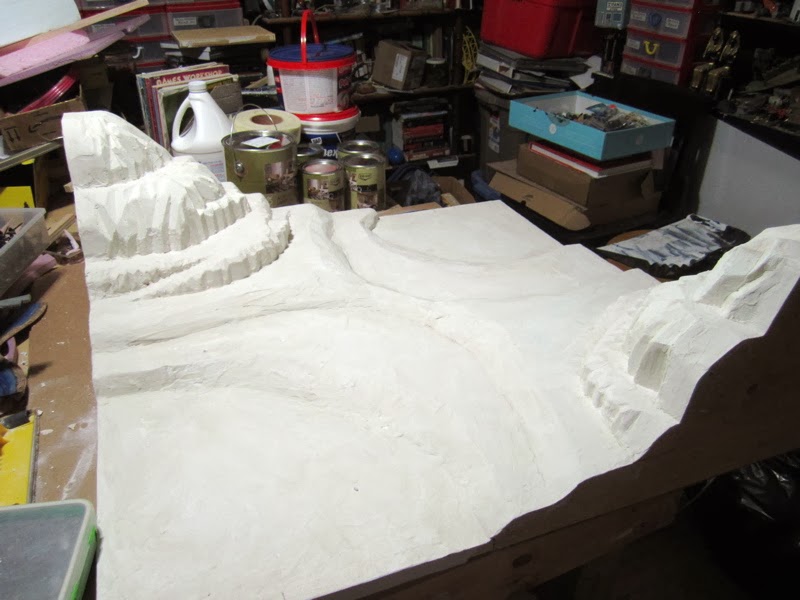 First up we have a few early process pictures. Not that early, I guess… I’ve already built the frame and cut all the polystyrene and covered it all in a coat of goop… There’s some pictures of that action here:

Work Continues on the Pass 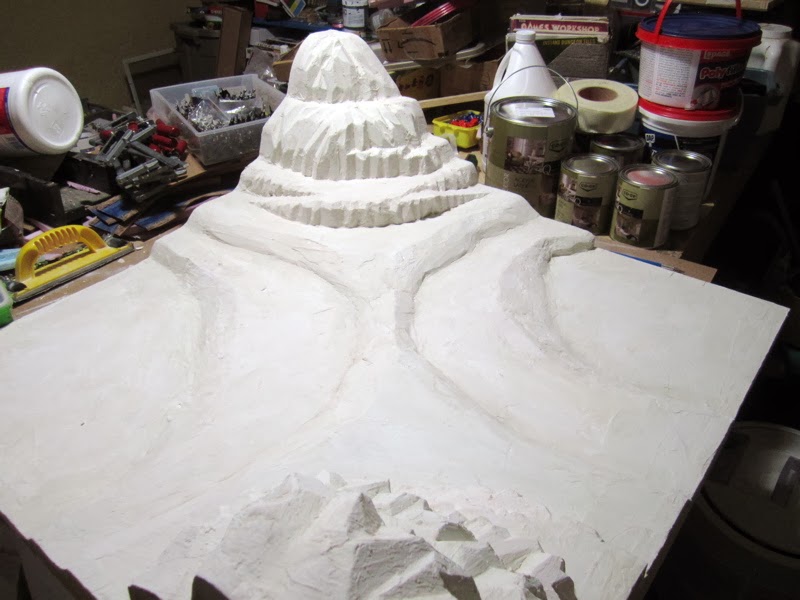 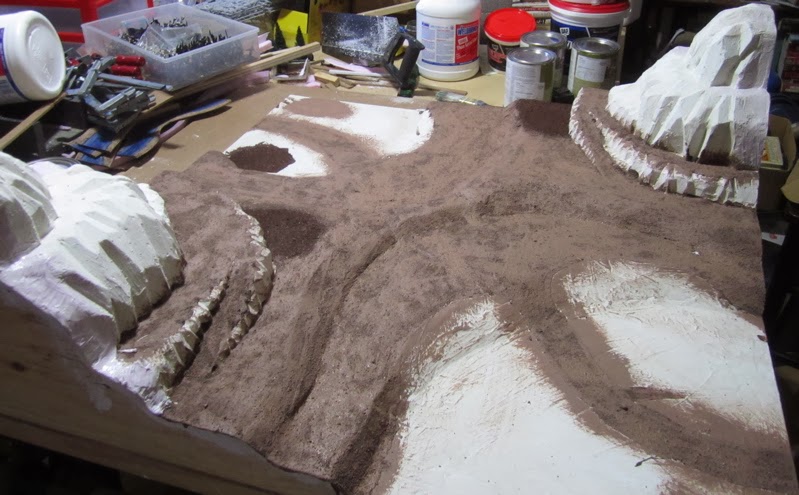 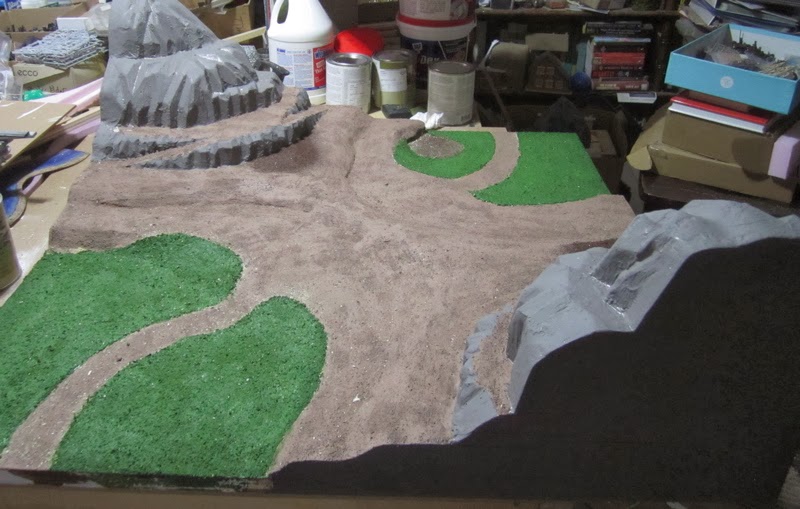 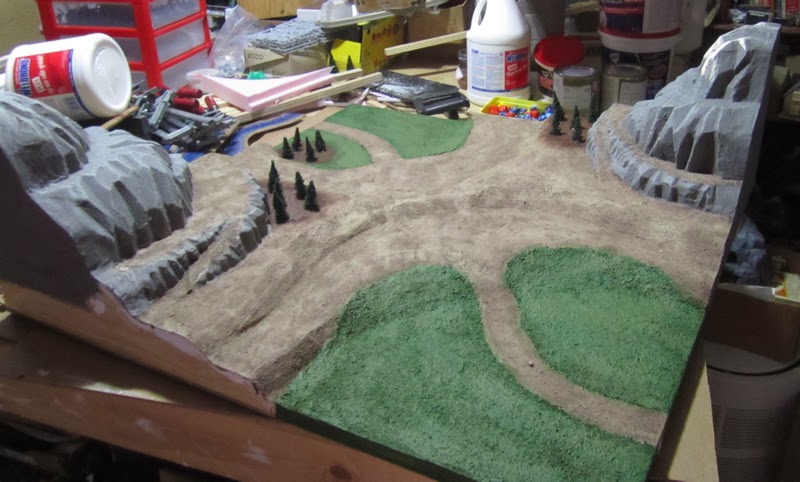 And finally, the finished pass (and the messy, messy hobby table in the background!)! Well, not quite finished – I did another lighter pass of green to highlight the grass a bit more... you’ll see it in the game reports!)

“You shall not pass!” Some monks to give you a sense of the scale. 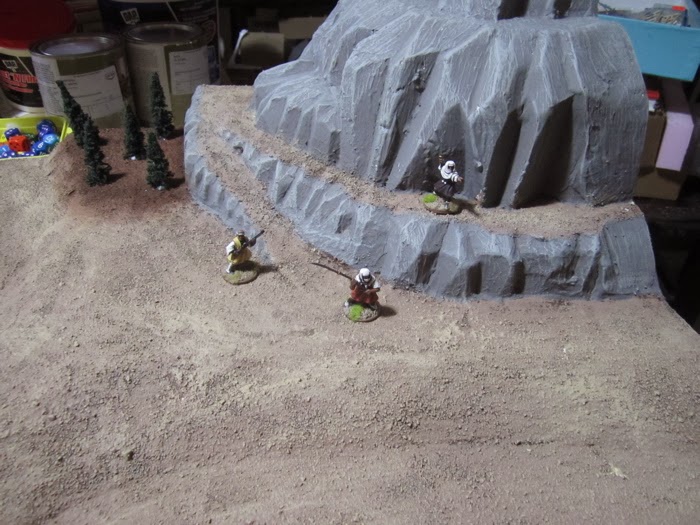 Again with the Monks and the scale of things. 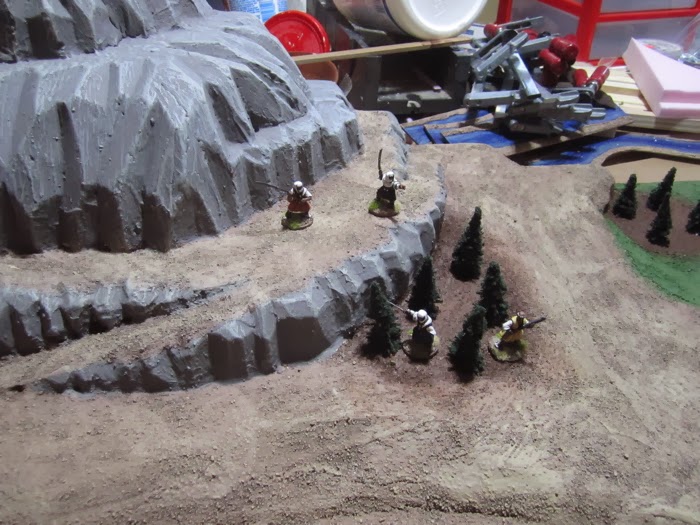 I only had wee small trees left… which look a little funny… but I figured way up in a mountain pass they’re not going to grow all that big anyway, right?

As for scenarios that could be used on this battle board, I figured the standard “Skirmish” and “Capture” scenarios would work… or even the “Duel”? But I was thinking it might be fun to come up with a scenario or two that would be specific to each of the new battle boards.

Both sides have equal sized forces. Attacker starts in one corner, the Defender can set up anywhere from the opposite corner to the height of the pass. The attackers objective would be to exit their force off the opposite corner (any of the board edge that is green). The defenders obviously have to prevent this. I ws thinking the attackers might get 5 VP if they can get half their force off the table by the game end. The defenders would get 5VP if they prevent ANY attackers from getting off the far end of the table.

Ambushed in the Pass

The Defender selects a force of up to 100 points, the Attacker selects a force of up to 150 points. The defender starts within 6” of the center of the table. The Attacker sets up their forces in any of the green areas on either side of the pass. The Attacker has to kill the enemy force (or a specific model? The leader?). The Defender has to survive and exit their force off either corner of the table (any edge that is green). Defender gets 5 VP if they can get 50% (75%?) of their force off the table (or the specific model?). Attacker gets 5 VP if they prevent any of the force from exiting (or for killing the specific model).

I’m not to sure about the specifics of that one just yet. Perhaps the specific model could be a VIP non-combatant? Ideas? Anyone?

I need to get three or four more battle boards done for Friday - the rest won't be nearly so epic as the mountain pass - and hopefully won't take quite so long!

Games reports of more Song of Blades and Heroes game and more terrain (the River Ford!)
Posted by tim at 10:06 AM