I’ve had a few people comment on the various different camouflages I’ve painted on figures, some asking how I do it. I think it would be rather easier just to SHOW you how I do it. Now it would be rather impractical to invite many of you over for a painting night so I thought I’d try doing a “painting tutorial” as a post on my blog.

I thought I’d start with Modern British DPM. I guess I should say “Temperate” DPM – so as to differentiate from Desert DPM. I decided to do DPM first as I’ve done a lot of it, I’m pretty happy with the way it turns out, and I happen to have a few British figures from Mongrel Miniatures on the workbench this week.

When painting any camouflage it’s a good idea to have a REALLY GOOD LOOK at a number of sources. I happen to have acquired a few pieces of DPM kit over the years and nothing beats having a good look at the genuine article. I also have a number of books with good colour pictures. Of course there are innumerable resources available on the Internet. Here’s a few:

Camoflage Uniforms of the World

Now this is by no stretch of the imagination meant to be THE definitive, end-all-be-all, hot to guide… this is just how I happen to paint Modern British figures wearing DPM. Adapt or ignore as you see fit. 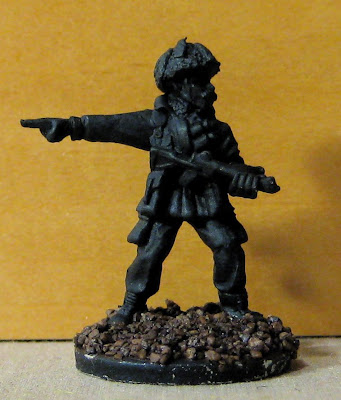 Black. I base coat in black. I do this with all figures. I then paint the areas I want to be painted directly leaving a little black border around everything. I think it helps bring out the detail. I never do any washes, very rarely do any highlighting or dry-brushing.

In an attempt to eliminate the use of aerosols in and around the house I’ve started using black gesso to prime/base-coat my figures recently. It’s a little more tricky and time-consuming, but better that than huge amounts of extra rubbish in the landfill and breathing disorders in my children… 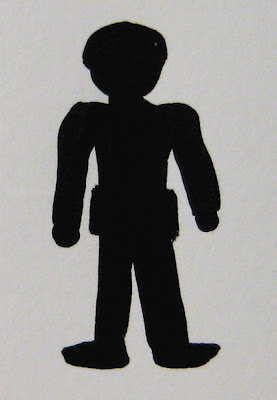 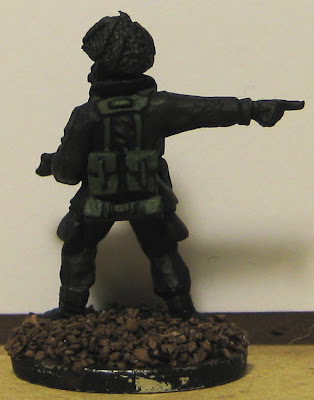 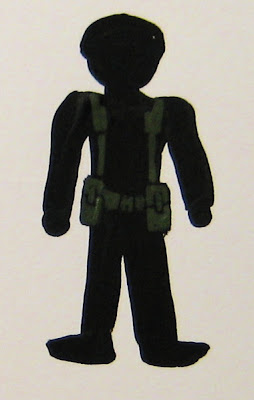 You get the idea… 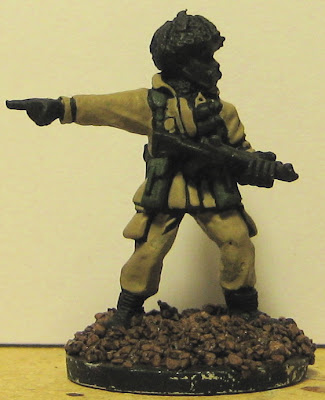 Khaki Base – don’t ask me which GW or Humbrol of Vallego paint it is, I don’t use any of those. I use cheap craft paints from the dollar store or Michaels. In fact the I couldn’t find the right khaki so I just mixed this one. I think it was a mix of Deco Art Crafter’s Acrylic “Tan” and Folk Art Artists Pigment #237 “Fawn”. But there may have been drops of other colours mixed in at one point or another… 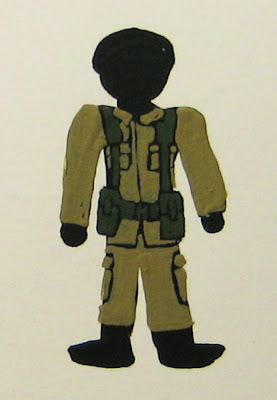 See what I mean about painting up to the edge…? Leaving black outline…? 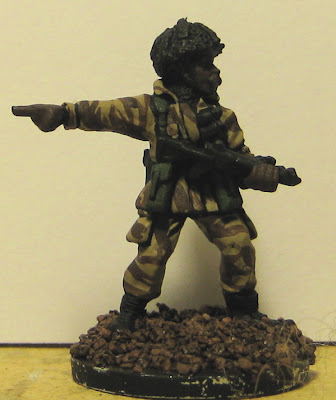 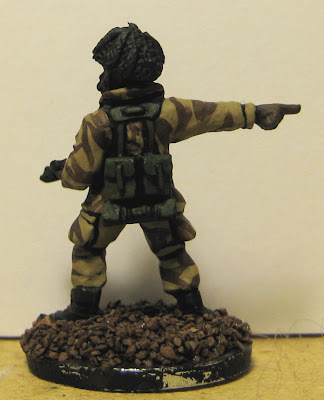 Brown - Here’s where we start making it look like camouflage. I do “swoopy-splotchy” strokes of brown all over (it’s a “burnt umber” of one make or another…). I also use the same brown to under-paint the flesh. 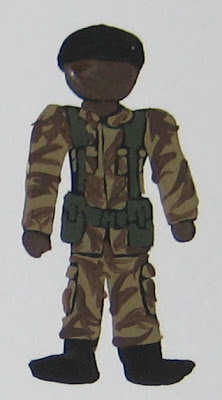 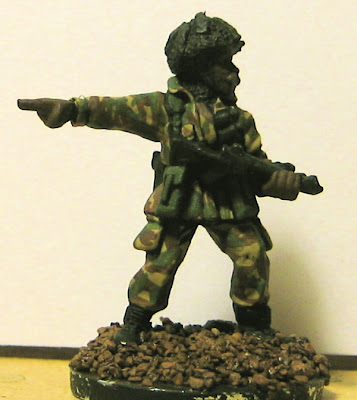 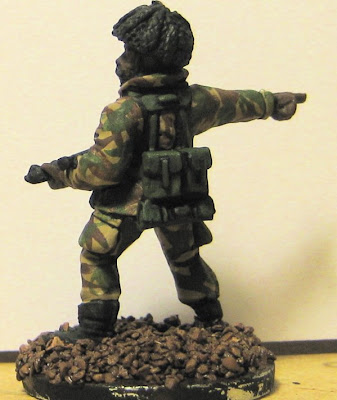 Again with the Green – more “swoopy-splotches” of green. 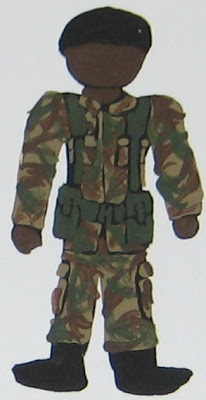 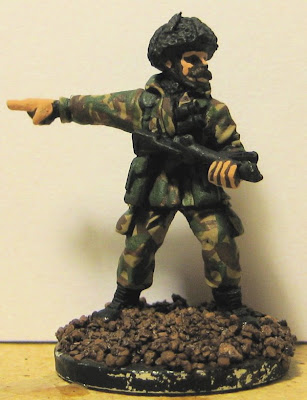 Flesh! - Taking a break from the camouflage bits I paint some flesh. 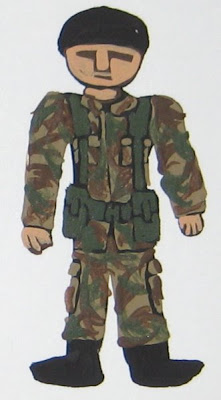 You can kind of see the pattern I use for painting flesh here - nose and forehead, then temples, cheeks and around the mouth. Fingers done individually. This is the only colour I usually undercoat – flesh right on top of black, with the black outlining the fingers and nose just looks a little too… I don’t know… harsh? 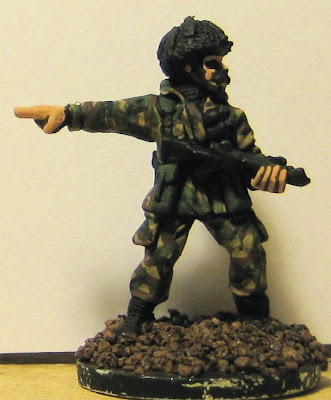 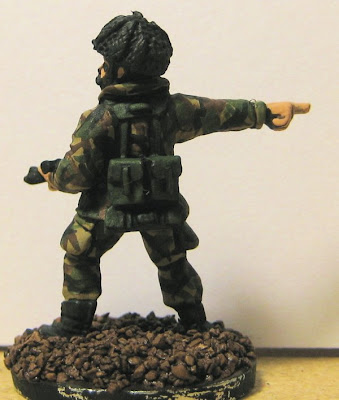 Black – I do thin squiggly lines on the camo, darken the eye sockets, and touch up any important borders that got blobbed on that really need to be defined. 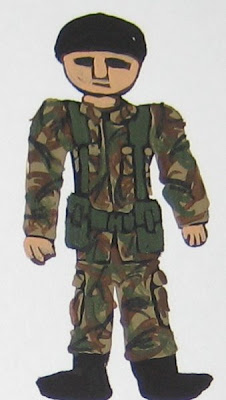 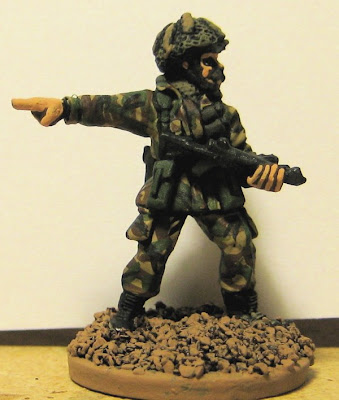 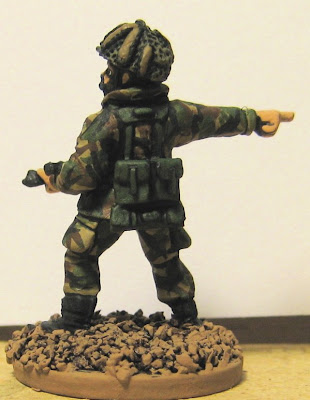 The rest is just finishing up little bits: whites of the eyes and pupils, head gear, weapon, any touch-ups needed… 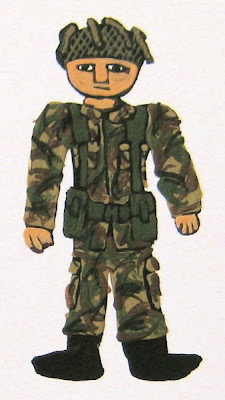 Well that’s about it. this guy just needs some matte varnish finish and some static grass and he’s ready to lead little lead men into action! Hmmmm... I think I'll have to go back and add a couple of watered down green splotches to his face for camo face paint...

Now I'll have to dig out an American to do some Woodland Camo on.

Hope this was helpful. If you have any questions or comments please feel free to post them below!
Posted by tim at 10:05 PM