My Friend Curt was visiting from Regina so I though I’d throw down a little Cold War Commander. Messrs Bertolini and Miller also showed up, so it was quite the crowd!

While 3 Commando of the Canadian Airborne Regiment was engaged as Lutefisk Pass 1 and 2 Commando had been held in reserve. This was mostly because there hadn’t been enough aircraft to lift them as well, at the time. It would only be a couple days later before they too would see action, However.

Soviet Armour has now broken through north of the Stinkefiske Fjord and are pushing southward. NATO forces need time to set up another prepared line of defence further south. The only units available, that are light enough to be quickly moved into place, are two commandos of the Canadian Airborne Regiment and 45 Commando which was just in the process of being ferried across from England.

John decided to take the Canadian Airborne and Curt the Royal Marines. I played all the soviets until Mr. Miller arrived (in the middle of the first turn), then we each took one tank company and one BMP company.

We rolled for Air Superiority; Curt rolled a 6 and I rolled a 2… they had +1, we had a -1… soooooo seven to one… I guess that’d be total Air superiority for the NATO forces… So much for our guys ever showing up and doing anything, thought I…

Aerial Reconnaissance photo from the day before. A Peaceful Norwegian village at the end of a Fjord…

The Canadian Airborne drop zone was a little too far away from where they needed to be… or perhaps they were simply lost in the woods. Neither Commando made it on to the table this turn.

The Royal Marines charged on in true Marine fashion! X Coy heading for the town of Stinkefiske, Y Coy heading around south for cover in the woods to the east. 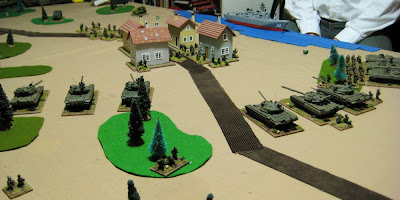 I brought on both Soviet Tank companies on, charging nearly halfway across the table in three moves!! I was starting to think this might be a VERY SHORT game. Of course then my BMPs refused to come on (2nd Company)…. Comrade Millerov arrived on the scene however and drove his motorized rifle company on and debussed them behind some woods north of the village. 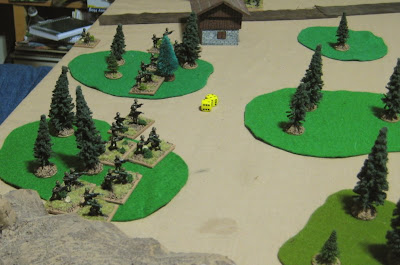 The Canucks finally charged on to the table. All those guys charging towards the flanks of my Tank Company with Carl Gs made me suddenly feel a little uneasy. 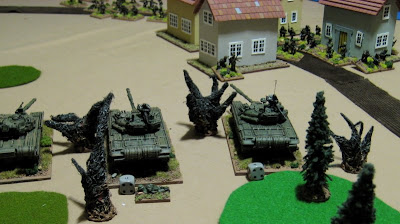 The Forward observation party from the HMS Glamorgan called in fire Danger Close on my 2nd Tank company, Suppressing a platoon of T-72s. Meanwhile, X Coy, 45 Cdo continued their consolidation of the village and started firing Carl Gs at my Tank Company suppressing the other platoon of T-72s 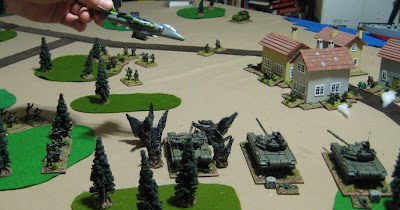 Then, if that wasn’t enough, the Forward Air Controller party called in some Harriers and they utterly destroyed the platoon of T-80s!? 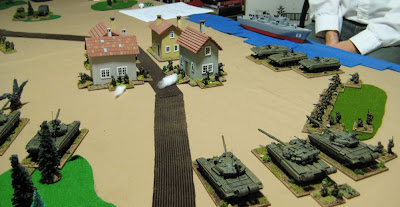 Comrade Millerov brought his 1st Motorized Rifle Company to the front edge of the woods while the BMPs skirted around to the beach and started firing on the Marines in the village. The 2nd Tank Company also joined in. a series of successful ofire orders pummeled the village, knocking out two stand of Marines!

The 2nd Motorized Rifle Company arrived and roared one move on to the field. Luckily they didn’t go any further. They were often more lucky in their failures than in their accomplishments through the game… 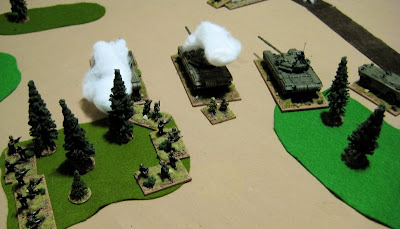 The Canadians continued their charge through the woods. Coming out to the rear of mu 2nd Tank Company they lit them up with Carl Gs, knocking out one platoon.

The Harriers came in again but so wildly off course that the only units under the tamplate were CANDIANS, and quite a few of them! So, they concentrated their attack on one stand, but he lucked out and only took three his, without even being suppressed. Canadians are used to “Friendly Fire” for allied aircraft I guess….

The SBS raiding party that had been hiding in the woods amidst our troops decided to switch from reconnaissance to direct action and suppressed a platoon of T-72s in Millerov’s 1st Company. They then quietly disappeared back into the woods. 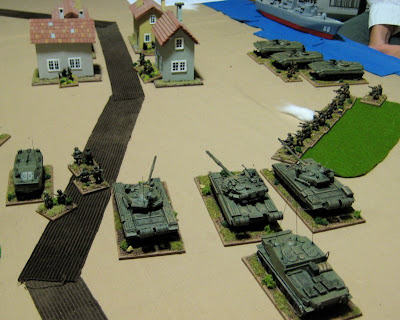 Millerov’s 2nd Tank Company continued to pound the marines in the village, and when the fire from there slackened they started firing on Canadians in the woods. One marine and one Canadian Para stand were knocked out of action. The Motorized Rifles continued to fire but with little effect.

My 2nd Motorized Rifle Company debussed and fired on some Canadians with little effect. 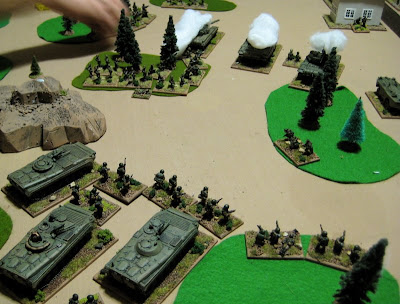 The Canadian Airborne blasted apart the rest of the T-72s in my 2nd Tank Company and consolidated their positions in the woods across from my deploying Motorized Rifles. 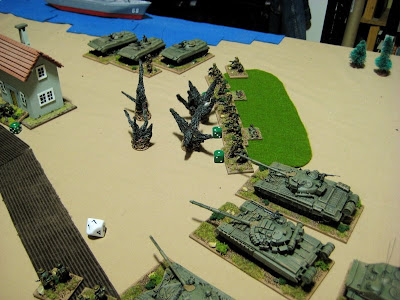 Shelling from the HMS Glamorgan suppressed a few of the Motorized rifle troops from 1st Company. 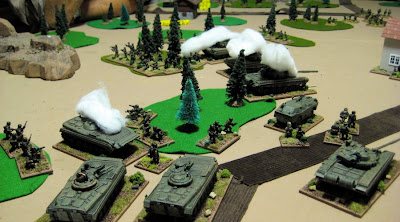 The woods to the front of the 2nd Motorized Rifle Company were obviously thick with Canadians armed to the teeth with AT weapons that would shred their BMPs so they decided to break contact and follow the 1st company which Seemed to be having a bit more success clearing their sector of marines. There were those pesky RMSBS guys hiding in the woods though. Fire on the first order suppressed them, however, on a second order (which ended up being a Command Bonus) the SBS were actually assaulted, over run and passed by… unfortunately in the process a unit of Motor rifles was suppressed out in the open and a unit of BMPs were knocked out..

The 1st Tank company continued to pound X coy knocking out another stand of marines and their Milan Support unit.

The Canadians finished off the Russian Motor Rifle they had suppressed in the open during the assault on the SBS.

Marines attempted to do some maneuvering. 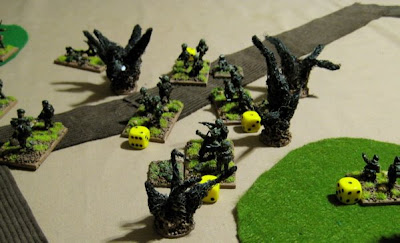 For the first time, the Soviet FAO was actually able to call in some artillery. The timing couldn’t have been better as they caught some Marines out in the open! Four were hit, three were suppressed! 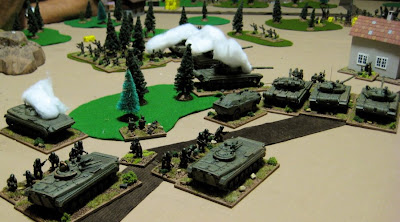 I got the men of the 2nd Motorized Rifle company to their vehicles ready to mount up and follow the 1st company, but failed to issue a second order allowing them to do so. Being a dunce I faced the infantry towards the BMPs they were to mount up in rather than the enemy. I did leave one stand, that didn’t have a BMP to mount up in, in the woods to cover their retreat… 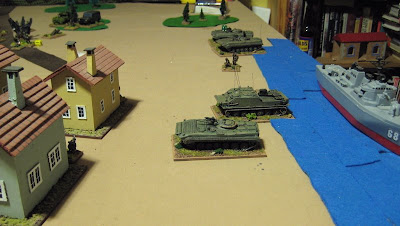 As the fire from the village was almost nonexistent the 1st Motorized Rifle Company mounted up and continued their advance roaring across the rocky beach between the village and the waters of the fjord. 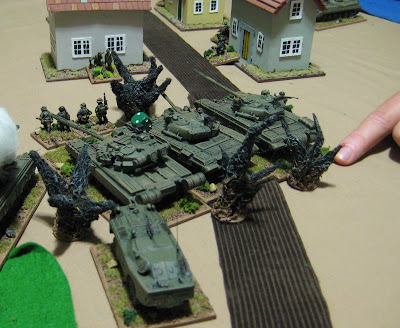 Shelling from the HMS Glamorgan turned on the 1st Tank Company, suppressing the Platoon of T-80s. 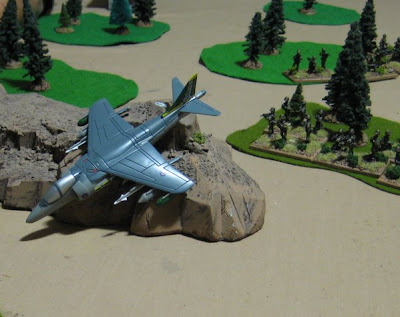 Air support didn’t work out so well… a Command Blunder brought on Enemy Fighters… “Enemy Fighters!?” cried the NATO players “I thought we had TOTAL AIR SUPERIORITY!?” – I guess a flight of MiGs made their ways through the NATO Combat Air Patrols and caught the fight of Harriers laden with bombs… 6 attacks, three hits, no saves, down they went! No more air support for NATO!

Y Coy’s Milan took out a BMP unit along with a couple of Infantry mounted up in it! 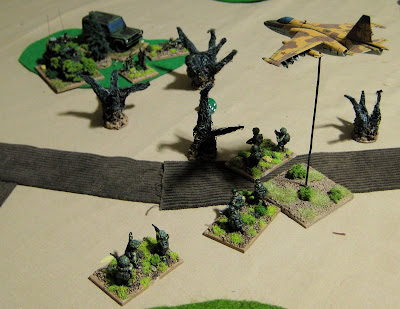 There must have been a tip in the balance of the air war as we were actually able to call in out Frogfoots (at -2 to our pathetic CV or 7…!). Not only did they appear but they also made it through the gauntlet of NATO interceptor aircraft and AA fire and blew Y Coy’s Milan support to smithereens! BOO-YAH!! 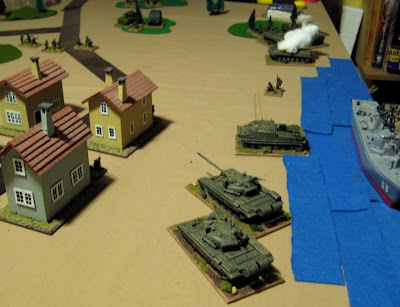 The Unsuppressed T-7s of the 1st Tank Company followed the BMPs along the beach. 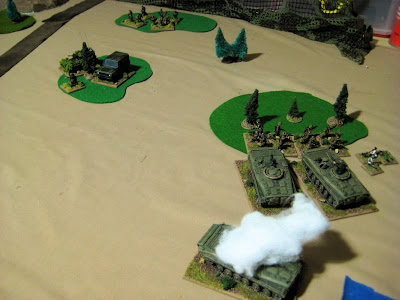 I gave Comrade Millerov some wrong information about the scenario. I was under the impression that we had to get 50% of our force off the table to secure our Major Objective…. In actuality we only had to get 25% (6 units) - which he could have just about done this turn.. having 2 BMPs and 4 infantry units right there ready to do so. Such is the fog of war… he decided to debus again and provide some fire support for the tanks and my company to follow him up…

The 2nd Motorized Rifle Company failed to do anything this turn, however… but that was sort of a good thing. 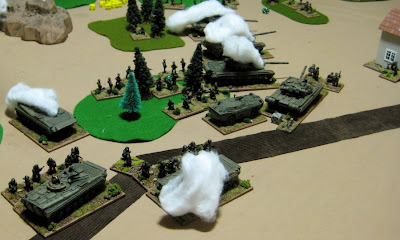 Canadians charged through the woods wiping out my infantry picket, and firing on the rear of the T-80 platoon, suppressing it again. Lit up one of my BMPs … So glad I hadn’t got into them… 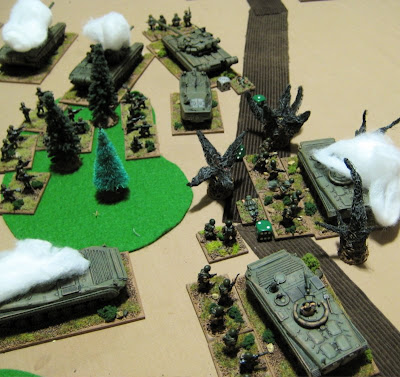 Fire from the HMS Glamorgan suppressed on of my infantry as well. 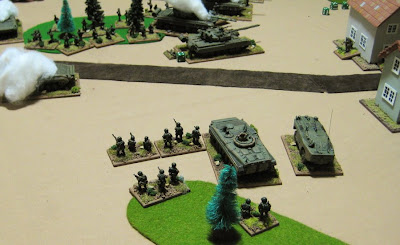 The tanks of the 1st Tank Company rolled up to the 1st Motorized Rifle Company’s position and fired on the Scorpions of the 1st Sqn Household Cavalry, which had been harassing the BMPs the previous move.

The Canucks finished off the T-80 platoon.

We called it a night at this point - it was damn past twelve. It was a long game, but there had been much catching up and B.S.ing and looking up of rules that I had forgotten, not having played in some time. I’m sure John and Curt were convinced I was just making shit up as I went “remembering” rules and such…

We called it a NATO Minor Victory. They did achieve a Minor Objective (causing 25% casualties). The Soviets could have achieved a Major Objective (exiting 25% of the force) if I hadn’t gotten screwed up the victory conditions and given Comrade Millerov such bad advice. If Comrade Brownovich lives to see next week, he’ll probably be sent to Siberia.

I had a lot of fun and it really went back and forth a couple times. Both sides had some abysmal luck; Curt, in the first six turns rolled five command blunders!?
Posted by tim at 1:32 PM