This is the third scenario in Skirmish Campaigns Screaming Eagles at Hamburger Hill. I had planned on holding off on playing it for a week or two to give me a chance to crank out some more appropriate looking terrain (a couple of sandbag bunkers and mortar pits), but then decided to just play it with whatever I had that I could BS my way through with – as I probably wouldn’t get to making the terrain this week anyway. Unfortunately this was a last minute decision so I really hadn’t read through the scenario and thought much about how to translate some of the special situations in the scenario into Savage Worlds… So I ended up leaving a lot of stuff out and BSing my way through, changing rules as I went…

Elements of the 6th PAVN Regiment and the K-12 Sapper battalion attempt to over run Fire Support Base Airborne.

US Forces- Control all of the structures at the end of the game – whether they have been “destroyed” or not.

PAVN Forces – Destroy 5 of the 6 structures. 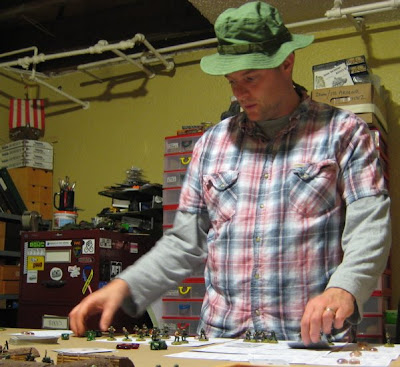 Christian showed up and played the Americans. He had been reading the battle reports and decided he should play the Americans because “it was about time they won…” 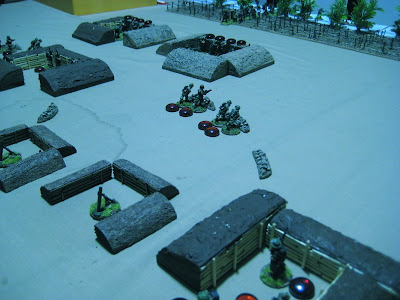 Sentries at Firebase Airborne sit peacefully in their bunkers and foxholes blissfully unaware that their enemy approaches.

The PAVN Sapper Penatration team cuts a gap in the wire. The follow on forces waiting in the wings to surge into the base.

Unfortunately the grenadier in Fireteam A of First Squad – just happen to be looking out of the bunker he was posted in and saw something move out in the wire.

Being the crack shot that he is he landed a 40mm grenade from his M79 right in the bunch of them and knocked out six of my sappers before they even got into the compound! 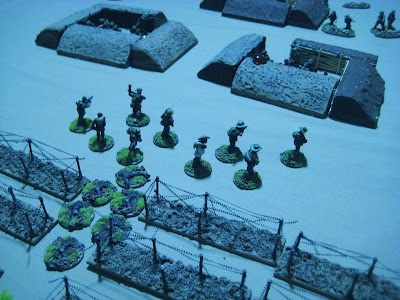 Sappers surge into the firebase! 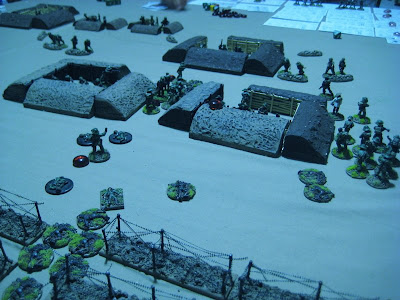 PAVN run amok between the bunkers… While they didn’t get any demolition charges into the bunkers they did toss in a few grenades, which took a toll! Strangely one guy in the 1st squad bunker slept clear on through until turn four (all US forces started the game “shaken” as they weren’t expecting the attack at all) despite all the shooting and the squad leader standing next to him yelling (Command edge) – he was the only one untouched by the grenade going off in the bunker. After it went off he finally woke up! 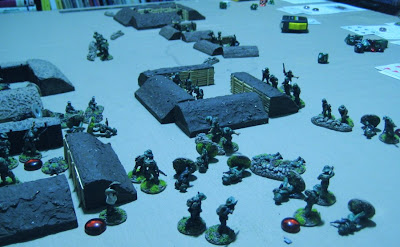 Carnage everywhere. The game ended at turn six as there were no PAVN left fighting.

US Forces:
0x KIA
3x Seriously Wounded (cases that would require immediate evacuation to a full field hospital in the rear, or perhaps even to Japan – they would be out of action for some time, if not right out of the war)
5x Lightly Wounded (cases that would probably be evacuated as far as a field dressing station and likely be out of action for a day or two)
1x Walk Away (this guy wasn’t even evacuated – I think it was a grenade casualty so the concussion from the grenade probably knocked him right out, but miraculously didn’t even leave him with a scratch!?)

As for Victory Points

US
+5 for controlling all structures at the end of the game and +35 for enemy taken out of action…. So 40!?

PAVN
+9 for enemy taken out of action

I think that would constitute a “staggering victory” for the Americans!

This ends the first “Campaign Arc” “The Approach” in teams of victories the PAVN have two and the US one. If you total the victory points over the three scenarios we’re looking at: US=56, PAVN=37…

Good Fun. Next week’s scenario: A Hard Day for Charlie Company.
Posted by tim at 10:13 PM