I FINALLY got in a game of Galleys & Galleons this afternoon – a new game under development from Nic Wright and Ganesha Games. (Sorry Nic)!! Hopefully now that I’ve got it on the table and played a game (and all the kids activities are wrapping up for the year!) I should be able to get in a bunch more games over the Holidaze!

Tuesday afternoons we usually play some board games with some other homeschoolificators – but this week I decided to introduce the two that were able to make it this week to miniature gaming! So, while my kids have played lots of miniature games (and a lot of Ganesha Games) , two of the players, not only had no experience with the Ganesha Games/Song of Rules, They had never even played a miniatures game before – so this would be a real test of the system! As it turned out everyone, more or less, picked it up straight away and we were all off sailing, as it were.

The crew of the Red Snapper heard tell of a Spanish merchant ship, heavily laden with New World Gold would soon be heading home to Europe – enlisting the aid of the Snow – an English privateer – they endeavored to take the Merchantman down and share out the booty. The laid in wait, in the lee of some smallish islands in the carribean await the Spanish gold ship to lumber past on it’s way out into the open sea.

Pirates and privateers set up within one medium of the east end of the table. Their objective was to take the Merchantman intact – gold’s no good at the bottom of the sea.

Spanish Gold ship and escort set up within one medium of the West table edge. Their objective was for the Merchantman to safely make it off the east edge of the table.

Wind started out of the north. 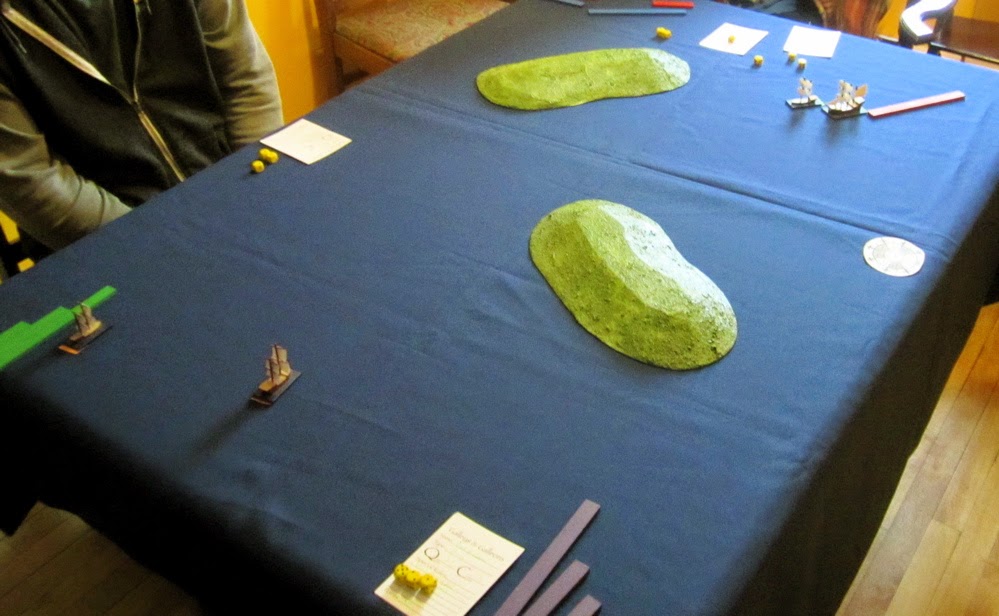 Initial setup from the North East. On the bottom left of the picture are the Pirates. On the top right are the Spaniards

Everyone went straight ahead. 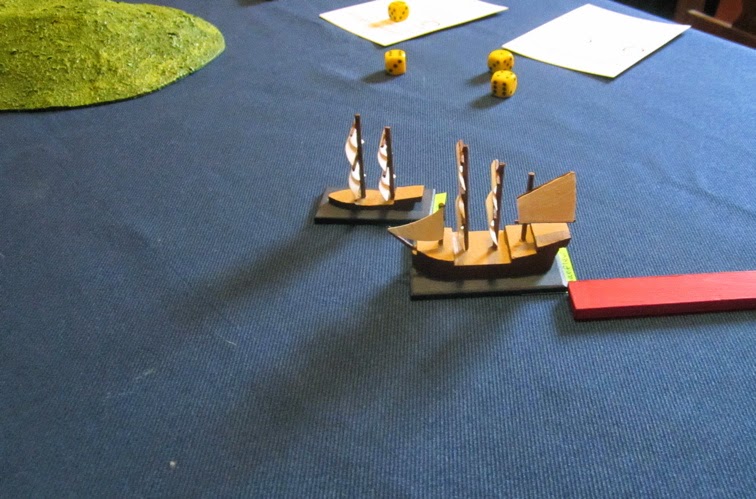 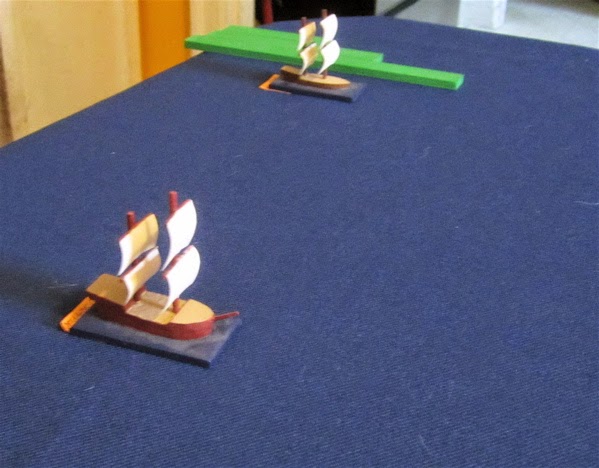 The Pirates sail towards their quarry. 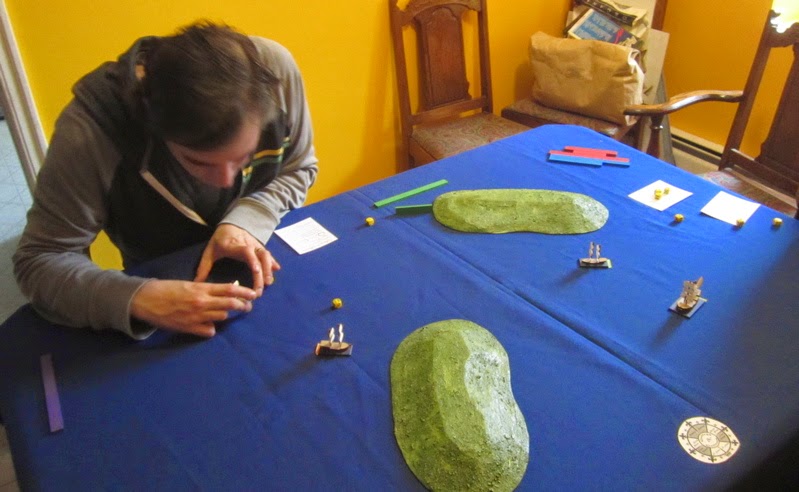 The Harfleur, seeing the pirates rushing towards them thorugh the gap between the islands turned to skirt around the north end of the Islands. The Red Snapper saw this maneuver and began turning about. The Snow also made to come about.

The Harfleur slowed as it turned into the wind a bit. 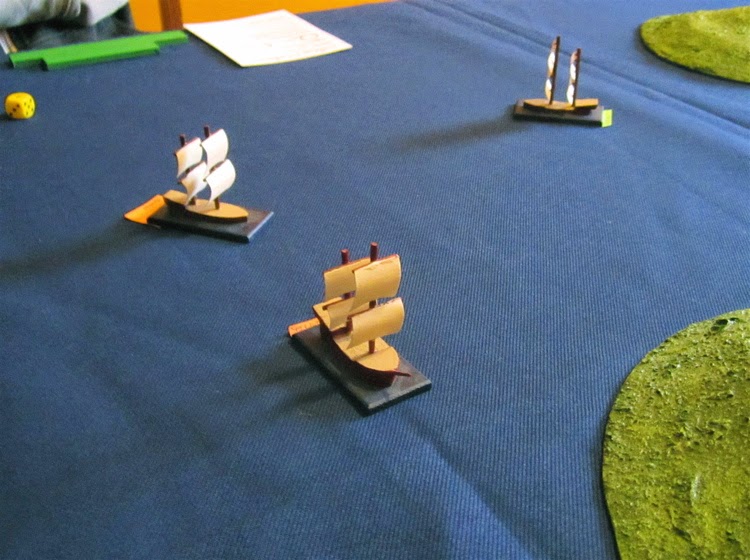 The Red Snapper, coming about, strayed into the shallows around the island, but safely navigated their way around any rocks there might have been there.

The Snow rolled two failures – a double One which shifted the wind direction.

The Rapier ALSO rolled two failures - with a double one – shifting the wind a bit more. I think the change in wind made the Harfleur pick up speed and it almost sailed off the table edge – not being able to maneuver (as the Rapier had rolled a turn-over before it could activate and change course!) 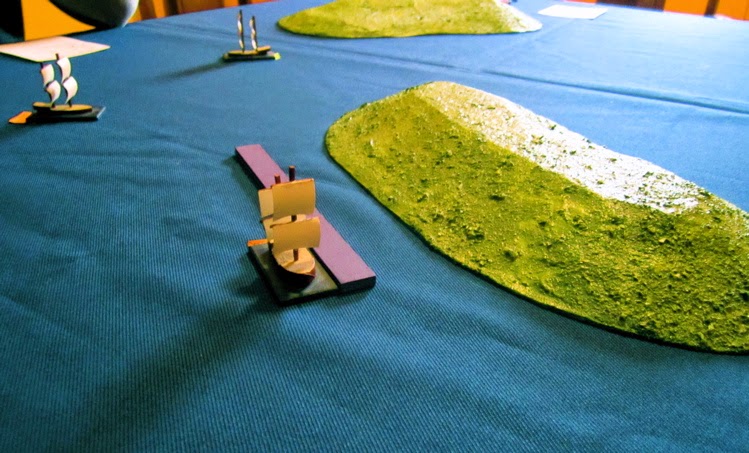 The Red Snapper also picked up speed and so it went tearing through the shallows by the island and sustained TWO DAMAGE due to hitting rocks and whatnot.

The Rapier fired on the snow – hits, but with no appreciable affect.

The Red Snapper decided to try and repair some damage, but in the process failed to slow the speed of their ship and sustained MORE damage on rocks in the shallows!?

The Snow returned fire on the Rapier – which was equally ineffective and then sailed on past – trying to sail about the island and give chase to the Harfleur. 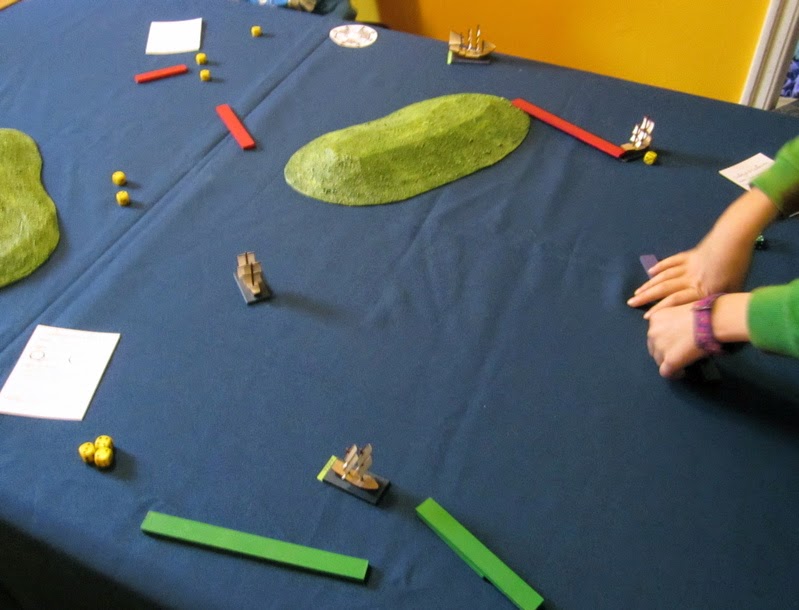 The Harfleur… a merchantman… fired it’s bow chasers… at the Red Snapper at the very end of a second long stick… causing no damage at all (surprising no one…).

The Rapier started to come about.

The Red Snapper scored a success and a failure – but not JUST a failure – rolled a one on a coloured die and had to make an “All At Sea” roll – which in the end made her fire on the Harfleur – which she’d been planning to do anyway! No effect.

The Harfleur turned a bit with it’s single action – the two fouble fail rolls turned the wind even further.

The Rapier could only said straight ahead – not being able to activate. 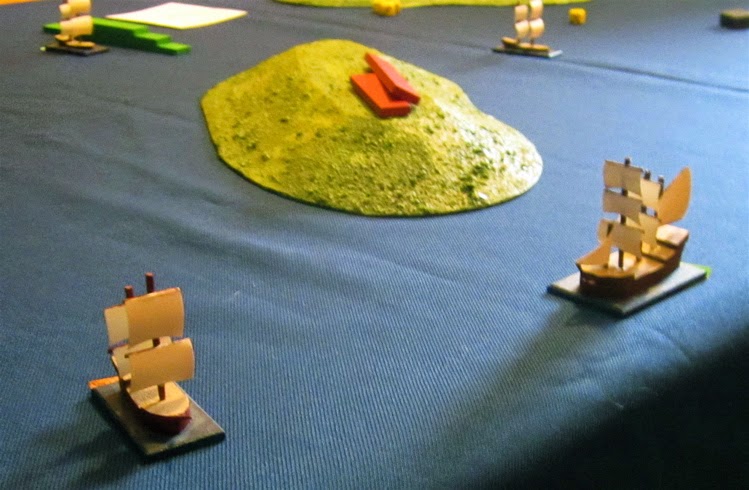 The Snapper rolled another two fails – including another one on a coloured die – the result was that they were to strike their colours and surrender. We figured it was more likely that they’d just sail on by and make for cover hoping the Indiaman made a run for it out to sea and not stick around to rake them up the stern!

Given the speed of the Snapper – it would likely have sailed off the table edge that turn anyway.

So the only actual damage done to any ships was due to hitting rocks or reefs in the shallows around the Island... Well, we got to practice moving the little ships about... and we've pretty much got that down. NEXT game we'll get down to some serious gunnery and boarding actions.

I like the game so far. Definitely looking forward to having another go. It definitely has the right feel for a naval game in the age of sail – but still has the uncomplicated, streamlined, fast-play of other Ganesha products.

I think the only real problems were caused by my placement of the islands in the middle of the table – which turned out to be just way too big for such a small table and made it hard to ships to maneuver around them without accidentally sailing off the edge of the table. Probably tried too ambitious a scenario for the first time around – should have just had some open sea and said, “there they are, go sink ‘em!”

Well now that the kids have had a taste of that salty sea air we’ll be have a few more game reports to post! Ya-HARRRR!

I also have some Great War stuff I’m just finishing up.
Posted by tim at 5:35 PM