I have to admit I’ve been a fan of military role-playing games for a long time. I’m not saying they are the “best” or even my personal favourites – just saying I like them. I have very fond memories of playing Twilight: 2000, Traveller: Mercenary, Revised Recon, Behind Enemy Lines and Battletech: Mechwarrior in high school – and many of our Top Secret games were more “Special Ops” missions that “Spying”, per se... In more recent times I’ve run Tour of Darkness and Weird War Two campaigns with Savage Worlds, I even ran a Call of Cthulhu game set during the Great War where the characters were members of the Canadian Expeditionary Force.

I don’t know what it is about them… perhaps it’s because I’m interested in military history… perhaps it’s because it’s easy to set up a plot train when the characters are part of a military chain of command – “Here is your mission… go do it!”… Perhaps a bit of both.  Oh and (as a miniature wargamer) I’ve always had this megalomanic dream of running a military role-playing game where the players would start as grunts and work their way up to being the platoon/section commanders – at which point the engagements become skirmish wargames - then maybe after more campaigning they could even take command of companies and/or become part of a battalion’s staff – and then the combat engagements become another game entirely (possibly using Blitzkrieg/Cold War/Future War Commander)

I don’t even now how I started collecting up these things… Actually I do know the Void stuff I originally picked up from the bargan bin at the Dragon’s Den and I think I picked up a few odd Imperial Guard in lots off ebay. I looked into picking up a few more after I got  Rogue Trader and even more after picking up Only War last year. More recently I scrounged up a copy of an old Imperial Guard codex to see how the guard is theoretically organized – so I could organize this growing force of Imperial Guard that I seemed to be acquiring.

It’ll be awhile before I ever get around to running either Rogue Trader or Only War – but I got looking at these guys again after I picked up a few more Only War books during the annual Fantasy Flight Games Black Friday/Xmas Sale. I found I had a number of half painted guys (probably form last winter when I picked up the last batch of books/minis) and decided I should at least finish them off… then looking at the organization I realized I was one or two figure from finishing off a platoon – so I finished up a few more…

Assorted Imperial Guard (and proxies) I painted over the last week.

These are (mostly) old I-Kore Void Viridian Commandoes (the fellow with the flamer is a Kryomek trooper). As I mentioned I’d originally picked up a few out of bargain bin for $1/pack – I’d originally planned to just use them as generic sci-fi military dudes, but then realized they’d make pretty good proxies at Imperial Guard Catachans. This particular lot I picked up off ebay to finish off a couple of squads of them (see the complete squads below)

These are some monks from Black Tree Design that I tried converting (with some gen-u-ine GW guard bitz) to use as Ministorium Priests of the Ecclesiarchy (I hope GW doesn’t sue).

Adding these guys to troops I already have I end up with:

Blast! I’m TWO GUYS short of a (rather understrength) platoon of proxies (the platoon HQ should have two more guys in it…). 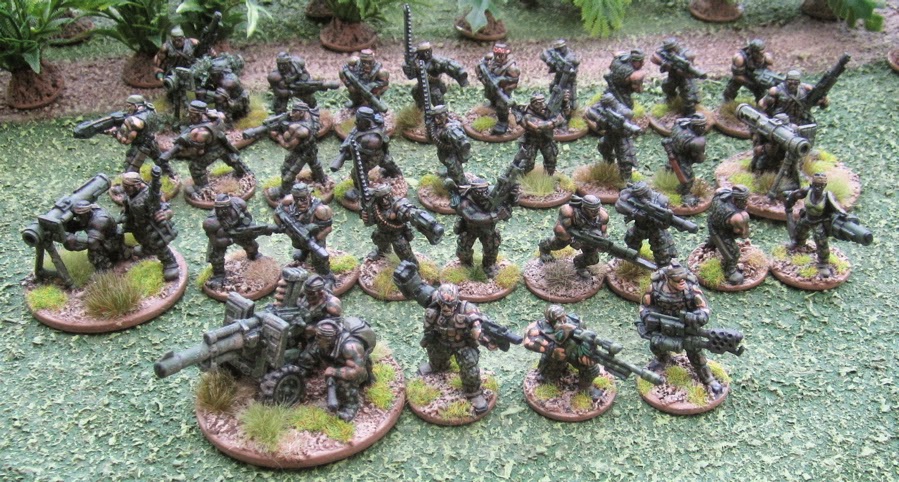 A few of the new guys allowed me to finish up a complete platoon of Catachan Imperial Guard.

The three older Ogryn I’ve just finished up look like little kids next to the other newer (but previously painted) Ogryn I have. I guess I’ll call him the Bone’ead of this attached Abhuman squad. Two of these guys came with goofy helmets with horns(!?) so I added a plastic GW Warhammer Fantasy ogre head to one and the other I just carved off the offending helmet and added a beret made of Green Stuff. Teh head swap looks pretty cool, the beret conversion... well.. it's not my best conversion ever - but it's better than the silly horned helmet!

These are some of the other guys I just finished that will become part of some other platoon’s command sections (or something).

I also have a Company Command section and another attatched abhuman section of Ratling snipers - which are already painted. I have enough figures to make a second complete three-infantry-squad all GW Catachan platoon (as the one above) and another Platoon HQ, an infantry squad, a Heavy Weapons squad (three heavy bolters), and a smattering of additional light support weapons (flamers, plasma guns, melta guns snipers, and SIX guys with demolition chargers!?) I’m not sure what to do with them – perhaps organize them into special weapon squads? I have a batch of old Rogue Trader Era guardsmen that I thought I could use as a Veteran Squad. Oh, and a Scout Sentinal Troop….

Oh, and that’s just the Catachans… (I’ve acquired a smattering of Tallarn and Cadians – about a platoon of each)

(Oh, and then there’s the three 1/48 WW2 KV-2 tanks I picked up – along with a few GW bitz – to convert into a squad of Guard Ragnarok tanks – anybody remember those from Epic?)

I’m done with these for now though…

I have some Irish Wolfhounds that I’m just finishing up on the workbench and a few other odd and sundry items.

We’ve been playing a LOT of boardgames this past week – perhaps I’ll post about that as well…
Posted by tim at 11:02 AM