I had an extremely productive day yesterday and almost have another unit completed for Lion Rampant. This unit happens to have a standard bearer. It’s been a good long time since I last made a flag – and an even longer time since I did a How-To/Painting Tutorial post (and they always seem to be popular… and the flag I was planning seemed like a quick and simple enough one… so here it is – this is how I make flags. It’s not the only way… I’m not even suggesting it’s the best way… it’s just the way I do it. Take what you will from it, discard the rest. 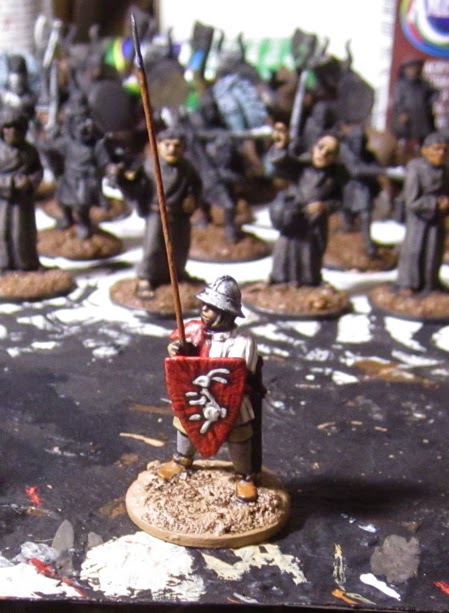 There he is, the standard bearer himself. 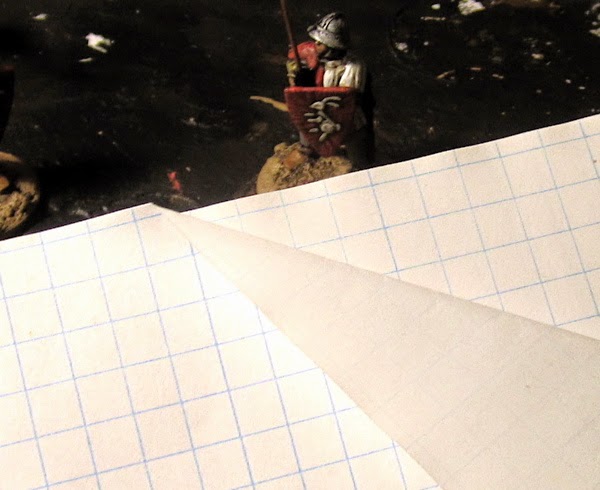 I use standard quarter inch ruled graph paper from a pad. I use the pad stuff (ass opposed to stuff from a graph notebook or loose pages) because on the pads the lines are only printed on one side! The lines are dark enough to bee seen through to the other side – to easily use as guidelines – but not dark enough that they will be seen through paint when the painting is done on the back (non-lined) side. 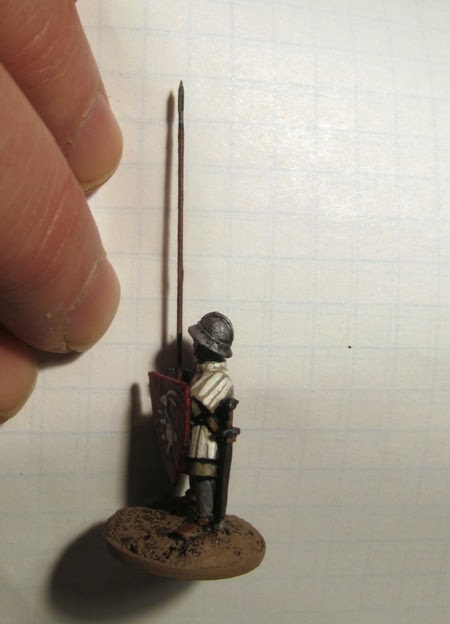 First I measure or just set the figure down on the page to see approximately how big of a flag I’m going to be able to make. Looks like I can do an 1 ¼ inch flage here. 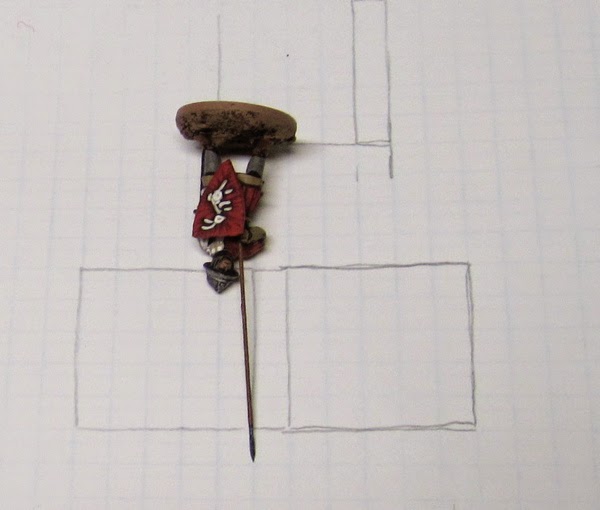 Leave a quarter inch gap between the two flag field faces for wrapping around the pole – probably more than is necessary for most things you’d use as a pole – but better to have too much than not enough.

Here is where I would mark out geometric shapes – but this is a very simple flag I’m working on today – one colour with a devise in the top corner or maybe center. I hadn’t really decided as I was starting. Perhaps it would have been better to do this when I was making flags for some Seven years War or Napoleonic troops with more interesting/elaborate standards… but I’m not painting those today. Perhaps I’ll do another some day when I get back to those periods…? 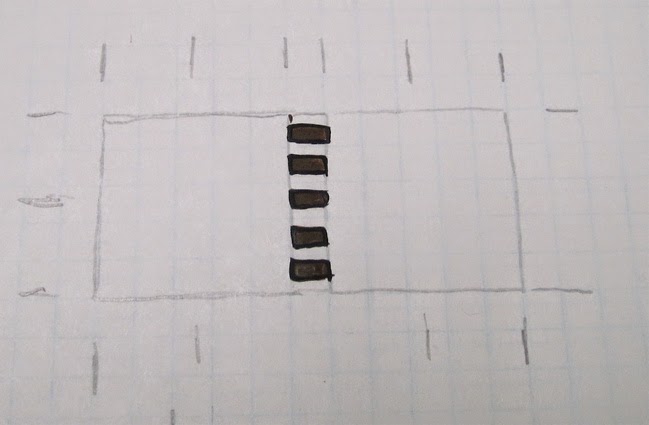 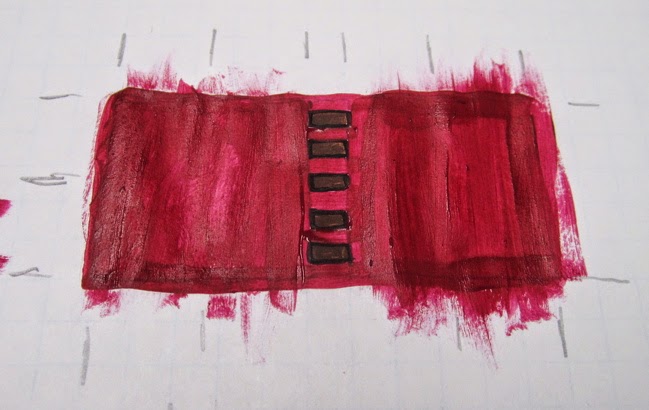 Dark red as background to the main field. The red I use is Decoart Americana Napa Red – it’s fairly translucent – which is okay when painting over a black primed figure, but painting on white paper it’s going to need two coats. 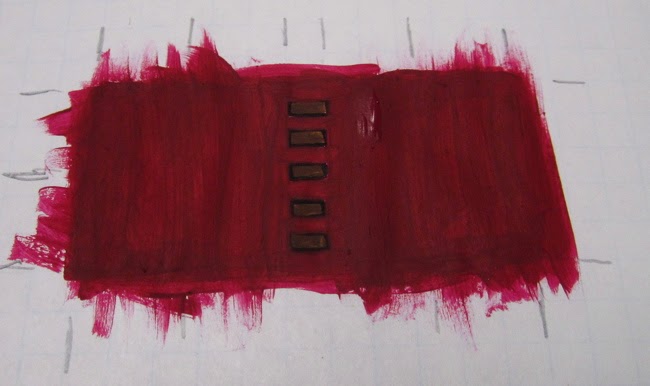 Second coat. probably could have done with a third... but I am lazy...

Yes I paint way outside the lines on the outer edges that will be cut – it doesn’t matter – it’s going to be cut off and better to overshoot those lines than be a shade short and have white bits showing on the coloured field when you’ve cut it out! 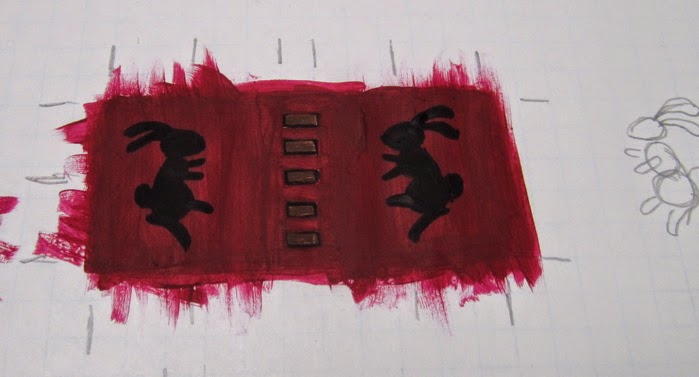 Next I did the outline of the device in black.  I kind of just eyeball it and paint it freehand – other than RIGHT NOW, no one is ever going to see both sides of the flag at once and so won’t be able to tell if it doesn’t line up just perfectly. Also if it does look a little wonky it doesn’t really matter as when I bend it to make it look like it’s flapping in the wind - everything will get visually distorted anyway. I’m going for a “general effect” – so that when someone looks at it on the tabletop they will be able to recognize that it is a flag and be able to tell which side it is on and maybe be able to quickly make out a few details to tell which unit it is (especially if in an army with uniforms that are otherwise not easy to tell apart) 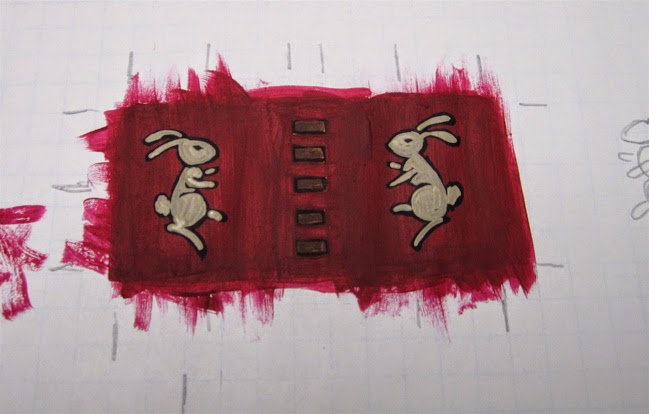 Then on top of that the base colour for the device. 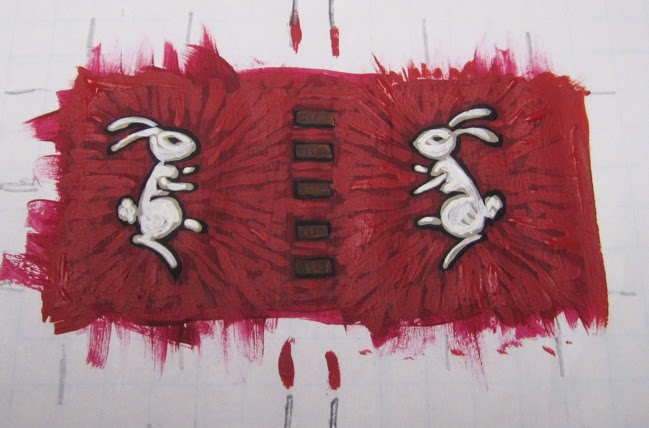 Then highlight colours for field and device. I have just painted sections one colour - but I prefer to do it with a deeper background colour and a highlight colour as I find it gives the finished flag a bit more movement and dynamism.

This is, more or less, the same process I use for painting shields - only on a slightly grander scale. 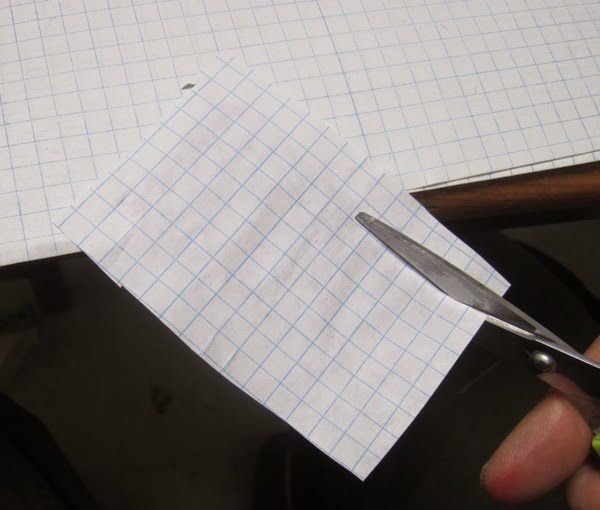 This was exceptionally hard to take a picture of as normally I am using two hands to do this – one to hold the paper, the other holding the scissors… I ended up having to prop it on the edge of the table and take the picture holding the camera in my left hand – and trying to hold is super steady as the lighting in the basement was not exactly ideal and the shutter speed was about 1/25 or 1/30!? I had a similar problem a few of the next few shots as well – normally I’d be holding the miniature with one hand, painting (or whatever) with the other… but hopefully you get the idea of what is going on here. 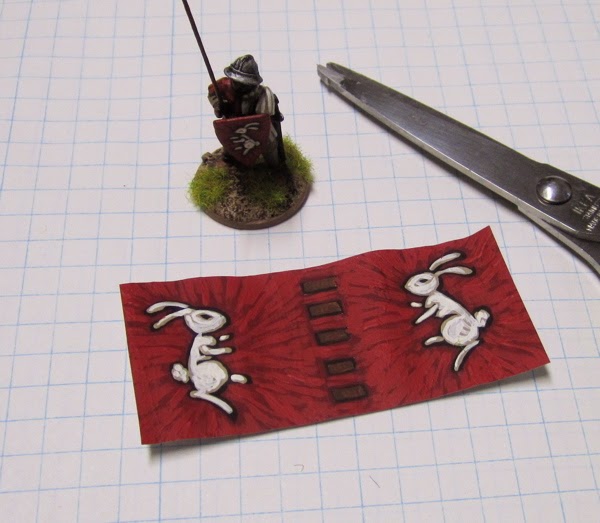 All cut out and ready to be mounted on the figure! 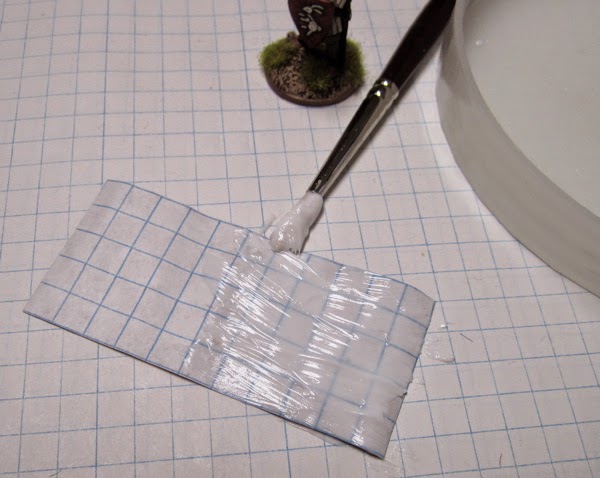 Slather one side with white glue or acrylic gel. I prefer the gel, but I've used both. 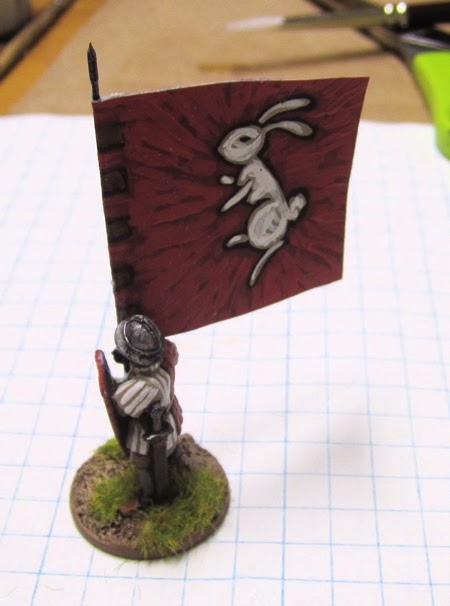 Carefully wrap around making sure all corners match up - and wiping off any excess glue or gel that squishes out the sides (this is where a matte acrylic gel makes things easier - you can just use a brush and spread it over the flag). I also kind of pinch the flag together at the pole so it wraps tightly around at the pole. 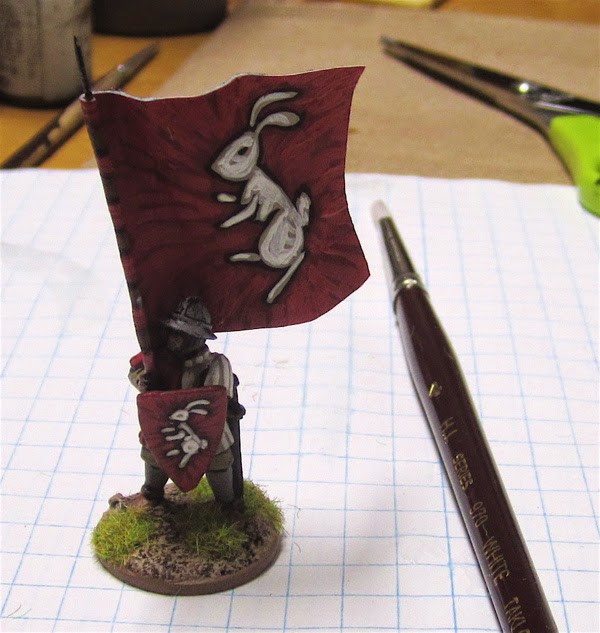 Once that is done, shape the flag to look like it’s flapping in the wind!

Once it’s dry I have a good look at it and if there’s areas where the two sides of the paper didn’t match up quite right I carefully trim it with some smallish scissors – this one happened to turn out pretty good so I didn’t have to try and take any pictures of that maneuver which surely would have exploded my brain!? 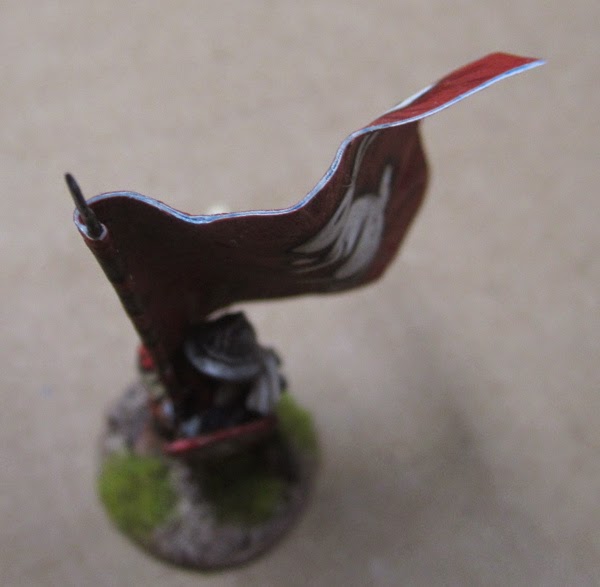 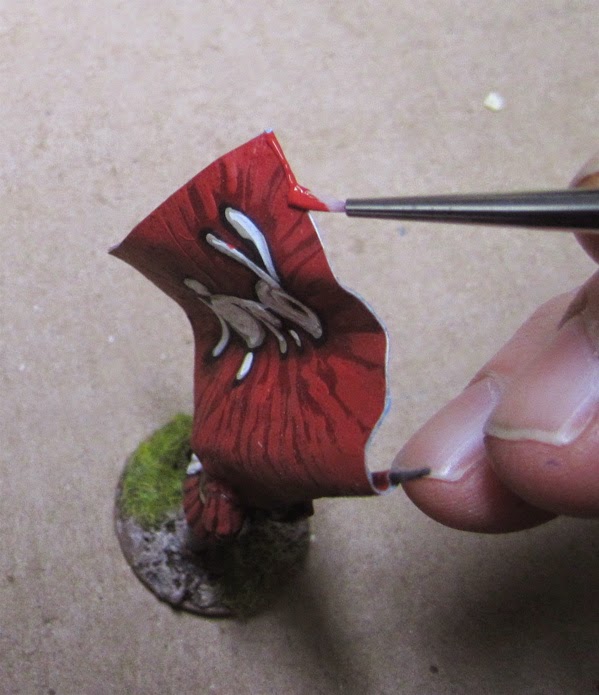 …so I just touch up the edges with whichever field colour is appropriate – luckily here the entire banner is one colour so there was no delicate fiddling involved. I don’t leave a huge bead of paint on the flag – like the one you can see in the picture above – that was subsequently spread smooth on the flag. I also, at this point, touch up any of the highlight colours to make them brighter in parts that are on th outer sides of the folds – if necessary. 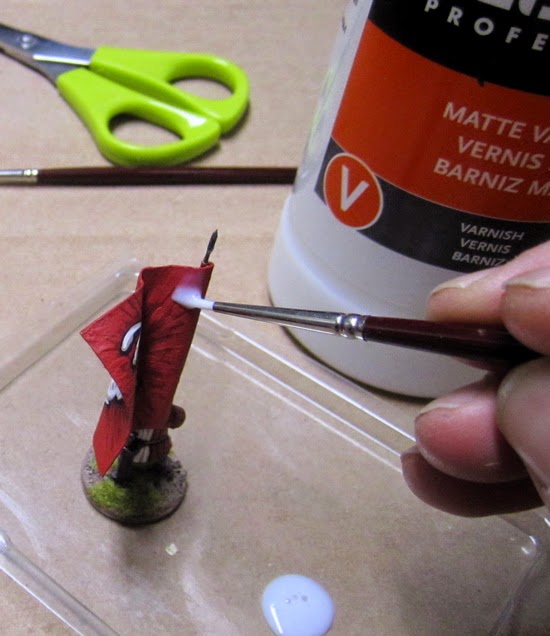 Once it’s good an thoroughly dry I give it a coat of the same brush on varnish I paint on the figures. 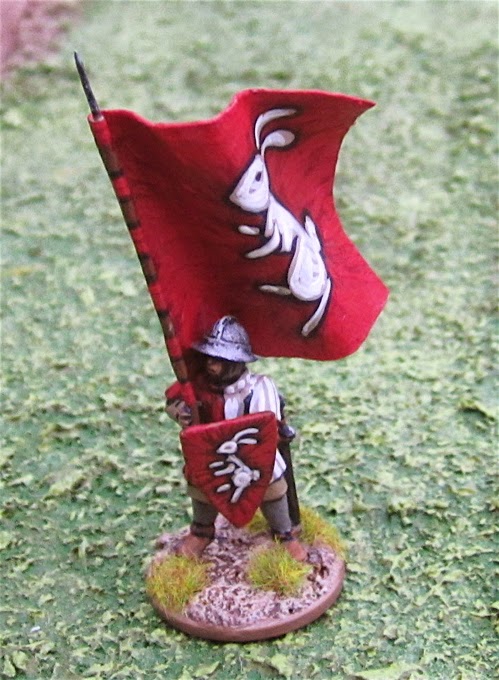 And we have a finished standard bearer.

Well I hope this has inspiring for at least some of you out there. Do please let me know if you find this sort of post useful – they’re fun to do – but time consuming (and time isn’t something I often find myself having a surplus of!). If you have any questions - fire away in the comment section below!

I will try to do this again sometime when I have a more complex or elaborate flag to do.

I’ll do a quick post of the finished unit shortly….
Posted by tim at 3:59 PM