Last weekend the copy of Walking Dead season Four I had requested through the public library arrived and I’ve spent most evenings for the last week watching (well… listening to...) that and painting – so it’s been quite a productive week – compared to the last few! 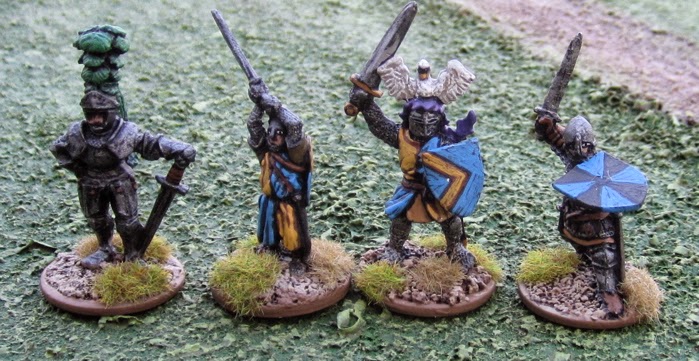 Assorted Men-at-arms, The two on the left are from Wargames Foundry, the next fellow is an old Ral Partha figure and the fellow on the right is either foundry again or an old Games Workshop Brettonian. 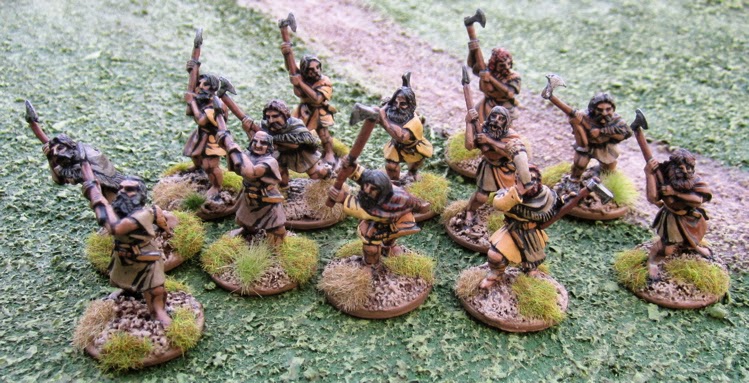 Looking over the suggested retinues in Lion Rampant I spotted the Medieval Irish one and immediately thought of the horde of spare Dark Age “Irish” I have left over and an even larger pile of Medieval Irish Kerns I got in a trade… so I busted them all out and prepared to paint them all – I almost have enough for a complete retinue without even having to buy anything! I got these Old Glory Irish Axemen done first as they were already primed and needed no assembling. This could be a unit of “Fierce Foot” but I think I’ll mix in some of the Kerns for some variety.

The medieval Kerns require drilling of hands and manufacturing of javelins and attaching of shields. Also I’ve been having a hard time finding any reference to how their shields should be painted. They’re oval and look like they’re made of wicker and possibly have leather stretched over them – but I have no idea how they’re to be decorated – if indeed they’d be decorated at all!? 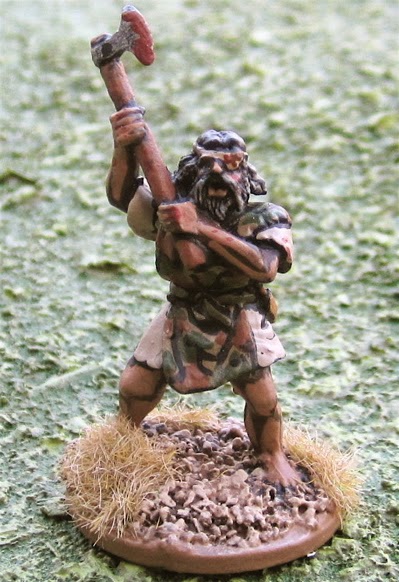 A spare Dark age Irish figure (as above) that I’d actually started earlier and just finished up. After our first game of Mutants and Death Ray Guns I’d gone looking through unpainted spares trying to find anything I could convert for use as post-apocalyptic characters. I didn’t do much converting on this guy - I did glue on some mag-pouches on his belt at the back – then tried to paint him to look as though he has a bit of camo tarp draped over him… 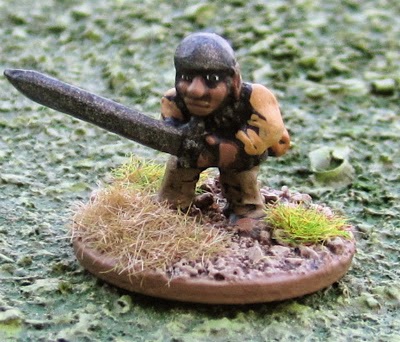 An Hobbit. Old Citadel/Games Workshop figure – I thought I’d finished them all. Then I found this one.

It just occurred to me that I never did post that game report from the last battle at John’s house… I shall endeavor to rectify that this weekend.

A few parcels arrived this week with goodies for me! First an order from North Star Figures with a Lion Rampant deal (and a few other things) I picked up. Second was an order from Brigade Games I placed during their Clack Friday sale last weekend (Yes – it’s already here!?) which was mostly some of their Great War British which I will be suing for the units of the 9th Infantry Brigade, CEF.

I now have all the figures I need for the 3rd Canadian Division. Half of them are already painted – so I’m going to see if I can’t just finish off the Division by the end of the year – then, next year, I’ll do the 2nd Division and get cracking on some of the Germans!

Despite the fact that I’m trying to stay focused on Great War and Ancient (Greek/Roman) subjects – and trying to lay off the Medievals until summer... I have a feeling there may be some of those rolling off the workbench in the neat future.

I also started clearing off the Game Table – which has become utterly cluttered over the last couple months – so I can get playing some actual GAMES here soon!!
Posted by tim at 4:23 PM