A few weeks back I wandered over to John’s for one last game in his beautiful new house… before he moved out of it!

We set up a game of Wargaming Nineteenth Century Europe 1815-1878 and, as per custom, I took the Austrians and John took Russians.

(I had secretly hopped he might bust out the Russo-Japanese war stuff – as our first game had been with those figures – but I’m not complaining, any game at John’s house is guaranteed to be a good time).

We played the standard “Pitched Battle” scenario and, for once, actually ended up being able to set up on the long sides of the table.

To win one had to be in possession of three of the four victory locations at the end of the fifteenth turn.

In the “Pre-Battle Events” I rolled “Bogged Down” and lost two units. John rolled “Traffic Congestion” and three of his units would not arrived unit turn five. 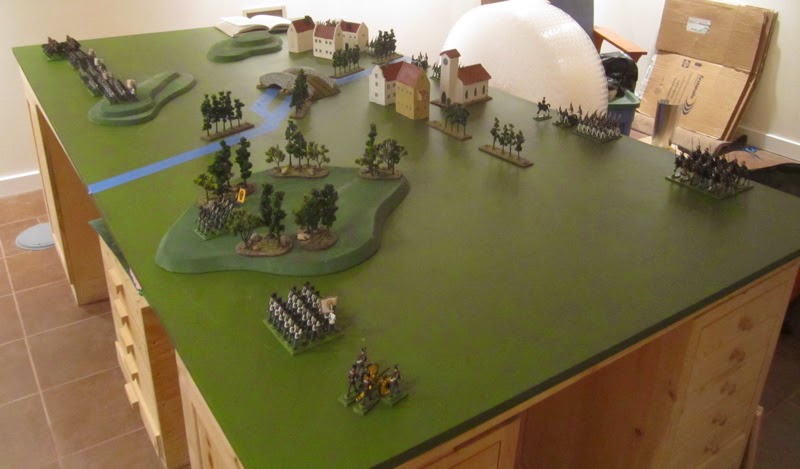 Initial set up from the Southeast – my Austrians are deployed on the south edge of the table. 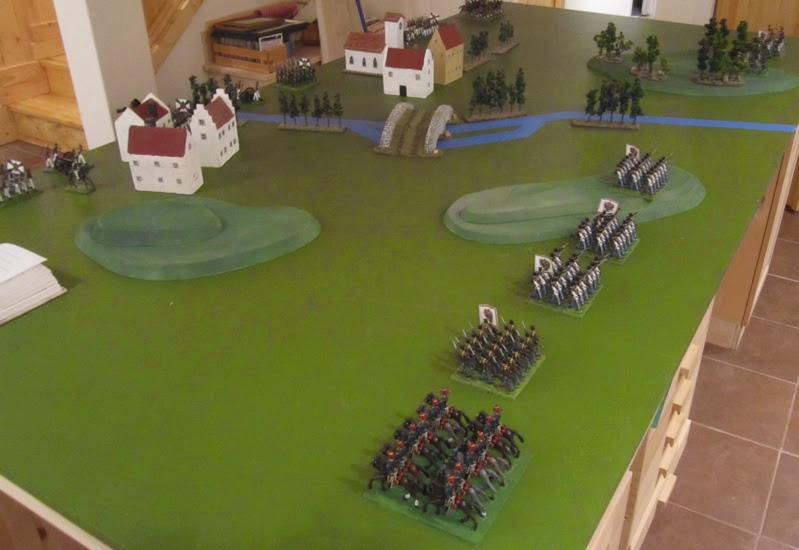 Initial set up from the Southwest. 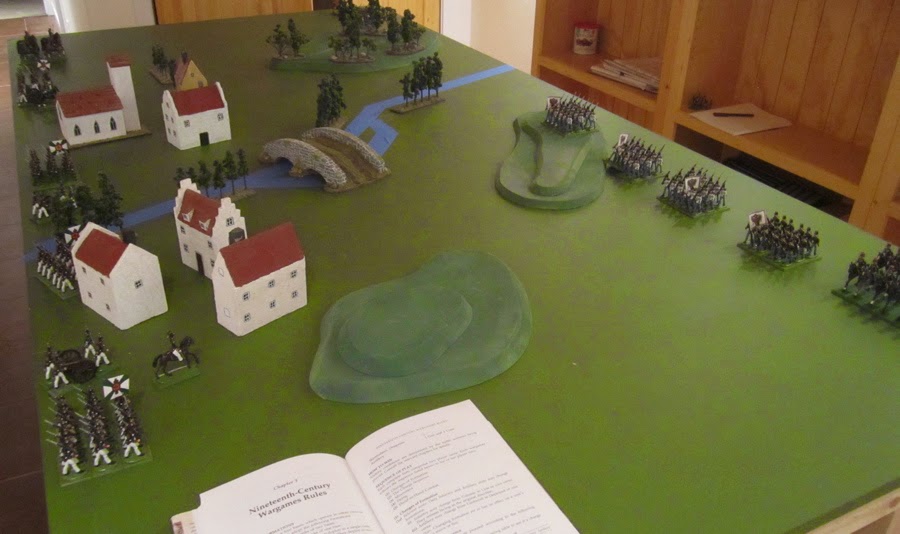 Again with the initial set up – from the Northwest. 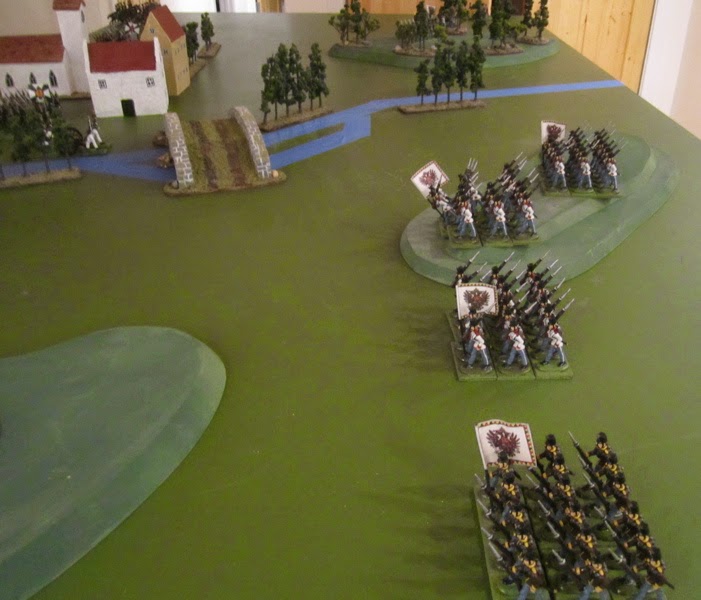 The Austrians begin their advance. 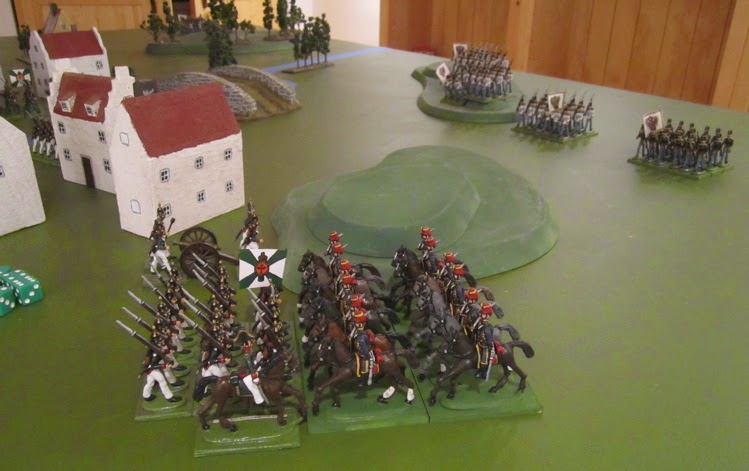 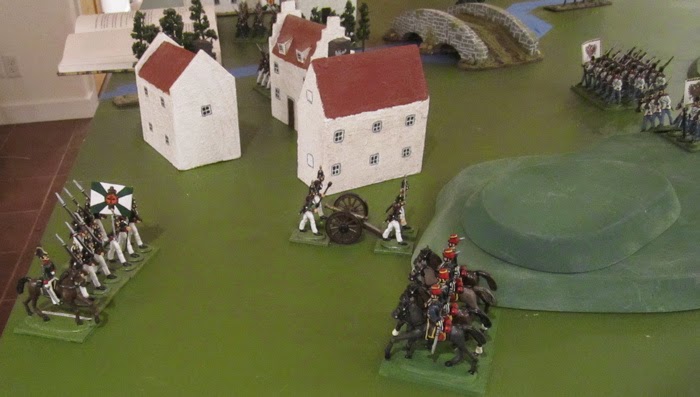 … nearly pushing them right off the table with the first clash! I tried to take the battle to the Russians as I know I would only have slight numerical superiority for the first five turns… 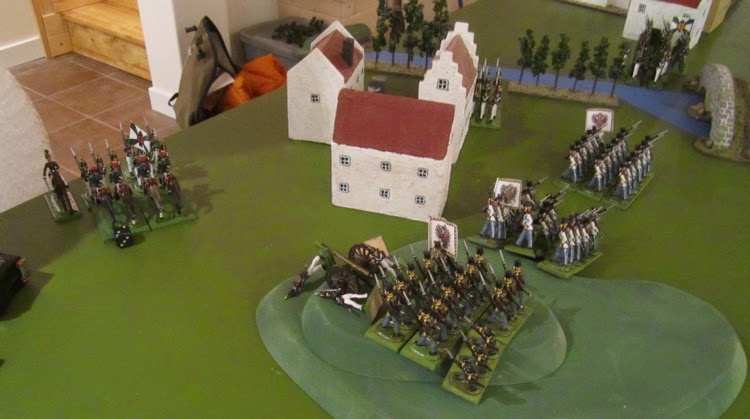 So fast was my advance that my infantry overran Russian guns before they could even get set up on the hill! Huzzah! 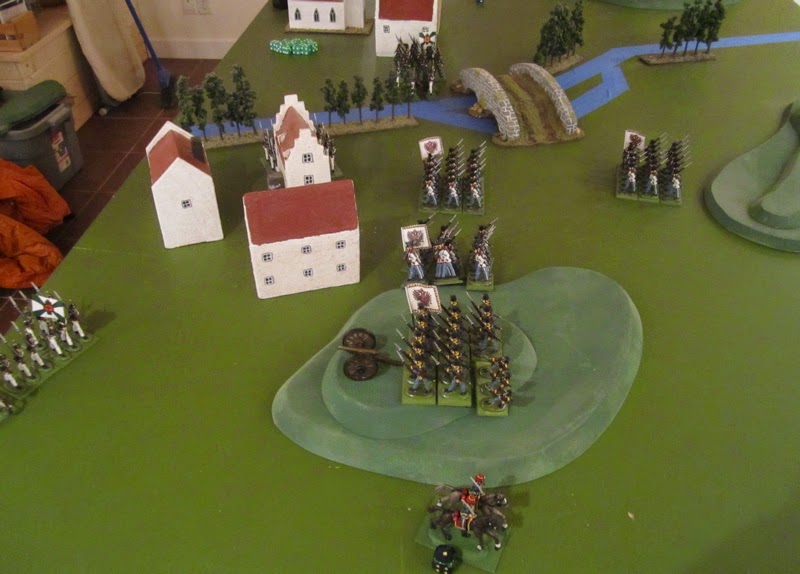 The remnants of my cavalry fleeing from their second clash with the Russian Infantry west of town. 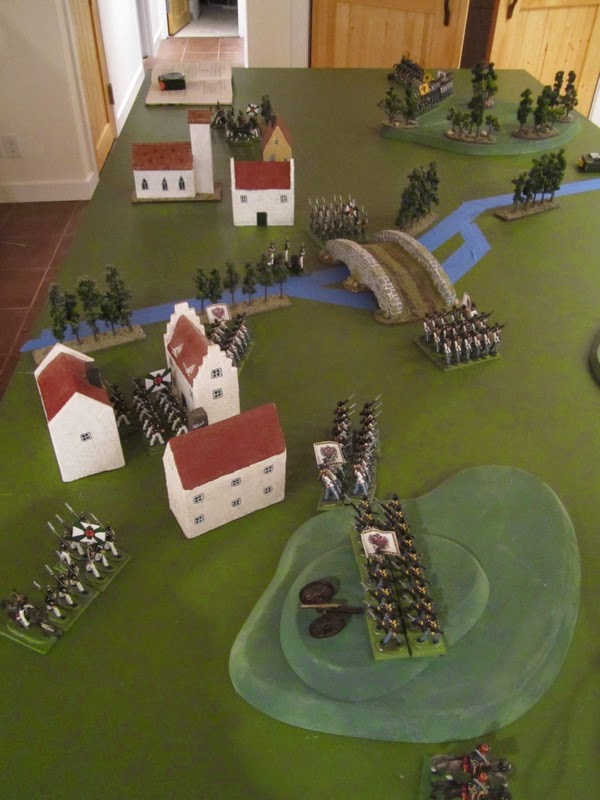 In the foreground I have three Infantry units converging on the town – one of the victory locations (of which there were four..? Two hills and two villages?). Another Infantry unit is eyeing up one of John’s units across the bridge spanning the river wondering how they’re supposed to cross that thing according to the rules. In the distance I have a unit of cavalry and a unit of artillery facing some Russian Cossacks. Oh, and my Skirmishers are on the wooded hill sniping at some of John’s infantry on the outskirts of the village on the other side of the river. 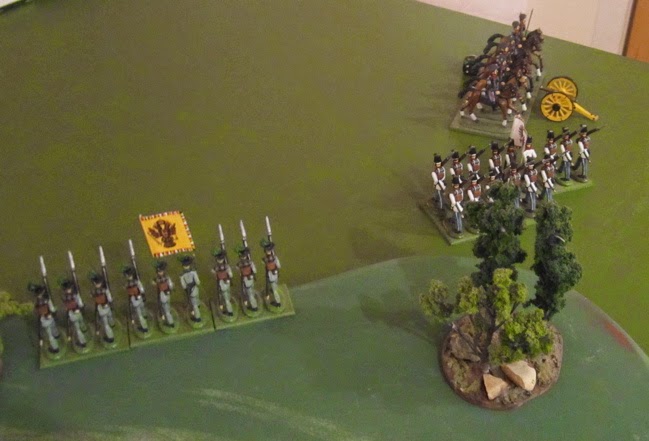 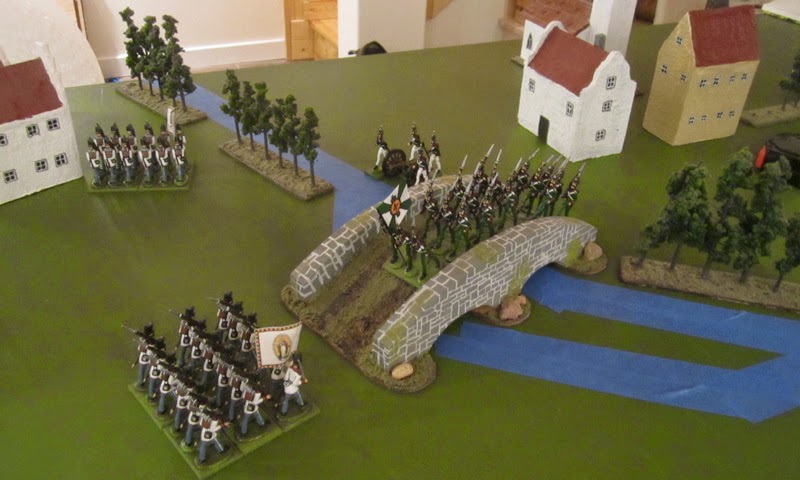 The Russians finally decide the best way to go about crossing the bridge is in column of march! 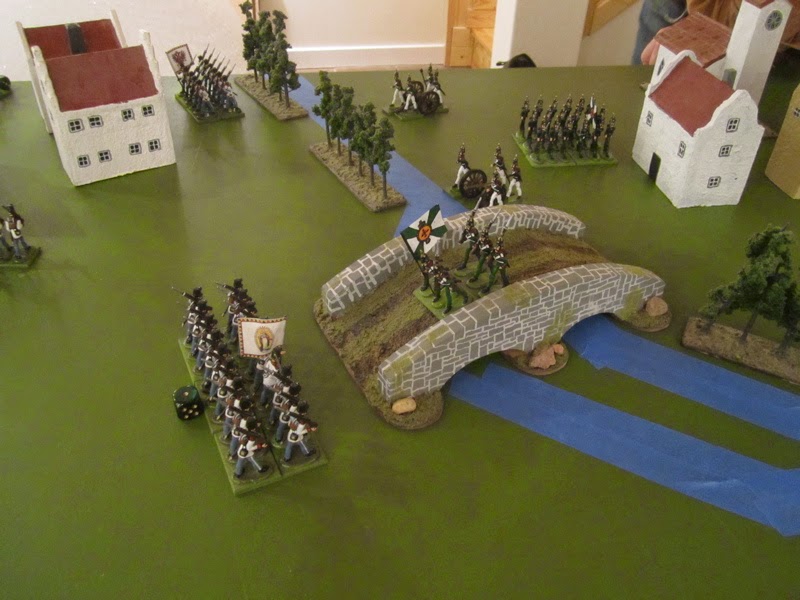 This leads to their near annihilation at the hands of my deployed infantry. 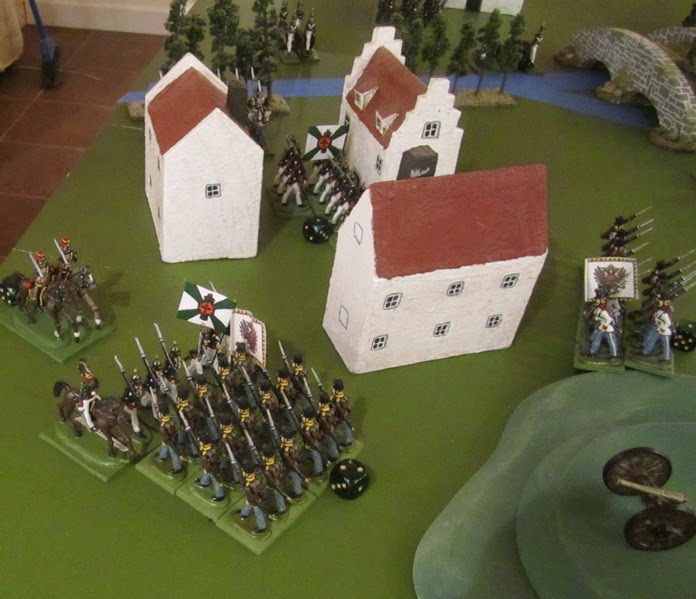 Austrian infantry sweep down off the hill and smash through the wavering Russian line.

Then I got kind of lazy with the picture taking… all these were taken BEFORE the fifth turn when The Russians reinforcements show up… the next pictures are many turns later…? 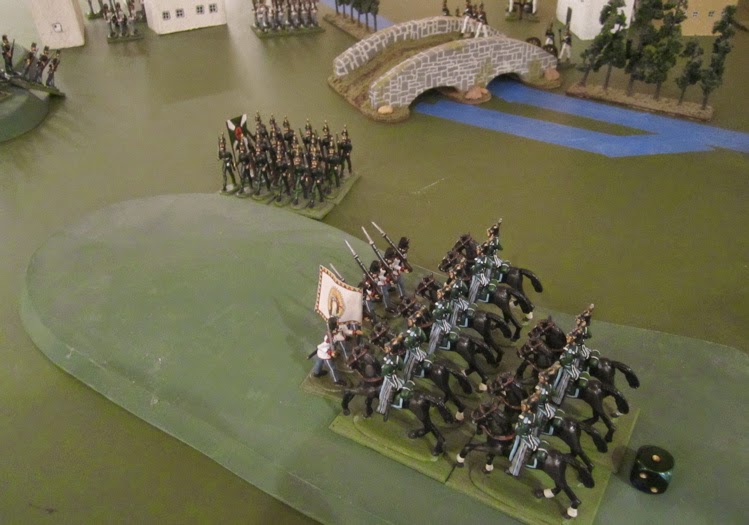 That full strength Austrian unit that was holding the bridge…? Yeah, that’s them not backed up to the hill (another victory location) being charged by Russian Reserve Cavalry That cam one on the fifth turn and galloped all the way around the flanks to try and take that hill in my rear. The Russian Infantry that’s just crossed the bridge is one that also came on from reserve. The Russian gun set up just on the far side of the bridge is also one that came out of reserve on the fifth turn. 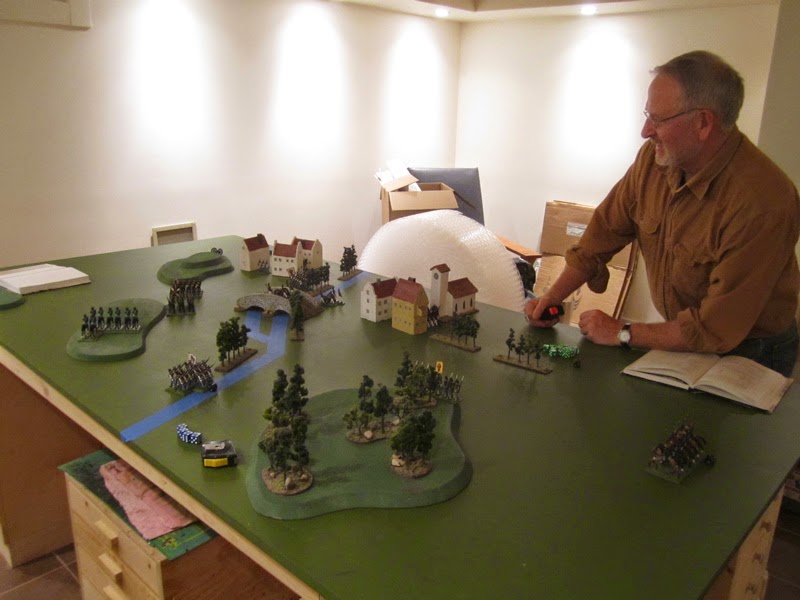 John and his fabulous game table full of toy soldiers (with bubblewrap for the immanent packing in the background!) 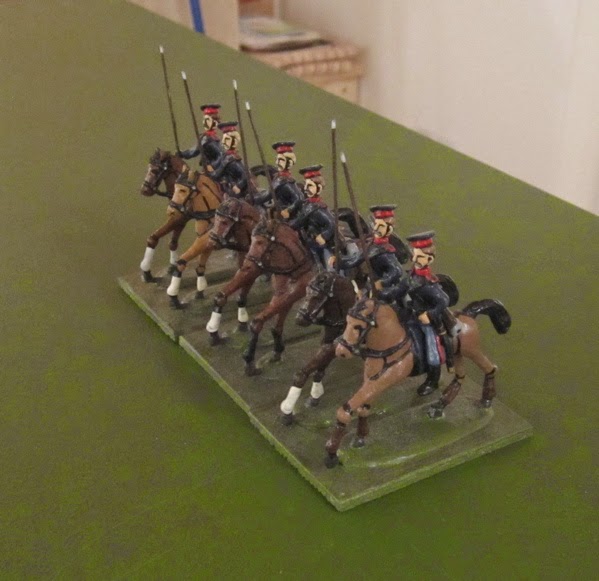 The remains of the unit of Russian Cossacks (after charging down the gun) They kind of held the extreme left of the Russian line and mostly just hung out to make sure my skirmishing Grenz didn’t try to pull anything funny as some of his other troops pulled out of their positions opposite to go and try to reinforce their wavering right.

The Russians are always supposed to get 1-2 free units of Cossacks – this is the first game we actually got to play with them (as John hadn’t has any for our previous games)! 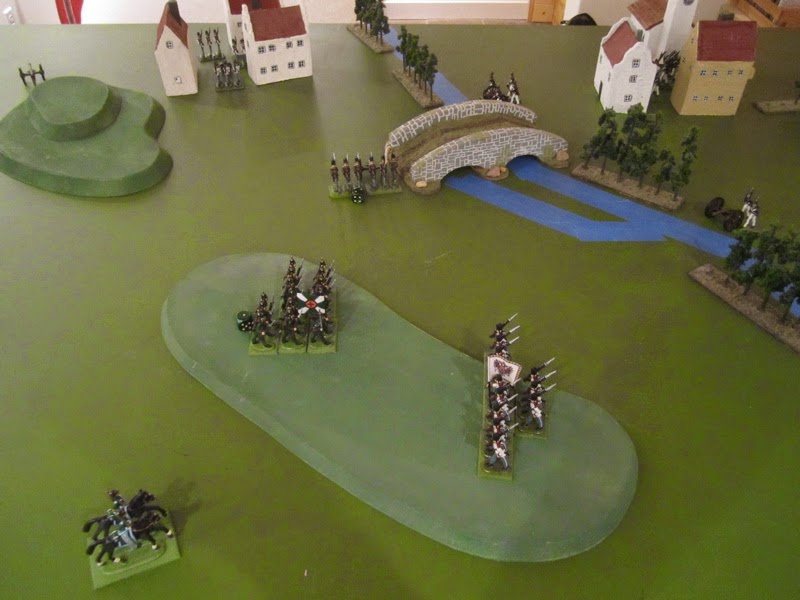 The end of the game.

I think technically the Austrians won. They held a village and the wooded hill. The Russian held the other village but this hill was still somewhat contested at the end of the fifteenth turn. I didn’t take note of the losses at the end of the game – but it was a pretty bloody battle and I don’t think the Austrians would have been able to hold onto their victory locations for long had it continued...

Good times. I’m going to miss these games. Hopefully I’ll get John over here for a game or two before he takes off for good.

I did get a bit of painting done over the weekend. Mostly Medieval subjects… but there’s some more Great War stuff on the workbench…

This week I hope to get in a game of Galleys and Galleons – so stay tuned for that report!
Posted by tim at 5:05 PM