We got in a few more games this month! This was mostly because of the lifting of some of the Covid Restrictions and most of my friends now being fully-vaccinated! 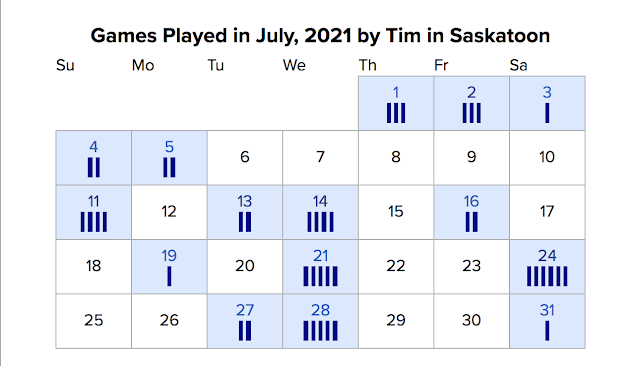 The games we played over the long weekend (1-5 July) were covered in the Long Weekend Gaming post. 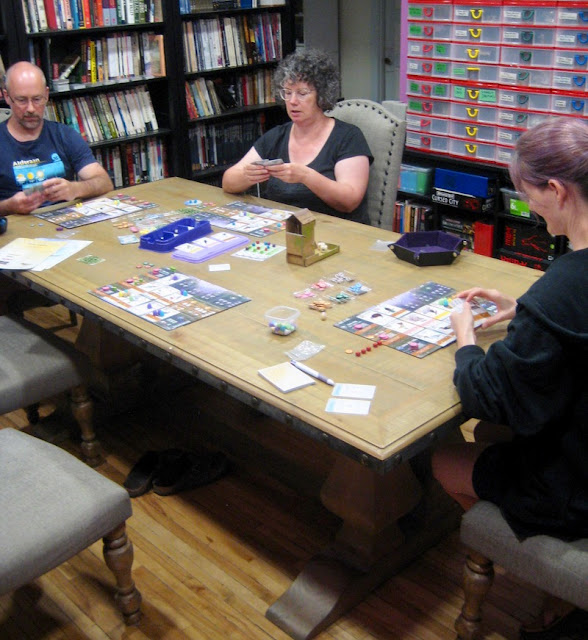 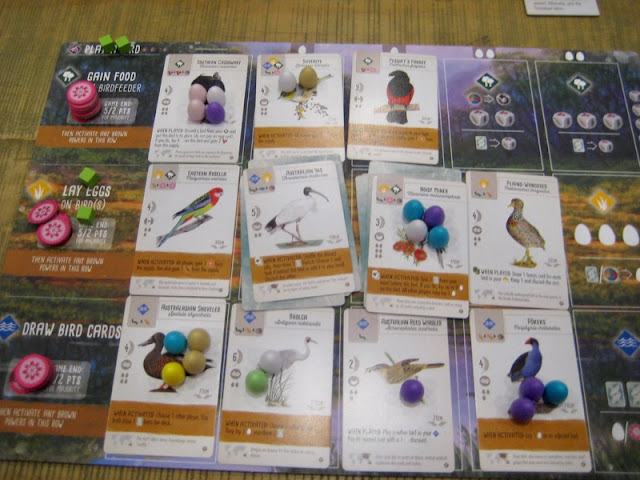 The first was with the Oceana expansion - with just the Oceana birds. 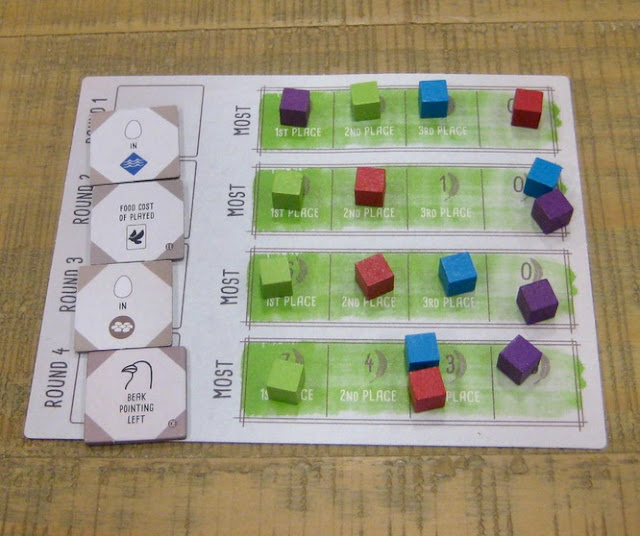 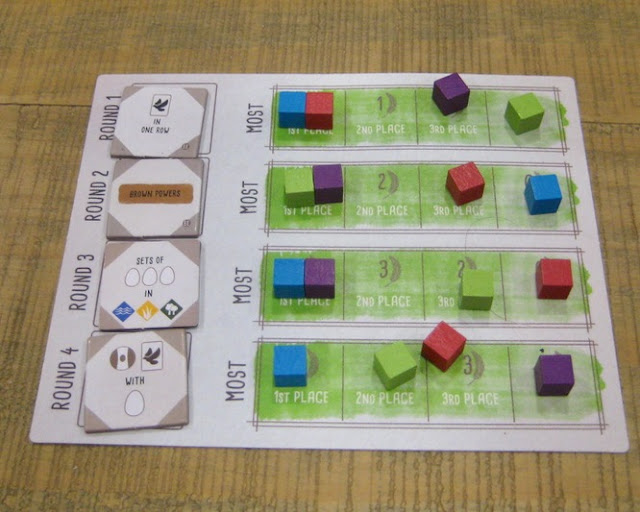 In the second game we tried playing with he Oceana board but with the Euro Expansion cards. 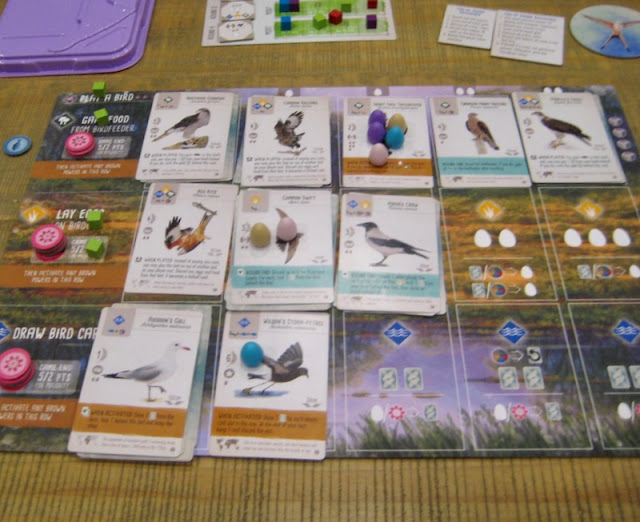 I noted that playing the expansions with four people - we tended to run out of cards as the expansion decks are half the size of the deck in the base game. Eventually, we'll probably just end up playing with ALL the cards mixes together and the Oceana boards... 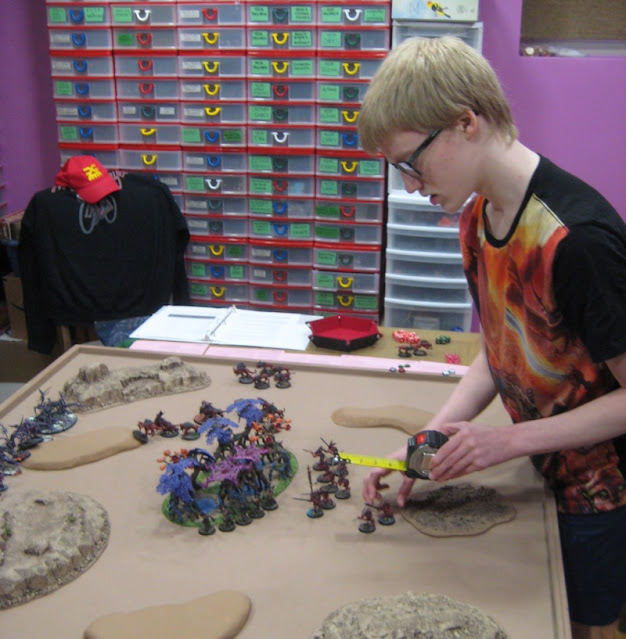 On Tuesday, Finnegan and I tried out our first game of Age of Sigmar!

You can find more pictures and a complete report of the action here: 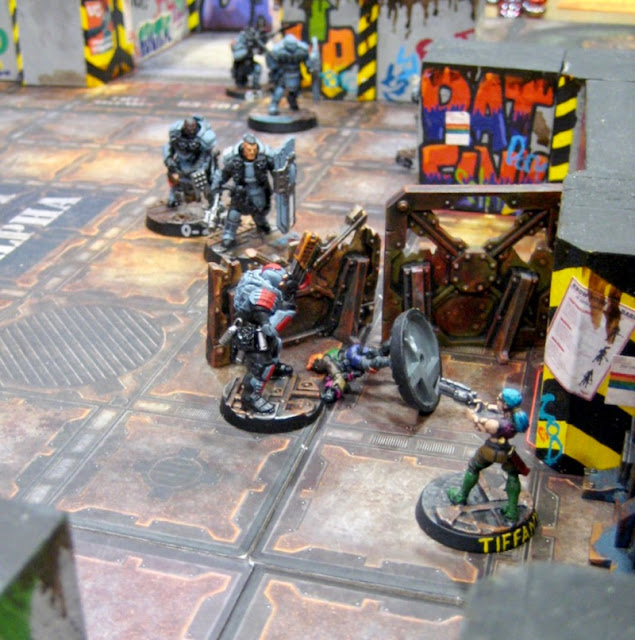 The following day I played my first game of Necromunda in over a year! Woo! I forgot how much I loved this game.

Again, more pics and a complete report can be found here:

Back to the Underhive 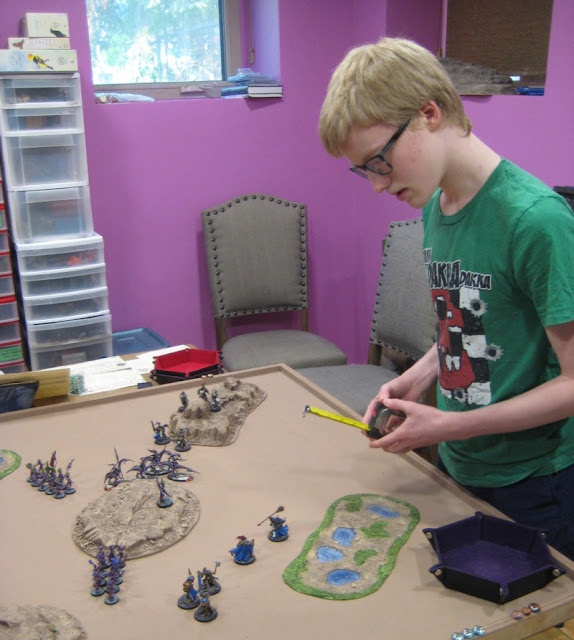 After the game earlier in the week, I was super excited to get a Paths to Glory campaign started, so on Friday, Finnegan and I kicked off a campaign.

More on the campaign and the game can be found here: 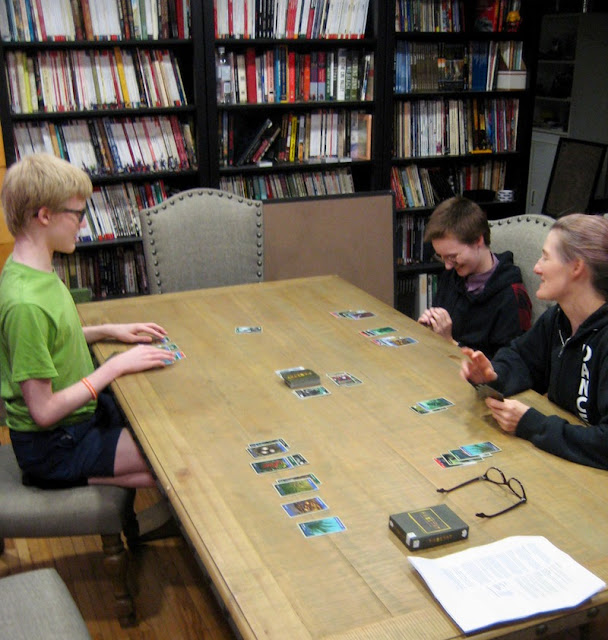 On Monday, I actually got the whole family to play HABITAT! It's been a few years since we've played, but it was easy enough to pick up again and play. It's super fast and it's a GREAT game for learning about... well... Habitats!

This was part of Helping Keiran catch up on some of the Grade Nine science that kind of fell by the wayside over the skewl-year. We have a few more science-y games I'm hoping we'll get to play through August. 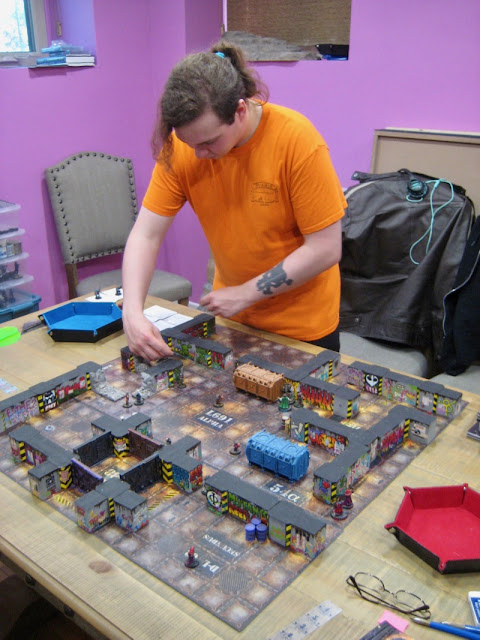 Necromunda again. It seems this is becoming a regular Wednesday thing... which just delights me!

More about this game here:

Necromunda - The Fiery Wrath of the Redemption! 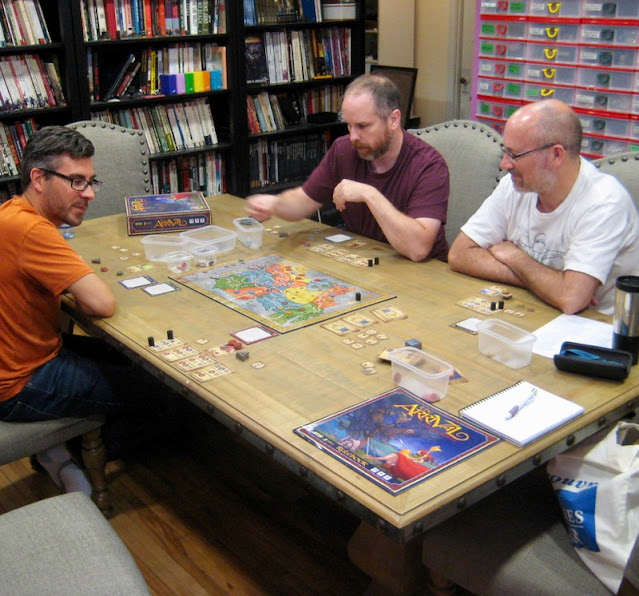 Saturday Kurtis, Brent and Jason were looking to play a game so I suggested we try out The Arrival! I'd found out about the game when I was looking for games to play with the kids while we were Gaming Our Way Through History. The game isn't historical, per se, but PART of our study of history also involved looking at the Myths of various cultures throughout history and this in based, loosely, on Irish Myth. At the time, however, the original printing was exceptionally difficult to track down.

A year or two later, Cryptozoic Entertainment rereleased the game and I snapped it up... of course we were done with the Gaming our way through history, so this kind of sat for a few years... 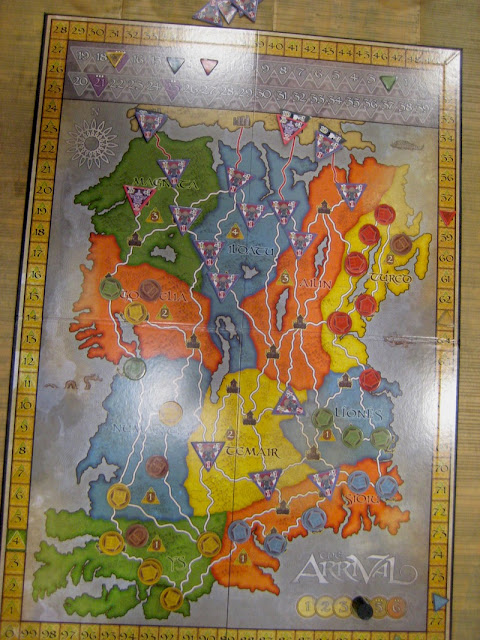 Anyway, lots of moving parts in the game and things to keep track of and different ways to win or gain advantage. I would definitely like to play this more. 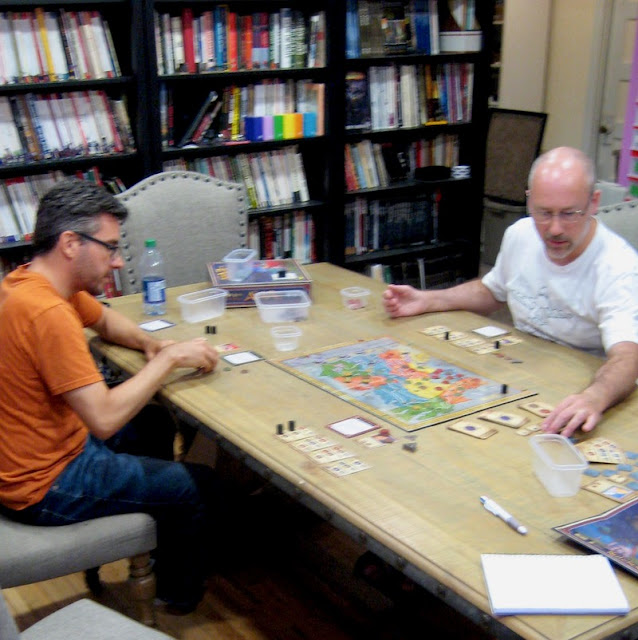 After our first game, Jason had to take off, but Brent and Kurtis stuck around to play a second game.

In the evening, I was supposed to meet up with the Saturday night guys... but most of them bailed and I was feeling a little bummed out... 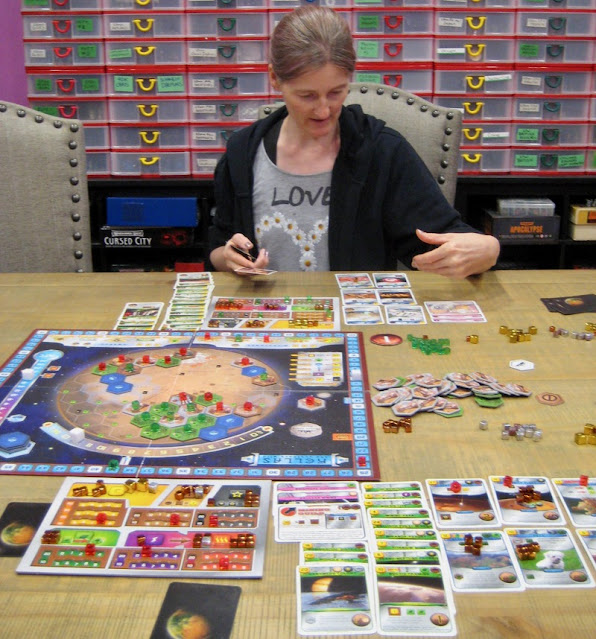 So Amanda thought beating me at Terraforming Mars would cheer me up... 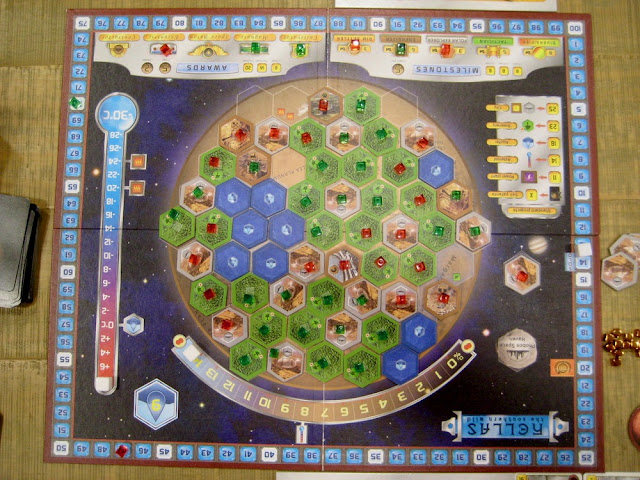 I have to say, she played an exceptional game and actually DID some terraforming (she was green!). Usually I cover the board with cities and greenery and raise the temperature and make oceans all by myself... and then she wins with, like, a PILE of points on the dozens of cards she puts into play... 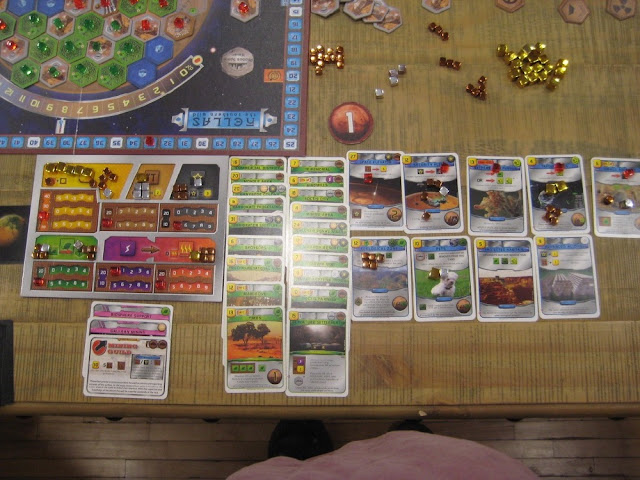 I felt like every time I did a thing, Amanda was always 10 steps ahead of me. I gained one greenery production  brining me to four (every other turn I'll be placing a Greenery hex tile), only to look up and see Amanda's at 14!? GAH!?

In the end it turned out to be a REALLY CLOSE GAME - because, for once, I had a pile of points on cards I'd put into play (like, FIFTY points!?) but, unlike when Amanda does it, it was nowhere near enough to catch up to her amazing lead.

Despite feeling like everything was going wrong for me, it did kind of cheer me up... I like playing the game - even if I lose most games. 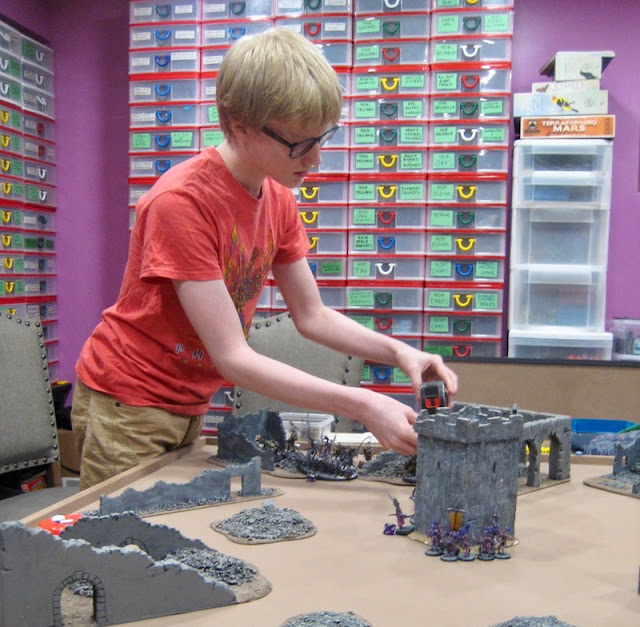 A second battle in our Age of Sigmar - Paths to Glory campaign.

Game report and pictures can be found here:

Age of Sigmar - The Tower 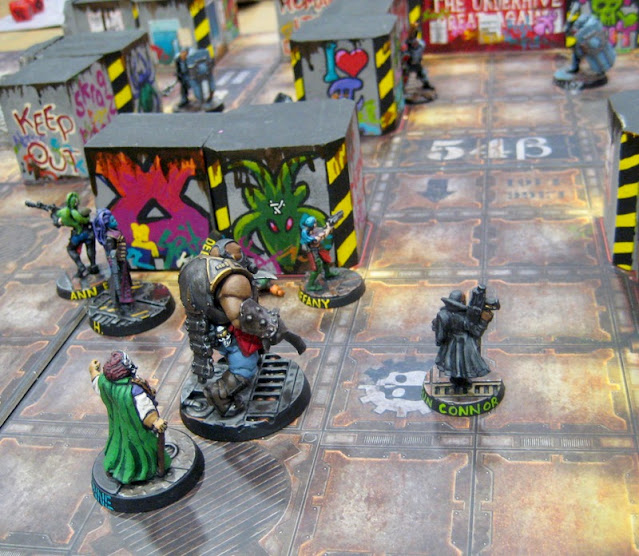 And another game of Necromunda - this time Orion brought along his partner Nic to try the game out!

Necromunda - On the Way to the Fighting Pits 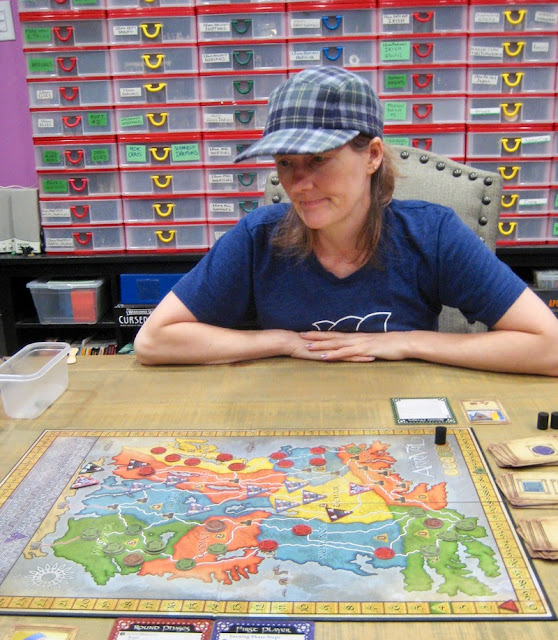 One last game for July - Amanda said she wanted to try out The Arrival.

I think she found it a little frustrating as she would say, "so you want to do this..." and almost all of my responses "well... it depends..."as with a LOT of Martin Wallace games, while mechanically being quite simple and easy to pick up, there are a LOT of moving parts to the game and a LOT of different ways to achieve different goals and different ways the game ends and different things that determine victory... so... taking out my castle MIGHT be to her advantage... but it might actually give ME an advantage... There were SO MANY possibilities to explain that could come from any action taken...

I like it. I haven't quite wrapped my head around the best way to go about things. I think it would be next to impossible to win with low corruption in a four player game - unless EVERYONE was trying to stay as small as possible and expand Fomori everywhere... without killing any of them...?

Looking at the Game Plan 2021 - Q3 I didn't really have a super clear idea of what I was going to do for a 5x5 Quarterly challenge. I had initially suggested:

Looking at what I've played this month, I think I may modify that somewhat....

Those are definitely three of them... I mean, I've played FIVE Games of Wingspan already!? Maybeit shoudl be dropped from the "Challenge" as it really doesn't seem to BE a challenge to get games of that in... but what else... The Arrival...? Terraforming Mars....? I've already got two or three games of each in and wouldn't mind playing more... "Science Games"...? I'm still interestred in getting back to playing Warhammer Underworlds and still haven't given up on Warhammer Quest: Cursed City! Maybe I'll have to wait and see how august rolls out...
Posted by tim at 11:05 AM