Again with the Ronin


I played my first miniature game of the year Saturday evening. Rick and I threw down with a game of Ronin – Skirmish Wargames in the Age of the Samurai. I wanted to try out one of my new Buntai (either the Sohei or the Ikko-Ikki) against the tried and true Bushi Buntai.

Rick wanted to try out the Sohei so I took a Bushi Buntai to battle against him.

The game was to last 11 turns!

The game was a rather short affair… 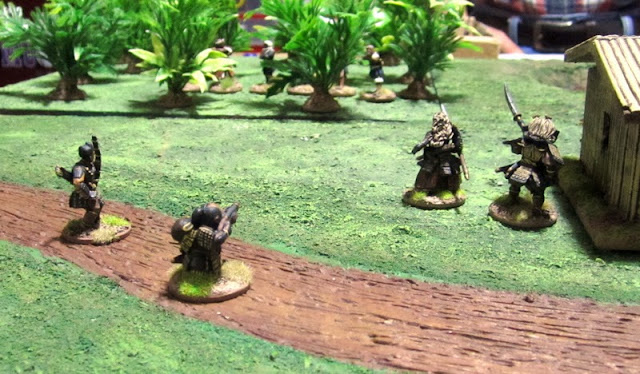 I think this was about Turn Two…? 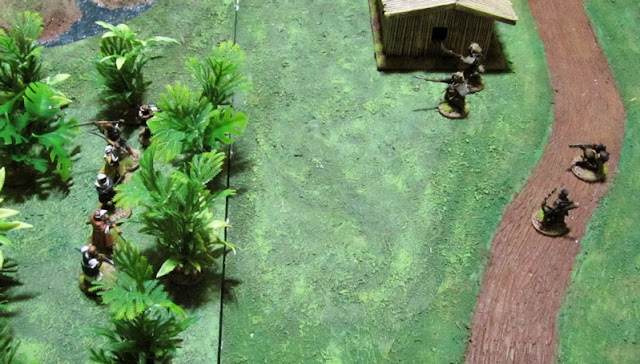 Same turn I charged down off the hill towards the wooded area where Ricks monks were hiding.

His plan was to draw me in without exposing his troops to any fire from mine. 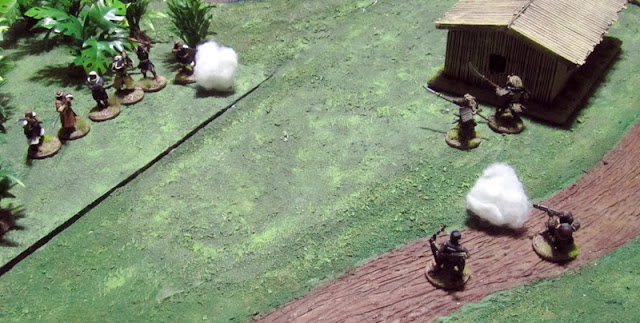 Teppo gunners and archer exchanging shots around turn three – I keep forgetting to add in the SHOOT value!? 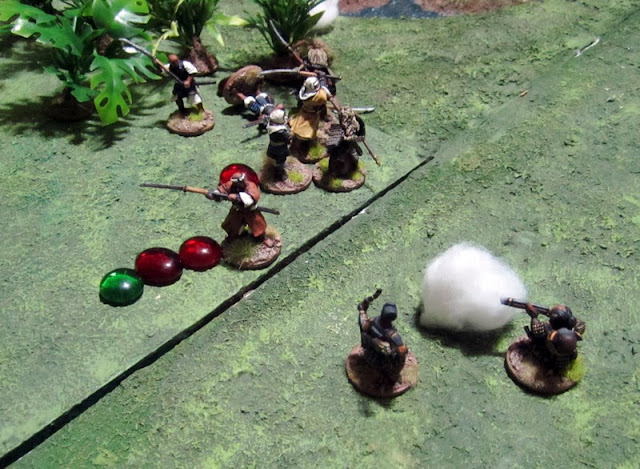 Around turn Four or Five, my Bushou and Hatamoto charged in and laid the smack down. The Bushou wounded the Grand Master – holding here own against him and a Sohei.

My Hatamoto took down two initiates and still have attack tokens to spare… If I’d remembered to mention it he could have taken one of their heads for a bonus Victory Point.

The Teppo gunner grievously wounded the other Sohei – If I’d remembered to add in shoot values that would have been a dead Sohei.

At that Rick called it a game and conceded.

Teppo-armed Samurai with Hojutsu are nasty! NASTY! Kyujutsu is pretty wicked too! Those attributes are so worth the three points. I’d originally taken the Bushou, Hatamoto and three Samurai -  mostly without any abilities or weapons other than katanas. I then decided I’d rather have one less and max out on the abilities. I definitely think they are worth it. We discussed at length how to take down such a buntai. I guess perhaps different scenarios where it’s not just going at it toe-to-toe…

As I mentioned Rick's plan has been to try and hid in the woods to avoid my archer and teppo and "draw us in". I think the best plan against a buntai like this is Mr. Miyagi's suggestion from one of the Karate Kid movies; "Best Defence: No Be There!" Avoid close combat because they will MESS YOU UP! I'm wondering if the best counter to this buntai would be to take lost of shooty things and keep your distance...? "Long Distance: the Next Best Thing to Being There"and all that...

I am curious to try the Ikko-Ikki against a hard-hitting Bushi Buntai such as this one.

I’m going over to John Betolini’s to play some more Wargaming Nineteenth Century Europe 1815-1878 - he apparently has a unit of Cossacks finished – which I am very excited to see in action!

I really hope I might be able to get in a couple more games of Ronin through the week while Amanda and the kids are away! I suppose I could always solo a few games…?
Posted by tim at 10:42 PM