As mentioned previously, some bobbies: 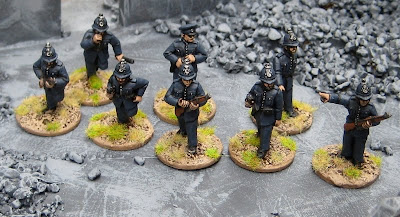 These chaps are all from Artizan Designs’ Thrilling Tales line. Ready to catch criminals (sometimes, perhaps, with the aid of a Consulting Detective from Baker Street) or put down insurrections between the wars or investigate strange occurrences of tentacles or round up fallschirmjägers dropping on London!? There’s a few more with Rifles, now, that I’d also like to pick up… sometime…

A dozen Diggers (or so) should be finished up by tomorrow. Then I’ve got a Giant, an Elf Wizard, and a Universal Carrier on deck. After that I’m going to try and get on to some GERMANS(!)… but I’ll probably end up finishing off the platoon of Regina Rifles…
Posted by tim at 8:00 AM