A little armoured fire support for the Heer!

I had for a moment thought I’d title this post “At Last Some Elves”… just to fake out those waiting for me to get back to HOTT. But lately I’ve been looking back through the blog to find pictures of games or minis I posted over the last couple years and it’s really darn hard to find stuff when you use misleading of vague post titles! 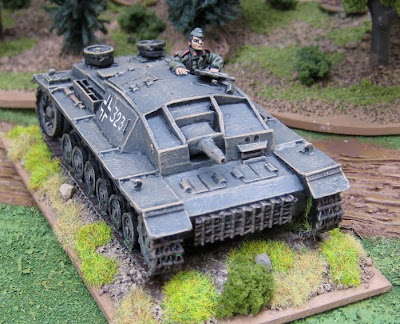 This is a Stug IIIC/D fromArmy Group North Miniatures. Nice Model. My only complaint would be that it would have been nice to have a little diagram to see where all the little bits and bobs were supposed to go.

The commander is not from AGNM (at least as far as I know!). I got it in a lot of assorted drivers and commanders. He was actuall a driver of some sort wih a sterring wheel in his hands. I carved his arms off and made new ones with green stuff… 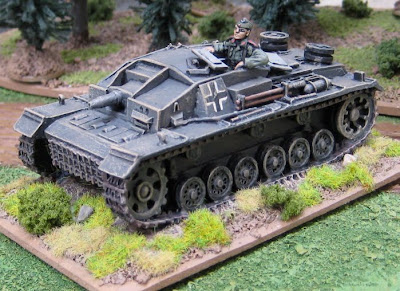 While this will be fun to bust up some Barbarossa Bunkers on the Stalin Line, I think I’d like a Stug IIIG (or two!) if I were to pick up some more. Does anyone make one…!?

I was thinking I might lull the players in my east front campaign into a false sense of security this evening by telling them they’ve finally met up with some friendly forces on the Stalin line… give them a nice hard bunker to hold… then come and blast them with the Stug – new toys must always be tried out! We shall see…

Did I say something about Bobbies, Diggers or Elves…? Hmmmmm…. How about some more Canucks or Commandos…!?