A few more odds and sods rolling off the painting table… 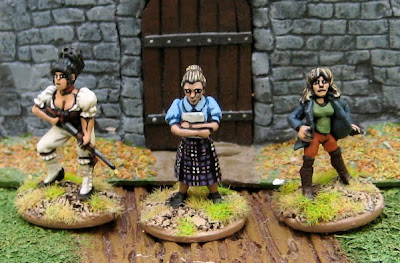 From left to right we have: a “Wild West Women” from Shadowforge Miniatures, a script girl from Pulp Figures Movie/Film Crew, and a figure that I’ve had forever and just decided to repaint (entirely) – I think I actually got her as a part of a box of Dr. Who miniatures produced by FASA…? Or Maybe GW for FASA…? I don’t know – it was 20 years ago!! 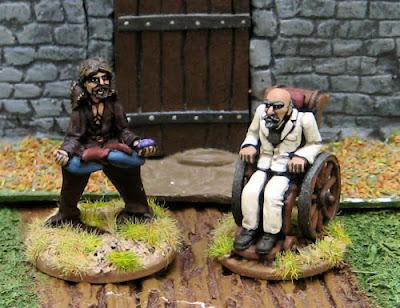 From left to right, again, we have: some weirdo I have no idea when it came from… might have been something I got in a trade from Bob or The Teenage Visigoth, or something Jolo gave me at some point… or I may very well have just bought it years ago and had it in storage… anyway, no idea of the manufacturer (though I have a funny feeling it might be Grenadier... I don't know... it sort of has that "look"), supposed to be some fantasy wizard of some sort but I thought it would work fine as a pulpy mystic/cult leader of some sort. Then we have some sort of “Scientific Mastermind” from Pulp Figures

Japanese… really – whole squad nearly complete, probably finish them up tonight and post tomorrow. I’m a painting fool!! There's very little else ON the painting table right now. Last week I cleared it off and decided to only have one or two project batches on the table at a time - it's really helped to stay focused on one thing.
Posted by tim at 8:57 AM