As promised here are the War of 1812 Militiamen I made. As with the British Infantryman I had a lot of miscasts – I’d cast over twice as many as I’ve painted here (and some of these even have flaws). I think I figured out what the issue was and hopefully next time I get to casting I won’t have so much trouble! 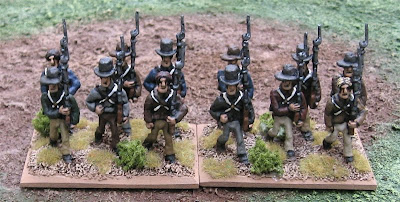 1812 Militiamen modeled, moulded, cast and painted by yours truly. 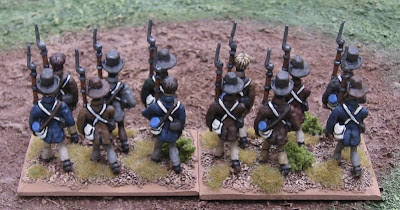 Unlike the Regular Infantry which I am basing 8/base, these fellows I’ve decided to do 6/base. Mostly because as militia I imagine they weren’t drilled as well as the Regulars and their lines would be a little more loose.

These could really be from either side of the border, but in my minds eye I imagined them being from Upper Canada… 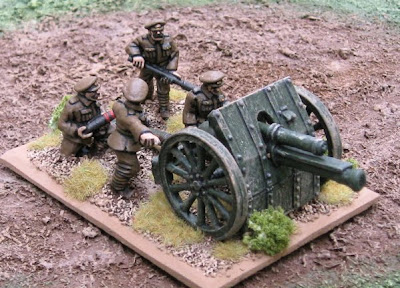 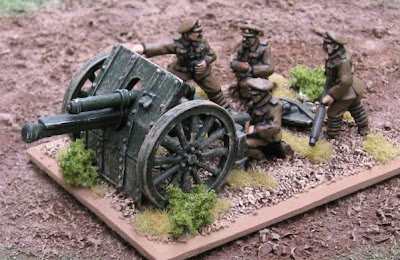 This is a Renegade Miniatures early Great War Royal Artillery 18-Pounder QF Field Gun. I have a second one on the work bench… I’d tried to do them both at the same time, but got bogged down on fht efirst gun and just wanted to finish it up quick to keep the momentum going… hopefully I’ll keep it going enough to get the second gun finished…

Anyone know what type of shell that gunner is holding?

I have a PILE of Great War Highlanders that I finished up last night. You should be able to see them posted at Analogue Hobbies shortly… What those Jocks need is an officer. Renegade doesn’t (currently) make any Highland officers. I do have some spare Renegade British Officers and I was thinking I could paint one in trews. Can anyone out there confirm or deny that Higland officers did such a thing…? I’m pretty sure I read in Wellington’s Highlanders that officers in kilted regiments during the Napoleonic era often (or were even required to?) wear trews – because they often had to ride horses. Was this regulation/tradition carried on into the Great War…? I may just do that anyway… of course I’d probably have to do some converting as all those officers are in SD caps and the Highland officers would probably have worn Glengarries or Balmorals…

Ugh… too… many.. late… nights… I’ll post them tomorrow… and then I’m going to have to take a break from the late (like up until 2am) nights… I gotta slow down and pack myself here… (although it would be cool to finish up 1000 foot figures this year – only ~150 to go… seven days… 20/day….? I COULD probably do it… of course it would mean ignoring my family for the week…)

On the workbench I do have some more 1812 British Infantry and Militia (had a bit better success with the second lot of casting.

I also have some 20mm WW2 stuff I was admiring TimmyD’s entry to The Challenge and thinking I didn’t have much to finish up my (re-organized and re-based) Para battalion. 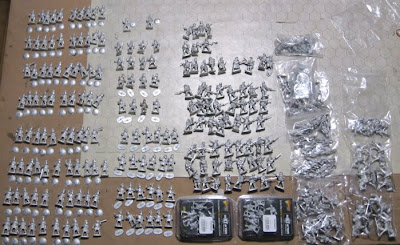 Happy Whatever To Me...

Two of my biggish orders arrived today! There's Renegade - mostly Great War Stuff and a few marching Napoleonic British - and there's North Star #2 - a couple of ready made armies for some game or another that I'm going to use to make a DBA Greek Hoplite Army and some Warlord Games partisan types... Huzzah!

I don't even want to think about how that's going to rack up my "purchased" column for this year, though...
Posted by tim at 3:31 PM